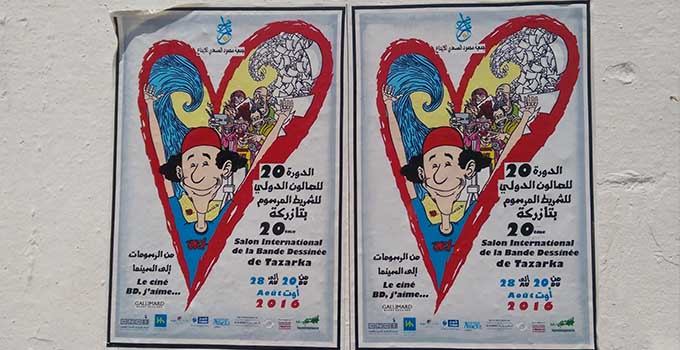 The International Comics Festival of Tazarka incarnates the adage dynamite comes in small packages. For the past twenty years, the seaside town of Tazarka has hosted Tunisia’s oldest comics festival. August 20-28, artists, children, and the members of the Association Mahmoud Messadi for Creation animated the workshops, discussions, and kite-flying of this year’s event.

“The main idea is not to consume, but to create,” explains Seoud Messadi, who launched the first festival in 1997 with the Association du Livre de Tazarka. This year, the organization handed over the reins to the Association Mahmoud Messadi for Creation, named after the famous writer who also served as Minister of Education under President Bourguiba. Seoud Messadi and those who run the festival point out that people do not come to be wined and dined or simply entertained. “You come to do, to draw, to paint … the idea is to teach children how to create.” For this edition, an organizing committee headed by Anis Messadi plus half a dozen artists (including Ikram Mhenni, Nada Ben Nasr, Moez Tabia, Elyès Selmene, Mehdi Ghalleb, and Rabeb Khammessi) worked round the clock for eight days to set up and run the activities—a roundtable on “Intellectuals and Modernity,” a film screening, a day on the beach for decorating and flying kites, workshops on illustration, painting, photography, comics and animation.

On the last morning, young, old, and in-between buzzed in and out of Sidi Belhassen, the local Boy Scout headquarters on loan for the week’s events. Attached to one of Tazarka’s two primary schools, the space, a small enclosed terrace in the traditional dar arabi style, was decorated with large foam-board posters featuring the comics of Chedly Belkhamsa, Néjib Belhadj Kacem, Sabri Kasbi, Moez Tabia, Nada Dagdoug, Seif Eddine Nechi, and others. Canvas-colored parasols and sail-like fabric billowing overhead blocked the sun’s penetrating rays and enhanced the sense that the whole scene was taking place on a boat at sea. 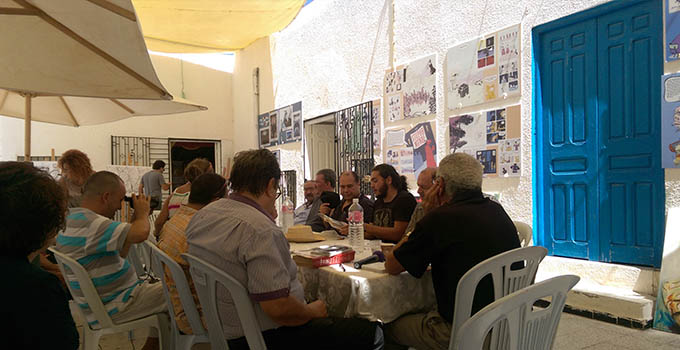 The blending of young and old appeared at once natural and profound. White- and gray-haired professors, illustrators, authors, and association members sat around the table interspersed with six, seven, and eight-year olds fidgeting in their chairs, bent intently over comic books, and fingering the books and magazines on display. The adults talked. Professor Majid Majoul discussed the history of comics as propaganda, a means to glorify US military intervention during World War II. Sharing the floor with his son Aziz, Professor Zine El Abidine Ben Aissa evoked Manga as a manifestation of and important influence in the world of comics. Illustrator Chedly Belkhamsa, who worked among the artists of Tunisia’s first independent comic magazine “Kaous Qouzah,” underlined the importance of reading especially for young people, and noted that people no longer keep personal libraries at home. Illustrator-author Sabri Kasbi chimed in with an anecdote of a child who once picked up a book and proceeded to slide his finger across the cover in an effort to switch the screen.

A new chapter for Tunisian comics

Later in the evening, Sidi Belhassen housed the comics, paintings, and photograms that children had produced throughout the week. The young artists and authors trickled in, many dressed up for the occasion to present their pieces, describe the creation process, introduce the characters, and recount the stories they had developed. On the large screen, an animated undersea scene featuring an earring-clad octopus alternated with a video montage of mentors and children at work.

What if we do a comics festival in Tazarka?

Matching the boundless energy of the fifty or so children who participated in this year’s edition was the youthful enthusiasm of the individuals who began the festival twenty years ago. More than twenty years ago, Seoud Messadi laughs. In 1994, Messadi and a group of friends—union members, some active in politics, others in the political opposition— founded the Association du livre de Tazarka. After carrying out a fruitful book-collecting campaign in which they amassed two thousand books, the Association created a Library of the Mediterranean.

And then Seoud was struck by an idea. He recalled reading comics as an early adolescent, and reading about the history and development of comics during his university studies. “… Pilote, Pointu, Tintin, Asterix … I said to myself, there are no comics in Tunisia, and yet comics are an extraordinary vehicle of reading for children.” What if we do a comics festival in Tazarka? Seoud talked to his friends and made phone calls left and right. He contacted Lotfi Messadi who ran a cultural newspaper at the time and was able to secure support for the project through a partnership with Belgium. In 1997, the Association launched the country’s first comics festival. “There were 150 kids on the ground, painting, drawing, doing watercolor,” Messadi remembers. “When we saw this, we knew we had to do it the next year. You can’t disappoint 150 kids.”

In the beginning, Seoud indicates that “Belgium helped us a lot.” Nonetheless, between 1997 and 2004, “we operated with the minimum possible because the Association didn’t want to enter into politics, either with or against the government.”  On two occasions, they applied for and were granted funding through the United Nations Development Program (UNDP) in Tunisia, but, due to administrative delays and bureaucracy, were only able to make use of the second award. With this two-year funding support, the Association published two comic books for children promoting the conservation of Tazarka’s beaches. 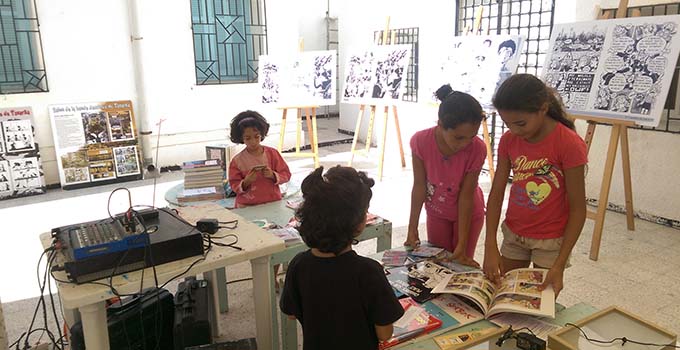 Messadi smiles as he recounts the history of the festival. Every year is different, funding is inconsistent, some editions are shorter, some more limited than others. “But even with its flaws,” Messadi concludes, “the important thing is that the festival continues.”