President of Ennahdha Rached Al-Ghannouchi, referred to by some as “Sheikh” (Muslim scholar), did not shy away from declaring a separation between religion and politics during the party’s 10th congress in 2016. Al-Ghannouchi labeled the decision as “specialization” whereby the party dissociates itself from religion and any use of it in politics. 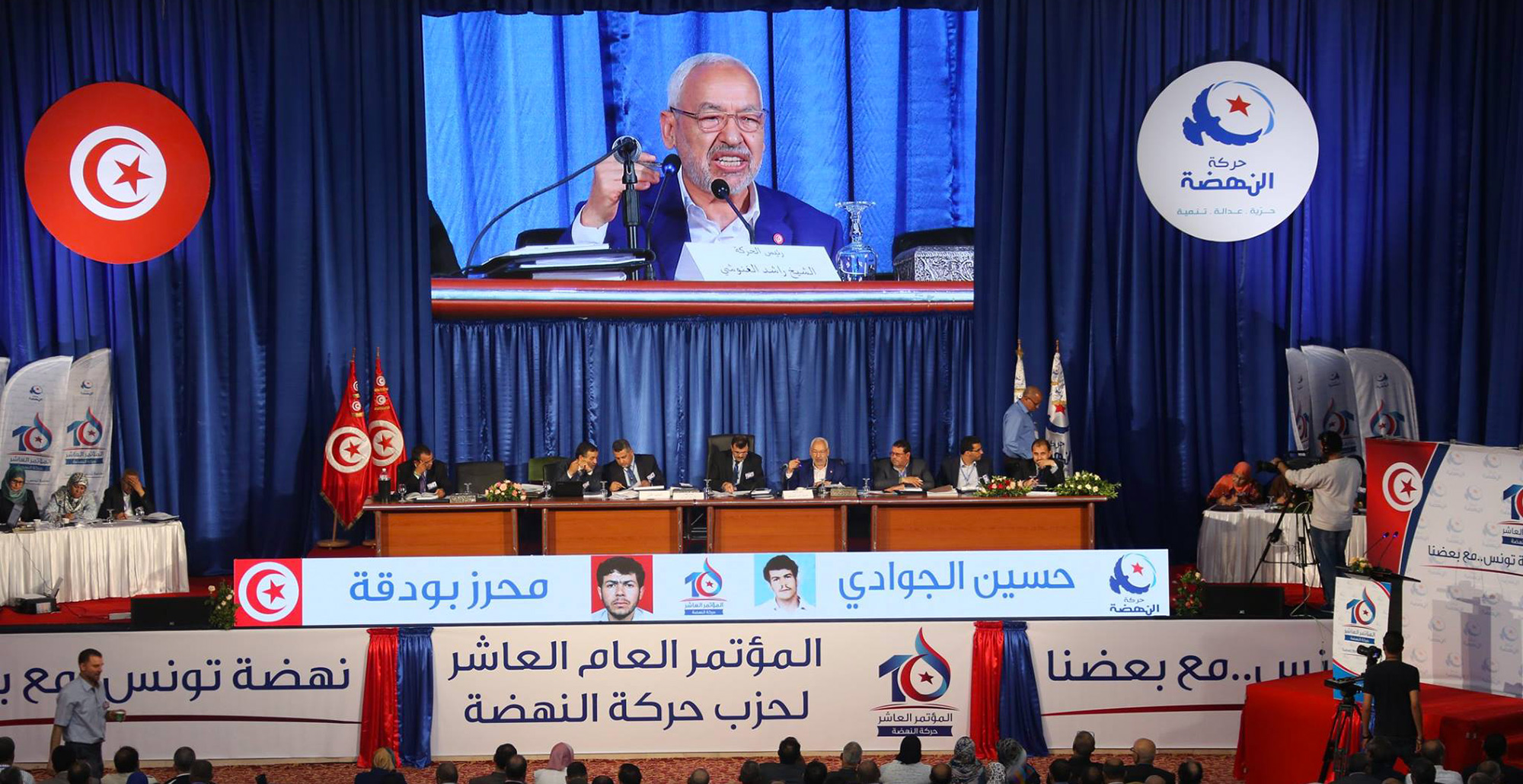 The Tunisian pro-Islamist party has recently joined the camp of post-Islamism similar to Al-Wasat party in Egypt, AKP in Turkey, and the JDP in Morocco. Asef Bayat defines post-Islamism, a term that he coined, as follows:

By post Islamism I mean a condition where, following a phase of experimentation, the appeal, energy, symbols, and sources of legitimacy of Islamism get exhausted, even among its once ardent supporters…post-Islamism is not anti-Islamic, but rather reflects a tendency to resecularize religion…it is marked by a call to limit the political role of religion.

No doubt, initially, Ennahdha’s shift towards post-Islamism appears to be a result of a 5-year experiment during which the party realized the failure of its political Islam between 2011 and 2016. While in its first days in power, Ennahdha leaders called for the 6th caliphate, stating that Salafists remind them of their youth, and declared that they target youth in order to change society. These statements were made between during 2011 and 2013 during Ennahdha’s heyday when it used religious rhetoric and religion to appeal to the masses.

By the end of 2013, it was clear that the party had failed to earn the public’s trust on issues of terrorism and stability; Ennahdha was attacked by its rivals for it was seen as a threat to the nature of the Tunisian society.

Factors that pushed towards post-Islamism

In Tunisia, it appears that the more challenges the Islamists face while in power, the more ‘moderate’ they become.

The party leader, Rached Al-Ghannouchi, stressed the importance of consensus even in 2011. Yet, to prove that his party is no more the persona non grata of Tunisia’s political scene, he played the consensus card with almost all rivals, most notably in his shift from criticizing Nidaa Tounes and Beji Caid Essebsi to forming a political alliance with the latter.

Political polarization was not a part of Ennahdha’s agenda, and its leaders distanced themselves from the orbit of the Muslim Brotherhood or any other transnational organization to regain Tunisians’ trust and to reassure them that Ennahdha’s project was a Tunisian one par excellence.

While in power, both during the time of Troika and in its alliance with Nidaa Tounes, Ennahdha gradually learned how to transcend the ideological divide with other political actors and did not dip into its reservoir of Islamist rhetoric. The Islamist “appeal, energy, and symbols” which Ennahdha used in 2011 were no longer from 2013 onwards, and most importantly, these developments have called into question the famous dictum “Islam is the solution.

Islamizing the state and society or democratizing the party?

Unlike other Tunisian parties, Ennahdha has clearly showed an outstanding level of political maturity. This maturity is manifest in the shift from Islamism to post-Islamism.

As pointed out in Al-Ghannouchi’s speech on the occasion of the 10th congress, the party used to adhere to an essentialist reading of Islam. In other words, Islam for the party’s leaders meant the identity which had been threatened in the era of Bourguiba and Ben Ali and since the 1970’s. This view was criticized by Al-Ghannouchi during the 10th congress when he said that the “identity battle” does not exist anymore in the post-revolutionary Tunisia.

Undeniably, since the foundation of “Al-Itijeh Al-Islemi,” the party-movement’s supporters and leaders are concerned about the nature and identity of Tunisian society. What project the blue-eyed, charismatic, French-educated Bourguiba would choose for the new republic and its citizenry was a question frequently asked by the party-movement leaders.

The answer to this question did not please movement supporters. Both Bourguiba and Ben Ali were seen by Ennahdha as a serious threat to “Muslim Tunisian society.” This resulted in an antagonistic relation between the state and Ennahdha. Yet, again, in the 10th congress, Al-Ghannouchi asserted that such relations no longer exist.

Now, Ennahdha is not an enemy of the state. Unlike the time of Bourguiba and Ben Ali, the Tunisian government tolerates religion and religious individuals. This fact is both understood and stressed by Rached Al-Ghannouchi  in his speech in the 10th congress of the party and in recent interviews.

At this point, the separation of religion and politics (specialization) that Al-Ghannouchi announced seems to be not only the best decision in order to rethink the party’s relations with state and society in light of its past experiences. Furthermore, Al-Ghannouchi’s ‘move’ will certainly help to regain the trust of a number of Tunisian voters who, fearing extremism and ‘imported’ political Islam, were skeptical about the party’s societal project.

Currently, Ennahdha believes that Islam is everywhere. It is dysfunctional to use religion as a mobilizing mechanism or to claim a monopoly over it. Ennahdha is a political party after all, and the ballots are the priority in politics.

Furthermore, Ennahdha’s pragmatism is an important factor that pushed the party towards post-Islamism. On Al-Jazeera, Al-Ghannouchi did not shy away from dissociating himself from the orbit of Muslim scholars, in order to enter into the realm of practical politics. In his discussion with Mehdi Hasan, Al-Ghannouchi  said that he does not deal with ‘if’s,’ but rather with reality, and he refused to answer a question on the inclusion of sharia in the Tunisian constitution.

I asked political sociologist Dr. Teije Hidde Donker about Al-Ghannouchi’s new stance regarding religion and politics when I interviewed him in Ankara, and he told me that Ennahdha leaders are pragmatic like all politicians. Noting that they no longer talk about religion, he commented, “They said one thing and did another—that is the definition of a politician.”

Pragmatism also pushed towards more political openness and less confrontation with the state and its symbols, a strategic move to reassure the party’s critics. Currently, some Ennahdha leaders express their ‘admiration’ for Bourguiba and praise him openly. Interestingly, it is commonly known by Tunisians that in the recent past, Ennahdha considered it sinful to admire Bourguiba, whose first steps towards modernizing Tunisia included removing the veil of a woman in the street.

‘Two truths and a lie’ about Ennahdha

Ennahdha’s shift towards post-Islamism in the context of the post-revolutionary Tunisia reveals two truths and a lie.

The first truth is that Ennahdha, unlike some pro-Islamist parties, has shown capacity for adaptability in relation the societal and political changes. The ideology of the party is no longer limited to the literature of the Muslim Brotherhood. This made the shift from Islamism to post-Islamism possible.

The second truth is that Ennahdha as a pro-Islamist party succeeded in finding the right dosages of political Islam, democracy, and “Tunisian-ness.” Ennahdha, as stated by its leader Al-Ghannouchi, realized that the party no longer “needs to continue political Islam,” because it was a “reaction to dictatorship and to severe laicite.” Al-Ghannouchi now presents himself and his fellow party members as “Muslim democrats.” The project of Islamizing state and society has been replaced by the project of democratizing the party and political Islam, which resulted in the shift from Islamism to post-Islamism. When it comes to democracy, Ennahdha appears to be the sole political actor in Tunisia who has understood the key dynamic of the Tunisian politics: consensus. Lastly, Ennahdha did not forget what many Tunisians think of pro-Islamist parties and extremism. Al-Ghannouchi tried to reassure those Tunisians that the party’s roadmap for the country will not include the importation of any experience related to other Islamist parties. The party’s loyalty is to Tunisia and to the Tunisian state, what he called in his speech of the 10th congress “our ship.” Al-Ghannouchi used the term “ship” and “our ship” to refer to Tunisia seven times throughout his speech. The party also invited Hassan Dahmeni to sing “Ana Tounsi w Ta’rafni” and “Rihet L’ebled Y’aba” among other songs. In a sense, all this reveals that Al-Ghannouchi  knows perfectly well that in order to regain the support and trust of Tunisians, he must maintain Ennahdha’s “Tunisian-ness,” especially after realizing that other parties successfully played the same card in order to appeal to the masses in the last legislative and presidential elections.

These changes within Ennahdha, most importantly the ideological ones, proved that pro-Islamist parties can be democratized, and also that the non-compatibility of Islamist parties’ ideologies and democracy is a lie.

Indeed, the current democratic success in Tunisia owes much to Rached Al-Ghannouchi’s party. Some Ennahdha critics attempt either to hide or falsify this truth by ignoring the importance of the party’s shift towards post-Islamism after the 10th congress and its impact on the political scene, or of Ennahdha’s political maturity during the last 6 years, and by demonizing the party using a ‘microwaved’ and polarized rhetoric.