Over the past several months, Tunisian Minister of Foreign Affairs Khemaies Jhinaoui has been proactive in soliciting extended support from the international community for Tunisia’s development. In May, he wrote in the Washington Times (not to be confused with the Washington Post or New York Times, the Washington Times is considered to have been an outlet of propaganda for the Ben Ali regime), “While we appreciate the assistance we have received from our friends, we also believe that the scope of support should be more commensurate with our challenges […] This calls for exceptional initiatives from the international community to spur the growth and development that our economy – and our people – need…”

The appeal was a precursor to a June 22 meeting with Minister of Development Yassine Brahim, when Jhinaoui announced a new mechanism of economic cooperation with the G7 countries as a means to “enable Tunisia to face financial and economic challenges without precedent and contribute to economic recovery through exceptional measures that transcend traditional support.” For his part, Brahim explained that the initiative would encourage investment and support the National Strategy for Development.

64% of Tunisia’s debt is external

In the meantime, data recently released by the Tunisian Ministry of Finance indicates that the country’s external debt in March 2016 was 30,295.8 million dinars, or 64% of the country’s total public debt. External debt has hovered around the same level since 2014, the year for which the most comprehensive breakdown of debt is available. In 2014, 61% of Tunisia’s total debt was external, or associated with multilateral (49.2%), market finance (28.8%), and bilateral (22%) loans. In terms of guaranteed debt by currency, the vast majority (77.1%) of guaranteed debt was in euros, followed by Kuwaiti dinars (9.7%), yen (4.4%), and US dollars (4.3%). These numbers beg the question of lending sources, whose loan agreements with Tunisia fall under the category of development assistance.

The G7 (Group of Seven) countries—United States, Canada, France, Germany, Italy, Japan, and the United Kingdom—with whom the Ministry of Foreign Affairs has affirmed reinvigorated economic collaboration—count among Tunisia’s most significant sources of foreign development assistance. According to the Organisation for Economic Co-operation and Development (OECD), the Top Ten Donors of Gross Official Development Assistance for Tunisia are, in order of their average contribution size for 2014 (the most recent ODA data year): EU Institutions, France, Turkey, Germany, Japan, the Arab Fund for Economic and Social Development (AFESD), Italy, Switzerland, the OPEC Fund for International Development (OFID), and the United States.

It is important to underline that this list of donors reflects gross ODA, or the amount that a donor actually spends in a given year, as opposed to net ODA which takes into account loan repayments. As the OECD points out, repayments may exceed gross amounts, which may explain why the world’s largest multilateral development banks, particularly the International Monetary Fund and World Bank, do not figure among Tunisia’s top donors of development assistance. These loan-granting giants aside, with the exceptional case of Switzerland, a significant—if not the majority—portion of foreign aid from each of Tunisia’s top gross ODA donors is in the form of loans. 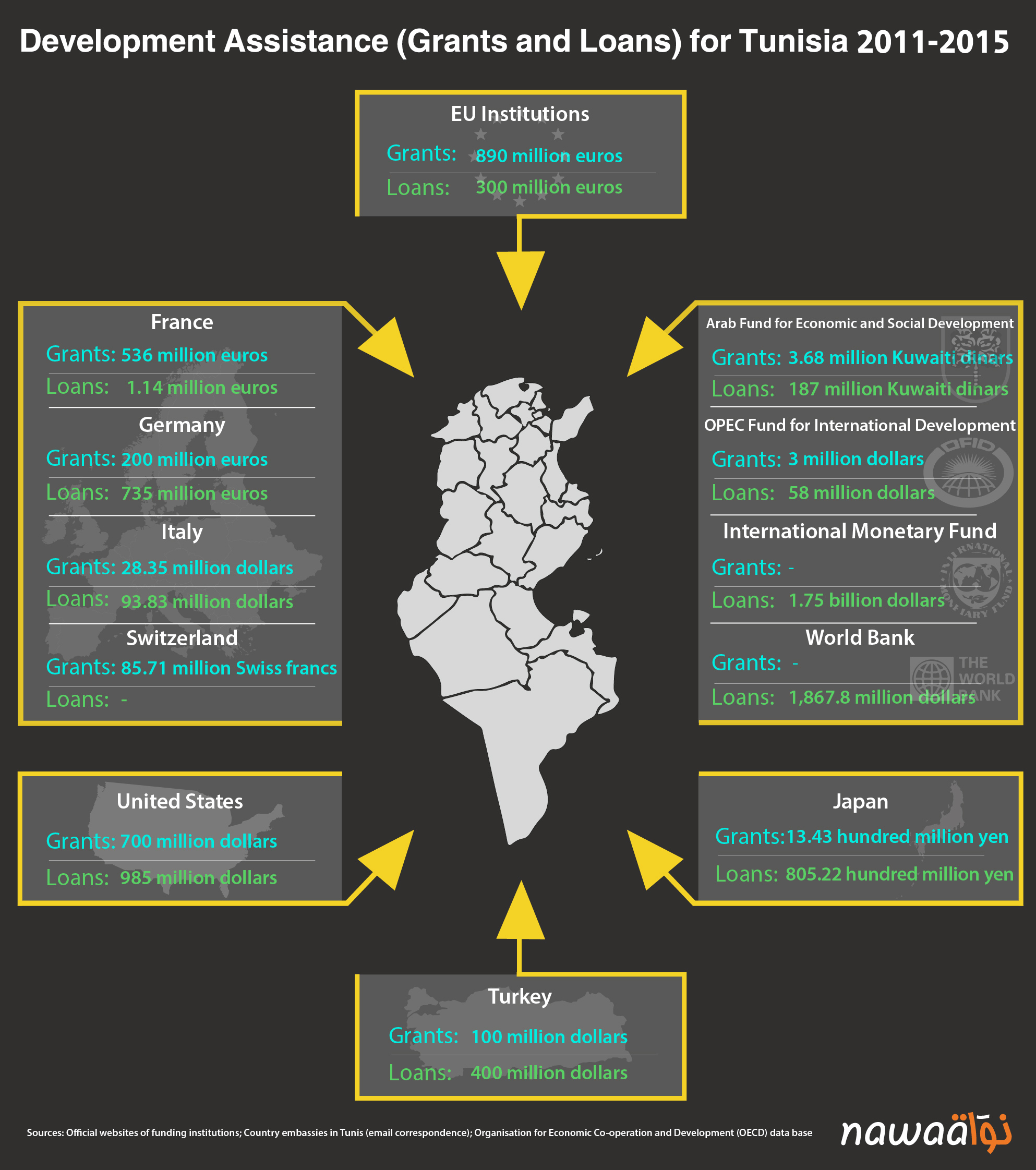 ⬆︎ Focusing on the OECD’s top donors of gross ODA for Tunisia and using information available on embassy and funder websites, we have estimated foreign aid provided to Tunisia between 2011 and 2015. Where information is not available online, we contacted embassies in Tunis and funders directly for the most recent data on cumulative aid amounts following the revolution.

Taking out loans to pay back loans

This macro-financial assistance is not a grant, but only a loan that Tunisia must reimburse, even if its debt continues to increase. European Parliament rapporteur Marielle de Sarnez upon the approval of a new MFA loan to Tunisia, 8 June 2016.

As Tunisia’s greatest donors have obliged Minister Jhinaoui’s call for reinvigorated support with new loan agreements—in June, both the EU and US designated 500 million euros and 500 million dollars respectively to this end—others have pointed to the country’s external debt, ridiculing the decision to continue accepting loans to pay back debt.

Since 2011, the EU has more than doubled the amount of financial cooperation (grants) allocated to Tunisia … On top of these grants, the EU provides macro-financial assistance (loans) worth EUR 300 million. Tunisia: Council approves financial assistance, 24 June 2016. European Council of the European Union.

European Institutions have granted Tunisia upwards of 890 million euros in aid for economic recovery, democratic transition, civil society support, security sector reform, and regional development. The total amount of loans pending and approved exceeds this amount. On June 24, the European Council approved a loan of up to 500 € million “to complement a new comprehensive economic adjustment and reform programme between Tunisia and the International Monetary Fund (IMF).” The aid package is the second of Europe’s micro-financial assistance (MFA) loans proposed in 2013 as a means to “help Tunisia cover its external financing needs” and “encourage reforms aimed at improving the investment climate and fostering trade and regulatory convergence with the EU.” It is the second MFA approved for Tunisia following the first in May 2014 for €300 million. Additionally, Tunisia has received nearly 1.5 billion euros since 2011 in finance contracts (loans) from the European Investment Bank (EIB), which in February committed a new contract for “economic development, social cohesion, and jobs.”

Following the most recent agreement signed last month, the amount of US loans since 2011 also surpasses its support in grants and other forms of assistance. On June 3, the US Department of the Treasury announced the signing of a $500 million loan agreement with Tunisia to help the country in its “progress towards meeting its economic reform goals on behalf of its people.” The loan guarantee is the third provided by the US, the first for $485 million signed in 2012, and a second for $500 million in 2014. Beyond this, the US has allocated over $750 million in other types of foreign assistance to Tunisia since 2011, according to the Treasury.

Through the OPEC Fund for International Development (OFID), Tunisia has received a total of $61 million since 2011. As per OFID’s Project Portfolio for Tunisia, $58 million of this funding is in the form of loans: a public sector loan of $50 million to STEG for the construction of a power plant in Sousse, and a trade finance loan of $8 million to the Tunisian government. The OFID Department of Information has also confirmed $3 million in grants since 2011 for four projects in health and agriculture.

Multilateral development banks: IMF and World Bank By comparison, between 2011 through 2015, the International Monetary Fund and the World Bank committed $1.75 billion and $1.86 million respectively in lending to Tunisia. Such aid is projected to continue through 2016 and beyond; in response to Tunisia’s request following the initial Stand-By Arrangement in 2013, the IMF approved in June 2016 the Extended Fund Facility, a four-year loan worth $2.9 billion to support the government’s economic agenda “aimed at promoting more inclusive growth and job creation.” In the meantime, the World Bank projects $770 million in lending commitments to Tunisia for 2016.