Ennahda’s 10th Congress took place between May 20th and May 25th, bringing reforms which sparked conversations about where the party is headed next. Anglophone media coverage highlighted Ennahda’s separation of “mosque and state” as a step towards better governance in Tunisia. However rather than “secularizing”, Ennahda is transitioning from a religious movement promoting an identity to a political movement that uses religious principles to inform policy. This new image of “Muslim Democrats” is welcomed by Western audiences as it is a sign that Ennahda is distinguishing itself from the negative image of radical Islamist factions and violent extremist groups.  The portrayals of what this “separation” truly means varies in Western and Tunisian news coverage, with some reports being more skeptical than others.

On May 23rd, CNN news anchor Christiane Amanpour reported that Tunisia, the “single success story of the Arab Spring” and “leading export of jihadis” is breaking boundaries once again. This coverage of the Congress encapsulated a particular mainstream image of “Islamism” and party politics in the MENA region. Her interview with Ennahda Party leader, Rachid Ghannouchi emphasized an Americanized vision of secularization- one that falsely assumes Islam will be erased entirely from politics. Framing the reforms as a landmark achievement as well as an action against violent extremism in the region, Ennahda is a “role model” for other states in the Middle East and North Africa.

Amanpour asked Mr. “Ganoochee”[sic] uninformed and loaded questions such as, “Are you aware of the historic nature of this?” and “Are you acknowledging that Islam as politics and governance has failed, and what you’re doing could be an example for similar parties around your neighborhood, the Middle East?”  This celebratory account of exceptionalism in the region frames the Ennahda Congress as a positive for US foreign interests and the promotion of democracy in the MENA region. 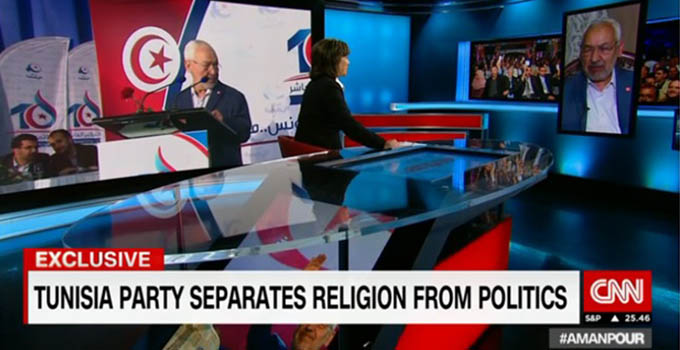 Both Tunisian and Western media have paid much attention to Ennahda’s decision to ban party members from proselytizing. They are also now barred from leading civil society organizations. This is the true “separation” of mosque and state that is making headlines although this particular reform is described with varying sets of terminology. Commonly mentioned, for example, is the notion of da’wa. The word is at times used interchangeably with “religion” whereas it’s actual meaning in Arabic is “invitation” or in this context, “religious outreach”.

In interviews with CNN and the Tunisian website Leaders, Ghannouchi’s rhetoric on the subject of da’wa is consistent. However, the meaning of da’wa in the media is not always clearly spelled out. For Ghannouchi, the separation of politics from da’wa is not so much about separation (fasl) in the sense of divergence but rather, a new form of differentiating or specializing (takhassus) religion to compliment politics.  Monica Marks, a visiting fellow at the European Council on Foreign Relations makes note of this important distinction, however others do not. The Tunisian online journal Leaders, the French word “prédication” is commonly used for da’wa while one author for La Presse employs the more precise term of “preaching” (le prêche).

In contrast to mainstream coverage, more in-depth analyses offer speculations and reasons behind Ennahda’s recent reforms. For instance, Monica Marks argues that the reforms to separate the religious movement (haraka) from the party (hizb) reflect a sign of growth from past mistakes for the sake of pragmatism and survival. “Although suitable for that time, many Ennahda leaders now argue that Islamism is ill-adapted to a context in which liberation (i.e., a seat at the democratic table) has been achieved, and in which religiously oriented parties must govern pragmatically.” Writing for Al Jazeera English, Larbi Sadiki speculates that “Ennahda is probably responding to the misgivings of its detractors that it is hiding a secret theocratic agenda: That once in power it will impose dictatorship”.
Not everyone however is as optimistic that Ennahda’s reforms reflect actual ideological change within the party. Known for being strongly anti-Islamist, Kapitalis resurrects an old narrative calling for apprehension of the “separation”, reflecting the mistrust for Ennahda in the minds of many Tunisians. “Don’t be duped, implementing Sharia’a remains the ultimate objective for Ennahda,but the leaders of the part have simply changed their strategy”.

The Dangers of the AKP Trope

Around the time of the Congress, reports in French, Arabic, and English echoed each other in saying that the “Muslim Democrat” image Ennahda is crafting for itself is modeling after Turkey’s AK Party. This observation isn’t new in fact, after the revolution in 2011, Ennahda did not shy away from having “strong relations” with and claiming to model AKP. However,  following the 10th Congress, the discourse has shifted from focusing on AKP’s apparent influence on Ennahda to how in light of domestic issues Tunisia faces, the Turkish model must be avoided.

Nicholas Noe points out, there is more to supporting an emerging democracy than supporting civil society. There must be initiatives that look at economic regression, corruption, and the remnants of the police state.

“Among Tunisians there has long been a robust debate about the best way forward. This is especially true when it comes to the central problem of dealing with the deeply corrupt, anti-reformist “parallel state” that is simultaneously strangling the economy and hobbling the security sector.”

One strategy is to make modest reforms in order to gain the confidence of external Western powers. Separating “mosque and state” can be read as a reform to gain confidence of external Western powers. However, rather than blindly rewarding or celebrating what is perceived as a “secularized” moderate Islamist state, Noe argues that Western powers must step back and allow for reforms to happen organically, and on Tunisian’s terms. Being less attuned to the reality of the Tunisian political climate and domestic issues, media outlets that perpetuate an AKP model rhetoric are doing more harm than good.

5 years after the revolution, there are calls to ameliorate domestic issues such as mass unemployment, corruption, and security concerns. Having an inconsistent vocabulary to discuss Islamism or inadvertently reinforcing a corrupt parallel state can only backfire. Furthermore, reforming policies such as da’wa must be clearly defined by Ennahda and properly treated within media coverage. Moreover, the fear of taking on policies similar to the AKP is a valid concern. For instance, will Ennahda’s reforms utilize what Noe defines as “de-facto” power structures?
Currently, Ennahda is following AKP’s footsteps by having a similar economic policy of Islamic open market capitalism. Moreover, making comparisons to a party notorious for its human rights abuses, corruption scandals, and oppressive domestic and foreign policies is as dangerous as misunderstanding what this “separation” truly entails.