The opinion poll is, in the current state, an instrument of political action; its most important function consists perhaps in imposing an illusion that public opinion exists as the purely additive sum of individual opinions. Pierre Bourdieu, The Public Opinion Does Not Exist, 1972

On May 10, Tunisian polling institution SIGMA Conseil and German foundation Konrad Adenauer Stiftung (KAS) presented the results of their survey “Religion and Politics in North Africa.” According to the KAS webpage, “the identity of citizens is divided between religious affiliation and citizen affiliation. The study showed that Tunisia is distinctive by a sort of equilibrium between the two.” Similarly, Tunisian and foreign news outlets reporting on poll findings have presented it as evidence that “Tunisia is an exception.” But how accurately can such numbers reflect society’s views on issues as elusive and multifaceted as religious and national identity?

The response to such a question depends largely on methodology. In 2011, the Pew Research Center in Washington conducted a survey on “The World’s Muslims: Religion, Politics, and Society.” The study included face-to-face interviews with over 38,000 Muslims in 39 countries. For Tunisia alone, 1,450 men and women from across the country’s 24 governorates were polled. Survey questions were organized in distinctive categories (including sexual relations, suicide, alcohol consumption, and divorce among others) and measured across the board as a single percentage; the poll’s clarity and consistency made it a useful resource for a nuanced examination of specific social trends, mores, and taboos.

According to what information is available on the methodology of the more recent SIGMA-KAS poll, 1000 citizens from Tunisia, Algeria, Morocco, Libya, and Egypt were surveyed. Completed in December 2015, the study was conducted using CATI (Computer Assisted Telephone Interviewing) through SIGMA Conseil’s calling center. Given that the countries examined range significantly in population size, the proportional representation of individuals surveyed is unequal (compare Libya’s six million to Egypt’s 82 million people). Quotas on “region, environment, age, and gender” were observed, although the specific demographic profile and geographic distribution of respondents were either not accounted for or not presented in the findings. Contacted by Nawaat for more details about survey methodology, SIGMA Conseil did not respond with any further information.

Of the 1000 Tunisians surveyed, most considered themselves to be Tunisian before Muslim – but paradoxically prioritized religiosity over nationalism. In other questions, Tunisian respondents appeared to confirm Tunisia’s reputation as more secular than neighboring countries, indicating that the importance of religion in their lives is only marginally less than for their neighbors (Slide 8). Prompted to decide which aspect of their identity was more important– national or religious—Tunisians polled were split nearly 50/50.

Respondents were also asked to indicate their position regarding the hijab, niqab, and qamis. It is unclear precisely how the question (“What is your degree of support regarding the following religious appearances?”) was posed over the phone, given the absence of visual cues. Furthermore, the measurement scale for respondents’ “level of support” is not presented with survey results. Nonetheless, in all categories, Tunisians surveyed appeared be least in favor of “ostentatious” expression of Islam. Interestingly, a SIGMA poll presented in March of this year presented the same findings. Days after Al Horra party parliamentary members had submitted an initiative to prohibit the niqab in public places for security reasons, SIGMA president Hassen Zargouni appeared on El Hiwar Ettounsi to report on Tunisians’ point of view on the topic. Out of the 1,009 Tunisians polled, 60% responded in favor of the hijab, 4% in favor of the niqab, and 21% in favor of the qamis; the same percentage rates are presented in the “Religion and politics” poll, and are either confirmed by or were the same questions-responses used in the present study.

For Western media, poll results substantiate the image of a secular Tunisia. “Majorities of Muslim Arabs in North Africa want a separation of religion and State,” wrote Juan Cole. “Tunisia stands out from its neighbors,” was the subtitle of a France 24 article. “Unsurprisingly, on several points, Tunisia is by far the least conservative country in the region.” Such observations were based on respondents’ answers to questions such as the following: 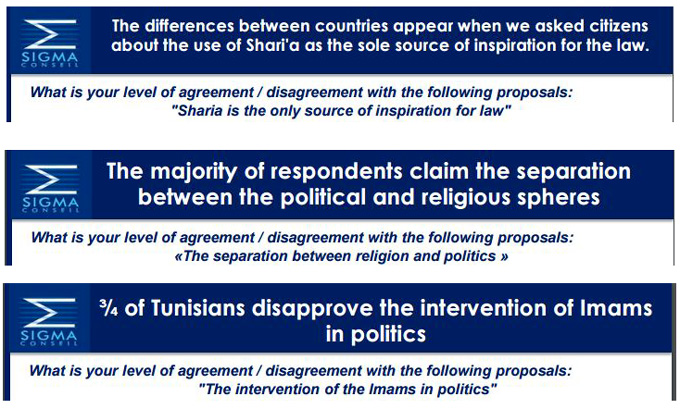 …society refuses terrorism, considering this phenomenon to be exogenous. In other words, its roots lie outside the nation. Mohamed Hadad quoted in Tunisians and religion: analysis by the President of the Arab Observatory of Religion and Liberties, Réalités

The survey dedicates a substantial number of questions to religious extremism, ISIS, and radicalization. It is unclear as to whether questions were open-answer or multiple choice. Assuming the latter, respondents would have been presented with, in the case of questions 35 and 36, eleven options among which were vaguely distinctive choices such as “unemployment/poverty” and “money” or “unconsciousness” and “ignorance.” The results here nevertheless accentuate individual experiences of disaffection and the (mis)understanding of Islam.

“In your opinion, what is the principle cause of religious extremism?” The most common response across all countries was the misinterpretation of Islam. For Tunisians surveyed, the range between the top three answers was marginal. But when asked about the principle reason that pushes individuals to join ISIS, responses varied greatly. A majority of Tunisians polled attributed the drift to radical militant extremism to unemployment and poverty. Based on these numbers and answers, the survey notes that “Socioeconomic and cultural instability among youth constitutes the main reason which propels radicalization.” It is worth noting that only the French version of the survey specifies youth as the demographic group in this question.

With a small, disproportionate sample size across countries and ambiguous questions that understate geopolitical factors, the SIGMA-KAS poll approaches issues as if they exist in a vacuum. Though the study’s subject matter is certainly relevant, its attempt to quantify North Africans’ perceptions regarding religion and politics minimizes how truly multidimensional and site-specific such questions are. On a global level, and particularly for a Western readership, media’s generalizations and extrapolations about country-to-country comparisons serve in fact to reify clichés and mainstream assumptions about religion and politics in North Africa. In Tunisia, the poll serves as a tool to validate the simplified representation of Tunisia as an exception or anomaly in the region.

In 1972, sociologist Pierre Bourdieu made the case that the public opinion does not exist. His argument stands to reason for our present case in which the sum of individual opinions concerning identity, national and religious association, and politics are ill-assessed and misrepresented in the context of an unscrupulous cross-country public opinion poll.