Since the wave of social movements began in January, the circulation of images presumably depicting terrorists and weapons intercepted by Tunisian authorities have been fuel for mainstream media’s slander campaigns against social movements and sensationalized news headlines about terrorism. In the meantime, the purple* glow of nostalgia for the past regime burns strong on the sets of prime time television shows where interlocutors continue a misguided debate around security versus human rights.

Rumors of violent protests, machete-bearing terrorists, and a cache full of weapons

Beginning on January 21, fabricated photographs representing protests turned violent and terrorists brandishing machetes were posted online by security forces, a tactic (which some associate with the protests in January 2011) to justify police brutality. Secretary General for the National Guard Sami Knaoui appeared twice on El Hiwar Ettounsi regarding two such images, first to share them with his audience and subsequently, upon the revelation of their disingenuousness, to offer an explanation of their diffusion.

This month, customs’ tracking and interception on February 9 of a “container filled with weapons” that had arrived from Italy to the port of Rades refueled unfounded, fear-provoking theories regarding potential terrorist operations. “The container held weapons and not toys” and “its importer is a Belgian citizen who pretends to want to invest in Tunisia,” reports confirmed on February 10 following a press conference with the Directorate General of Customs in Tunis. The Belgian investor was arrested and the case transferred to the anti-terrorism division of the court of Nabeul.

Prime time television programs favored the uncontested assumption that the weapons were real. On the February 10 edition of El Hiwar Ettounsi’s 24/7, host Meriem Belkadhi and guests (among whom were Customs General Director Adel Ben Hassen) imagined the devastating projects that might be realized with such an arsenal, guessing at the intentions of conspirators and evoking the need for better control of the borders. On February 12, an article posted on a blog provided a detailed inspection of the intercepted materials and determined most of the weapons (with the exception of a Glock 9MM gun) to be Airsoft replicas.

It was however another week before mainstream media acknowledged the true nature of the contents found in “Ali Baba’s cave,” as Ben Hassen had previously described customs’ discovery. On February 18, the Belgian investor was released from custody and the case transferred back to the public prosecutor in Nabeul on the basis that the affair bore “no relation to terrorism.”

News and information for political entertainment 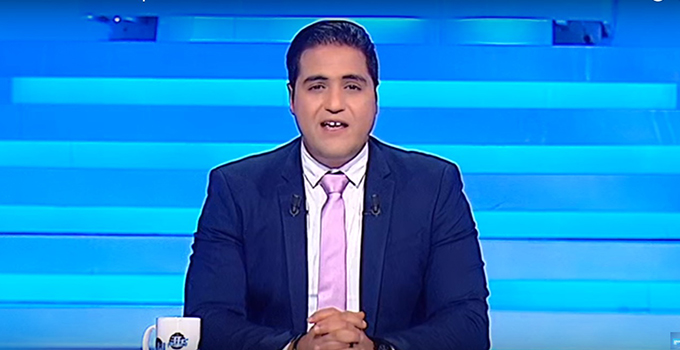 In his most recent TV program critique, “Getting high on purple pills,” Thameur Mekki captures the offense committed by popular media figures at the expense of important public debates. During the February 17 edition of El Hiwar Ettounsi’s Klem Ennes, both ambiance and interlocutors evoked nostalgia for the former regime and reduced complex issues (transitional justice, security, human rights, etc.) into the makings of political entertainment. Donning a glossy purple tie, host Amine Gara welcomed his guests, four public figures who wear on their sleeves their sympathies for deposed president Ben Ali: comedian Jaafer Guesmi, singer Nour Chiba, entertainment personalities Baya Zardi and Borhen Bsaies; the latter, introduced as “a man of the media,” was and remains a veritable symbol of Ben Ali propaganda.

Invited to play “Top or Flop?” the guests responded to a video clip of a fiery dispute between Ahmed Rahmouni of the Tunisian Observatory for the Independence of the Magistrates (OTIM) and Minister of Education Neji Jalloul. Judging which of the two interlocutors had the upper hand, each of the four guests explained why Rahmouni, who had denounced the torture of terrorism suspects, represented the “flop.” Zardi condemned the “whitewashing of terrorism,” and commentator Lotfi Lamaari intervened that “terrorism today benefits from a judiciairy, human rights, civil society umbrella.”

“Yet again, Mekki observes in his critique of the show, “a difficult and sensitive topic is treated superficially by an entertainment show.” Indeed, though there have been important changes since 2011 in Tunisia’s media landscape, prime time entertainment shows have yet to change their colors. Between a near blackout on social and economic realities, and a sensationalist, fear-mongering rhetoric concerning complex security and political issues, the country’s dominant media outlets continue to work against the diffusion of quality news and information through censorship, rumors, and tall tales.

* Purple was the color of Ben Ali’s ruling party.