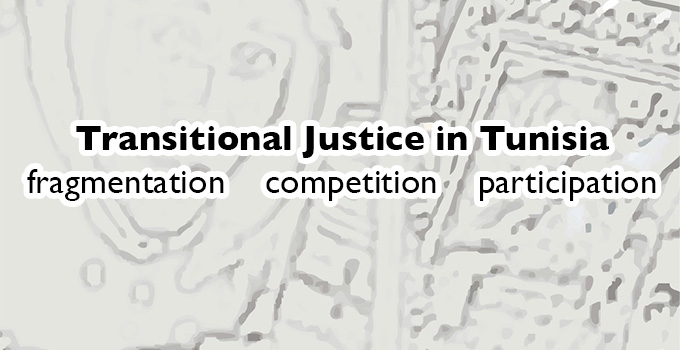 Following the publication of an ICTJ report on Tunisia’s Truth and Dignity Commission, Impunity Watch has presented the initial findings of a collaborative research project on victim participation in the transitional justice process. Amidst observations, analyses, and recommendations that have been presented by national and international actors in the field, the study represents the “most rigorous effort” thus far to evaluate victims’ perceptions of and roles in the undertaking of transitional justice in Tunisia.

To participate is to have hope: Victim participation in Tunisia’s transitional justice process is the product of the Transitional Justice Barometer, a project funded by the Netherlands Organisation for Scientific Research (NWO) and conducted by Impunity Watch, the Centre for Applied Human Rights (CAHR) of the University of York, and the Kawakibi Democracy Transition Center (KADEM) in Tunis. The research work carried out over a two-year period (October 2014 – October 2016) is «intended to be citizen-centered, both qualitative and quantitative, focusing on the needs of transition of a wide range of victims and stakeholders» in order to «permit a longitudinal understanding of the impact of transitional justice in Tunisia». Among the project objectives are the development of a KADEM research team and the training of a number of researchers throughout «communities most affected by historical violations».

Establishing the basis of the study, contributors Kora Andrieu, Wahid Ferchichi, and Simon Robins note that a lack of victim participation is often associated with failed transitional justice processes in which the needs of affected communities are not met. A general critique– «The field of transitional justice remains dominated by a legalistic and technical approach that neglects the more human and lived dimension»—justifies the qualitative approach of the project. In what represents the «most rigorous effort» thus far to determine victims’ perceptions of the transitional justice process in Tunisia, more than one hundred individuals were interviewed according to three distinctive questionnaires (targeting victims as well as actors in the field of transitional justice). Individuals from Tunis, Nabeul, Bizerte, Kasserine, Sidi Bouzid were selected «with the aim of accessing victims from different «categories» affected by different types of violations, including both personal integrity violations and economic marginalization, whose legacy is historical and structural».

● Military tribunals and specialized chambers: Criminal investigations are associated with the greatest challenges facing Tunisia’s transitional justice process. A number of government officials and army officers who committed violations were tried and sentenced before the adoption of the Transitional Justice law, and subsequently received reduced sentences and/or were released from detention by the Military Court of Appeal. While definitive judgments for contradictory rulings and pending cases may be pronounced by specialized chambers (Decree n°2014-2887), these courts have yet to be established. In the meantime, inconsistencies in jurisdiction and procedures have fueled suspicions about the politicization of trials and prompted the concerns that violations committed before and during the revolution might go unpunished.
● National consultations: The creation of Tunisia’s Ministry of Human Rights and Transitional Justice in January 2012 was an «unprecedented» and controversial initiative to organize dialogues with civil society in each of the country’s twenty-four governorates. Many felt that the «institutionalization» of such national consultations undermined the legitimacy and neutrality of discussions.
● Investigative bodies and legislation: Tunisia’s investigative bodies and legislation concerning transitional justice feature an innovative and fairly comprehensive conception of violations committed and categories of victims. The Commission of Inquiry into Corruption and Embezzlement (introduced by Ben Ali on 13 January 2011) has served to address economic crimes, promote social inclusion, and contribute to the fight against impunity. Additionally, the transitional justice law identifies the violation of socio-economic rights and offers a broad definition of victims including «any area that has been excluded and marginalized systemically». These qualities present the possibility for collective forms of reparation and development programs for governorates long «excluded from the country’s growth and marginalized by the central government in Tunis».
● Reparations: The absence of a definitive list and comprehensive database of victims and the violations suffered has aroused suspicions that political agendas, as opposed to victims’ needs, have driven the country’s transitional justice process. Furthermore, the categorization of individuals by period and/or types of violations suffered is seen as having created competition amongst victims.

Barriers to victim participation
Describing the fragmentation and competitiveness of the Tunisian experience that have impacted victims’ lives and their ability to engage in the process of transitional justice, the research team identifies common barriers to participation:

● Lack of knowledge of the process: There is a great deal of confusion around the procedures, documents, and mechanisms (investigative bodies, victims’ groups, etc.), particularly for victims living in regions outside of the capital.
● Lack of monitoring and results: A number of victims who have filed cases are discouraged by the slow pace and/or unresponsiveness of mechanisms; a lack of follow-up has caused many to lose patience and faith in the process in general.
● Fear of the return of the old regime: The presence of former officials and political figures in the current political scene has deterred some victims from seeking reparations; that there has been no concrete vetting process for former security and justice officials is, in the case of some victims, a reason for self-censorship.
● Regional, social, economic inequalities: In regions throughout the country, victim participation has been hindered by a lack of means (money, transport, time) to travel to the capital. Another barrier is self-marginalization; some individuals refrain from engaging in discussions and processes because they feel that they do not have sufficient educational background. Regarding collective victims, «For a victim region or community to participate presumably demands a representative approach, in which some actors speak for the marginalized». Ironically, the authors point out, such representation may itself be yet another form of exclusion if victims’ voices are eclipsed by those of their «better heard» representatives (such as victims’ groups or civil society organizations).
● Political discourse: Gaps in communication strategies have spurred the sense that the process is «too complex or disconnected» from the daily realities of many victims, and compounds the intellectual and regional marginalization perpetuated by the political elite.

The project: international collaborators and local partner, KADEM
In its September report, ICTJ highlights the importance of the Transitional Justice Barometer among civil society networks. If it is relatively easy to discern why the project’s international collaborators have invested in a two-year study on victim participation in Tunisia (browsing the NWO, Impunity Watch, and CAHR websites, one finds a great deal of information regarding the organizations’ previous undertakings in Tunisia and/or work in the field of transitional justice), it is less evident why the Kawakibi Democracy Transition Center in particular fills the very important role of a local partner. According to ICTJ, the project was started by the Kawakibi Center, «specialized in transferring knowledge and building capacities in the field of democratic transition». The KADEM website itself lacks information regarding the organization’s history, mission, vision, and members-base, and readers are left to glean what they can from a list of «Programs» among which two short paragraphs provide a general description of transitional justice. A number of external sources specify that the organization was founded in Amman in 2006 through a grant provided by the Middle East Partnership Initiative (MEPI) of the United States State Department.