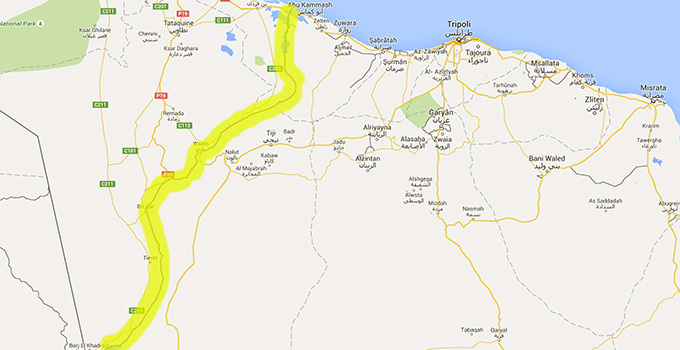 On July 23, the International Crisis Group published Reform and Security Strategy in Tunisia, an in-depth examination of the disjointed chain of command and general disorder of the country’s security apparatus to which local and foreign media outlets alike have pointed since the attack in Sousse. Published just weeks after the President declared a state of emergency and the Prime Minister announced the construction of a wall at the Tunisia-Libya border, the report is a timely and pertinent reference for discussions regarding the State’s interpretation of and approach to national security.

…the constitution is unclear and ambiguous regarding the concept of security. Responsibilities are not clearly defined: Security for whom? In the name of what values? In what measure? To confront which threats? By what means? At what cost and for what period of time? Reform and Security Strategy in Tunisia, International Crisis Group. 23 July 2015.

Such questions are particularly resonant in debates concerning the wall, a 200-kilometer trench-lined sand barrier which is to protect the country’s south-east border with Libya. In Tunis, precious little attention is granted to the realities of populations living in border regions and diplomatic relations between the two countries, much less to the social, political, and economic events and realities within Libya. Decision-makers and media outlets in the capital are uncommunicative about such information, although it is possible that their silence reflects lack of a political vision for the country’s border populations and the absence of a coherent foreign policy in Libya.

One often hears that citizens in the south-east of the country are more closely associated with Libya—for reasons of shared geography, economy, and cross-border family networks—than with Tunisia, where the discourse and decisions of political elites in the north appear little concerned with the daily experience of inhabitants in the border regions [See Note 2 below]. Citizens in the governorate of Médenine, a stronghold for Ennahdha in the 2014 elections, have interpreted the construction of a wall between Ras Ajdeer and Dhiba as a political sanction against them. 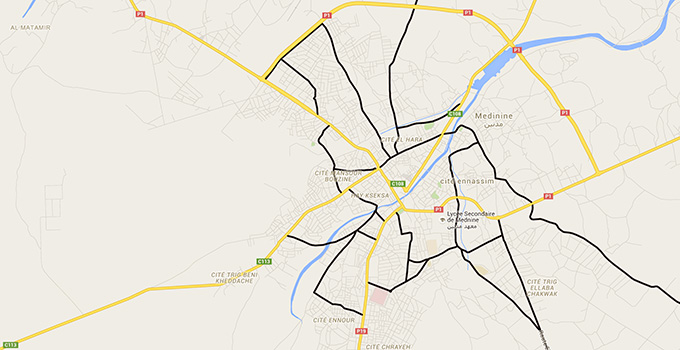 At Ben Guerdane (the Tunisia-Libya border) … the heads of contraband cartels benefit from the weak presence of the State to develop a system of parallel trafficking which often represents the only economic activity that enables a number of inhabitants to survive without leaving their location.” Reform and Security Strategy in Tunisia.

Four years after the end of the Ben Ali regime, not only has the State failed to intervene in regional issues through, for instance, implementing policy reforms and undertaking region-specific development projects, but it has continued to strengthen role of security forces and intensify security measures at the borders. As opposed to expanding its vision of national unity to encompass the breadth of the country’s populations, the administration has imposed superficial restrictions of questionable relevance and function. That the wall was conceived exclusively as a mechanism of protection against the influx weapons and the perceived threat of terrorism is unlikely, and with a lack of official information, one can only speculate. In this context, it is worth considering another project in-progress in the same region: a duty-free zone1 close to Ben Guerdane.

“A free zone is a closed space under the permanent control of customs where all merchandise allowed in must conform with Tunisian law and regulations. Dangerous or counterfeit merchandise is not allowed inside (as per international obligations). Merchandise destined for the local market is subject to fees and taxes. The majority of products from Libya originate from the extreme East (notably China) and are counterfeit. How do you envision handling this merchandise and are individuals affiliated with the informal market aware that they must agree to all of these regulations and that they must pay taxes and abstain from importing counterfeit products? The prevailing conception of a free zone in this region is an “immense souk Libya”* where all is permitted and every transaction is free. A great deal of confusion surrounds this free zone project and risks stirring tensions. The administration would do well to clear up this misunderstanding.”

In 2013, Mohamed Boussaid, head of the Ministry of Commerce management unit for Ben Guerdane, announced the forthcoming installation of a free zone in Ben Guerdane, “the first commercial and logistics platform in Tunisia.” On the occasion of a forum on the “fight against contraband” in April of this year, Minister of Commerce Ridha Lahouel referred to the commencement of construction work in Choucha “which will serve to unify all merchants of the informal market and to contribute to reducing as much as possible the flow of this trafficking, all the while creating a veritable development zone in the region.”

In efforts to determine the current project status, Nawaat contacted the Ministry of Commerce as well as the Agency for the Promotion of Industry and Innovation (APIA, affiliated with the Ministry of Industry) regional office in Médenine, and the General Directorate of Customs (within the Ministry of Finances). The only accessible source of information until now has proven to be the Société d’étude, de realization, d’amenagement et d’hydraulique (SERAH), an engineering and project management agency commissioned by the Ministry to carry out a feasibility study. On the company website, a page describing the Technico-economical Study of the Commercial and Logistics Duty-Free Zone in Ben Guerdane indicates that the research conducted (2013 – 2014) comprised:

Phase 1: socio-economic analyses, analyses regarding the commercial exchanges between Tunisia and Libya; sociological analyses (the practice of parallel commerce and the possibility of its integration in a structured zone of exchange; typology of operations, concept proposals: operation models and project components;
Phase 2: feasibility of project study; legal and institutional framework; approach for the selection of a developer in the domain of PPP.

In response to our questions, civil engineer and SERAH deputy director Jaafar Elaouani-Chérif explained that whereas SERAH’s research work for the project was completed about a year ago, the Ministry of Commerce means to carry out further studies as decision-makers discuss which operation model to pursue. Curious about how the installation of a new barrier between Tunisia and Libya might impact the development of a free zone which aims to “provide an active support for import-export activities from and to Libya and beyond,” we asked whether or not, during the year-plus that the study was carried out, SERAH researchers were aware of plans to build a wall. Elaouani-Chérif said that the research group had not been aware of the project, but indicated that it should not interfere with plans for a free zone given the exclusively economic nature of the latter.

In an article published on La Presse earlier this year, Elaouani-Chérif detailed the projected economic benefits of a duty-free zone in the region:

A commercial and logistics platform located close to the city of Ben Guerdane aims to consolidate the economic dynamic between Tunisia and its neighbor to the east by implementing an array of activities that range from logistics, wholesale, and retail to support for the overseas expansion of Tunisian businesses … It will enable job stimulation and economic development in a relatively marginalized region while benefiting from neighborly relations with Libya to the end of diversifying activities … In addition, [the zone will include] an administrative body (police, customs, a variety of administrative services…), as well as a number of public services (construction and public works, distribution, support services for businesses, etc.) which will create a large number of permanent jobs. [Such a project can serve to] dissuade a plethora of unemployed youth from engaging in cross-border contraband activities and parallel commerce which is so detrimental to the national production system. Jaâfar Elaouani-Chérif, Project for a Commercial and Logistics Zone, La Presse de Tunisie. 23 February 2015.

Border control and economic development require cooperation
A specialist in mediation and conflict resolution2 who frequents both sides of the Tunisian-Libyan border shared an alternative perspective on the interdependent security and economic issues in the region. By his account, construction of the wall commenced earlier than indicated by Prime Minister Essid, some time during Mehdi Jomaa’s tenure in the technocratic government. By that period, negotiations had begun in order to create a free zone in the region, and in this context, Libyan authorities in Zouara perceived the wall as the Tunisian government’s stubborn assertion of its geographical preferences for the zone. At some point, construction was stopped, and resumed following the March 18 attack in Bardo; after the June 26 attack in Sousse, Essid presented the wall as a counterterrorism mechanism.

Whatever strategies, deliberations, or decisions have led to the construction of such a barrier and the preparatory work for a free zone, both projects appear to be unilaterally driven, without the cooperation of either Libyan authorities or citizens living in the border regions whose livelihoods are directly impacted by such initiatives. The administration, however, cannot control the borders without coordination and buy-in from local populations. “The state,” our interlocutor commented, “is basing decisions and policies on conditions, needs, perceptions from the north that are not based on the reality of the south,” which, he observed, is only serving to increase tension and mistrust in the south-east of the country.

Economy of necessity
Carnegie scholar Hamza Meddeb has carried out extensive research work on youth and contraband in Tunisia’s marginalized border regions. In a report3 on the Tunisian-Algerian border region of Kasserine, Meddeb refers to borders as a “natural resource”4 and describes informal commerce as an economy of necessity. At thirty-five kilometers from the border, Ben Guerdane is a long-established market, an “immense souk Libya.”* Historically, the State has treated the area as a zone of tolerance, turning a blind eye to illicit trafficking partly because of the profits afforded big businessmen (a textbook case of white collar crime), and partly because of the government’s incapacity to provide economic alternatives for local populations.

Meddeb stresses the importance of deconstructing stereotypical associations—smugglers, delinquency, contraband, criminality, terrorism—that have been perpetuated in an atmosphere of fear-driven politics by certain government officials and mainstream media. “This does not mean that connections do not exist between these spheres or milieux, so it is important that the State deals with or regulates cross-border activities with pragmatism. A crackdown on smugglers without offering alternatives to these deprived regions could create negative side effects and rapprochement between smugglers and criminals and could also feed social anger and create a base for jihadist groups in these regions.”

Informal commerce is not limited to one category of merchandise, one geographic region, one demographic; trafficked items include weapons, food products, and gasoline and circulate the country via markets in Ben Guerdane, Kasserine, Sfax, Tunis; smugglers range from merchants of little means to prominent businessmen who are comparatively economically resilient and more likely to withstand trade restrictions imposed at the borders. For many smugglers of lesser means, survival depends upon their ability to navigate a political vision and legal framework5 which serve neither to sustain nor protect them.

2. Nawaat spoke with a specialist in mediation and conflict resolution who shared his impressions after recent visits to the border; in the interest of his work, he has preferred to remain anonymous.

3. Youth and Contraband in the Region of Kasserine: Itineraries of Dispossession and Dynamics of Exclusion. International Alert, April 2015 (Print). Political Scientist and researcher Hamza Meddeb conducted research for the report in collaboration with International Alert staff and other researchers.

4. In Youth and Contraband in the Region of Kasserine: Itineraries of Dispossession and Dynamics of Exclusion, Meddeb’s reference to borders as a “natural resource” is attributed to Smugglers and Saints of the Sahara: Regional Connectivity in the Twentieth Century by Judith Scheele.

5. The Customs Code of 2008 is available on the General Directorate of Customs (Ministry of Finances) webpage.