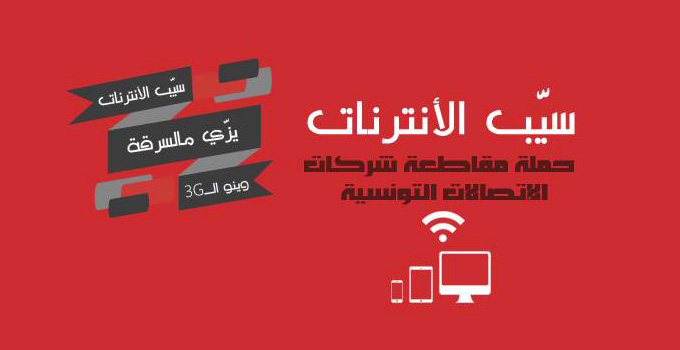 Complaining about expensive prices and bad services is definitely the most repeated talk anyone would hear in Tunisia and the internet is no longer excluded. In fact, internet is not only a tool to gather people for a cause, organize boycott campaigns or even protests. Internet and more precisely slow internet and its cost became the subject of the protest today.

#سيّب_الأنترنات, which literally means let the internet go, is a new campaign started by Tunisian young internet users to claim a better internet service in terms of speed and cost. The campaign has initially been launched on Facebook through an event that reached over nine thousand participant and continues to expand. [Actually, the first event was deleted by the organizers for an unknown reason and a second one was created]

The public use of internet was launched in Tunisia in 1996. However, numerous websites such as youtube, Flickr and political blogs were blocked by the previous regime. And for this reason, the Tunisian internet landscape obviously changed after the 14th of January revolution in terms of free web access, privacy of communications data and even some institutions working rules.

In the process of cutting ties with its previous reputation as an “internet enemy”, Tunisians still blame their government for not showing enough engagement in improving the quality of internet service equally between the regions.

And even though according to the world Bank( Broadband Networks in the Middle East and North Africa: Acceleratin…), Tunisia has one of the most advanced ICT infrastructures in Africa, with the World Economic Forum ranking the country 50th in 2011 in terms of global ICT competitiveness and 2nd (behind the United Arab Emirates) in the Middle East and North Africa (MENA) region, a lot of improvements needs to take place such as enabling holders of alternative infrastructure in Tunisia to offer fiber assets to licensed telecommunications operators, to set up terrestrial cross-border connections and to provide redundant links to international connectivity, by allowing access to existing and future submarine landing stations in Tunisia etc…

On the other hand, the National Telecommunications Instance(INT) has recently published a press release to react to #سيّب_الأنترنات campaign. And According to it a national commission for quality internet service was created in May 2015 to bring together different organizations and associations working in the field of consumer protection and the various players in the ICT sector to define the Quality of Services indicators to be met. The INT also asked the operators to “listen to the changing expectations of their subscribers and move towards improving their quality of service to ensure transparency and visibility to subscribers.”

The campaign participants also claim Telecom operators and ISPs to reduce their prices and most importantly point out the un-coherence between the offers’ promises and the real quality service.

It’s important to mention that, in parallel of all mentioned changes, the internet usage grew rapidly in previous years:

According to the key statistical indicators for the ICT sector reportpublished by the Ministry of Communication Technologies and Digital Economy, the number of total internet subscriptions is estimated to have exceeded 1.7 million in March 2015 compared to 850,8 thousand in 2011.

Nonetheless, according to the freedom on the net report, “internet access remains beyond the reach of a large segment of the population.” And the World Bank report mentioned that

The three telecom operators Tunisie Télécom, Ooredoo and Orange Tunisie provide 3G internet access. And according to the Ministry of Communication Technologies and Digital Economy, the Percentage of mobile internet subscribers rose from 29% in 2011 to over 61% in March 2015.

In front of the dissatisfaction of the users according to the campaign, the INT ensured in its press release that measurements and assessment of the quality of service of mobile 2G and 3G networks are undertaken regularly. The INT also insisted that the results of measurements are published on its website and Facebook page in order to ensure full transparency vis-à-vis the users. The instance explained the difference between the theoretical and actual flow rate by the fact that 3G networks is a shared flow between connected users which may cause a limited flow at peak times.

Two weeks after the campaign launch, the 3 telecom operators took no action and didn’t respond to any of the demands. Meanwhile, the participants keep on sharing explicative videos and posts to raise awareness among their peers and get their voices to be heard.It’s also expected that a representative of the campaign will meet the minister of Communication Technologies and Digital Economy to share the participants’ demands.

One year after another, the ICT field proves to be a reliable alternative for the Tunisian economy during the emerging crises of the tourism sector. However, along with the serious promising steps taken by the ministry of Communication Technologies and Digital Economy, it’s important to highlight the importance of serious reforms and evaluations to improve the internet access for all Tunisians. Not to forget that with the efforts of the civil society such as “we code” project by “youth decides” association to acquire young Tunisians with the necessary skills to work on freelance in ICT fields, as well as the new regulations of special credit cards for developers, the internet should be concerned as an ally against youth unemployment in Tunisia.