I. A European Agenda on Migration

On 13 May 2015 the European Commission released A European Agenda for Migration in response to the thousands of lives lost at sea over the past two years: in 2014, more than 3,500 individuals died crossing the Mediterranean, and 1,000 to 1,500 since the beginning of the year, according to the Commission. EC President Jean-Claude Juncker, Vice-Presidents Frans Timmermans and Frederica Mogherini, and Commissioner Dmitris Avramopoulos—convened in Brussels on 13 May to unveil the Agenda, comprised of a series of “Immediate Action” initiatives as well as four pillars to “manage migration better in all its aspects” long-term.

To try to halt the human misery created by those who exploit migrants, we need to use the EU’s global role and wide range of tools to address the root causes of migration. Some of these are deep-seated but must be addressed. Globalisation and the communication revolution have created opportunities and raised expectations. Others are the consequence of wars and crises from Ukraine to the Middle East, Asia and North Africa. The impact of global poverty and conflict do not end at national frontiers. A European Agenda on Migration.

Following the presentation and publication of information detailing the new plan, an outpouring of vehement criticism has manifested in the form of political cartoons, articles, and biting remarks in mainstream and social media outlets by journalists, researchers, and academics. On 20 May, an open letter called upon European decision-makers to “stop abusing the history of transatlantic slavery to legitimate military and migrant deterrent actions” and instead to “act upon the demands for freedom of movement…” At the time of its publication, 310 university professors, lecturers, and researchers had signed the letter; by the end of the month, the number of signatures neared 550. 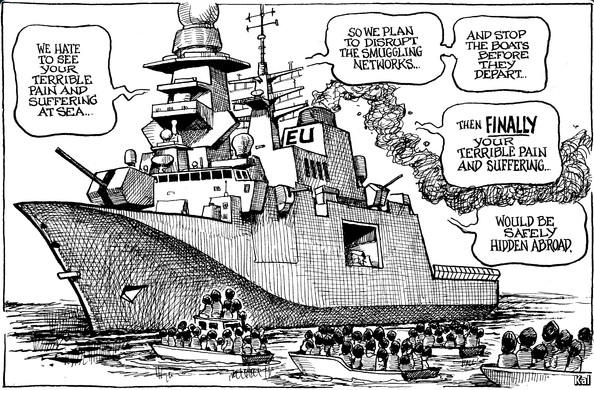 It is not the first time that the European Union agency Frontex, whose mission is “to reinforce and streamline cooperation between national border authorities,” is evoked as an apparatus which functions to save lives at sea. In this context we recall a statement last year by Gil Arias Fernandez, Frontex Executive Director at the time, clarifying that “Saving lives is always an absolute priority, but the Agency’s mandate is to control borders, we do not do search and rescue, even if a border control mission often becomes search and rescue.”

Now the European Commission has proposed tripling the budget for Frontex operations Triton and Poseidon in order to “expand both the capability and the geographical scope of these operations, so that Frontex can fulfill its dual role of coordinating operational border support to Member States under pressure, and helping to save the lives of migrants at sea.” In a response to the EU’s new migration plan, the Euro-Mediterranean Human Rights Network calls attention to this detail: “Although not a search and rescue agency, Frontex takes the centerpiece of the agenda, illustrating the EU’s stubborn security approach to migration.”

II. Tunisia and Migration: The State, Civil Society, and the European Union

Amidst the voices and forces decrying Europe’s migration plan, Tunisian government and civil society representatives have condemned the proposed naval operation to “systematically identify, capture, and destroy vessels used by smugglers.” In a meeting with Portuguese Prime Minister Pedro Passos Coelho in Lisbon on 29 May, Prime Minister Habib Essid referred to the proposed military action as a band-aid solution unfit to resolve deep-seated issues. “The position of Tunisia is very clear in this matter: there are other things to be done before destroying ships, a solution that will not work.”

Tunisia Lacks a Comprehensive Strategy to Manage Migration
As civil society and political forces across the Mediterranean debate Europe’s Agenda on Migration, in Tunisia it is the absence of a comprehensive national strategy, cohesive immigration legislation and designated State institutions that is at the heart of discussions on migration. Since 2011, a number of non-governmental actors have been lobbying for legislation and a national strategy to address and manage migration in Tunisia.1 The Euro-Mediterranean Human Rights Network (EMHRN), Tunis Center for Migration and Asylum (CeTuMA), and International Organization for Migration (IOM) among others have focused on the imperative of legislative reform in compliance with international standards and based specifically upon the protection and preservation of migrant rights as part and parcel of human rights.

On the day that Essid denounced Europe’s proposed naval operation to combat smuggling, Tunisian civil society representatives addressed migration issues in the context of “Mobilization of Civil Society in Relations Between Tunisia and the European Union.” Organized by EMHRN, the conference presented four themes including (1) Women’s Rights and Gender Parity, (2) Justice Reform, (3) Migrant and Refugee Rights, and (4) Economic and Social Rights. On the afternoon of May 29, a panel of representatives (Ramy Khouilli of REMDH, Hassan Boubakri of CeTuMA, and Tarek Ben Hiba of FTCR) from the Migration and Mobility Group reported on “the anger-provoking subject” of migration, a perpetual source of discord between the European Union, governmental authorities, and civil society actors.

Immigration policies and regulation in Tunisia are a patchwork of international conventions, legislation, and accords that have accumulated piecemeal over the years. Last year, months after Tunisia and the European Union signed the Mobility Partnership, EMHRN and CeTuMA published a booklet2 which covers the entirety of Tunisia’s immigration laws. In the preface, the authors indicate that “The multiplication of migratory functions in the Maghreb, and Tunisia in particular, over the past two decades (zone of departure, transit, and immigration) has had the effect of multiplying the status and legal categories of migrants, Tunisians or foreigners, who leave Tunisia, return, transfer, or stay.”

“Fight against illegal migration and human trafficking, readmission of migrants, security of identification and trip documents, border management
“Develop cooperation in the domain of readmission by implementing the existing obligations between Tunisia and EU Member States, namely in that which concerns the identification and issuing of travel documents of persons to be readmitted; conclude an accord of EU-Tunisia readmission in compliance with EU standards in this domain. The negotiation of this agreement will be initiated in parallel with negotiation of the agreement for the facilitation of visas.“From the Joint Statement for the Mobility Partnership between Tunisia, the European Union and its participating member states

On 3 March 2014, the Mobility Partnership Between Tunisia, the European Union and Participating Member States was signed into effect. Human rights activists have denounced a lack of transparency and failure to consult civil society actors during agreement negotiations, the product of which is a text based upon a “security vision of migration.”3 Such a vision is considered to be in contradiction with discourse and objectives advanced by the European Union, and above all with international law and protections for human rights, namely the right to freedom of movement.

Enumerating some of the shortcomings associated with the Mobility Partnership during last week’s conference, EMHRN Maghreb Consultant Ramy Khouili described a “reduced mobility without rights” and pointed out that “partnership” denotes equality, implicitly questioning the mutual benefits of the agreement. Khouili observed that proposals to “facilitate” the granting of visas and mobility between Tunisia and Europe lack specificity. What actions will be taken, for instance, by Member States in order to enforce facilitation? Who exactly shall benefit given that Article 1 describes “an agreement facilitating visas for certain categories of people“? According to Khouili, the measure targets highly-qualified graduates and professionals “who already have relatively easy access to the EU.”

Another point of concern is the Partnership’s readmission clause, since there is currently no (a) national system or laws in place to respond to asylum requests, and (b) no international guarantee to protect migrants from trafficking, exploitation, xenophobia, and racism. As Khouili explained to Nawaat following the conference, “The legal system in Tunisia criminalizes irregular entry and exits which means that readmitted migrants (including third country nationals who have transited through Tunisia) may find themselves stranded and subjected to arbitrary detention, with no legal recourse or possibility of exit.”

In the absence of a national authority or State institution responsible for responding to individuals seeking asylum, the United Nations High Commission for Refugees (UNHCR) has assumed this role in Tunisia. Whereas international standards for asylum-granting procedures are elaborated in the 1951 Convention and 1967 Protocol Relating to the Status of Refugees, there is currently no oversight of the application of these standards.

Draft Law Concerning the Prevention and Fight Against Human Trafficking
In 2003, Tunisia signed the UN Convention Against Transnational Organized Crime of 2000 (Palermo Convention). The text is the foundation of Tunisia’s Draft Law Concerning the Prevention of and Fight Against Human Trafficking which has been submitted to the Assembly of the Representatives of the People (ARP), though has yet to be examined by the designated Commission. According to a press release detailing a Council of Ministers meeting in May, the text in question details the main objectives of a national strategy against human trafficking (see bullet points below). Neither civil society actors nor non-governmental organizations concerned, nor even ARP representatives have been able to provide a time-frame for the review, voting, and promulgation of the law in question.

● Incrimination of all forms of human trafficking as per to international standards;
● Creation of a national authority which shall operate to supervise the implementation of the national strategy and coordinate the efforts of affiliated public and private structures;
● Establish specific mechanisms to provide protection for and offer assistance to victims;
● Reinforce mechanisms to identify victims; help with physical, psychological, and social recovery and ensure fair compensation for injury.