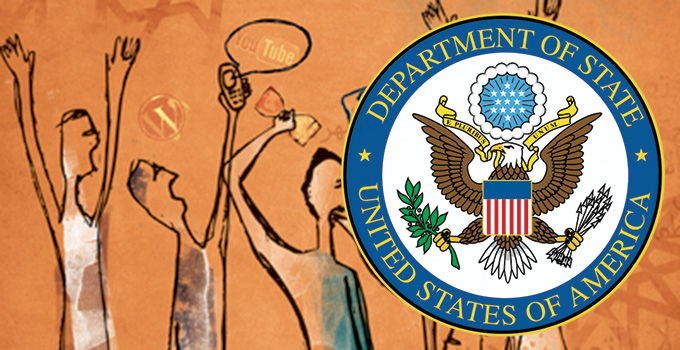 In order to afford public opinion a diversity of outlets and resources, a pluralistic and free media will inevitably produce inconsistencies in facts and information as inevitably as it produces varying accounts of current events and differing perspectives on important issues. And yet excluding journalists and limiting press access to a selected few news agencies at events of public interest is no deterrent for discrepancies in news reporting; this much has been clear since US Deputy Secretary Antony Blinken‘s visit to Tunis on 10 April, a last stop on his trip to meet with government officials in Lebanon, Saudi Arabia, United Arab Emirates, and Oman.

In anticipation of the diplomat’s meetings in Tunis, Nawaat contacted the US Embassy press office who informed us that that there would be no press event, just a brief “photo shoot” with Mr. Blinken after his meetings. So journalists will not have access to the event? No, was the simple and clear reply.

Indeed, what we find in the days following the event are photographs of Mr. Blinken at the Bardo Museum, Mr. Blinken sitting with Prime Minister Habib Essid, Minister of Development, Investment, and International Cooperation Yassine Brahim, Minister of the Interior Nejim Gharsalli, and Minister of Foreign Affairs Taieb Baccouche (the US official also met with Minister of Finances Slim Chaker and Ennahdha Party leader Rached Ghannouchi according to TAP), plus a slew of cut-and-paste reports of which the two original sources seem to be AFP and Reuters. According to AFP, Blinken announced that “…President Obama is seeking to double our security assistance budget for Tunisia next year” to enhance border control and counterterrorism operations. “Some of this will take the form of equipment, weapons. Other parts of it will take the form of training, technical advice coordination, information sharing.” Reuters’ more widely-sourced report indicated that Washington is to increase its military aid threefold this year. “Blinken said the Obama administration would offer the Tunisian army training in border management, the first time it will be involved in training Tunisian soldiers.”

Whether last week’s visit, closed as it was to extensive press coverage, was to be a symbolic expression of diplomatic solidarity and/or the information discussed not intended to be publicly-disclosed, it counts among a growing number of communication mishaps and failures by the US State Department in Tunisia over the past several years. In this context we recall Hillary Clinton’s appearance on Nessma TV in March 2011. Stunned and disappointed by the unfolding of the the US Secretary of State’s first official visit to Tunisia after 14 January 2011, it was ultimately journalists and bloggers not present who produced the most telling accounts of the event. What some had expected to be a dialogue with youth and civil society activists (although there was little indication in Tunisian media ahead of time that Ms. Clinton was to be highly accessible for questions) was in fact a scripted talk-show attended by a hand-picked audience. 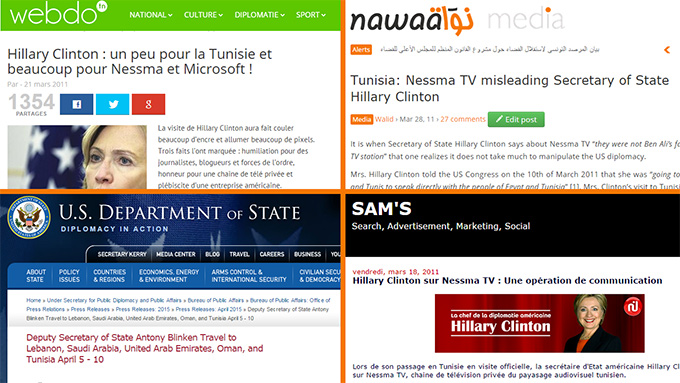 To some extent the disappointment expressed reflects early misconceptions about the nature of Clinton’s appearance on Nessma TV, which did not necessarily claim from the outset to be the interaction that some had envisioned. But general sentiment surpassed disappointment upon the apparent last-minute revision in Ms. Clinton’s itinerary which left journalists waiting for a press conference that ultimately took place at a location other than that which had been originally designated. Graver yet was the US Embassy-issued invitation and subsequent un-invitation of Tunisian bloggers and journalists to the talk-show, with the explanation that Nessma TV had refused their presence among audience members.

The approach of Hillary Clinton’s visit to Tunisia looked more like a short stopover to pursue hidden agendas…A transparent, honest dialogue, even if confrontational, the kind that breaks barriers and builds trust and respect, was missing…The potential participants excluded from the talk were influential activists who were perfectly legitimate to be a part of the cast … and to engage in a dialogue with the head of US diplomacy.Walid, Nessma TV misleading Secretary of State Hillary Clinton

Clinton’s visit to Tunisia in the months following January 2011 was uniquely symbolic, and her lack of interaction with Tunisian youth, activists, and independent press perceived as an affront to those who had been and were determined to challenge the status quo of politics and hollow democracy. In contrast, Deputy Secretary Blinken’s visit one week ago was little talked about prior to the date of his arrival, and remarks in social media since have been minimal in spite of the fact that the promise for a significant increase in US military aid coincides with public and parliamentary discussions concerning the Counterterrorism Draft Law which has been denounced by international organizations, civil society activists, and journalists as representing a considerable threat to civil liberties.

As US plans to triple military aid to Tunisia http://t.co/B2JHaTFb4K press to rein in overbroad anti-terrorism bill http://t.co/zMHfV1GrTf

After Deputy Secretary Blinken’s visit to Tunis on 10 April –
1– Several articles (based on an AFP report) have indicated that the amount of aid to Tunisia is to be doubled next year, while others (based on a Reuters report) have announced that the amount of aid is to be tripled this year. Can you clarify this information?
2 – According to these reports, a press briefing with Mr. Blinken was held at the Kasbah. Who was in charge of organizing the press event (the American Embassy in Tunis or the Tunisian government)? To whom was the event open?

Press Freedom and ‘the agitation it produces’

We recall another event, the year following Clinton’s appearance on Nessma TV, organized by the US State Department in Tunis on the occasion of World Press Freedom Day. On 3 May 2012, Esther Brimmer of the Bureau of International Organization Affairs remarked “that the role of bloggers and new media controls to grow and flourish here,” pointing out that such a transformation reflected the Washington Declaration’s principles, most specifically “ensuring an environment in which media are pluralistic and free from political interference.” Brimmer might have stopped here and ended with what was indeed an aptly cited Thomas Jefferson quote:

The only security of all is in a free press. The force of public opinion cannot be resisted when permitted freely to be expressed. The agitation it produces must be submitted to. It is necessary, to keep the waters pure.

Instead, she finished with, “It is now my pleasure to share with you a message from Secretary of State Hillary Clinton in the context of World Press Freedom Day,” and the irony was complete, absurd even, in light of the “bad buzz” that followed the Secretary of State’s visit the previous year.

Over time it is likely that a pluralistic and free media as evoked in (Article 127 of) the new constitution will manifest in the Tunisian media landscape. Whereas a variety of journalists, news networks, and media outlets ideally represent a conduit of information between and among political classes and the citizenry, this has not been the case in Tunisia where mainstream national and international media are (still) complicit in the divide between the political elite and the people. Certainly a lack of freedom of the press after the revolution can be attributed to a decades-long case of media capture; nonetheless, foreign alliances and Western democracies with a stake in the success of Tunisia’s democracy have been hard-pressed to demonstrate the transparency and effective public communications that are fundamental qualities of any democratic State that is accountable to the citizenry.

Was the US State Department privy to or deceived by Nessma’s finicky selection of audience members for the talk-show with Clinton? Has the US Embassy in Tunis been unable (inundated with press questions?) or unwilling to respond to Nawaat’s multiple requests for information and interviews over the past year? Perhaps the answers to these particular questions are secondary to the imperative that governments invested in Tunisia’s politics, economy, and society be accountable and responsive to citizens. During the past year, contributing writers and journalists at Nawaat covering various issues and events (drones, elections, the role of foreign embassies post-democratic transition, increased military assistance following the Bardo attack) have contacted the Embassy by phone and email. Requests have been politely received with promises of an imminent reply, deferred for the Ambassador’s busy schedule, or, most frustratingly, ignored. At one point in our correspondence with another foreign embassy in Tunis, it was intimated that the American Embassy did not appreciate Nawaat’s work. Needless to say it is at once exasperating and comical when, reaching out to various officials and analysts for insight and perspective on Tunisia-US relations, we are advised to contact the US Embassy. “The Ambassador has given recent press interviews,” wrote one individual in an email exchange with Nawaat; “… have you tried contacting the public affairs section at the Embassy? (Might be best to use your nawaat email account, if you have one.)”

The agitation it produces must be submitted to… An inevitable effect of freedom of expression and freedom of press, the agitation that occurs within a democratic model of governance and society must be endured with a recognition of its role in prompting necessary discussions and debates. Exchange of information, dialogue, and even confrontation and controversy play an important role in informing, challenging, shifting public opinion and, ideally, the decisions and actions of governments. Whether by coincidence or by design, Nawaat has yet to be afforded the courtesy of an informative response from the press office at the US Embassy, yet to be granted an interview with the Ambassador. For over a decade Nawaat has served as platform for journalists, writers, lawyers, students, Tunisians, non-Tunisians to question, think critically, call out hypocrisy, complicity, exploit, corruption. These are the very symptoms of defective governance that were denounced by ordinary citizens, activists and journalists of the so-called Arab Spring, the same individuals whom Western democracies and international agencies have so effusively commended since 2011 for their courage and commitment to changing the status quo. And so inevitably it feels something of a betrayal when these requests for more specific information and questions regarding political motives are consistently held at bay, excluded from discussions, or conveniently ignored. Of course, ignoring questions over time does not necessarily make them disappear from the media or the public conscience; indeed, it is often a confirmation that the answers and associated information are worth pursuing.