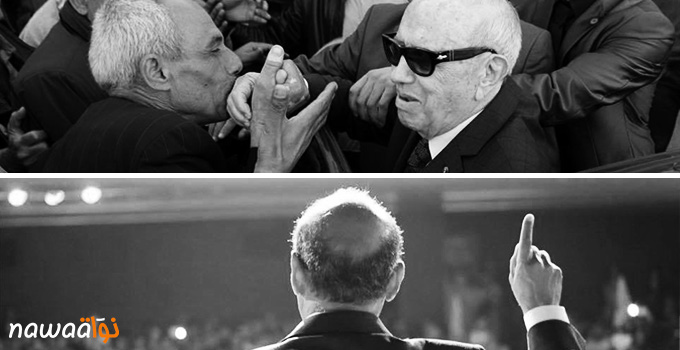 After the kickoff of the second round of the presidential electoral campaign, both candidates Mohamed Moncef Marzouki and Beji Caid Essebsi tried different ways to influence nearly five million registered voters.

In their presidential electoral campaigns, both candidates used the same communication vehicles including public speeches, in-field visits with different number and destinations of visits, press conferences and TV interviews. The slogan of the electoral presidential campaign of both candidates focuses on the word “Tunisia.” Essebsi’s advisors did not change the slogan: «So, Long Live Tunisia», however, Marzouki changed the motto from «We win or we win»–from Laurent Gbagbo’s song which was also borrowed from the Gabonese president Ali Bongo–to «Tunisia Wins». 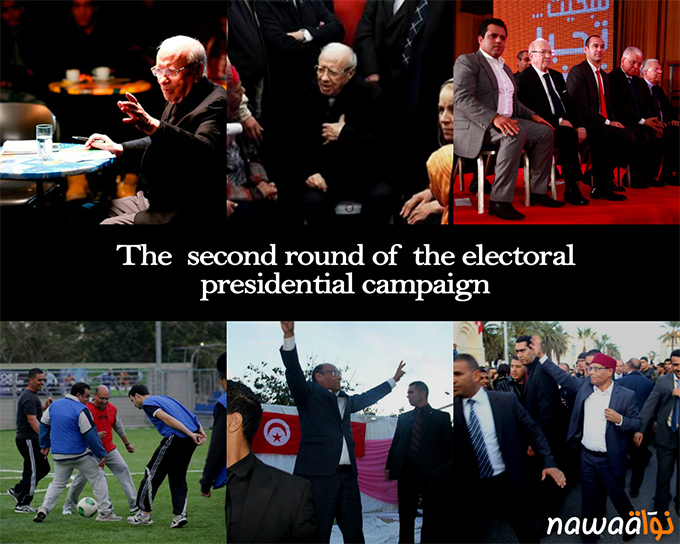 In the first round of his presidential electoral campaign, Marzouki was rigid and strict and he was even following his own portrait as a militant and revolutionary man. By the second round, it is clear that he changed his style when he played soccer and wore a tie in front of his supporters in the dome of El Menzah. What does wearing a red tie really mean for Tunisians? Did he provide employment opportunities to thousands of young unemployed graduates? Did he catch the snipers who killed 300 hundred men during the revolution? Did he release Sofien Chourabi and Nedhir Ktari who were held hostage in Libya for more than 100 days?

Both candidates aimed at addressing youth. Essebsi was chanted “Houmani,” a popular rap song. His younger counterpart Marzouki played soccer with some of his party teammates, CPR. 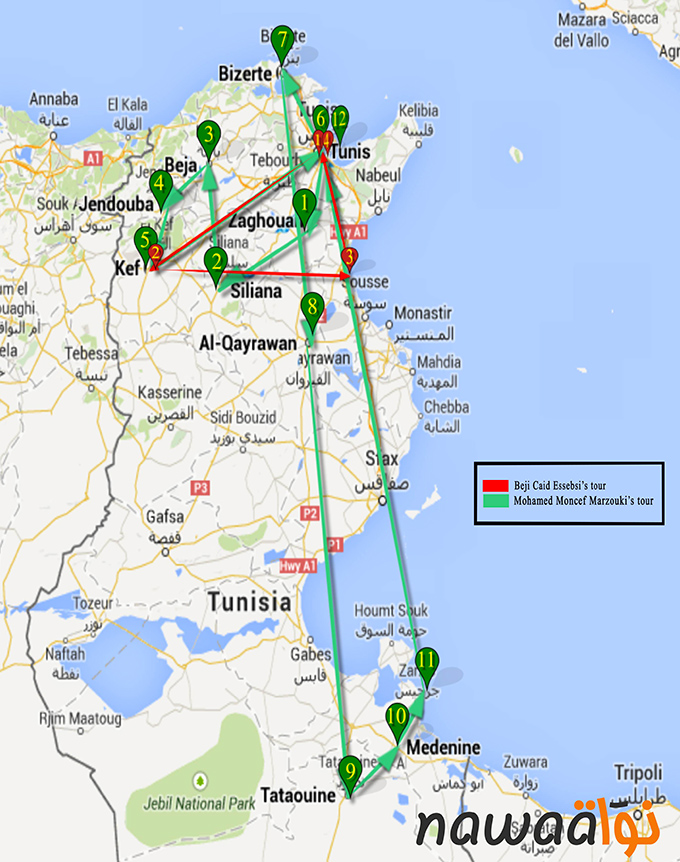 Essebsi started his electoral campaign at “L’Étoile du Nord” a cultural theatre in downtown Tunis where he met young civil society activists.
«Each candidate seeks to collect points by overcoming his own weak points. To eighty-eight year-old Essebsi, it is to win youth voters», Zied Hedfi, senior research associate at the Tunis Leader School, told Nawaat. Marzouki, however, started his campaign from the capital, visiting Beb Souika in downtown Tunis. He also visited cities like Jerba in the south, Beja in the north, and Sbikha in the east.

Contrary to Marzouki, Essebsi preferred to do a short tour through the upper part of the country. Why? We might find the answer to that question in Omar Shabou -former member of the Nidaa Tounes executive bureau- declaration, in a popular prime time talk show called “Liman Yajro Fakat” (for those who only dare) when he said that «the health condition of BCE does not allow him to take on the responsibilities of a president». The next day, Shabou was fired, and the party did not reveal the truth about his physical condition. Marzouki, on the other hand, who published his medical report, was declared fit by the military.

Essebsi visited the shrine Of Sidi Belhassen Chedly, ISIE did not comment

Article 55 issued on May 27, 2014 concerning the regulation of the elections stated that «any type of campaign regarding the elections and the referendum is banned in educational institutions, universities and in worship places». To remove ambiguity, the law should clarify whether a shrine is considered as a religious place or not. In Tunisia, however, a shrine commonly refers to a cultural monument rather than a religious place.

«Essebsi maintains a religious dimension through the constant use of Quotes from the Qur’an in his speeches», Hedfi told Nawaat. «The objective is clear: attracting religious voters».

The message that Essebsi wanted to convey when he visited the shrine of Sidi Belhassen Chedly is that the shrines, many of which were burned and vandalized after the revolution, are part of Tunisia’s cultural heritage, whereas he wanted to send another message to “salafists”: We, Nidaa Tounes, a secular party ranked first in the parliamentary elections, are taking control of everything.

Apart from TV appearances, social media is an effective tool that was used to promote the image and ideas of the two candidates. Exploring the two official Facebook pages, we notice that Essebsi’s social media managers are less active than Marzouki with respect to the publication of audio visual material. For instance, Essebsi’s “L’Étoile du Nord”, discussion was published nine days after he met the young representatives. In the other hand, nearly everything related to Marzouki’s tour and campaign was published, almost timely, on Marzouki’s official facebook page.

Each candidate used different political marketing tactics to impress and to stimulate more voters. The first massively used tactic is the narrative, which is by definition «the story behind a candidate [including] his history and his beliefs». With a history of human rights activism, Marzouki defines himself as an «extremist who defends human rights», “extremist” in this context meaning faithful to a cause. In contrast, Essebsi defines himself as the person to guarantee freedoms and unify all Tunisians.

The other political marketing technique used was negative campaigning or mudslinging. It is, in simple term:

…trying to gain an advantage by referring to negative aspects of an opponent or of a policy rather than emphasizing one’s own positive attributes or preferred policies. “>Wikipedia.

It is very much used by Marzouki, the sixty-nine year-old candidate, who was quick to mention his opponent’s negative points at any opportunity. As an illustration, Marzouki said things like: «my electoral campaign was not based on TV shows», «look at the candidate, he just revealed his program yesterday», or «Abu Iyadh was released in 2011», comments all clearly referencing Essebsi. Another example is the street posting in which Marzouki invites Essebsi to have a televised debate, which the latter refused much to the general public’s dissatisfaction.