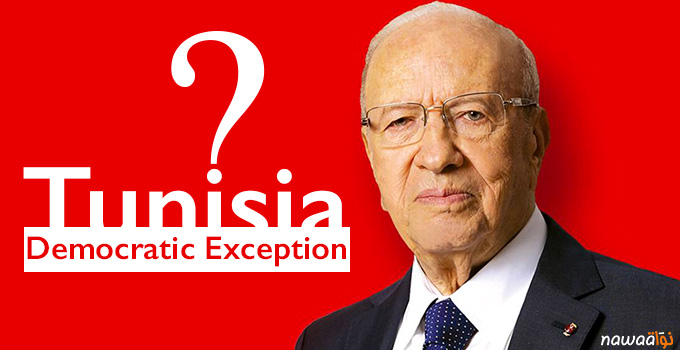 Media coverage of the MENA region is plagued by blanket statements and superficial analysis. International news outlets reserve even the right to name events. The so-called Arab Spring is an example of a de facto forced label. I will proceed to call the events bundled as such, rightfully and as their proponents overwhelmingly agree: Arab Revolutions.

To the matter at hand: Tunisia’s ongoing general elections are hailed as the sole success-story of the Arab revolutions. Democratic transitions are complicated and that statement is a gross Orientalist over-simplification.

The mainstream narrative is that Arab revolutions (apart from Tunisia’s) failed. This is particularly suitable for western influence circles that favor backing Dictatorial regimes in the MENA. Pressing, even “gently”, for better human rights standards becomes futile for the west, since “they“ (Arabs) have proven unworthy of Democracy.

Meanwhile, the quire unites to sing hymns of the Tunisian success. This is so unanimous that I, a Tunisian, find it troublesome to refute it in discussions. Tunisia is not an exotic beach-tourism brochure and there are complex details to the “success story“.

In Tunisia’s parliamentary elections, Nidaa Tounes party emerges in first place. Beji Caid Essebsi (BCE), its leader, is also the likely favorite in the presidential run-offs. And this president-to-be boasts a striking age of 88 years!

According to his Biography on his official website, BCE held high and ministerial offices until 1991. His political career starts in 1952 (even before Tunisia’s independence!). During this period, this candidate trusted with respecting the constitution of the revolution, served under 2 Dictators. Tunisia’s first president, Bourguiba, abolished monarchy to later decree himself ruler-for life, and BCE served as his interior minister in 1965.

In 1987 Ben-Ali lead a medical coup against Bourguiba. He proceeded to reenforce the police-state and liquidate any serious political opposition. Presidential candidate, BCE, presided over Ben-Ali’s farcical parliament until 1991.

In a famous Aljazeera interview BCE responded to a question about rigging elections he overseen as interior minister:”Exactly, Exactly. It is well known [that we rigged elections]”.

Aside from his age and admitting to such grave fraude, BCE fits the textbook definition of a deep-state bureaucrat and cop in the corrupt police dictatorship that Tunisia’s revolution toppled. Put in these terms, the results of electoral process in Tunisia resemble the Stockholm syndrome rather than a democratic success.

It is foolish to imagine that Tunisian politics are detached from regional geopolitical shifts. The reactionary tide against the Arab revolutions is somehow united and public. Some Absolute Arab monarchies of the persian gulf, politically and financially back this reaction in rebelling Arab countries. Under the pretext of combating political Islam, they have been instrumental in maintaining the military coup of Egypt. After coup leader won controversial presidential elections, The aid package from the Gulf countries to Egypt topped an astounding $20Bn!

In Yemen, When these monarchies brokered the “Gulf accords“, they effectively aborted the Yemeni revolution leading to current conditions of failed state. More recently and strikingly, the UAE has been at the forefront of aerial attacks against Libyan rebels. They have provided military backing to Libya’s general Haftar, who is an obscure figure calling for martial rule. Haftar’s military “operation dignity” against most anti-Gaddafi rebels has left Libya in a dire humanitarian state.

This reactionary tide and the petrol-fueled funds behind it have not skipped Tunisia, the birthplace of the Arab spring.

Nidaa-Tounes and its BCE are Tunisia’s General CC (Egypt coup leader) and Libya’s General Haftar. Fundamentally they represent the old dictatorship regimes. In Tunisia, the 88 year old deep state agent paradoxically emerges as the leader of the youngest democracy.

One cannot speak of Nidaa-Tounes without mentioning its supposed arch-rival: Ennahda party. Ennahda came in 2nd in the parliamentary elections and they have not nominated a presidential candidate. While their Islamist base overwhelmingly favors incumbent president Moncef Marzouki, the party leadership has plead neutrality. Pragmatically, that is the closest to backing BCE Ennahdha can get. The fact that Nida-Tounes represents the deep state embarrasses -Ennahda’s leader Ghannouchi. However, signs of rapprochement are becoming abundant: They have just agreed to share the presidency (Nidaa) and the vice-presidency(Ennahda) of the parliament.

Some point out to this agreement as a sign of maturity in Tunisian democracy. It is necessary to remind them that Ennahda backed Ben-Ali’s coup back in 1987. Almost the same party leadership saw it fit to support Ben-Ali, a cop himself, because he “promised” democracy and pluralistic elections. They even changed their party’s name, in February 1989, from the Mouvement de la tendance islamique (MTI) to Ennahdha at Ben Ali’s request. Ben Ali, true to his Dictator title, subsequently repressed Ennahdha so violently that it practically ceased to exist till he fled the country on the 14th January of 2011.

After the revolution begun Ennahdha leadership hastingly regrouped from exile. Astonishingly, in 2011 following the huge sit-in at the Kasbah Square in Tunis, Ennahdha chose to support BCE as an unelected interim prime minister. The promise of democratic participation convinced Ennahda to back a deep-state-cop of 88 unelected prime minister to nurse the frail democracy.

BCE delivered on his promise and handed Ennahdha a government that was unstable and eroded its popularity. Time again, BCE came back to openly oppose Ennahda and reassume power and this time “democratically”.

The deals of Ennahdha with the deposed regime usually involve playing a stabilizing and calming role until the regime is capable of eliminating or undermining Ennahdha. That is the reason Tunisian democracy cannot be entrusted to such a frail equilibrium between BCE and Ghannouchi.

The obvious advantage that the reaction in Tunisia (Nidaa-Tounes) has, is its electoral legitimacy. Unlike Bourguiba’s life-rule and Ben-Ali’s coup (respectively 1st and 2nd Tunisian presidents/dictators post independence), BCE emerged from a democratic process.

However, unreformed and corrupt Tunisian media, trade-Unions, the wealthy class and the deep state apparatus fully backed their candidate. In fact, the phrase containing BCE and democracy is an oxymoron. Akin to a white supremacist presiding the South African government right after Mandela.

The degradation of the Tunisian revolution is not an event but rather a process that is not exciting enough for 24h news networks.

The victory of Nidaa-Tounes and BCE follows obvious reactionary measures such as instituting an unelected government to rule Tunisia leading to the ongoing elections. Which I amply explained amounts to a soft coup. The Terrorism PR game, that deposed Ben-Ali thrived on, is back in full swing. The soft coup government has used Terrorism as a pretext to reinstitute internet censorship body and unlawfully dissolve 157 legal NGOs. The unreformed media manufactures panic to intimidate the public. The discussions on terrorism in Tunisia ignores the relatively small scale of Jihadist activity in Tunisia. They also ignore that “terrorism” technically pertains to violence against civilians and not against the security apparatus (which attacks have exclusively targeted so far in Tunisia).

Quite tellingly, BCE’s rival in the presidential, incumbent Moncef Marzouki does not figure much in the power analysis. While president Marzouki did not go as far as Ennahdha by allying with the reaction, he did not effectively present and develop the case for progressive revolutionary continuation throughout his 3 year rule or his shaky presidential campaign. The incumbent’s rhetoric remained locked in negativity and defensiveness. The younger portion of registered voters largely abstained from the first-round of presidential elections. Which would have presented a golden platform for the candidate who is not 88. Progressive policy promises and youth targeted initiatives are long overdue and the youth-voters are likely to remain untapped to the detriment of Marzouki.

Far from being pessimistic, I hope that Tunisian democracy does not degrade to outright dictatorship. And to sum it all, all that glitters on CNN, BBC and Aljazeera is not all gold.