In Sers, Farm workers struggle against the investors’ abuses 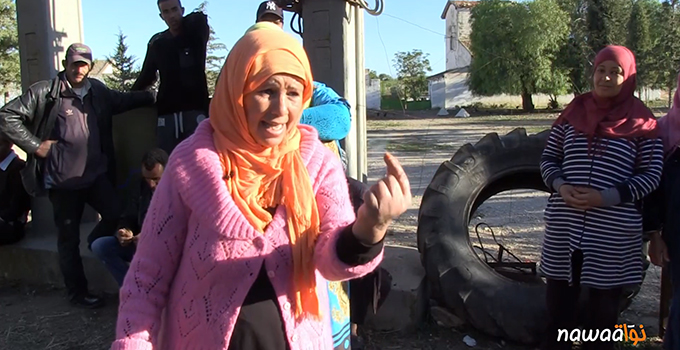 Formerly, it was called the attic of Rome. Nowadays, Tunisia does not manage any more to fill its needs into agri-food sector. The sector suffers, since decades, from a bad management which weakens it. The repercussions of corruption, nepotism and the non-planned privatization carried by the old regime, largely, contributed to this crisis. It is the case of the farms, from Sers to Kef, where farmers have decided to open the files of corruption, reform the sector and create agricultural complexes, like there is, everywhere, in the country.

Between Kef and El Sers, at sight of eye, hectares of agricultural lands are spread out. Formerly, the greenery filled up the eyes and the spirits. Today, the agricultural lands, in their great majority, are forsaken and suffer from a suspect abandonment. Investors who are sulky, a State which does not have any more the means to manage the lands, the small farmers who suffer from the economic crisis and the impotent and weakened farm laborers. These are the reasons that all and sundry evoke to explain the situation.

Tunisia counts more than 300 thousand hectares of state-run lands that were recovered from the French colonists. After the nationalization of this inheritance and the failure of the socialist experiment of Ben Salah, who launched the agricultural cooperatives, the sector knew a light progression. The lands remained in the hands of the state-run office, supervised by the A of agriculture and the Ministry of State Domains & Land Affairs. In 1996, the government decided to intensify the privatization of the agricultural sector.

But the State was not able to ensure a good exploitation of its fields, which was summarized with the extensive farmings (cereals, vine and olive-trees). Contrary to what was awaited, the partial privatization of the grounds weakened the sector and caused high rates of unemployment and the impoverishment of these lands. The abuses, the over-exploitation, and the bad management weakened the agricultural sector. Moreover, the investors accumulated their fortunes, without the least return to the community, as the majority of the debts are not paid yet. The Schedule of conditions of hiring the state-run lands was seldom respected and the control was absent for years.

Under the feudal yoke of the private investor!

Starting from the Large farm of “Fateh”, nothing remains but old empty buildings, even stripped of their doors and windows. Hardly three years ago, it was a hive of dairy milk production, cereal and other goods. The former investor who rented the farm, during 17 years, in agreement with the office of the State, did not leave anything, explain the farm laborers who live on the spot, since decades

He did not only take what he invested, but also what he found in the farms, before disembarking…, specifies one of the workmen.

Here, the workmen of tens of farms protest to remain under the authority of “Edawla ” (the State). After years of suffering, under the régime of Ben Ali, they do not want to be any more under the yoke of the private investors. For them, the investor means a colonizer who confiscates their most fundamental rights.

we are obliged to work day and night, often, without only one day of rest. For wages, each workman is obliged even to involve his wife and his children in the work. If he refuses, he is fired. We are prohibited to raise hens and sheep and even to plant some vegetables in front of our houses. Our children remain without school, as it is located very far from us. And when they grew-up they do not have the right to work with us. The investors, however, bring back, their cousins or people who are not from here all that. This is of course without speaking about the insults, the ill treatment, and discrimination. Our life had been a nightmare…, tells Mansour Jouini with bitterness, who works in the same farm, for thirty years.

Mansour Jouini and his wife live in a small room without a kitchen or a toilet. Their neighbors are under the same conditions. In fact, these dwellings are small permeable shaks which expose the workmen and their families with the hard climate of Kef. Their children cross the fields, every day, in an exhausting marathon to reach school.

We do not understand this situation. Why giving these grounds to private investors? Why does only one gain and hundreds die? Why does the State give advantages to only one man and let the others perish under his authority? Our grounds are generous and harvests are sufficient to everyone…, Dalia Abidi was so shocked, the wife of a workman.

Those who benefitted from the grounds are close to the royal family. The problem lied in the lack of follow-up and the non-respect of the terms of conditions. They rent the grounds with derisory prices; they overexploit them, exhaust the natural resources, and then leave without paying their debts…That goes without speaking about the ill treatment of the labors. Sometimes, we have the impression that we are in a feudal era in which the investor becomes the Master of the ground and the serfs, affirms Adiba Rezgui, one of the young recently recruited by the Office of the state-run lands.

These reforms that never come!

The past traumatisant of the workmen pushed them to protest and take several actions in order to remain under the supervision of the office of the state run lands. On November 12th, alongside their families and some trade union activists, they were opposing the arrival of an investor in the farm. But their resistance was not enough to change the issue and to convince the concerned authorities.

The workmen prefer the State because their workload is less and that there is no control. Whereas the investor exploits the ground and the farm, all long the year and does not limit himself to harvest olives. I succeeded to have the farm of Fateh thanks to my well prepared file, even if the necessary procedures were very difficult and complicated. Now, the blocking of the workmen led by the UGTT will result to nothing. It is necessary to negotiate, and I am ready to integrate all the workmen if the office is committed to regulating their financial rights of the last years…,reassures Moncef Othmani, the new investor, who succeeded to find a compromise with the workmen.

The negotiations between the investor, the Ministry for Agriculture and the UGTT led to the guarantor of the establishment of the farm laborers. The very main request of the dissenter movement which consists in the creation of an agricultural complex, (like the 30 regional complexes managed by the Office of state-run lands) allowing more benefits to the State and a social and economic stability for the working farmers, was not on the agenda.

According to the trade union of the OTD, reforms must be set up in both the office and in the Ministry of State Domains & Land Affairs. Concretely, the office of the state run lands must reform its internal communication, especially between the main administration and the various complexes (which are autonomous on the level of their budgets and administrations). Moreover, the office suffers from a lack on the level of the managerial staff and competent workers. In spite of the great number of graduates, the Tunisian administration does not manage to integrate necessary competent workers to manage its lands. This lack of manpower leaves the lands without control, which causes enormous losses each year.

Generally speaking, the sector needs a strategic vision and a political good-will. The “rebellion” of the farmers of Kef, towards the social injustice, reflected the absence of the State in the sector. If the administration ensures us that it does nothing but apply the law, transparency remains essential to prove its goodwill. Thus, during our report, some data remained inaccessible and the answers of the executives of the office and the Ministry of State Domains & Land Affairs missed precision concerning these problems.

Following the example of farm laborers of South Africa who, in 2013, tore off their rights, our workmen must form a union and form a political pressure force to propose a global alternative which influences the strategy of the State concerning the fair distribution of the wealth.