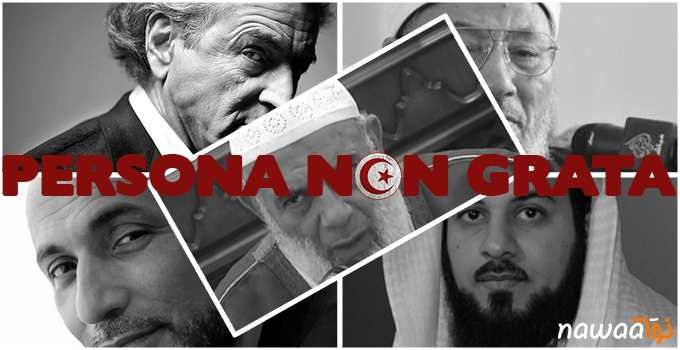 Persona non grata In non-diplomatic usage, referring to someone as persona non grata is to say that he or she is ostracized. Such a person is for all intents and purposes culturally shunned, so as to be figuratively nonexistent. Wikipedia.

It is the public opinion version of personae non gratae (as opposed to the category persons officially banned from a country by the government) which is particularly revealing of Tunisia’s sociopolitical landscape since around the time of the revolution. Towards the end of Ben Ali’s governance, specifically at the time of the 2008 mine protests, citizens have raised their voices against mis- or under-representation by consequential authority figures, be they national —the deposed president, the Troika–or international figures who are received by energetic crowds of demonstrators and cries of “dégage!” Polemical philosophers, theologians, and individuals associated with radical ideologies who provoke protests upon their arrival or an outpouring of public response to their work are as telling of the values and issues that carry the most weight for Tunisians as they are of these controversial figures themselves. 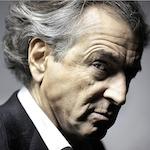 A Google search for «persona non grata + tunisie» brings up news articles on Bernard Henri Lévy’s recent visit to Tunisia. A great deal has been published on the controversies and criticisms regarding Algerian-born French intellectual Bernard Henri Lévy, commonly referred to by his initials, BHL. His name appears frequently in independent Tunisian media, consistently associated with «extreme liberalism and the politics of normalization with the Zionist entity.» An entry for Levy on Wikipedia features an extensive section on criticisms regarding his work, politics, relation to the media, and his personal character, offering context for the name so frequently cited on Nawaat and social media platforms such as Twitter (#BHL) since his visit to Tunisia last week; the collective effect of the information available is an illustration of a charismatic and volatile intellectual whose renown has less to do with philosophy itself than BHL’s strong media appeal. A video circulated on Twitter at the beginning of the month effectively demonstrates this image-based popularity.

After a hostile reception at Tunis Carthage airport and the media polemic that followed, The Huffington Post featured a piece by BHL himself, «My Weekend in Tunis: Anti-Semitic Sound and Fury», in which a translated interview that explains that «[his] visit to Tunisia this past weekend, a trip that triggered many false rumors none of which had anything to do with why [he] made it.»

BHL refuted claims that he had come as a «Zionist agent» or that he had been invited by radical Islamists, emphasizing the latter point with a reference to Rached Ghannouchi as «the most objectional company to be found on the political scene…» A subsequent article by IRIS director of research Beligh Nabli analyzes the hostile reception of BHL in Tunisia: «if the figure that BHL represents is the object of such rejection, it is because he symbolizes Libyan chaos and unconditional support for Israel.» 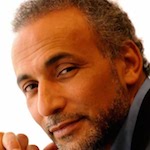 If the public persona that BHL represents provokes a very immediate, visceral reaction and suspicions of political meddling, philosopher Tariq Ramadan’s effect seems to prompt more in-depth, substantial debate on the subject of secularism and political Islam (Compare for example, the frequency and context of references to «BHL» as compared to «Tariq Ramadan» on the Nawaat website). Like BHL, Ramadan is commonly described as well-spoken, duplicitous philosopher whose ideology is more founded upon personal and political interests than historical and social realities. According to Tunisian activist Sadri Khiari, Ramadan is an

…expert in communication and double language… [he] advocates limited and cautious commitment that obscures the fundamental social and political cleavages that divide French society … presents an apologetic vision of Islam and Islamic civilization, an eternal and universal essence that is assimilated into a «global» Islam that has never been a historical reality. Sadri Khiari, Tariq Ramadan, mythology of the Umma and cultural resistance, Nawaat.

In response to an article by Nawaat contributor Adel Tamaalli on The relevance of Western philosophy in modern thought, and vice versa, one reader commented,

The Islamist «philosophers»…like Tarik Ramadan or even Rached Ghanouchi create propaganda through sophism in order to instill their own faith in Western thought, all the while hermetically closing their own minds to honest reflection about the themes discussed.

The grandson of Hassan al Banna, founder of the Muslim Brotherhood in Egypt, Ramadan is often associated in Tunisia with Ennahdha’s Rached Ghannouchi. In March 2013, a panel discussion featuring Ramadan, the French journalist Alain Gresh and Nejmeddine Hamrouni, member of Ennahdha’s Consultative Council and advisor to prime minister Hamadi Jebali then Ali Larayedh, was a highlight of the 2013 World Social Forum in Tunis. For journalist Seif Soudani, Ramadan’s participation was part and parcel of the «more global than social» nature of the event, during which the topic of human rights was «the elephant in the room.»

Ramadan, himself a complex character, and Rached Ghanouchi both describe themselves in the media as representing «the left,» whereas increasingly frequent summits [like Ramadan’s conference at the World Social Forum] of a purportedly social focus reveal a conservative discourse in constant evolution as illustrated by parties whose common affiliation is the Muslim Brotherhood that are at present grappling with power in government. Seif Soudani, Political Review: A forum more global than social, Nawaat.

Cheikhs, «counter-forces of the revolution»

Bedouin disposition of raging against civilization was also instrumental in the shaping of Islam. The modern faces of this disposition, or the beast set loose, are those of Osama Bin Laden and his coterie of terrorists in the al Qaeda network; the mob in the streets of the Muslim world serves the beast as retainers; and Muslim intellectuals and religious leaders such as Tariq Ramadan and Sheikh al-Qaradawi serve the beast as apologists and propagandists. Salim Mansur, Of Danish Cartoons, Muslim Rage, and the Bedouin State of Mind, Nawaat.

In one episode of Nawaat’s «Word on the Street,» Tunisians who said they were against cheiks coming to preach in Tunisia found fault with the very concept of preaching, that it is «not Islam,» that Tunisia has already its own religious heritage and leaders and does not require the influence of other theologians who, according to some, come only to serve foreign interests and politics. 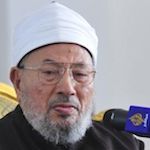 Egyptian-born Youssef al-Qaradawi is known as the «de facto intellectual leader» of the Egyptian Muslim Brotherhood—for which he twice declined an official position—as well as for his Islamic scholarship widely diffused on television via Al Jazeera, online via Twitter, Facebook, and his personal website, and his prolific written works. On 30 October, al-Qaradawi issued a statement on his Facebook page congratulating Nidaa Tounes on its victory and commending Ennahdha for its «noble attitude» regarding the results of the country’s legislative elections.

In Tunisia, al-Qaradawi is known to have greatly impressed Rached Ghannouchi:

To Qaradawi, Ghannouchi has dedicated an entire book … in which he presents with great admiration and without the slightest critique the grand features of Qaradawi’s ideology, completely banalizing his extremist positions and thus implying his unconditional adherence. Khadija Wöhler-Khalfallah, Rached Ghannouchi and the Muslim Brotherhood, Nawaat. 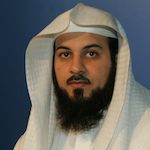 A Saudi Arabian Islamic theologist and preacher, Cheikh Mohamed al -Arifi has visited Tunisia on several occasions; in November 2013 he stopped in a handful of cities throughout Tunisia on a preaching tour during which he spoke at the Faculté des Lettres et des Sciences Humaines of Kairouan. His condemnation of moutabarrijat, women who do not wear the hijab, «added to the polemics over the terms of his invitation to the campus.»

Al-Arifi has become particularly infamous for his alleged complicity encouraging jihad al-nikah, sexual jihad. He has since denied having issued the fatwa posted on his Twitter account sanctioning zawaaj moutaa, a temporary «pleasure marriage» enabling conjugal sexual relations to «reinforce the determination» of fighters in Syria. It is now widely believed that both the fatwa and the ensuing flux of young Tunisian woman to Syria were sensationalized, if not entirely fabricated, at the height of tensions between secularists and Islamists in Tunisia to the end of defaming the latter. 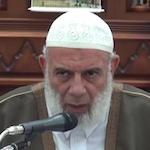 In 2012, Egyptian theologian Wajdi Ghanim was invited by «Islamist associations» to Tunisia for «a series of meetings that were met with real success in the public and the media.» According to a Leaders report, some 7,000 Tunisians came to hear Ghanim’s lecture which was cut short by numerous interruptions while «civil society militants and democratic forces» protested the Cheik’s visit on the basis of this support for female circumcision and his «obscurantist discourse.»

We can recall that, just after Ennahdha took power in February 2012 Wajdi Ghanim was invited by associations close to the Islamist party … Wajdi Ghanim thus showed his true colors by advocating for female circumcision…in Bourguiba’s Tunisia…Tunisian democrats protested against the arrival of this extremist, in particular at the National Constituent Assembly in Bardo, to denounce the incitements to hatred and fitna (discord) of this religious extremist. Z.A., Wajdi Ghanim, friend of Ennahdha, asked to leave Qatar.

More recently, Ghanim expressed his adamant disappointment regarding the results and behavior of political figures in Tunisia’s October elections:

Most political parties, old and some new, do not operate except to the end of being “accepted by the West.” Priorities and demands for the short-, medium-, and longterm have been pushed aside so as to make only enough room for questions of Islam in society, secularism, and national identity, thereby responding to foreign ideological forces that provoke division and the consequential sidelining of the vast majority of Tunisians. Jalila Klout, Creating new political perspectives for a new social and cultural economic model, or accepting the Trojan Horses and the continuity of colonialism, Nawaat.

A Nawaat article (quoted just above) published shortly after the October 2011 legislative elections regains its pertinence in the midst of the 2014 electoral period, offering insight into the controversiality of certain personae non gratae in Tunisia, individuals believed to import foreign conflicts, divisiveness, and polarization where it does not inherently exist. As the recent BHL polemic would seem to indicate, civil society at present is particularly sensitive to external interests that might threaten political processes or provoke social disorder during this tenuous and fragile transition period in Tunisia’s history.

Philosophers, writers, intellectuals, cheiks, preachers…public figures who are known to be articulate and masterful in the art of communication, suspected of using philosophy, religion and ideology as vehicles for personal and political interests, bearing extreme religious or political affiliations, are individuals who incite visceral and fervent reactions (of anger, mistrust, etc.) among Tunisians and public demonstrations of resentment, disapproval, and rejection.