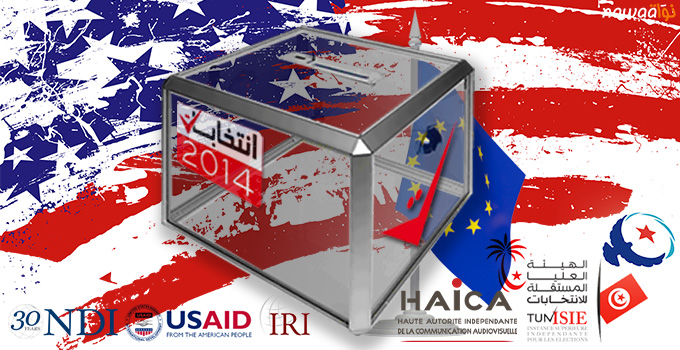 Over the weekend, Nawaat had the opportunity to speak with resident director of the National Democratic Institute (NDI) office for Tunisia, Nicole Rowsell,1 who shared a bit of time as she anticipates the imminent arrival of the organization’s short-term observers for the 26 October legislative elections. Ms. Rowsell elaborated on NDI’s involvement in elections observation and beyond: aside from elections work, the NDI partners with political parties and civil society groups regardless of ideology and contingent upon qualifications of nonviolence, internal democracy (an internal election process, mobility within hierarchy), and pluralism (a willingness to acknowledge and cooperate with other parties and/or associations).

NDI’s observation delegation is comprised of long-term observers (LTOs) who arrived in late June and will remain through January, and short-term observers (STOs), a diverse group of politicians, former elections officials, and civic activists who are to arrive this week. Tunisian political parties and civil society leaders as well as ISIE and HAICA representatives have been invited to contribute to a political briefing for NDI delegates, who will also take part in an intensive review of NDI methodology. A primary focus of the review will be the Declaration of Principles for International Election Observation and the Code of Conduct for International Election Observers which is fundamental to NDI’s elections work and which all observers will sign before dispersing to designated regions throughout the country. Seventeen observer teams will be deployed to meet with local parties before elections day when NDI observers will be stationed at the polls from the opening of voting until votes have been cast and are counted.

Asked about the apparently similar missions and functions of NDI and its sister organization the International Republican Institute (IRI) (both opened offices in Tunisia in 2011), Rowsell clarified that one important difference is methodology: the IRI focuses largely on quantitative research via polling, while NDI conducts qualitative, public opinion-based research through, for instance, focus groups. The relative abundance of articles on the IRI website (the most recent report, Tunisia Elections Dispatch No. 3, was released on Monday) does not necessarily reflect more engagement in this year’s elections observation as we presumed in the preceding article, but is rather a question of preference for different media outlets —IRI blogs, NDI tweets, and the EU keeps its Facebook page for Tunisia updated. Between NDI, IRI, The Carter Center, the European Union (all of whom have deployed long-term observers in Tunisia), as well as the African Union, the Council of Europe, and the Arab League (who are providing short-term observers) there are hundreds of international delegates to Tunisia’s thousands of national observers, according to Rowsell.

NDI’s Tunis office operates separately from the international mission based at the organization’s headquarters in Washington, D.C. As one can imagine, field office autonomy is largely related to distinct funding sources: for its work in Tunisia, NDI receives financial backing from the US Middle East Partnership Initiative (MEPI) and the Canadian Ministry for Foreign Affairs; the international mission is sponsored by USAID. Asked to speak to skepticism around funding from the US State Department for initiatives abroad (as the manifestation of a soft power approach), Ms. Rowsell was adamant about the independence of NDI from the US government and initiatives promoting US foreign policy, explaining that NDI has fought vigorously to maintain its independence during the three-decades of its existence. She further emphasized NDI’s commitment to supporting and complementing local initiatives and efforts for a democratic political process, to carry out relevant work based on principles of impartiality, noninterference, and by offering recommendations and expertise in response to specific requests from Tunisian political and civil society agents.

In the course of our discussion, Ms. Rowsell aptly referred to the surge in international interest and presence in Tunisia for the elections as a networking opportunity for Tunisian political and civil society leaders. Without taking for granted the various advantages that international attention can certainly bring to this particularly precarious period in Tunisia’s history, one must nonetheless remain avidly critical and discerning of foreign actors and interests. It would appear vital not only to do a bit of background and historical research relating to institutions such as NDI, IRI, The Carter Center, the European Union, etc. etc.2, but also to engage with delegations to ask questions, to understand objectives and to notice what-is-being-said in correlation/contrast with what-is-being-done. It suffices, in other words, to observe the observers, to monitor the monitors, and to remain permanently inquisitive about the intentions and integrity of foreign missions in Tunisia as in any country engaged in a significant transition process.

2. For example: one eye-catching detail in the case of NDI’s funding in Tunisia pertains to US Middle East Partnership Initiative (MEPI), cited above. A skim through program «History» on Wikipedia indicates that the Initiative was formed under President George Bush in 2002, and that «MEPI was designed to target areas not served by USAID, the United States’ main foreign aid and development program. Initially dependent on USAID in support of its mission, MEPI has come into its own and targets short-term programs addressing political change in order for USAID longer-term development programs to be successful.» The same Wikipedia entry features two paragraphs on soft power, implying the program’s employment as a mechanism to further US interests abroad.

«Critics say counterterrorism trumps the United States’ Middle East agenda to the detriment of democracy promotion,» Al-Monitor correspondent Barbara Slavin wrote earlier this month. A worth-while read, Slavin’s article, Obama administration downgrades signature Mideast democracy program, published on 9 October, examines changes within MEPI as a manifestation of greater shifts in US policy in the MENA region. Quoted in the article, Tamara Cofman Wittes of the Center for Middle East Policy evoked the idea of «…the re-emergence of counterterrorism as the lens through which US policy is seen and formulated.»