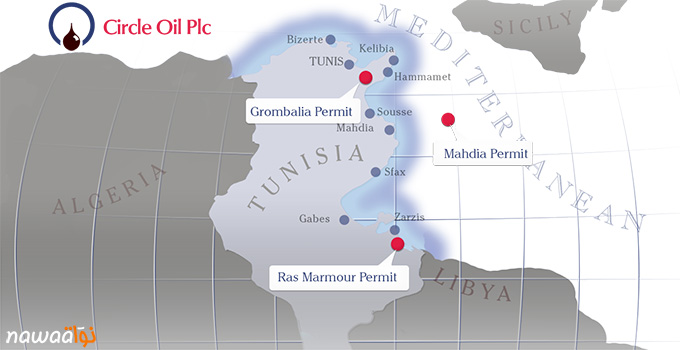 One year ago, Circle Oil Plc issued «an update of its operations in Tunisia» describing its license agreement with Exxoil SA in the Beni Khaled oilfield in the Cap Bon Peninsula:

We are pleased to announce this farm-in1 with a proven discovery and additional potential upside. This farm-in is the start of furthering the Company’s development for the near to mid-term and represents an opportunity to monetise a low risk opportunity in the near-term.

With headquarters in Limerick, Ireland, Circle Oil Plc, an «international oil and gas exploration, development and production company» sealed its nineteen-year agreement in the Beni Khaled Production License Farm-In that earned the Company 30 percent, with the potential to increase its share up to 50 percent, of interest in the Exxoil SA (Tunisia’s «first private exploration and production company») production license in exchange for the provision of a 3D seismic survey2 spanning 50km squared of the License area. At the time, the «undeveloped Bir Drassen discovery, well BDR-1» and «two other undrilled leads» represented «attractive opportunities for both exploration and production» as described in a colorful Operations: Tunisia fact sheet published by the Company in March.

The permit, located within the Grombalia area, has small scale existing production at c.100bopd 3, plus existing gas discoveries. We consider this affords the attractive potential of an underestimation of the existing oilfield and an undeveloped discovery with additional exploration upside.

The acquisition of a 3D seismic survey is planned for 2014, prior to additional drilling.

«A commitment exploration well is planned for 2014 based on interpretation of the 3D seismic acquired in 2013. » Among the three projects outlined in the fact sheet, the Mahdia permit is the source of a growing number of media reports over the past two weeks. The Operating Update Tunisia issued on 26 August presents «the preliminary results of drilling of the well EMD-1 in the Mahdia Permit.»

We are extremely pleased to add this potential large discovery to our portfolio in Tunisia…we intend to take our appraisal effort forward on the Mahdia Permit as quickly as possible following this proof of the El Mediouni petroleum accumulation and will provide further updates of our plans in due course.

The language used to qualify the Company’s findings indicates that the well El Medouini-1, or EMD-1, which was spudded4 on June 8 has fulfilled the Company’s hopes and expectations for potential oil resources– «The stratigraphy encountered in the well was exactly as prognosed and very good light oil shows were encountered» and «The strong hydrocarbon indications encountered in the Birsa and Ketatna carbonates confirm the existence of a working petroleum system» and «The robustness of the El Mediouni trap has also been proven.» The news was immediately propagated by a slew of enthusiastic articles issued on the same day in British media—Circle Oil hits pay offshore Tunisia (Oil & Gas Technology), Circle Oil jumps by a quarter after Tunisia Update (The Guardian), Circle Oil shares soar as company strikes oil in Tunisia (Irish Independent), Limerick company literally sitting on billions (Limerick Post). Two weeks later, such articles have continued to crop up, announcing, for example, Circle Oil tipped to triple (Interactive Investor), Circle Oil to continue expanding asset base (Irish Examiner).

In Tunisian media, L’Economiste Maghrébin published an article on August 29 commenting that:

The riches of the deposit El Mediouini-1 (EMD-1) of the Mahdia permit are not a mirage: after three months of drilling, to achieve to such results is an undeniable success. The miracle was instantly displayed5 on the London Stock Exchange index; within in a few short hours, Circle Oil gained 4.5 points to be sold at 22.25 points.» Y.B., Mahdia-Oil: More than 100 barrels-worth of reserves

Two days later, the same outlet reported, «R. Bouzouada denies the discovery of oil reserves in Mahdia,» explaining that the General Director for the Tunisian Ministry of Industry, Energy, and Mines claims that such a discovery was not possible given that the well had not been penetrated due to technical difficulties resulting in the termination of drilling operations. As per Bouzouada’s claim that Circle Oil had justified the announcement as «nothing but a simulation based on drilling work,» L’Economiste Maghrébin asked if the Irish oil company might not have contrived the results of its drill findings to boost its shares on the London Stock Exchange. Affiliated Tunisian institions and, by extension, Tunisian media, generally sparing in their (public) treatment of issues concerning foreign investment in the energies and hydrocarbon sectors, may in this case be spudding a more valuable “pontential large discovery” than that which has been so vastly and insouciantly associated with Circle Oil’s operations in Tunisian oilfields.

On September 1, ETAP [Tunisian National Oil Company] denies oil discovery appeared on Mosaique FM; ETAP denies the discovery announced by Circle Oil reported Investir en Tunisie the following day, indicating that the information published by the Company and circulated by national and foreign media outlets regarding Circle Oil’s important oil discovery in Mahdia was «false and unfounded.» Nawaat has contacted Circle Oil regarding the confusion surrounding the Mahdia well and is awaiting a response to several questions:

1 – Concerning ETAP’s assertion that Circle Oil’s claim is «unfounded» and in light of the following information presented in Circle Oil’s recent Operating Update Tunisia report which would seem to justify the basis of its announcement of a «potential large discovery»:

«The losses incurred within the target formations, as described below, give further confirmation of high quality permeability … During the drilling of the target carbonates, severe mud losses occurred and multiple remedial operations to restore circulation were performed. This included the pumping of numerous CaCO3 pills, conventional lost circulation material and large volumes of sea water. The hole conditions in the well deteriorated rapidly and multiple attempts at open hole logging by wireline and tough logging conditions equipment failed. Ultimately the decision was taken to terminate further efforts and suspend the well.»

Does the information presented in the 26 August Operating Update Tunisia report in fact constitute the basis of Circle Oil’s alleged oil discovery?

2 – Statements issued by Circle Oil and ETAP corroborate that well exploration took place and terminated on June 8 due to difficulties and the decision to «suspend the well.» The source of discrepancy between ETAP and Circle Oil reports seems therefore to be the nature and implication of the difficulties encountered.

Why would ETAP evaluate June 8 exploration operations as unfruitful, whereas Circle Oil has qualified the outcome as a «potential large discovery»?

3 – One article reports ETAP’s statement that «ETAP has terminated all necessary contractual procedures with the Irish company…» whereas in the Operating Update Tunisia Mr. Green is quoted as commenting that «We look forward to working with ETAP on the next stage of this project.”

What is the current status of the Circle Oil-ETAP contract for the Mahdia project?

4 – Regardless of what has occured at the Mahdia well and with the Mahdia permit, as of 20 March 2014 (according to Circle Oil’s Tunisia Fact Sheet) Circle Oil also holds permits for Grombalia and Ras Marmour.

How does ETAP’s statement above pertain to Circle Oil’s other Tunisia projects? Are operations in Grombali and Ras Marmour affected by the confusion concerning operations in Mahdia?

It’s a game changing week. The Prof6 has over 30 years oil industry experience and will be considering the options on Mahdia and the other prospects on the block.this could create 200p to 500p (unrisked) share of value from this area alone. Oman could be a similar figure.This potential must surely interest Dragon Oil, as it is highly likely that they entered the Mahdia data room. Failure to farmout was nor poor management but lack of confidence amongst the explorers at the moment. The interims will generate considerable interest from analysts. Expect new coverage and further upgrades. This is a truly phenomenal story. We have a very exciting couple of years ahead. All should go to the AGM [annual general meeting] Friday in Dublin to meet the Prof and see his presentation. warrenbuffet2 comment in conversation on Interactive Investor

Bearing in mind that (a) Circle Oil’s direct response to our questions is pending and that (b) foreign investment is naturally and justly for the economic advantages it affords the investor (and hopefully to some degree in the interest of the country in which the foreign company is invested), we must nonetheless consider the overwhelming economic implications–for Circle Oil–of the Company’s alleged discovery. The significance becomes more apparent in the context of a conversation on the website Interactive Investor (II) (member firm 315 of the London Stock Exchange including posts from CEO Chris Green and the «very successful investor…» Warren Buffet, whose comment above draws out the «truly phenomenal» market potential that this discovery promises. Beneath a chart displaying a quote of Circle Oil’s stock values for the day, a string of communications beginning on August 27 and the Twitter comments referenced (included below) constitute a fascinating glimpse into the investors’ perspective.

An advertisement for the September 8 international Invest in Tunisia: Start-Up Democracy conference displayed above an article about ETAP’s denial of the Circle Oil discovery constitutes a stark irony if indeed the Company’s findings have been contrived for the purpose of its advancement in the London Stock Exchange. With the disclaimer that this investigation does not yet include the Company’s answers to our questions, we are nonetheless inclined to reinvoke the question posed by L’Economist Maghrébin based on the abundant enthusiasm expressed in foreign media outlets and the rare response and contrasting contestations of affiliated Tunisian institutions.

Has the Irish oil company played up media hype in order to transpose the miracle onto the market index of the London Stock Exchange? Imen Zine, R. Bouzouada denies the discovery of an oil reserve in Mahdia

1 Farm-in – The process whereby a company joins another company or joint venture participating in a block or field. The company farming in is granted a working interest in the field or block in return for cash and/or a carry through an exploration programme. Definition from OilVoice
2 3D seismic survey – «A seismic survey is conducted by creating a shock wave – a seismic wave – on the surface of the ground along a predetermined line, using an energy source … By analyzing the time it takes for the seismic waves to reflect off of subsurface formations and return to the surface, a geophysicist can map subsurface formations and anomalies and predict where oil or gas may be trapped in sufficient quantities for exploration activities … 3D surveys can be conducted in almost any environment – in the ocean, in swamps, and in urban areas. A 3D seismic survey may cover many square miles of land and may cost $40,000 to $100,000 per square mile or more. The data obtained from such a survey is therefore very valuable, and if protected from disclosure constitutes a trade secret. Seismic datea is licensed, bought and sold by seismic survey companies, brokers and exploration companies.There are three phases of seismic surveys: data acquisition, processing, and interpretation.» John McFarland, How do seismic surveys work?
3 bopd – Barrels of oil per day
4 Spud – the process of beginning to drill a well. Initially a larger drill bit is used to drill a surface hole, which is lined with casing and cement to protect groundwater. After the surface hole is completed, the main drill bit is inserted and the well is drilled to the total depth. Can also be referred to as “spudding in.” Definition from Investopedia.
5 Indeed, the same day that Circle Oil announced its oil discovery in Mahdia, the press release appeared as a Regulatory Story on the London Stock Exchange website.
6 Presumably Professor Chris Green.