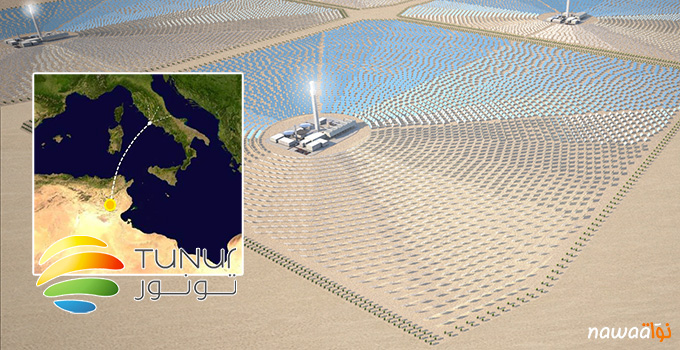 I – Sustainable Development and Solar Energy

A Nawaat article demanding a «sustainable development revolution» in Tunisia outlines some of the most essential reforms necessary in order to comply with the 1987 United Nations Brundtland report definition of “development which meets the needs of the present without compromising the ability of future generations to meet their own needs.” Among equally imperative environmental, social, and economic aspects to consider, the energy sector is the first presented, an appropriate starting point in light of foreign interest piqued by the potential for the exploitation/production of Tunisia’s natural resources (which, in spite of ill-founded rumors regarding the country’s dirth of environmental offerings, represent a strong pull for foreign investors from Austria, Indonesia, and Spain in the exploration and production of hydrocarbons, desalination of sea water for consumption, and preparation and maintenance of natural heritage sites for tourism), particularly gas, oil, and more recently, solar energy.

Energy Strategy: Exploring Solar Potential
Solar energy, of which the potential in Tunisia is significant, must be promoted much more than it is today … the energy efficiency of industrial photovoltaic1 installations and practices must be reevaluated … promoting or requiring photovoltaic installations and solar water heaters in collective buildings should also be considered. This would help especially to counter the peaks in consumption observed during the summer months due to individual air conditioning and the increased energy consumption of refrigerators. Mehdi Oualha, Tunisia: And When the Sustainable Development Revolution?

II – The DESERTEC Foundation and the TuNur Joint-Venture Company

Oualha cites in particular Germany’s interest2 in developing Tunisia’s energy productivity to the end of supplying European markets. The DESERTEC Foundation, a Berlin-based non-profit network of «politicians, academics, and economists» affiliated with the German Association of the Club of Rome, developed the «Clean Power From Deserts» concept that is now the defining vision of a vast and well-documented solar energy project in Tunisia. On January 14, 2012, DESERTEC Foundation announced in a press release that «Tunisian Sun Will Light European Homes by 2016.»

IN THE SANDS OF NORTH AFRICA, the DESERTEC Foundation’s vision for a future where the world’s deserts supply clean and sustainable energy to the whole of humankind is beginning to take shape. The future begins in the Saharan deserts of Tunisia with a project called ‘TuNur.’

«The DESERTEC Foundation is endorsing TuNur and believes that it can serve as a blueprint for the development of further wind and solar projects in the Sahara.» Whereas some of the language may be familiar (such as the Arabian Nights-esqueness of the opening phrase and the designation of Tunisia-as-a-model-for-the-rest-of-the-region), the DESERTEC press release deviates from the conventional one-dimensional focus of recent foreign agency press releases announcing investment in Tunisia’s energy industry in that it emphasizes (as opposed to vaguely alluding to) the local economic implications of the intended project.

Investment will mainly benefit the southern and interior parts of the country, which look set to become a priority area for development for the Tunisian government. The number of jobs created directly and indirectly over the project’s construction and operational period will come to around 20,000. As well as relying on local partners and management for project development and local engineering firms, the project will also create new manufacturing industries. For example, around 825,000 flat plate mirrors and steel structures known as heliostats will be needed for the 2 Gigawatt project and can be manufactured locally.

Founded in November 2011, TuNur Ltd. is a true South-North partnership between a group of Tunisian investors led by TOP Group and Glory Clean Energy (50%) and a UK-based Nur Energie that aims to develop the first utility-scale solar export project between Tunisia and Europe. Mission statement from the TuNur website

Between the TuNur, DESERTEC, and Nur Energie3 webpages, there is an abundance of technical information and background on the project’s developers and shareholders. Since the publication of the DESERTEC Foundation press release in 2012, the initial undertaking and plans for the TuNur project have been well-diffused in foreign and Tunisian media (the Nur Energie website features articles from La Presse de Tunisie, El Maghreb, and TunisiaLive, and Nawaat also published a related piece in August 2012), though subsequent project developments have not. The most recent detailed article from February 2013 in The Energy Industry Times projected,

Under the current timetable, project engineering and the project consortium will be ready in the second half of 2014, with project financial close scheduled for the first half of 2015,

Multilateral banks will be a cornerstone investor to the project, with the African Development Bank and the World Bank Group already actively engaged in the project’s evaluation. Discussions have begun with commercial banks and selected strategic equity investors.

These two points prompt important questions regarding (a) progress of and (b) funding for project development since 2013 especially in light of the relatively unpredictable political climate of democratic transition and owing to the polemics associated with the financial institutions concerned. Nawaat has contacted both the DESERTEC Foundation and Nur Energie requesting more information, though only the latter has indicated its intentions to respond responded to the following pertinent questions:

1 What are the project developments that have taken place since the DESERTEC Foundation announced its endorsement of the project in January 2012? According to the Energy Outlook article on the Nur Energie website, «the project engineering and the project consortium will be ready in the second half of 2014, with project financial close scheduled for the first half of 2015.» Has progress unfolded as projected?
2 Regarding the exportation of electricity to Europe; what is the primary reason for energy exportation (as opposed to autoconsumption)? Clearly, the fact that «Tunisian law prevents any company other than state electricity supplier from selling electricity in the country» answers this question, but would the exportation of the energy produced still be a priority if the law were different? In other words, are the associated economic benefits of energy export so great for Tunisia that one hundred percent of the energy produced by TuNur is better designated for consumption abroad rather than for consumption within the country?
3 To what extent has the uncertain political climate affected project developments? In several projects involving foreign investors/companies in Tunisia, project developments are frozen or delayed due to bureaucratic/administrative inefficiencies. Have these sort of challenges come up in the realization of TuNur’s activities and plans?
4 Regarding project funding: are the African Development Bank and the World Bank Group still active in project evaluation? If so, how do their standards and requirements complement/contrast with the DESERTEC Foundation’s evaluations? Is there any overlap with respective project evaluations and/or is it difficult to comply with both the Foundation’s criteria and those of multilateral banks? Are there other institutions who contribute to project funding?

Read TuNur’s response to our questions

In spite of the fact that it is the smallest Maghreb country, photovoltaic energy is one of Tunisia’s most precious resources. Owing to its geographing setting, the North African region receives an elevated solar radiation (1.600kWh/kWp à El Menzah, 1650kWh/kWp à Carthage et 1.720 kWh/kWp à Djerba), which renders it a real paradise for installation companies specializing in photovoltaic energy. Press Release, 14 July 2014, Kannich Solar.

The notable difference between DESERTEC/NurEnergie and Krannich Solar in Tunisia is the intended consumer base for the energy produced. Whereas the former is explicitly focused on developing a source of solar energy to supply European countries, the latter appears to be dedicated to meeting Tunisia’s growing energy needs. Citing data from the Office of Economy and Commerce of the Spanish Embassy in Tunis, Krannich Solar reports that the Tunisian government aims to instal 36MW of photovoltaic power by 2016. In 2011, the country’s first factory of photovoltaic pannels opened with a capacity of 25MW.

Lack of Transparency and Collaboration
What these collaborative ventures have in common (aside from affiliation with German companies which is not surprising given Germany’s leading status in the development of photovoltaic energy systems) are public visibility—in the form of informative webpages complete with diagrams, photographs, and videos—mainly via the media and marketing strategies of the foreign agencies involved. A lack of transparency on the part of affiliated Tunisian institutions (Top Oilfield Services does not appear to have any indication of their efforts in the TuNur project, while Glory Clean Energy does not seem to have its own website) coincides with bureaucratic and administrative inefficiencies, uncooperativeness, and unresponsiveness to potential partners, investors, and consumers. Referring to the German DII (Desertec Industrial Initiative), Oualha writes in his article on sustainable development,

The administrative delays suffered by industrial and other sectors mentioned by the DII must be fought in order to promote these kinds of innovative projects. It is therefore surprising to have seen the UGTT push to exclude the private sector from the field of renewable energies, allowing the opportunity for scientific assesment, an apparently iron-fisted approach to indicate who is in charge.

Upon its endorsement of the TuNur project in 2012, the DESERTEC Foundation itself identified the same quality of exclusion, which it attributed specifically to the «public and non-administrative» Tunisian Company of Electricity and Gas (STEG) that is affiliated with the Ministry of Industry, Energy, and Mines: «The role of the STEG, as a public monopoly for electricity, must be to better collaborate with private initiatives.»

Over the past several years in which foreign agencies have invested in the development of Tunisia’s energy sector, partnerships are often characterized by lack of detailed, up-to-date reporting on project negotiations and implementation especially by Tunisian state and private institutions and, by extension, media outlets. The production of solar energy in Tunisia, referred to of late as a promising renewable energy source to be cultivated both for autoconsumption and for export, would certainly move the country closer to adopting the sustainable development practices that Oualha describes, and might also evolve into an industry that provides local employment and revenue in some of the regions that Nawaat contributor Samih Ben Okkez discusses in a recent article on Tunisia’s economically- and socially marginalized populations. Relative to concurrent joint-venture projects concerning Tunisia’s natural resources, TuNur’s undertakings have been well-illustrated and well-marketed abroad, and even modestly recognized in Tunisian media. Focusing their expertise and vision for clean, renewable energy on Tunisia, DESERTEC, Nur Energie, and Krannich Solar are infusing new meaning into the heretofore metaphorical designation of the country as the «bright spot» of the Arab World as it may well soon be the bright spot of solar energy for the Western World.

1 Photovoltaics is the direct conversion of light into electricity at the atomic level. Some materials exhibit a property known as the photoelectric effect that causes them to absorb photons of light and release electrons. When these free electrons are captured, an electric current results that can be used as electricity. Gil Knier, How Do Photovoltaics Work? Nasa Science News
2 According to a Photovoltaics Report published in July by the Fraunhofer Institute for Solar Energy Systems ISE, «In 2013, Germany accounted for about 27 percent (35.7GWp) of the cumulative PV capacity installed worldwide (134GWp).” (pp 5)
3 DESERTEC and Nur Energie are the primary names associated solar energy development in Tunisia; an article from the Global Construction Review earlier this month on The Electrification of Africa noted that «The Tunisian solar plan includes 40 projects that are intended to reduce the country’s reliance on gas, which now makes up 90% of its energy mix. The biggest scheme is Nur Energie’s 2GW concentrating solar plants.» The article features two maps respectively comparing present and projected Kilowatt hours per person per year, ambiguously (and distastefully) entitled «Africa 2013: The Dark Continent,» and «Africa 2020: Dawn Breaks…»
4 Solar (PV) inverter – converts the variable direct current output of a photovoltaic solar panel into a utility frequency alternating current that can be fed into a commercial electrical gridor used by a local, off-grid electrical network. Definition (modified) from «Solar Inverter,» Wikipedia