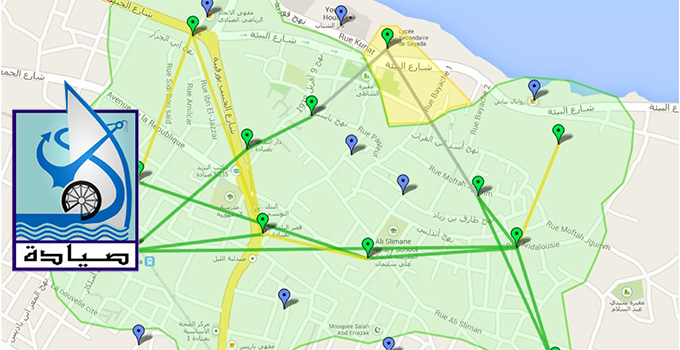 Propagation of Mesh Networks
Global surveillance programs, USAPatriot Act, National Security Agency (NSA)…the United States has become famously associated with questions around «mass surveillance, government secrecy, and the balance between national security, and information privacy.» Since Edward Snowden leaked classified documents to The Guardian one year ago, suspicion is implicit in speculations about State Department initiatives which have proven to operate with a consistent lack of transparency that is characterstic of its political subversion and soft power tactics abroad.

US Promotes Network to Foil Digital Spying that appeared in the International New York Times last month about the propagation of mesh networks in America, Cuba, and Tunisia elicited comments and opinions of American readers concerning US surveillance operatives and digital privacy and security issues. «The State Department provided $2.8 million to a team of American hackers, community activists and software geeks to develop the system, called a mesh network, as a way for dissidents abroad to communicate more freely and securely than they can on the open Internet …» Tunisia’s Mesh Sayada project is presented within a broad examination of networks featuring Commotion, «a free, open-source communication tool» developed by the Open Technology Institute (OPI) of the New America Foundation in Washington, D.C.: «A group of academics and computer enthusiasts who took part in the 2011 uprising in Tunisia that overthrew a government deeply invested in digital surveillance have helped their town become a test case for an alternative: a physically separate, local network made up of cleverly programmed antennas scattered about on rooftops.»

Tunisia’s Mesh is not Cuba’s ZunZuneo
American media reports on Mesh Sayada and (American) reader responses are heavily if not exclusively concerned with privacy issues and the US’ inherent political interests in any project it funds at home or abroad, suspicions piqued after Snowden’s revelations last year but even more so in this case because of an Associated Press report in early April that exposed a US-funded and -designed social media platform in Cuba. According to the AP, «more than 1,000 pages of documents about the project’s development» indicated beyond doubt ZunZuneo was a covert, political undertaking:

…the plan was to develop a bare-bones “Cuban Twitter,” using cellphone text messaging to evade Cuba’s strict control of information and its stranglehold restrictions over the Internet … operators would introduce political content aimed at inspiring Cubans to organize “smart mobs” — mass gatherings called at a moment’s notice that might trigger a Cuban Spring, or, as one USAID document put it, “renegotiate the balance of power between the state and society.” Butler, et al., US Secretly Created ‘Cuban Twitter’ to Stir Unrest

In the wake of Tunisia’s ‘Arab Spring,’ an American who draws his news information from one or two mainstream media outlets might assume that a similarly politically-motivated project would naturally be implemented in a North African country undergoing ‘democratic transition.’ Although the article does present the mesh network in Sayada as disseparate from the wolf in sheep’s clothing social media platform developed in Cuba and by extension as less enmeshed in privacy and political issues («It is clear that the United States sees Sayada as a test of the concept before it is deployed in more contested zones,” the authors posit), the dialogue that follows the article does not generally refer to the Sayada case apart and is composed of comments regarding US manipulation of surveillance and interference in information privacy. While the New York Times may not emphasize the distinction, a piece from the Miami Herald clearly states, «In contrast to Cuba, which has branded the USAID programs as thinly veiled efforts toward ‘regime change,’ the Tunisia program was launched in December with the approval of authorities in the town of Sayada.»

A ‘Healthy Digital Media Ecosystem‘
«The citizens of Sayada — population 14,000 — are more focused on using the mesh for local governance and community building than beating surveillance since President Zine el-Abidine Ben Ali was ousted in 2011,» Nizar Kerkeni of Sayada told the New York Times. What is missing for New York Times readers to understand the Sayada case is precisely the information that is accessible through the town’s digital presence, namely its VilledeSayada official website, Sayada Facebook page, and Sayada5035 Twitter account. It suffices to read the Case Study: Mesh Sayada by the OPI to understand the development and application of Tunisia’s first mesh network. Naturally the particularities of Sayada’s technological dynamism is secondary to the interests of the New York Times article which therefore does not convey the groundwork and atmosphere of digital innovation that followed the revolution and necessarily preceded the undertaking of Mesh Sayada. A Tunisie Haut Debit article published after the installation Commotion equipment explains, «The town of Sayada is a pioneer in the diffusion and full transparence of its spending, tax revenue, and decisions of its delegates through the portal VilledeSayada.tn thanks to the help of the town’s OpenSource community members…”

That the project may or may not be part of a greater political plan is a possibility that does not weigh heavily in the conscience of Sayadans, Nizar Kerkeni told Nawaat. Indeed, Kerkeni, President of CLibre, an association for ‘free digital culture,’ describes Mesh Sayada, the fruit of collaborative work carried out by OTI, CLibre, and local volunteers, as the “cherry on top.” That is, the mesh network is a supplemental service for citizens, a means to enhance an already active and productive technological culture out of which CLibre has grown. Quoted in the Tunisie Haut Debit piece, founding member of CLibre Habib M’henni explained, «…we approached the subject of how to strengthen citizen participation thanks to Open Gov … from there we had the idea to create a local Wifi network that would be accessible to everyone without exception.»

The New York Times article writes to an understandably oversensitized-to-the-US’-incorrigible-subversive-and-soft power-endeavors public and accordingly prompts criticisms of the utility and security of mesh networks such that both the article and the ensuing dialogue are based upon generalizations and the overlooking of consequential details. That the Mesh Sayada case study has been presented in the context of US surveillance operatives is relevant to one discussion but is meanwhile a superficial and imprecise presentation of the project for citizens who participated in its development and constitute its user-base and to whom it therefore belongs. The mesh network was not brought to Sayada; it was built in Sayada as a collaboratively-implemented initiative to promote Open Source and Open Data principles.

The most pertinent questions today about this case study are not related to Commotion’s «original aim—foiling government spies» as one is wont to presume from the New York Times piece, but how it is progressing according to the project objectives set out in OTI’s Mesh Sayada case study which aptly predicted the eventual need for further technological developments to accomodate network expansion. According to Kerkeni, CLibre anticipates future collaboration with OTI for adapting and advancing the network, specifically in order to connect the local mesh intranet to the worldwide internet, as well as to devise a plan of action for sharing the town’s technological experience with other municipalities:

This is a project that enables civil society to revitalize social, cultural and economic life in the most removed regions through free network access, even if it remains local. A model to be followed by Tunisia’s other regions. Welid Naffati, The Town of Sayada Inaugurates the First Free Community Wifi Network in Tunisia

A model to be expanded to other regions, not, in this case, through the subversive political operations of a foreign government, but through community initiatives and technological innovations pioneered in Sayada to promote decentralized, transparent local governance and to build healthy digital media ecosystems.