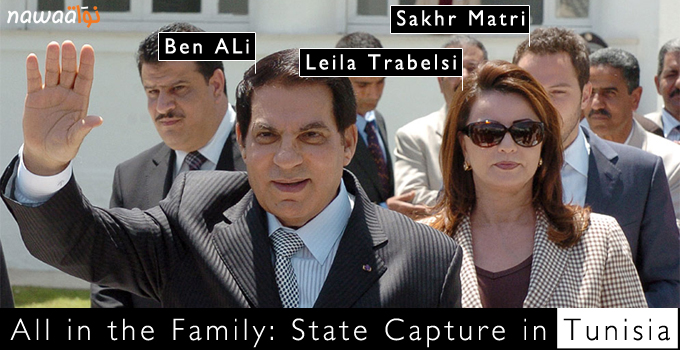 Regulations can protect consumers from monopoly pricing or dangerous products, protect the rights of investors, direct resources to underfunded sectors, and promote growth. But regulations can also be captured.page 24, All in the Family: State Capture in Tunisia

«North Africa is no exception» to the new age of crony capitalism, Bob Rijkers points out in a World Bank Blog article about the new report on economic corruption in Tunisia.

The Report
The World Bank has released a report that investigates the economic corruption in Tunisia between 1987 and 2010 under the Ben Ali regime. All in the Family: State Capture in Tunisia co-authored by Bob Rijkers, Caroline Freund, and Antonio Nucifora, is a study that sets out to «identify the relationship between investment policies and the business interests of Tunisia’s politicians (2).» Its three-fold approach is to:

In order to study the «relationship between regulation and the performance of politically connected firms (8)» the authors analyze the evolution of the Tunisian Investment Law (Code d’Incitations aux Investissements) from its creation in 1993 through its twenty-two presidentially-decreed amendments. The authors cite the case of McDonald’s—which the Ben Ali government refused to accept into the food market—to exemplify that the Investment Law has made it significantly difficult for foreign entry into Tunisian markets: «Restrictions on foreign entry likely limit foreign competition and can also be used to direct foreign funds to certain domestic firms (10).»

Theories on the dynamics of corruption, rents, and regulation (2) provide the analytical framework for the data assembled from national records and statistics which indicate that Ben Ali firms tended to operate and were more profitable in regulated sectors than unregulated sectors: «…performance differentials between Ben Ali firms and their peers are significantly larger in sectors subject to authorization requirements and FDI restrictions. The results show that these entry regulations are associated with greatly enhanced size, output, market share and profitability of Ben Ali firms. These results are indicative of regulatory capture (17).»

Decision-making authority over investment laws can be confidently attributed to Ben Ali since changes to the Investment Code were made by decrees signed by the President himself. page 3, All in the Family

The authors are clear about the quality and reliability of their resources and are equally «aware of the limitations of administrative data (8)» that they source from the National Institute of Statistics, the tax authorities, the Investment Law, and the confiscation commission at the Ministry of Economy and Finance. Allusions to the irrefutability of certain data are associated with the fact that it is sourced from the commission that was formed in 2011 to undertake the confiscation of the Ben Ali clan’s assets. «A major advantage of using data from the confiscation commission is that there is no ambiguity as to whether these firms were indeed politically connected to the president (6).»

Ben Ali family corruption was widely known and was a source of palpable frustration for the Tunisian public, as evidenced by the targeted and systematic looting of Ben Ali family holdings after the 2011 uprising.Press Release, World Bank News

According to Rijkers, Freund, and Nucifora, the new report represents quantitative data necessary to supplement the already-existing abundance of qualitative resources that document economic corruption under the Ben Ali government: «While media reports about the nefarious practices of nepotistic autocrats abound, very little quantitative information exists on the prevalence and economic significance of state-business relationships in the region (5).» The study not only provides a more complete examination of the Ben Ali family’s economic activities, reiterating with numbers, statistics, economic expertise and analysis what is already known and accepted, but also confirms what information does exist «The quantitative evidence we have presented also resonates with qualitative evidence on corruption in Tunisia (23).»

The World Economic Forum repeatedly ranked Tunisia as the most competitive economy in Africa and the IMF as well as the World Bank heralded Tunisia as a role model for other developing* countries. Yet, the Tunisian model had serious flaws; unemployment and corruption were high over the period studied, and contributed to Ben Ali’s downfall.page 3, All in the Family

That this report diffuses information which was previously (publically) inaccessible is a feature not to be overlooked or undervalued**. Indeed it is arguably the study’s greatest and most pertinent quality. It would seem, in the wake of revolution and the unfolding democratic transition, that the study’s objectives are relevant, its approach and resources transparent, its conclusions meticulously drawn and a valuable contribution to common knowledge and future research. Of course any academic work worthy of praise is equally worthy of (ideally constructive) criticism, and in this case the latter concerns a subtle but noteworthy contradiction associated with the confused designation of Tunisia as victim of state capture and as a role model for other countries. The nuances here are timing and nomenclature. Yes, Tunisia was a ‘captured state’ and, yes, Tunisia is an internationally-touted role model in the Arab world, that is, since Ben Ali was ousted three years ago and the country has moved from dictatorship to revolution to democratic transition. Tunisia could not, during the time that the country was internationally praised for its economic status and before the drastic changes that began in 2010, have been a role model for other countries while it was stifled by ‘state capture’ of which the World Bank, who has been involved in development projects in Tunisia for over fifty years, was doubtlessly aware.

Needless to say that this critique is applicable beyond the scope of the report; In a World Bank Blogs article announcing the release of the new report, co-author and Lead Economist Antonio Nucifora’s response to comments addressing this contradiction confirm and clarify the ambiguity in the article which is indicative of the greater, underlying discrepancy that exists at the institutional level:

At the World Bank, we clearly were not immune to getting behind the image the Ben Ali regime tried to create for itself. And while we regularly detailed the regulatory failures, the barriers to entry, and the privileges of the old system, this was often masked in bureaucratic language that did not get to the heart of what was clearly a system asphyxiated by its own corruption. It’s certainly a lesson we’ll take forward and it’s one of the key reasons we’ve put access to information, transparency, and accountability on the top of our agenda with Tunisia (and across the region) since the revolution.Antonio Nucifora, response to commentary submitted to article All in the Family

**Significantly the report has been published in English only, meaning that, whereas much of the data presented and analyzed in the study is available in Arabic and French through the Ministry of Economy and Finance, the report itself is accessible exclusively to English-speakers.