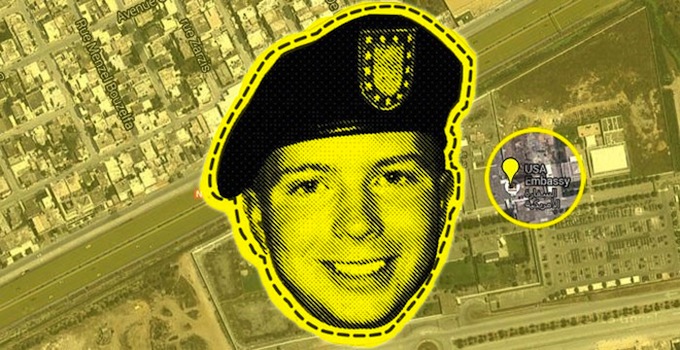 A Tribute to Chelsea Manning from Tunisia

This tribute appeared originally on Medium on August 27th, 2013.

What we call the Arab Spring was the result of many seemingly small things, butterfly effects. One of them was a courageous woman named Chelsea Manning. If the U.S. will take 35 years from Chelsea Manning’s life, may it console her that she has given us, Arabs, the secret gift that helped expose and topple 50 years of dictatorships.

For me, it all started in mid-October of 2010, with a direct message on Twitter from a good friend of mine. He belonged to a circle of digital activists with whom I worked closely with for years on many advocacy projects in the Arab World, from anti-censorship strategies and campaigns to building and training non-violent protests movements. In that DM he urgently asked me to speak over encryption with him. After one single OTR chat session, he sent me an encrypted zip file containing a trove of around 400 texts files organized in about 15 folders. All the folders were named after Arab countries: Tunisia, Egypt, Lebanon, Saudi Arabia, Yemen, Morocco, Bahrain, etc. I didn’t know what was in them. He told me just before ending the chat session: do something with them, I trust you and trust your knowledge and judgment.

At that time I was based in Berlin, after having to flee my home in Tunisia 13 years before to avoid becoming a political prisoner. I had a position as Advocacy Director at Global Voices, a non-profit that supported international citizen media. That gave me the freedom to choose where I lived; I just needed a laptop and a good Internet connection. I’d also co-founded nawaat.org seven years earlier, a collective political blog focused on Tunisia, and censored in Tunisia by the government of Ben Ali.

I went out with my laptop and sat on the terrace of Morena cafe in the anti-establishment and counterculture neighborhood Kreuzberg. By then, I was one of a handful of people on the planet who had access to this sensitive dataset. I jumped into Tunisia’s folder, opened the first file and lit a cigarette, then the second file, the third, and the rest of the thirty files related to my country, with almost the same number of cigarettes. It was the Wikileaks U.S. State Department Cables, widely known as Cablegate, with all the political scandals, nepotism, and corruption of the disgraced Ben Ali regime. I didn’t have time to read the other Arab countries’ files. I knew I had in front of me a valuable set of documents that could be turned into action. This is what we were looking for during the last decade of strategizing and theorizing about citizen dissent media, diaspora media, exiled media, digital activism: the ability to inform and transform. This was momentum. 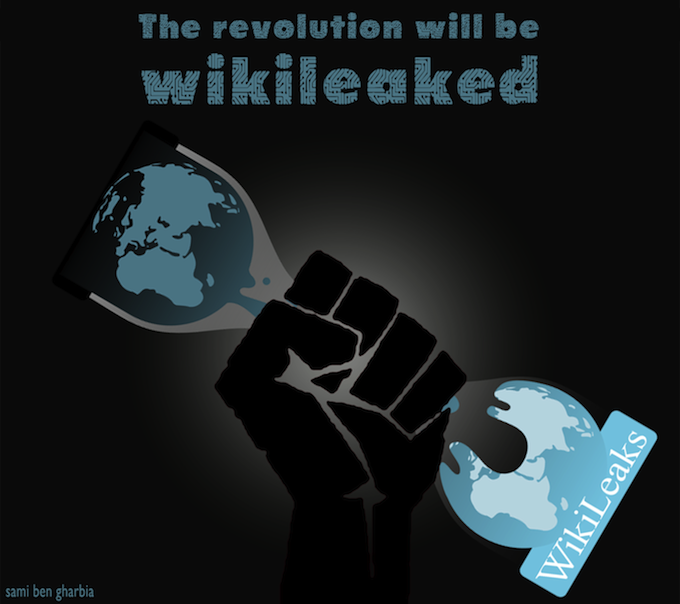 I messaged my colleagues from Nawaat with a link to a password protected Dropbox zip file, asking them to read the documents and meet on Skype the same evening. We knew that neither Skype nor Dropbox was secure, but we needed to share, talk, and plan our next step. We had always worked like this. But we knew the cables would be different in scale and impact.

I remember how enthusiastic that Skype conversation was. We knew that what we had in our hands, and in the cloud, was about to change something for Tunisia and beyond. Something big. We finished the conversation with the tasks laid out for everyone and a name for the project: Tunileaks. Riadh Guerfali (aka Astrubal), the law professor & computer scientist who founded Nawaat with us, would take care of summarizing the files in one clear and digestible article that would announce the release of the cables on our website. Malek Khadhraoui would be responsible for the formatting, tagging, and categorizing of the cables. Sofiane Guerfali and I were responsible for choosing a hard-to-censor platform that would host the cables. We would also design the logo and look and feel of Tunileaks, and finally, plan the dissemination strategy. The deadline for publishing Tunileaks was November 28th, 30 minutes after Wikileaks’ Cablegate release. It was a full month of work and dreams, playing with the secret files of a corrupted regime, and possibly with its destiny.

In the mean time, I contacted friends from the Lebanese Al-Akhbar Newspaper and handed over the Arab countries’ files. I asked them if they could publish the cables. My Lebanese friend called me two days later and said “This might kill us here, but we’re in it. We will publish stories around the cables on both the print and the online version of Al-Akhbar.” I did the same with an Egyptian newspaper where some of my friends worked, some as editors, and some as journalists and web developers. They did what they could, but their management was scared and refused to write stories about the cables. I also sent other folders to activists I knew in another Arab county, who worked on them, eventually publishing them on their website.

I came to realize later that the trove of files I’d received was a “leak within a leak.” As some people weren’t satisfied with Wikileaks’ media strategy on partnering only with Western news organizations (The New York Times, The Guardian, Der Spiegel, Le Monde and El Pais), they wanted to include media organizations and citizen media initiatives from the developing world in publishing the Cablegate files. I’m still not sure if the success of this “leak within the leak” had played a role in convincing Wikileaks to change its media strategy. But starting with Stratfor email leak, we noticed how Wikileaks partnered with more than twenty-five media outlets from all over the world to release The Global Intelligence Files, and nawaat.org was one of these new official partners.

At Nawaat, we ended up publishing on Google Appspot. We’d coordinated with some Chinese activists in the past to run a Chinese blogging platform on top of Appspot and been happy with it. It was all that we needed: a minimal CMS with a secured connection that shared tens of Google IP addresses. We already knew that the Tunisian censorship police would block the domain name tunileaks.appspot.com, but in order to block an https URL they needed to block the first Google IP, then the 2nd, then the 3rd, etcetera. After each IP address was banned, we asked our tens of thousands of followers on Twitter and Facebook to change the IP address in the host file on their computer, without the need to use complicated circumvention tools. By this time, all Nawaat social media accounts were blocked in Tunisia: Youtube, Twitter, Facebook, Posterous, Vimeo. But this was a funny cat and mouse game that we’d mastered during the last ten years of censorship and anti-censorship efforts, and we knew it well. At the end, Tunisia blocked the entire Google Appspot and AppEngine IPs, affecting other Google services. In Tunisia this provoked an angry response from average Internet users and businesses with no particular politics. It was Ethan Zuckerman’s Cute Cats Theory at its best!

The government censorship came too late. We managed to disseminate the cables as a PDF on Scribd and tens of other file-sharing services, on torrents, and it even ended up on Facebook as images, spread further by “slacktivist” likes and shares. Tunisian activists crowdsourced the translation of the most sensitive and scandalous cables into French and Arabic. The translations were disseminated by hundreds of guerrilla networked activists and non-activists, both online and offline. The cross-posting mechanism of the social web coupled with the hand-to-hand distribution via CD, USB sticks and printed documents was so quick, so horizontal and so distributed that it was impossible to censor. It was the perfect unblockable infrastructure, better than any VPN or Tor.

We already understood that in the era of social media, blocking websites doesn’t block the information, a lesson that the Ben Ali regime and the like never understood. The regime panicked. By early December the information that the dictatorship had worked so hard to block and control was everywhere, snowballing. From business managers to vegetable sellers, everyone had heard of Tunileaks. The rich and complex propaganda machine of Ben Ali couldn’t do much to restore its tarnished image. It was collapsing. It was only a matter of days.

And days should be calculated for the sake of history. Twenty days passed between the release of the Tunileaks cables, on November 28th 2010, and the start of the Arab Spring, on December 17th, 2010. That was the day a poor street vendor named Mohamed Bouazizi set himself on fire. In a chat with a British journalist this year, Ben Ali’s propaganda minister Oussama Romdhani confessed that “Tunileaks was The coup de grâce, the thing that broke the Ben Ali system.” It wasn’t the information about corruption and cronyism, Tunisians didn’t need Tunileaks to tell them their country was corrupt. Tunisians had been gossiping and joking about the corruption for years. What was different was the psychological effect of an establishment confronted so publicly with its ugly own image. It was that the government knew that all people knew, inside and outside the country, how corrupt and authoritarian it was. And the one telling the story wasn’t a dissident or a political conspirator. It was the U.S. State department, a supposed ally. 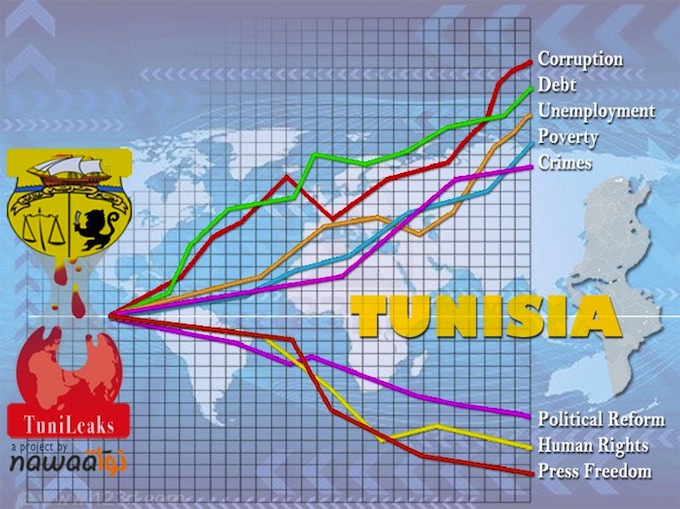 A week before the start of the Arab Spring, the Lebanese Al-Akhbar website was hacked by a group supporting the Saudi regime as retaliation for the stories they ran about the cables. As the revolutionary spirit spread, so did a cyber war of propaganda, DDoS attacks, hacking, threats and arrests of activists across the Middle East. The target of that war was the information in the cables and the carriers of that information, people and infrastructure. But despite the efforts to shut the information down, dictatorships started to fall, one after the other.

But it had to start somewhere, and the release of the cables started with Private Chelsea Manning, alone in the Iraqi desert. She, like Assange and Snowden and many less famous and mostly anonymous activists, are the deities of a new mythology that no prison can ever detain. The battle for a transparent and accountable world is spreading, despite all the measures of repression and surveillance. It’s being carried by a worldwide movement exposing secrecy, corruption and human rights abuses, for which Chelsea Manning will be an inspirational and iconic figure, as free as her ideas and dreams while her body is behind walls and bars. After she was sentenced to 35 years in prison Chelsea Manning said in her statement that “Sometimes you have to pay a heavy price to live in a free society.” I don’t know if she knows that she helped us, in this part of the world, to move toward that noble goal. Closing a cell door on a prisoner with a free mind has opened a thousand and one doors for a free society.