On Monday, February 9th, the missile frigate USS Elrod docked at La Goulette, the port of Tunisia’s capital. Upon completion of its day-long mission on February 10th, the US Navy released a report describing the day’s activities, including a PASSEX (passing exercise) in which the US and Tunisian navies exchanged technical information and practices on damage control, medical care, and boarding procedures to deal with smuggling. According to damage control assistant Lt. j.g. Michael Simmons, “Our goal here was to strengthen our partnership with Tunisia in hopes of increasing maritime and theater security in the region.” 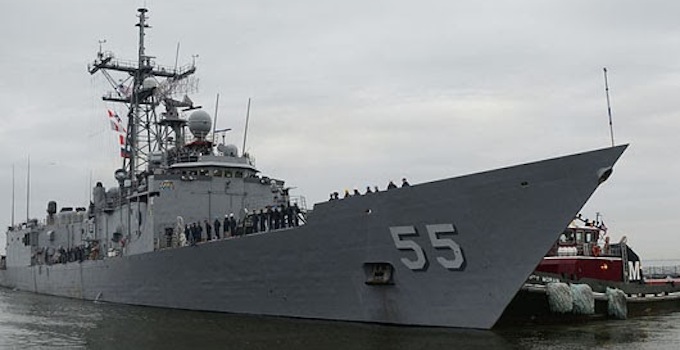 For its part, the US Embassy in Tunisia explains on its website that the purpose of the vessel’s tour of North and Western Africa is to strengthen global maritime partnerships, and features a link to the Embassy Facebook page where a video of the event is posted. A string of responses written in English and Arabic reveal a spectrum of reactions ranging from “God Bless America“, to “We’re all pretty aware of Africom and all the American scenarios targeting our countries with your models of “democracy” and “change.” Please leave our country.”

The latter comment and several others like it capture a common sense of uncertainty and wariness about US interest in Tunisia since the beginning of the revolution. Indeed, the US has expressed its interest overtly and enthusiastically; between the USS Elrod’s stop in Tunis and President Obama’s phone call on February 3 to Mehdi Jomâa inviting him to Washington “to continue to build the US-Tunisian relationship“, America appears eager to to be involved. The White House press release on Obama and Jomâa’s exchange concludes that “The United States will continue to be a friend and partner to Tunisia to support its democratic transition, to bolster security, and to promote a more peaceful and prosperous future.”

Exploring US military intelligence and research institution reports available online allows one to move beyond easy, appealing, polished diplomatic discourse and into what is rather extensive and in-depth research conducted and funded by the United States about Tunisia. But even with the abundance of tables and graphs and information, it is impossible to ignore what history or intuition or plain writing reveal about the nature of US intervention in politics, economics, and security abroad…that it so often falls into the category of what Joseph Nye calls soft power. Transition at a Crossroads: Tunisia Three Years After the Revolution published by the Committee of Foreign Affairs, exhibits a fair number of examples of persuasion or pursuit of personal objectives through co-opting (as opposed to coercion or bribery):

I want to thank NDI, IRI, and the International Foundation for Electoral Systems for your contributions in Tunisia, not only doing key work in strengthening political parties, civil society, and providing election support, but in many ways it is your organizations that are representing the American ideals of equal opportunity and dignity for all…

A curious pattern throughout US documentation of events in Tunisia over the past three years is the pairing of economic and security issue reforms and the association of these two sectors as essential to successful democratic transition in Tunisia. The Congressional Research Service, a Library of Congress legislative branch agency, and the Defense Technical Information Center (DTIC) within the US Department of Defense, offer an abundance of reports and analysis on Tunisia since the beginning of the revolution. In May 2013, Analyst in African Affairs Alexis Arieff published a report on the Political Transition in Tunisia in which he writes:

Administration officials have stated strong support for Tunisia’s transition, as well as a desire to advance bilateral economic ties and deepen security cooperation, [and] U.S. priorities in Tunisia include encouraging steps toward full democracy and political stability, advancing trade and investment ties, and working with the Tunisian government to address terrorism and regional insecurity.

Equally noticeable are consistent references to what is apparently the ever-rising trend and threat of terrorism. Arieff points to “growing indications that jihadist groups are active on Tunisian soil, and specifically that Ansar al Sharia [officially designated on January 10 by the US State Department an international terrorist organization] appears increasingly willing to threaten the state with violence.” In fact, the heightened sense of terrorist activities and political violence in Tunisia seems particularly to have piqued US interest in recent years, as discussed in another CRS report on US Trade and Investment in the Middle East and North Africa: “U.S. interest in deepening economic ties with certain countries in the Middle East and North Africa (MENA) has increased in light of the political unrest and transitions that have swept the region since early 2011.”

The IMF Stand-by Arrangement : US Economic Intervention in Tunisia

While US military intelligence and research centers offer extensive analysis on security issues and reform, the IMF—headquartered in Washington and heavily influenced by the US Treasury Department—has come up with the Stand-by Arrangement for Tunisia. On January 29, after a delay that the IMF attributed to the country’s lack of progress on anticipated economic reforms, the organization released the second installment of a $1.78 billion loan. Yesterday, the IMF released a ninety-two page document including a staff report that describes economic developments in Tunisia and projected Stand-by Arrangement policies. A chapter on Macroeconomic Context and Outlook explains that “the lengthy consultation process to complete the political transition—and the unprecedented upsurge of insecurity— have shaken confidence in the Tunisian economy. This has led to a slowdown in economic growth, a delay in the implementation of planned reforms, and persistence of the wait-and-see attitude of local and foreign investors.”

The IMF’s economic policies and programs face widespread scrutiny and are commonly perceived to create relations of dependency between the organization and loan recipients. As the US has begun to collaborate with Tunisia on security reform, the IMF is moving ahead with its economic rescue plan. In a 2013 Nawaat interview with Mark Weisbrot of the Center for Economic and Policy Research (CEPR), Weisbrot explains that, even more than the military and CIA, the IMF has been the most effective avenue of US influence in developing countries. He predicts that the Stand-by Arrangement in Tunisia will ultimately have generally detrimental effects, that the country may actually be sacrificing its economy to reduce debt and, like Europe, could wind up in a long recession. He points to Argentina as a model for an alternative economic path. The South American country, unable to borrow from international markets after defaulting on its debt just over a decade ago, has pulled out of economic crisis even without access to international capital. Weisbrot believes that countries can and should look for alternatives to IMF programs, that there are always other sources of reserves, that in Tunisia’s case the government can implement economic reforms independent of foreign assistance in order to move towards stability.

The show of US interest in Tunisia since the beginning of the revolution is significant, both in mainstream media and discourse as well as in US official investigations and reports. Whether docked at the capital port, or congratulating the prime minister, or releasing large sums of loan money into the economy, or advocating for a successful democratic transition, the United States has made it clear that it has a vision for Tunisia. Certainly within the helping hand that the US has extended towards Tunisia are veins of authenticity and goodwill, just as surely as there are of hidden agendas and ulterior motives. At the end of the day, we can only hope that Tunisians will be the ones to decide how to respond to offers of foreign aid and assistance, the ones to define the role the US will play in the country moving forward from the revolution.