The National Constituent Assembly’s first plenary session was overshadowed by a nationwide press strike in protest of the recent crackdown on Tunisian journalists and media personalities. Despite the resumption of political activity, the investigation of Mohamad Brahmi’s assassination remained at the forefront of Tunisian politics and was the focal point of Thursday’s meeting. In addition, both the opposition and ruling coalitions have reviewed UGTT’s latest proposal for a renewed dialogue. 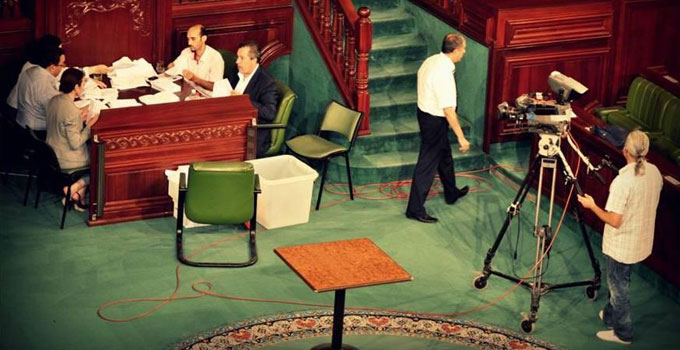 The National Constituent Assembly is Back in Session- And a Breakthrough in Negotiations?

On September 17, the National Constituent Assembly (NCA) held its first plenary session in over one month following the Brahmi assassination. Fifty-nine members were not in attendance and the coverage of the inaugural session was overshadowed by the nationwide press strike.

That same day, UGTT finalized its latest plan to restart a national dialogue, after failed negotiations in early September. The UGTT said that under the terms of the latest proposal, entitled the ‘Quartet Initiative,’ the government would resign three weeks after negotiations commenced and after the setting the date of the next election. A technocratic government would be installed, with the support of the National Constituent Assembly. A statement by the Ennahdha Party on its Facebook page stated that,” [it] values the resumption of dialogue…we are studying the proposed initiative.” On September 19, the secretary general of the Congress for Republic (CPR), Imed Daimi, said that the “Troika had responded positively to the quartet initiative, ” following a meeting with UGTT Secretary General Houcine Abassi. Mongi Ellouze, the head of the Al Joumhouri party said that members of the National Salvation Front met to discuss the terms of the Quartet Initiative proposed by UGTT, and met again on Friday for further discussion.
On Thursday, Ennahdha released a statement on its Facebook page signed by the heads of the Congress for the Republic, Ennahdha, and Ettakattol parties. The document stated that they “stressed their commitment to ensuring the success of the dialogue through the acceleration of the completion of the transition phase, reaching consensus on the alternative government, and holding free and fair elections at the earliest possible time.” UGTT announced that it would release the results of the negotiations by Saturday.

The assassination of Mohamad Brahmi, which led to more than a month-long political deadlock in the National Constituent Assembly, has once again become the focus of government investigation. On September 14, the newspaper Al Maghreb printed a document delivered to the Interior Ministry dated July 15 that discussed intelligence received from the Central Intelligence. The security tip concerned a potential threat to Mohamad Brahmi. According to TAP, Interior Minister Lotfi Ben Jeddou said that a document “sent by foreign intelligence services” was received prior to the assassination, but that he was not notified. Following the assassination, the government began an investigation into the assassination.

Civil society groups and some NCA members, however, are claiming a larger government conspiracy in the days leading up to the assassination. In an interview with Mosaique FM, NCA member Mahmoud Baroudi alleged a second document that showed a threat against Mohamad Brahimi. Furthermore, Taieb Aguilli, the president of the ‘Search for Truth on Assassination of Chokri Belaid Initiative,’ said on radio that Prime Minister Ali Laarayedh blatantly ignored the threat and destroyed the document following the assassination.

On September 17, opposition groups organized a group of deputies to call for the resignation of Prime Minister Ali Laarayedh “for justice for the Brahimi and Belaid assassinations.” That same day, Rached Ghannouchi, the head of the Ennahdha party, issued a statement on his Facebook page stating that he has called on Ennahdha to lead an “inquiry into the dangerous security failure so as to identify those responsible and undertake required measures to preserve the credibility of security services.”

These security concerns were addressed in Thursday’s plenary session, attended by 124 NCA members, as well as Interior Minister Ben Jeddou and Minister of Justice Ben Ammou. NCA members made their remarks and offered questions, and in the afternoon, both ministers responded to their concerns.

In response to the now-public documents, Interior Minister Ben Jeddou said that the information surrounding the threat toward Mohamad Brahmi was “treated according to the usual procedures.” He explained that his office does not have direct contact with foreign intelligence bureaus and that he only receives threats “depending on the degree of importance and gravity” of the situation. According to Mosaique FM, he said that some members do have connections to some political parties, but that there was absolutely no conspiracy to hide the documents that contained tips surrounding an assassination attempt directed toward Brahmi. While there are still significant issues to contend with and that he “failed” in properly dealing with the threat, he reiterated that Tunisia has made substantial progress in the security sector.

The National Union of Tunisian Journalists called for the continued push of the media sector ensure their right to free expression and the implementation of Decree 115, which would protect journalists from harassment and get rid of prison sentences for charges against journalists. During Thursday’s plenary session, Minister of Justice Ben Ammou stressed that the Ministry of Justice did not intervene in Zied el-Heni’s case and that his office has no control over Tunisian judges.

Zied el-Heni was released from jail on Monday after posting bail, while on September 20 Taher Ben Hassine appeared before a judge in Tunis to address the charges of inciting civil disobedience. Nassradine Shili and Mourad Mehrezi still remain in prison.