Mohamed Brahmi, a deputy who resigned from the “Echaab” party to found “Attayar Echaabi” was assassinated today morning while he was leaving his home. The deputy, from Sidi Bouzid, was shot dead by 5 14 bullets.

Jump to other dates below to read related events. This article is being updated live! Refresh!
The Sit-in Day Sunday, 28th of July events

Monday 29th 6:30am – National Assembly Bardo – Tunis: Instructions were given to the military to support police forces to disperse the sit-inners and MPs. The action was accompanied by violence and aggression. MP Noomane Fihri, one of those who announced the withdrawal from Constituent Assembly, was severely aggressed by security forces and was transferred to hospital.

Sunday 28th 10:19pm – Zarzis: An anti-government marched in the streets of the southern city of Zarzis.

Sunday 28th 9:40pm – National Assembly Bardo – Tunis: Pro-government supporters arrived to swell the ranks of those opposing the protest sit-Pro-government then they prayed in the site. The police asked the sit-inners to avoid any provocation.

Sunday 28th 6:40pm – National Assembly Bardo – Tunis: About 300 protesters still present in the sit-in in front of of the National Assembly in Bardo. Bessma Khalfaoui’s widow of the assassinated Chokri Belaid called for a Collective Iftar dinner today at the sit-in.

Sunday 28th 5:10pm – Tunis: The Minister of Education, Salem Labyedh said he had informed Prime minister Ali Larayedh of his decision to resign.

Sunday 28th 4pm – Siliana: The coordination of the Salvation Front (Le Front du Salut) has set up tents for a sit-in at Errach Square in front of government building.

Sunday 28th – Tunis: Hamma Hammami, Popular Front Spokesman said today that the ruling Troika which is responsible for the current crisis cannot be part of the national salvation government.

The Troika cannot be both a source of the problem and part of the solution.
Hamma Hammami

Sunday 28th 2pm – National Assembly Bardo – Tunis: A call to a Collective Iftar dinner today at the sit-in in front of the Assembly has been issued by the sit-in committee.

Sunday 28th 2:30am – SidiBouzid: Calm returns to the city, police retreated after a confrontation that took place earlier in the evening around 10pm with young people who were protesting against the arrests of their fellow protesters.

Sunday 28th 2:00am – Sfax: Calm has been restored on site of the sit-in in front of the town hall. Earlier in the evening, around 10pm, a demonstration marched towards the local government building. On 11pm some thugs who infiltrated the protest threw stones causing injuries to a soldier and a policeman. Around 23:30 police used tear gas to disperse the crowd.

Sunday 28th 1:10am – Sousse The protest march, which started earlier in the evening, was dispersed by the police.

Saturday July 27th, 2013 9:15pm National Assembly Bardo – Tunis The number of sit-inners in front of the Assembly is increasing, 1000 people at the sit-in in front according to a security source.

Saturday July 27th, 2013 9pm National Assembly Bardo – Tunis After discussion with the police, three tents were finally set up in front of the Assembly.

Saturday July 27th, 2013 4:20pm National Assembly Bardo – Tunis Police forces chased the protesters and set-inners in the streets adjacent to the Assembly buildings, beating protesters with batons causing a lot of panic. Protesters trying to escape. Excessive use of teargas and unwarranted violence by the police.

Saturday July 27th, 2013 4:05pm National Assembly Bardo – Tunis:
Excessive use of violence and teargas in front of the Constituent Assembly. Many protester fainted from tear gas.

Saturday July 27th, 2013 2:55pm National Assembly Bardo – Tunis: The clashes took place mainly in the street in front of the entrance gate of the Assembly building. One of the protesters said they had been injured by members of the League for the Protection of the Revolution (LPR).

Saturday July 27th, 2013 2:48pm National Assembly Bardo – Tunis: sit-inners in front of Constituent Assembly ask the police to stop the disproportionate use of teargas. They are chanting: “peaceful…peaceful!”

Saturday July 27th, 2013 2pm National Assembly Bardo – Tunis:Police continues to use tear gas in front of Constituent Assembly. The crowd is outraged. Many people with breathing problems caused by inhaling the tear gas.

Saturday July 27th, 2013 12:40pm Jellaz Cemetery – Tunis: Mohamed Brahmi’s widow: “Stop clapping. You applauded when Belaïd died, and it didn’t help. Head instead to the government and send these rats back to the sewers.”

Saturday July 27th, 2013 12:10pm Jellaz Cemetery – Tunis: Layer and activist Nacer Laouini present gave a speech at the El-Jellaz cemetery during which he said: “We will protest peacefully after the funeral to dissolve the Constituent Assembly (…) The head of the army is present here, and we ask the army to remain as it has always been: with the people.”

Saturday July 27th, 2013 11:25am Jellaz Cemetery – Tunis: The funeral procession arrives at the cemetery where people were waiting.

10:50am Turkey Street, Tunis: Residents attached a banner to their balcony with an extract from Moudhafar Naweb poem (Iraqi poet) reading: “These are the times to piss over the desks, ministers and parliaments. I piss on them shamelessly for they shamelessly fought us”

Saturday July 27th, 2013 10:30am – Av Mohamed V – Tunis : After a pause in front of the former headquarters of the RCD ruling party, the funeral procession resumed its march towards Jellaz cemetery. Avenue Habib Bourguiba, the police are present. An army helicopter following the funeral procession.

The Day After Friday, 26th of July events

Friday 26.07.13 11:45pm – Tunis: The 42 MPs who froze their activities at the Constituent Assembly announced during the Press Conference held today that they will join the protest sit-in tomorrow in front of the Assembly.Friday 26.07.13 11:30pm – Gafsa: Death of activist Mohamed Mofti (a Telecom Engineer and father of two kids) in front of local government building in the city of Gafsa. He was struck in the head by a tear gas canister fired by police.

Friday 26.07.13 11:12pm – Tunis: Press conference of the 42 MPs announcing their withdrawal from the Constituent Assembly.

Friday 26.07.13 6:52pm – Tunis: According to MP Karima Souid, 42 MPs will announce their withdrawal from the Constituent Assembly during a press conference scheduled at Hotel Africa at 10pm. These MPs, including some independents, are representatives of AlMassar, Al Jouhmouri, Afek, Nidaa Tounes, Front Populaire, Poct, Moubadra,

Friday 26.07.13 5:30pm – National Assembly Bardo : Video coverage of the sit-in in front of the Constituent Assembly.

Friday 26.07.13 1:10pm Home of Mohamed Brahmi, El Ghazella : Hama Hammami accuses the Troika governement and Ennahdha of being accomplices in the assassinations of the two martyrs : Chokri Belaïd and Mohamed Brahmi and calls for civil disobedience. He requests the setup of a national unity governement and hight commission to replace the national assembly.

Friday 26.07.13 00:20pm Ministry of interior : Minister of interior declared in a press conference that the weapons used to assassinate Mohamed Brahmi are the same used with Chokri Belaid.

we are going for the peaceful disobedience.

1am: Friday July 26th, 2013: Said Ayadi from Joumhouri party wrote on his Facebook wall that more than 100 members announced their resignation from the party in protest of its policies and position.

12am – Bizerte: (below) hundreds of protesters marching in Bizerte city outside the local government building.

12am – Gafsa: Violent clashes between protesters and security forces in front of the local party office of Ennahdha in downtown Gafsa.
Earlier in the evening, hundreds of protesters gathered outside the local government building shouting slogans calling for the “overthrow the government”. The army, on duty outside the building, had to shoot live ammunition to deter the protesters from approaching the building. The police repeatedly fired teargas to disperse them. Clashes continue in the same time near the supermarket “Carrefour” in the city center. Protesters blocked several access to the city center with burning tires.

11:25pm – Sousse : big demo in the city of Sousse calling for the fall of the regime.

11:20pm – Sidibouzid : violent clashes between police and protesters in front of the torched headquarter of the government. Massive security presence.

10:14pm – Av. Habib Bourguiba – Tunis : Excessive and disproportionate use of tear-gas against protestors and others in Bourguiba Ave and adjacent streets.

9:30pm – Tunisair Press Release: The airline says it suspend all its flights tomorrow, July 26th. “Following the advice of a general strike in Tunisia: Tunisair Tunisair Express inform their guests that all scheduled flights to and from Tunisia in the day of July 26th are canceled.”

8:57pm – Tunis: Youth activists of the Popular Front has called for an open sit-in in front of the Constituent Assembly starting at 9pm tonight.

6:55pm – Av. Habib Bourguiba : Most of the protestors already left the street to break their fasting.

6pm – Sfax : The collective of political parties and NGOs has met in the Watad HQ to call for :

– all citizens for civil disobedience,
– the members of the national assembly to resign,
– the dissolution of the national assembly and all instances derived from it (the gouvernement and the presidency),
– the formation of a national salute and unity government,
– the dissolution of all religious-based political parties for their involvement in the assassinations and the dissolution of all militias and violent groups (LPR…),
– the security and military institutions to stay politically neutral,
– all citizens of Sfax to join an open Sit in to be held in front of the City Hall.

5:25pm – Ariana : Police est intervened to separate two guys fighting in front of the ambulance. Police took profit from the situation to force the ambulance to “Route X”, heading it to Charles Nicolle hospital.

5:15pm – Ariana : The procession is heading to the entry of Ariana, blocked by the police to avoid it getting the Bourguiba avenue.

4:15pm – Front Populaire HQ : Publishing of a press release. During the conference Hamma Hammami, the spokesman of the party called to :

– civil disobedience,
– the fall of the government,
– the dissolution of the national assembly,
– the creation of a national salute and union movement,
– general strike during the funerals day (July the 26th). 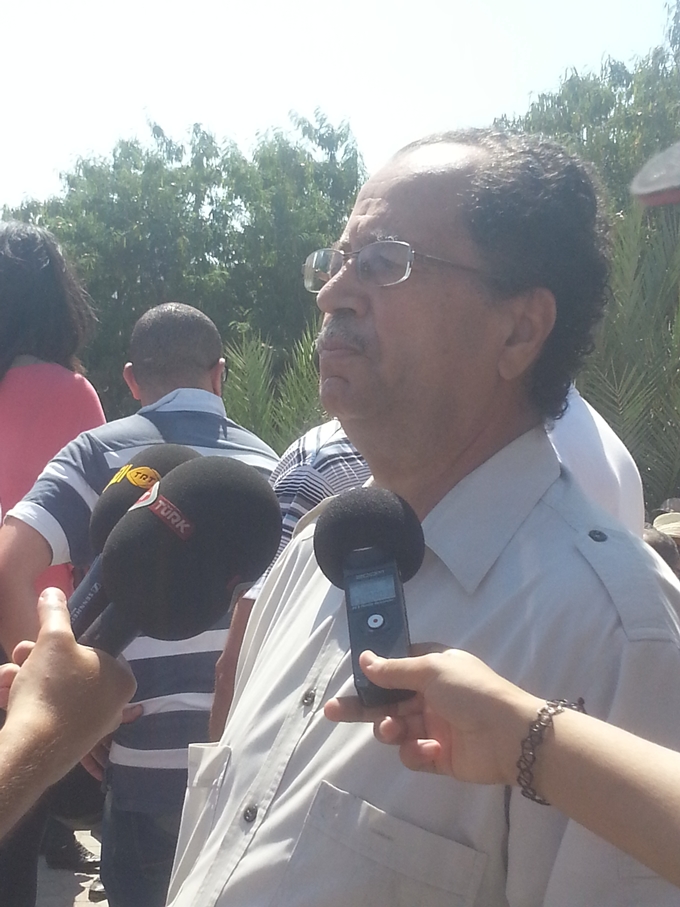 3:10pm – Sidi Bouzid, Mohamed Bouazizi Avenue : A gathering in front of the city hall. Few clashes between security forces and protestors. Most of the protestors are from Al Jabha and Attayar Achaabi.

2:45pm – Av. Habib Bourguiba : A march started in Place Med Ali (HQ of the Labor Union) gets to the main Tunis Avenue. Few hundreds are protesting and the march is getting larger.

It’s a murder against the Tunisian state and the democracy. They seek to push Tunisians to exchange accusations. (…) Those who committed this murder are enemies of democracy. The Tunisian revolution was peaceful, they want to turn it bloody while the national assembly is almost done with the writing of constitution and the setup of the institutions that will lead the country to the next free elections (…) We request a national anti-violence coalition.Rached Ghanouchi

2:40pm : Home of Mohamed Brahmi : neighbors are claiming they heard five gunshots and not 11, around 12h10. One of the daughters of Mohamed Brahmi declares to radio Kalima seeing the two aggressors on a Motorcycle.

2:15pm : Communique of the spokesman of the Presidency of the republic : We condemn the assassination of deputy Mohamed Brahmi, ” a crime committed on the Anniversary of the Republic Day” while the national assembly is working on the finishing of the transitional phase, explains the communique.

The communique calls on the Tunisians not to fall into the trap of violence.

2pm – “Mahmoud Matri” Hospital : Many spontaneous calls to a gathering in front of the national assembly.

A meeting of the “Democratic coalition” is planned to be held at 3pm at the “Front Populaire” HQ.

1pm – Today – Mohamed Brahmi deputy from Echaab ( quited since July ) and founder of Parti Courant Populaire ( Attayar Achaabi ) assassinated this morning when leaving his home in the Al Ghazela area of Ariana (near Tunis).