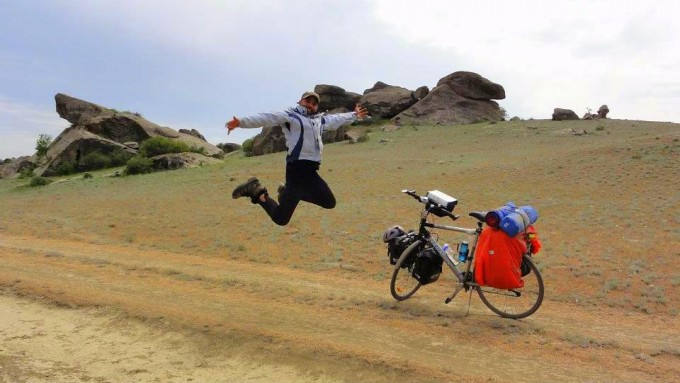 Devotee of nature, adventure enthusiast, and young environmental engineer is Arafat Ben Marzou. Arafat is a young dreamer who for the pursuit of happiness artfully rebels against social pressure, capitalism and imperial powers. Arafat’s childhood dreams of travel and adventure came true when he crossed the African Sahara in 2011 from Tunisia to Senegal using the most modest means of transportation: walking, taking the bus, hitch-hiking and sometimes riding a camel.

His love for life and discovery put Arafat in 2012 back on the road this time riding his bike from Tunis to Beijing. From Tunisia through Turkey, Georgia, Azerbaijan, Iran, Afghanistan, Uzbekistan, Kazakhstan until the very east of China, a bike, a small tent, a sleeping bag and the Tunisian flag were among the few possessions of Arafat. Despite careful planning, it is the road that ensorcelled and directed Arafat. Neither the bone-chilling winter in the mountains of Turkey nor the bomb attacks in Afghanistan nor the forceful windstorms in the desert of Gobi in China frightened Arafat from globetrotting.  A tight budget did also not disconcert this brave Tunisian very much, because he biked across many guardian angels, trip companions and friends for life.

Already mastering the basics, Arafat relied on the road to put him on a better physical shape. Prevailing over fear, loneliness and unexpected obstacles are not the only things that the road taught Arafat. Arafat’s philosophy for life adopted new perspectives, particularly tolerance to the human kind, doctrine and universality.

Arafat dreams of making the world a better place, and so he used every occasion during his trip to engage in conversations about Tunisia and raise environmental awareness.

After 10 months, 9500 kilometers, nine countries, eight visas, one bike, 20 flat tires, and six threadbare tire profiles, Arafat is back in Tunis all smiles and full of energy for his next escapade. According to Arafat, globetrotting is a dream come true for him and for every fellow Tunisian.