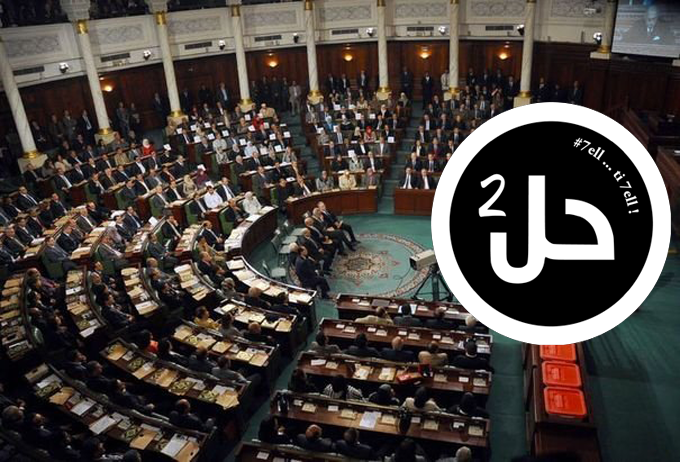 On June 4th, members of the OpenGovTN group (an initiative that works to institutionalize transparency in the new Tunisia) met with the information and communication official in the Constituent Assembly, representative Karima Souid. As part of a series of recent meetings in the past few months, the meeting was held to review the assembly’s progress in implementing values of transparency and accountability in all its works.

The meeting prior was held with assembly president Mustafa Ben Jaafer at the onset of the group’s latest campaign, #7ell2 [Open2], on May 14. Ben Jaafer promised the OpenGov activists that by the next scheduled meeting (with Karima Souid), the assembly will have started implementing the group’s two demands: 1. Traceability of all votes held in the assembly, 2. The publication of all committee meeting minutes and summary reports on the assembly’s official website, www.anc.tn.

Souid informed the OpenGovTN group that starting on June 11th, all committee meeting minutes and reports will be published on the website. Plenary roll call lists, clearly indicating which representatives were present and absent, will be published online. The list of absentees will indicate excused and unexcused absences. Finally, Souid told the OpenGov group that an e-vote system that allows for traceability will be implemented as soon as the assembly successfully receives a grant from the UNDP.

The publication of the above mentioned documents will start on the 11th, as Souid has promised – however, this does not include retroactive uploads of committee minutes and plenary roll calls. Souid indicated that the administration will begin catching up “eventually.”

By relative measure, the steps taken by the assembly’s administration are considered strong, positive steps in the right direction, by the majority of OpenGov members and activists.

However, the work is far from over. While the administration will be publishing the roll call lists, for example, they will all be published as scanned PDFs. This format does not allow for the easy download and transfer of information in bulk – especially if the data is to be used for long-term projects that necessitate a wider view of, for instance, all roll call records dating back to the Constituent Assembly’s first general plenary held on November 22, 2011. A more apt and convenient format would be a downloadable Excel that chronicles all roll calls – from the beginning of the assembly’s mandate until its end.

The success of OpenGov is inherently dependent on OpenData mechanisms – the furnishing of public information in easy to access, read, and use formats. What is absolutely incumbent on the Constituent Assembly today is the establishment of a special office within the its administration that safeguards the citizen’s sacred right to information. An office that works exclusively on the assimilation of information and its proper presentation and upload.

It must be remembered that one of the biggest failures of the former regime is the perception of the government’s impunity: the lack of accountability in governance was a crucial factor that allowed the Ben Ali system to rob the people it was supposedly governing in such a seamlessly unaccountable way. The right to information safeguards the citizen’s ability to hold public institutions and elected officials responsible for their actions.

Thus, the institutionalization of the measures that representative Souid has promised the OpenGov group and the Tunisian people is critical component to ensure their continuity, and even the replication of similar measures all across the country. The Constituent Assembly is in a position to lead the country as a model – and as the only elected body in the country, there couldn’t be a better fit.