Tunisia: “The Illusion of Islam” unveils the illusion of liberty

“This affair has nothing to do with freedom of expression, or with freedom at all.” That’s how the lawyer Foued Cheikh Zouali describes the case of the Atheists in Mahdia. But given the evidence of our investigation and complete transcription of the file on the two accused, the opposite is true. (This investigation was undertaken in collaboration with Olfa Riahi – see her article at this link)

What’s on trial here: Atheism or for breach of public order?

The affair began on March 3rd 2012, in the coastal town of Mahdia, when two citizens filed a complaint against two young men, Ghazi Al Beji and Jabeur Mejri, accusing them of “breach of public order”, “moral transgression” and “third party injury” as cited in the judgment of the Court of First Instance in Mahdia, which was announced on March 28, 2012. The accused each received sentences of 7 and a half years of prison and 1200 dinar fines. 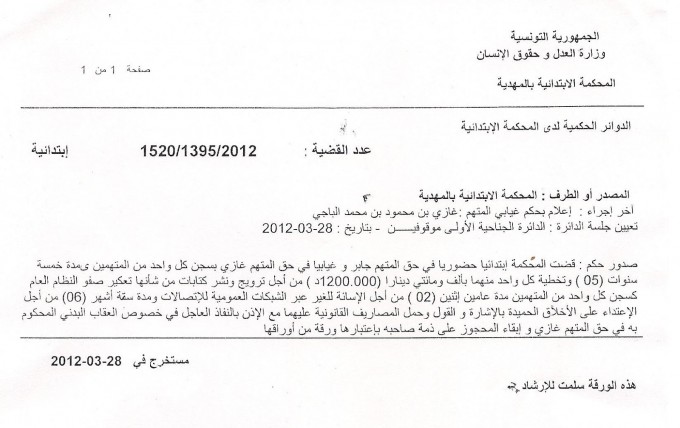 The two young men, both well known as atheists in Mahdia, published several works criticizing Islam. Ghazi Al Beji was known for his work “The Illusion of Islam”, a satirical novel describing part of the life of the Prophet Mohamed and his wife Aicha (accompanied by caricatures). As for Jabeur, he was known for several works that he published on his facebook page and other social networking sites.

The jewish and Christian Bible

Jabeur had to appear in court immediately. And given the refusal of local lawyers to defend the accused, Ghazi decided to flee the country. When contacted by telephone, Ghazi Al Beji did not deny his atheism, admitted that he had been in contact with Jabeur Mejri, who had read his novel “the Illusion of Islam” and that he regretted nothing, despite the death threats, the decision of first instance, and his current difficult situation. In fact, Ghazi risked his life trying to flee Tunsia, traveling through Libya, Algeria and finally, Turkey. He is currently in Greece, with neither passport nor money.

For a while, no one seemed to have heard of the case, even though the local radio “Shams FM” discussed it and some blogs discussed the issues relating to liberty of expression.

The League of Tunisian Humanists, Reporters without Borders and some independent militants have been the only ones who have bothered to discuss the affair.

What is considered a breach of public order in this revolutionary era? That’s he question Mahmoud Beji, Ghazi’s father, was asking, when we visited his house.

“My son is an unemployed university graduate, who hasn’t hurt anyone. Is he really more dangerous than those who committed murder during the revolution? Is he more dangerous than the Trabelsi clan, Ben Ali, or the snipers? If my son or Jabeur had a job, and was able to earn a living, they would never be caught up in this kind of thing. And anyway, they are free to believe what they want…what’s the problem if they aren’t believers?”

According to the lawyer Foued Cheikh Al Zouali, with whom we met in his office in Mahdia, the complaint was filed solely against Jabeur, who was summoned immediately. “The investigation was against Ghazi Al Beji, who admitted his atheism.” added the lawyer, who considers insulting the prophet to be more serious than murder. “I hope that the new constitution will institute a serious penalty for this kind of crime in order to protect religion and the feelings of Tunisian Muslims” he explained.

So what about freedom of expression and belief? “Everyone is free, but within the limits of respect” insists the lawyer, who sees no connection between this affair and freedom of expression. After a long discussion, he said the law had settled the matter. “What these two young men did is forbidden by the law,” he added and described the humiliation and psychological damage he suffered after viewing Jabeur Mejri and Ghazi Beji’s caricatures online.

Since they are vague and extremely fluid, the laws under which Jabeur and Ghazi were judged were used by Ben Ali against opposition figures and only against them. It was used so often that “breach of public order” came to mean “political prisoners.”

The articles concerned are 121-3 and 226 of the penal code and article 86 of the telecommunications code (see this link).

Many opposition members were persecuted using these statutes during Ben Ali’s reign, including Hamma Hamami, who was sentenced to 9 years and 3 months for breach of public order by the correctional tribune on July 14, 1999 (see the link).

Mohamed Abou, a lawyer and activist, spent three years in prison after publishing an article in 2007, describing torture methods employed by Ben Ali’s regime, which according to the law still on the books, was a breach of public order. Another case is that of the activist Ahmed Manai who spent half his life in forced exile after publishing the book “Tunisian torture – The Secret Garden of General Ben Ali ” (See this link)

The journalists Taoufik Ben Brik, Zouheir Makhlouf and Fahem Boukadous were also victims of these laws during the Ben Ali epoch.

Ghazi’s father, Mahmous Beji, told us that his son received death threats from Salafists. “The Sheikh even sent a message to my wife, telling her that Jabeur would not be able to escape the Salafists’ punishment in prison” he added. The father and his entire family now find themselves rejected by their neighbors. “I go to a masque in a neighborhood far away and I can’t spend time in the cafe anymore,” explains Mahmoud. “In court, they warned us not to contact any journalists or human rights groups and that if we did the public opinion against us might be violent.” Ghazi’s father told us that he has thought about selling his house and moving to another neighborhood.

Ghazi Beji also claimed, during our telephone conversation with him,that Jabeur Mejri had been tortured at the police station (this claim has not been verified). He explained that before the trial, some salafists attacked Jabeur in the street. “I am afraid to go home. Even if I won the trial, I would be in danger … they could kill me and no one would lift a finger to help me,” Ghazi added.

In order to obtain some more information about these thereats, we contacted Sheikh Wannasse, the imam of one of the largest mosques in Mahdia. According to him, he is not responsible for any of the threats against either Jabeur or Ghazi. “But we cannot blame Muslim who are offended if they react violently,” explained the Sheikh, who considers their “crime” unpardonable.

This very day. Human Rights Watch and Reporters without Borders made the journey to Mahdia to investigate the case. Both Tunisian and foreign media have started talking about the case in hopes of provoking public opinion on an issue that cuts to the core of of the freedom of expression that Tunisians have fought so hard to obtain.

Translated from french by Edith Mulhern