I heard the news two days ago. Two young Tunisians, both 28, from the Mahdia region, each received 7 and a half year prison sentences and 1200 dinar fines for having published a photo insulting the Prophet on Facebook.

At first, I thought it might be a hoax until I saw the story surface on two Tunisian news sites. Some more internet research led me to discover the testimony of one of the accused, Ghazi Béji. His account was on Atheistica, a blog run by Kacem El Gazzali, a Moroccan atheist who is active both on the net and in real life. In his account, Ghazi talks about his atheism, the daily trials he faces because of his convictions, and gives his side of the story about the photos. He also tells about a novel that he wrote in arabic, entitled “The Illusion of Islam” which has made its way around the net. He wrote the novel between March and July of 2011, when he was immobilized in bed after a knee operation. Ghazi was able to tell his story because he fled Tunisia before he was arrested.

In fact, on March 8th 2012, 3 days after his friend Jabeur Mejri, the second accused in the affair, was arrested, Ghazi found out that the former had named him – under torture, according to Ghazi – and a former Tunisian human rights activist advised him to leave the country because the affair was “very serious”. Ghazi therefore fled to Libya and spent the night there. Since the security situation with our neighbors was far from reassuring, he decided to return to Tunisia on March 9th. He learned that the police had been to his house (Ghazi lives with his parents) and then decided to flee to our western neighbors. He left for Algeria. One of his aunts sent him the money to buy a plane ticket to Turkey. Once there, he swan across the river Evros in order to reach Greece. This crossing almost cost him his life. (See: Grèce-Turquie: 16 migrants retrouvés noyés) Since then, he had stayed illegally in Greece. At first he stayed in a squat, and then rented with some illegal Algerians, using money sent by his aunt.

The story I just told is more detailed than what can be read on Kacem’s blog, because he helped me to get int touch with Ghazi in Greece. After our telephone conversation, and also after receiving a copy of the Certificate of Arrest, which I received from a friend in the League of Tunisian Humanists, I decided to go to Mahdia with my friend the journalist Henda Hendoud to investigate this affair.

We arrived in Mahdia on Wednesday April 4th. The first protagonist we met was the lawyer Foued Sheikh Zouali, one of two plaintiffs. This young lawyer, about 40 years old, received us amiably in his office a stone’s throw from the First Instance Tribunal of Mahdia. We introduced ourselves and explained why we had come. We asked if we could film the interview. He agreed.

Sheikh Zaouali, a thick file in his hand (we have a copy that he provided us), explained to us the reasons that pushed him to file a complaint against Jebeur Mejri. It is important to underscore the fact that at this point, Ghazi Béji was not part of the complaint.

Sheikh Zaouali met, on March 2nd 2012, in his office, an acquaintance (the second complainant, whose name I will not mention as we were not able to meet with him and obtain his authorization) who told him about the photos that Jabeur Mejri posted on Facebook, which offended the Prophet and Islam, and asked him what to do. Sheikh Zaouali, after taking a look at the photos on Jabeur’s profile, decided to call him and ask him to take down the images. Jabeur Mejri responded (according to the official testimony of the complaining attorney) that he would not do so, insulted Islam and the Prophet, called Muslims hypocrites, declared that he only recognized the Jewish religion and that he would demand asylum in Israel. The lawyer did not appreciate what Jabeur said and decided to file a complaint against him. The two plaintiffs failed the complaint the next day, March 3rd, calling for an investigation of Jabeur Mejri for insulting the Prophet in images and in writing, and causing Fitna (discord, division) between Muslims. 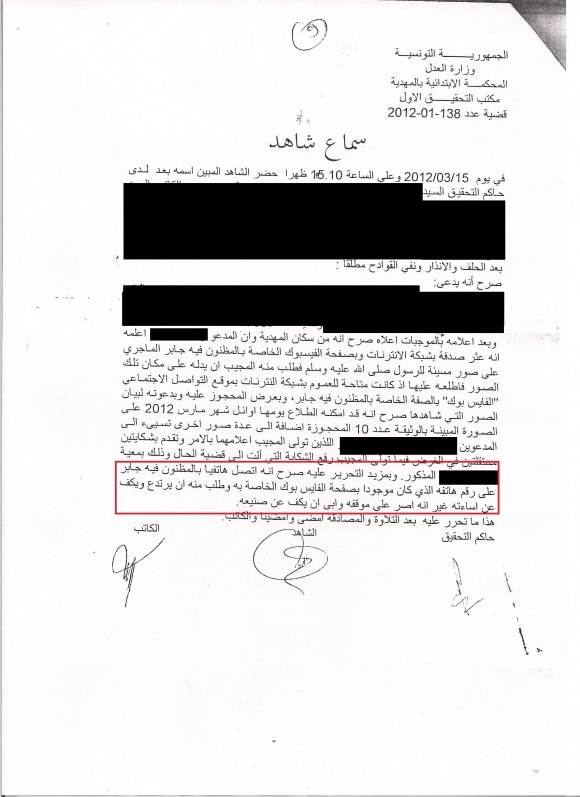 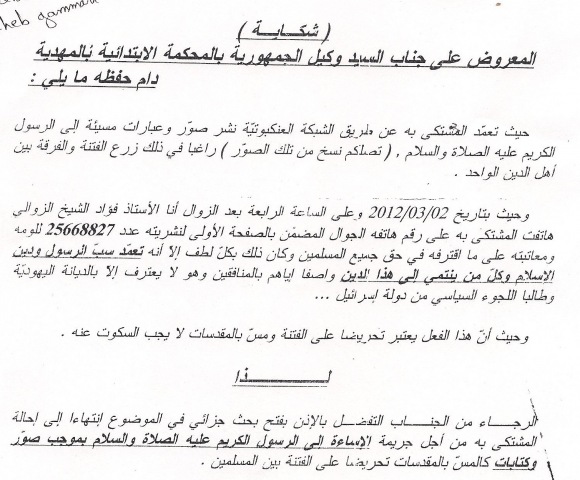 On March 5th, Jabeur was arrested and the second plaintiff testified. The latter declared that he knew Jabeur but that he had not personal problem or quarrel with him except the injury against the Muslim community (Umma) and that he filed the complaint as a Muslim who had suffered severe moral damages. 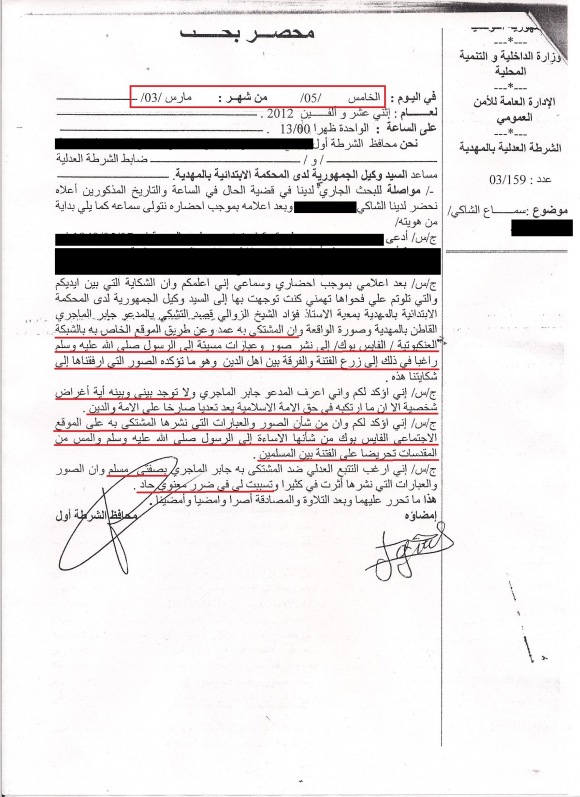 Jabeur testified for the first time on the same day (March 5th). He admitted to having published text and photos on his personal Facebook account and explained that what he published was motivated by his personal convictions and that he did not recognize the Muslim religion. He declared that he was an atheist and that in the past he had demanded political asylum in Israel and the United States. He insisted that what he published was only motivated by his personal convictions. He refused to apologize, insisting that he put them on his personal profile and that there was no reason for anyone to file a complaint against him. He declared that his does not suffer from any psychological problems and that he had never been treated for psychological ailment in the past. 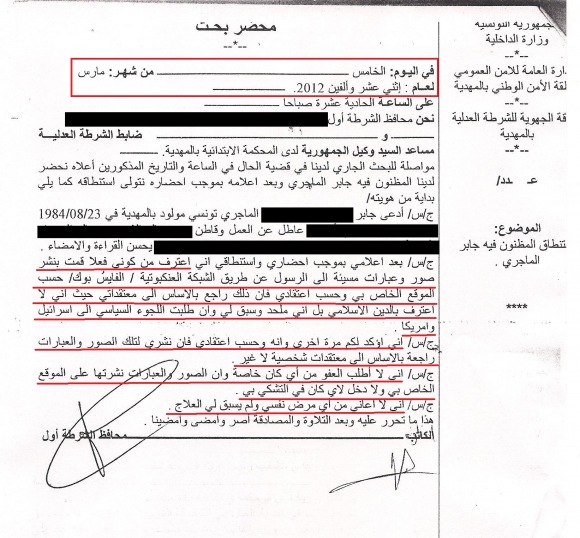 Two days later, on March 7th, Jabeur testified a second time. He changed his testimony. Remember that Ghazi’s account mentioned that his friend has been tortured, which we have not been able to verify since we were not able to see Jabeur in prison or meet members of his family. So on March 7th, Jabeur declared that someone consulted his Facebook account in front of him during the investigation and noticed a book which he had written. This book is titled “The uabs band” ( عصابة uabs) in reference to his former employer. He admitted that in the book he named certain employees who harassed him in the past and also spoke about his unfair dismissal. He said he wrote the book seeking vengeance and also to provoke public opinion and admitted to having purposefully blasphemed Islam and the Prophet by using caricatures that were given to him by his friend Ghazi Béji, who was well known to the inhabitants of Mahdia as an atheist and mentioned the latter’s book “The Illusion of Islam”.

Jabeur also recanted his refusal to apologize from the night before, asked forgiveness from everyone he might have offended and declared that he regretted his acts, blaming them on personal motives relating to several employees of the SNCFT (Tunisian National Railway) from which he was unfairly dismissed. 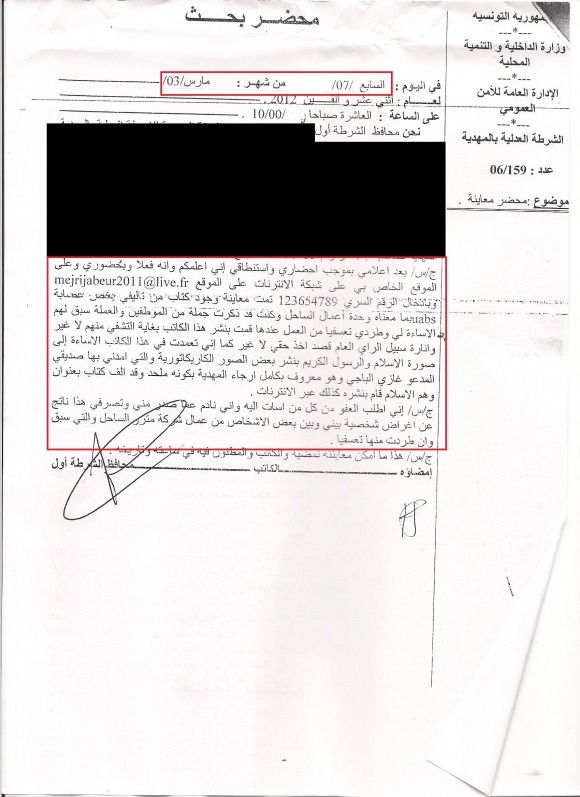 On March 8th, an order to prolong his detention was drawn up: 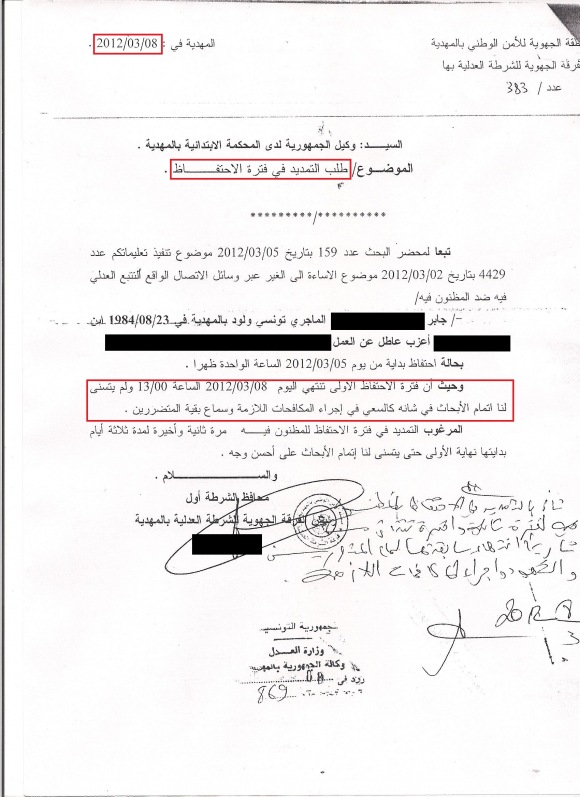 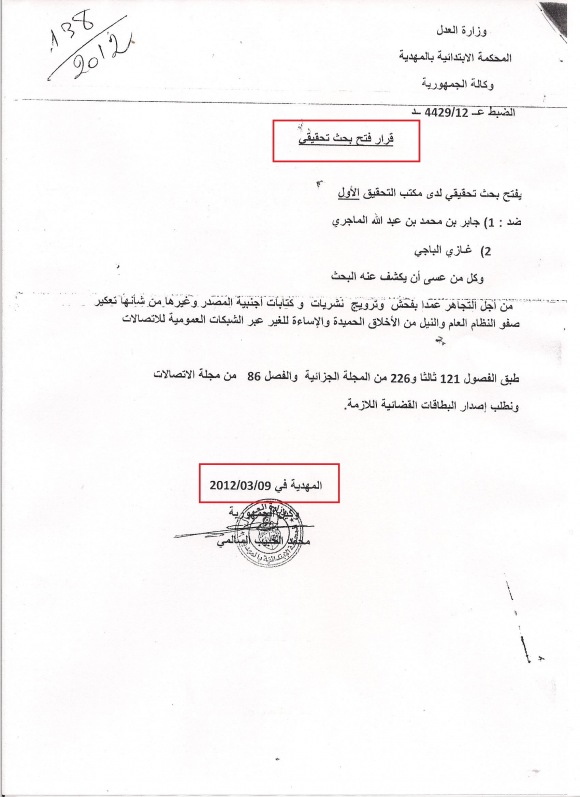 March 9th, an ordinance of instruction was issued against Jabeur and Ghazi for moral transgressions, diffusion of foreign publications and writings and breach of public order and bringing prejudice against a third party by using social networks on the basis of articles 121-3 and 226 of the penal code and article 86 of the telecommunications code.

The same day, the police raided the homes of the accused and confiscated a computer, a hard drive and 11 pages from the Internet: 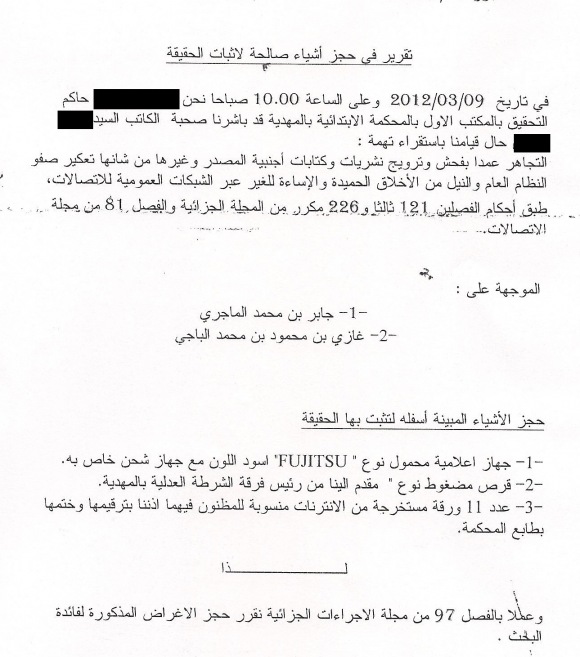 March 12th, a new report came out. The statement of offense revealed Jabeur’s pseudonym (Iheb Gammarth) and described the published caricatures (which Sheikh Zaouali preferred not to give us so that they would not accompany this article). Ghazi’s book “The Illusion of Islam” was mentioned again and was described like this: 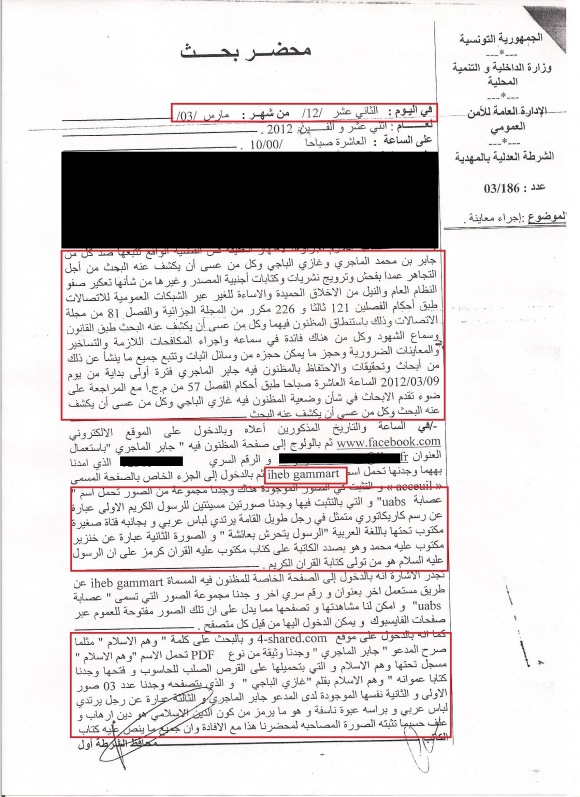 That same day (March 12th), a summons was issued for Ghazi. But Ghazi had already left the country, on March 9th. 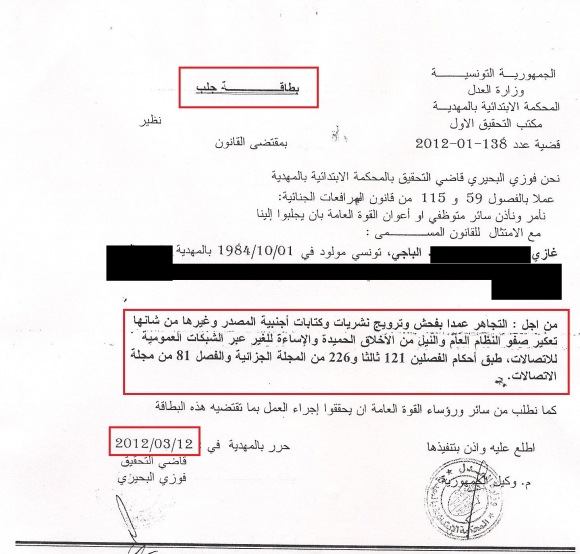 Where were the lawyers?

Up until the 12th of March, no document in our possession mentioned the presence of any lawyer. Sheikh Zaouali told us (and we have the video) that no lawyer would take the case. This is something Gahzi had already told me when I spoke to him on the phone and which his father later confirmed. According to Sheikh Zaoulai, his colleagues refused to do it on principle.

On March 13th, Jabeur went before the examining magistrate. The statement of offense said that the accused had explicitly refused to contact a lawyer. Another Facebook page, opened using a different email account (although also with the name Jabeur) was presented as evidence. Jabeur declared that it was Ghazi who opened it, for his use and who posted the photos. Jabeur said that he acted under Ghazi’s influence, and that he belonged to a conservative family. At this point in the statement of offense we could read the sentence :

“We then informed him that we were not examining him for his beliefs or views but that he he was pursued because his actions were against the law, given that the images that he posted offended the beliefs of others and that the were a breach of public order in addition to their pornographic content which was a breach of morals and an injury to others.” 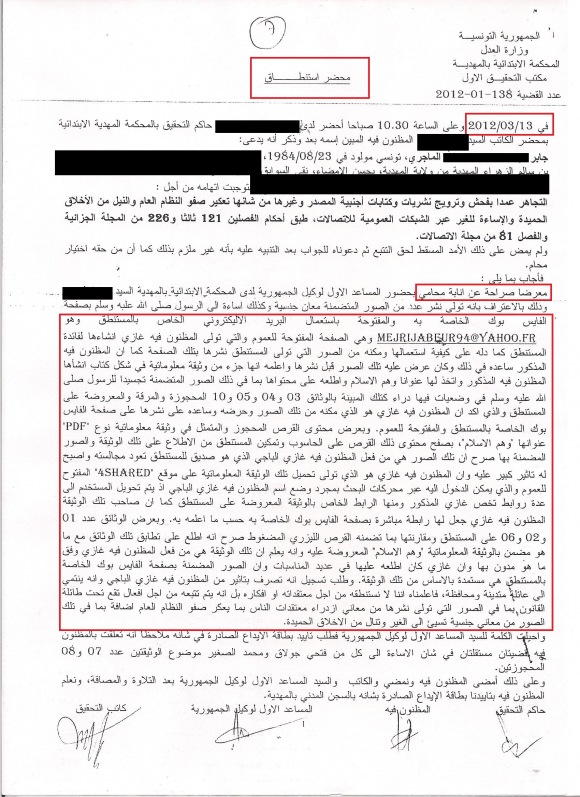 March 15th, two witnesses were heard: Sheikh Zaouali (one of the two plaintiffs – whose testimony is at the beginning of this article) and a second witness (whose name I will not mention). The second witness mentioned that in addition to this affair there were two others against Jabeur for defamation but declared that they were the object of separate complaints: 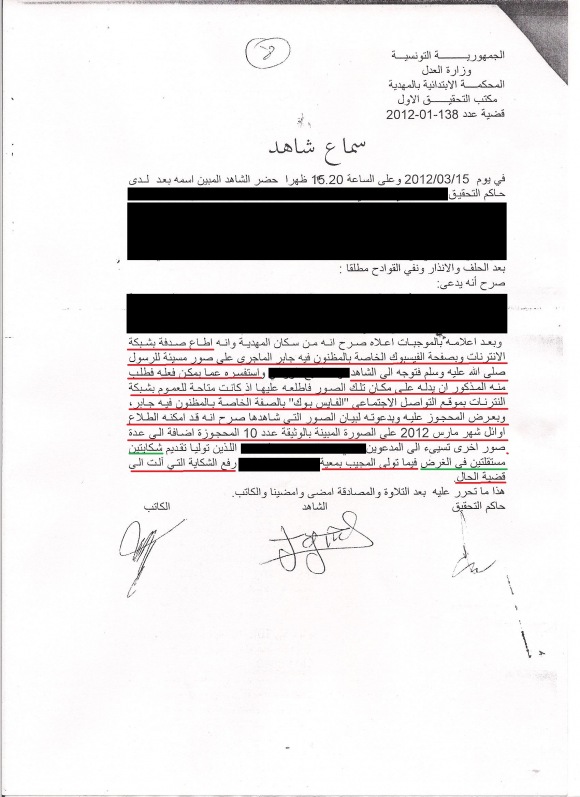 March 28th, 2012 the sentence was announced: Jabeur and Ghazi were condemned to seven and a half years of prison and 1200 dinar fines. 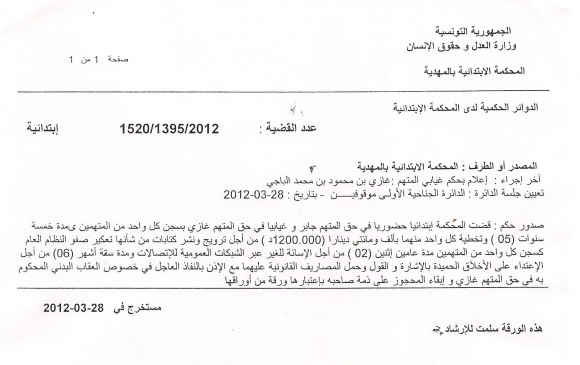 Jabeur has appealed. Ghazi’s father has engaged a lawyer who will object since he was judged in absentia.
We left Sheikh Zaouali’s office and made our way to Ghazi’s house where his father was waiting for us. Later, we met with Sheikh Wanness, the reputed Salafist leader in Mahdia because we had heard that there were death threats against the accused, and that according to rumors they would send someone into Jabeur’s cell to assassinate him. Sheikh Wanness denied these threats.

[Editor’s Note] This article was originally published on the author’s blog.
Translated from french by Edith Mulhern