Time for a “Bourguibist” Comeback? Essebsi Butters up Tunisians in Monastir 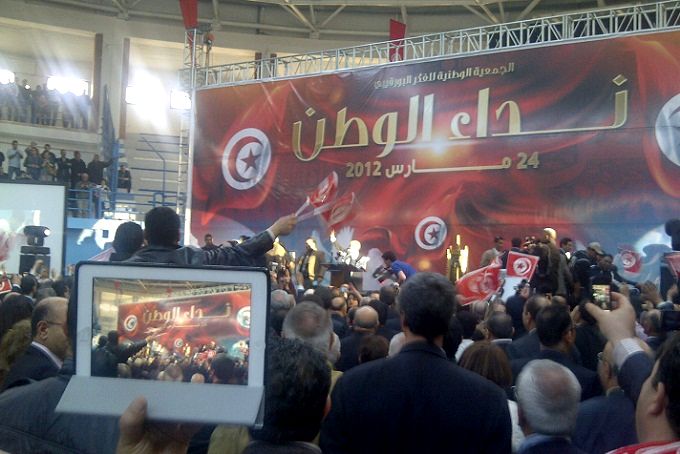 The dome shaped room was a sea of red and white. It smelled of amber musk and sea. The attendees were mostly well over the age of 40, and the buzz of excitement was impossible to miss. You would think you were attending a Michael Jackson concert. What’s the occasion, you ask? Well, to celebrate and adulate the ultimate star of the show, Beji Caid Essebsi – or, as the attendees would proudly tell you, to “unite all political forces as Tunisian above all else,” and to “to start a new era in Tunisia’s history.”

There was nothing particularly new about the rally, however. Held in Monastir, which in the heart of Tunisia’s coastal region and home to the country’s first post-colonial president, Habib Bourguiba, the rally was supposed to announce a merger between parties who share the former president’s vision. Instead, the rally was nothing more than a nostalgic ruck that was going through Bourguiba era withdrawals, and who was having great difficulties letting go of the past.

Political meandering abounded as well: Nejib Ahmed Chebbi, the leader of the Progressive Democratic Party, was there, as was Boujomaa Remili, the Secretary General of Ettajid Party. So was Lotfi Bouchnak, a Tunisian singer, and Khawla […], the student at Manouba University who stood up against a Salafi student who was taking down the Tunisian flag. Oh, and can’t forget the former RCD-iste, Kamel Morjane – who served as Ben Ali’s defense minister from 2005-10, then as his foreign minister from 2010-11.

How clever – and politically adroit – it is to have this group all on the same stage.  Caid Essebsi, a political actor since Bourguiba’s era, has been hanging around ever since the October 23rd elections waiting for the right moment to reenter the Tunisian political scene.

It appeared that Essebsi and his crew were desperately seeking to rebrand the RCD. The Caid Essebsi and co. are succeeding, albeit only within a small niche. To this niche, Essebsi is simply the reincarnation of Bourguiba, representing modernity and ‘balance’ in social values. But outside of the niche, not many will fold. In fact, the ostentatious nature of yesterday’s meeting (with a marching band, LCD screens, and I mean come on – the meeting was titled “The Call of the Nation”) was enough to lead one to believe that Essebsi has some dossiers to hide. Essebsi has been accused by many to be behind the torture of Youssefite prisoners back in the 1960s. His past with the Youssefites is a long and complicated one – and one that he would, naturally, prefer not to be reminded of.

At the rally, Essebsi played a lot of “if you insist” politics. All speakers went up to the podium before him, increasing the audience’s anticipation. Finally, after speaking for only 3 minutes, Essebsi said, “I really don’t want to take up too much time.” Of course, he went on to finish his speech – which included an disproportionately large amount of rhetoric regarding how Tunisia should be. He interrupted his speech one more time to say, “At this rate, I can keep talking to you all night,” to which the audience enthusiastically responded, “All night, Beji!”

The current divisions in Tunisian society between the conservative Islamists and the largely fractured left are serving as the perfect storm to bring back RCD-style nepotism. Essebsi and co. are taking full advantage of this political landscape by playing identity politics.

What is alarming, however, are the scores of left-wing parties that made their way down to Monastir yesterday. The left should be more careful about its actions and what they reflect – the Tunisian left is already painted as an elitist segment of society. Why exacerbate the image, and in turn appear to betray the very values that led to Ben Ali’s ouster?

While Bourguiba did many good things for the country, he still ruled with an undeniably authoritarian iron fist. Let us remember that Bourguiba once famously exclaimed, “System? What system? I am the system!” Beji Caid Essebsi’s attempts to bring the system of personal power and nepotism back might gain ground in the next parliamentary elections. Last night’s meeting in Monastir was a superb communication tactic – Essebsi is buttering up the Tunisian public, attracting potential voters to his ranks by using the sweet smell of ‘stability.’ However, we must look forward, and not backward, to move Tunisia along. The Tunisian public must remember that stability and democracy are not, as Essebsi would like us to believe, mutually exclusive concepts.

One tweet I read last night summed it up perfectly: Ben Ali attempted to get rid of the Bourguibistes and the Islamists. He succeeded with neither.