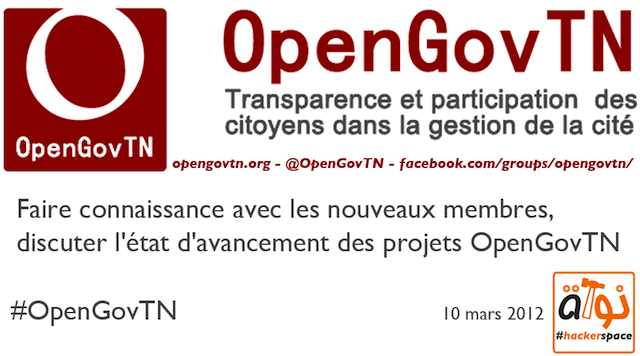 Following a mostly online presence, a few members and supporters of the Tunisian OpenGov initiative gathered last night, March 10, 2012, at Nawaat’s Hackerspace – a community meeting space created by Nawaat to facilitate the exchange of ideas and resources – a perfect space for OpenGovTN to meet. OpenGovTN, an initiative that was launched some months ago, aims to institutionalize the concepts of open governance, open data, and transparency in a new Tunisia on all governmental fronts.

The members gathered – but there was no agenda that was agreed upon to give meaningful purpose to the meeting. Thus, naturally the first order of business was to draft and agree upon an agenda. Following a myriad of suggestions from various members, the group agreed that the two most important issues to discuss were: (a) the challenges associated with the group’s current organizational structure, and (b) the popularization of the concept of OpenGov. 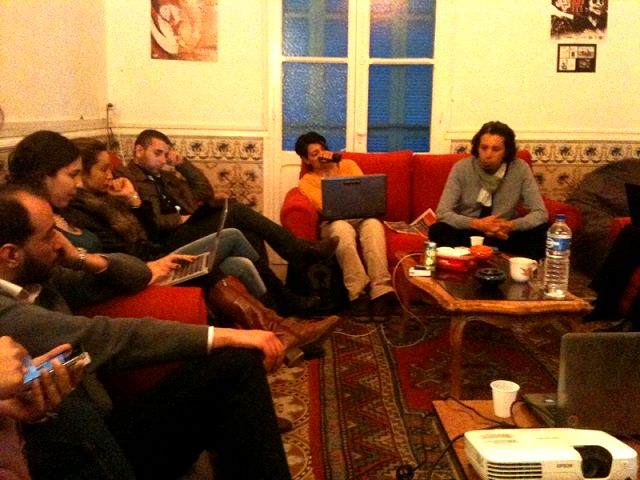 The goal was to identify and discuss problems, and by the end of the meeting, have a well-defined list of solutions that all members can participate in preparing.

The discussion kicked off by several members listing off the current problems with the group’s organization. For example, the Facebook group’s vertical presentation, some noted, made it very difficult to follow conversations. It is not always clear who does what and what projects are presently being worked on – and the progress made on each respective project, some said, is information that is near impossible to find. Further, what if a member does not use Facebook? It was argued that such members are de facto excluded from active and purposeful participation.

As for rendering the concept of open governance more accessible and relatable to the general Tunisian public, few suggestions were made – and even fewer pragmatic action items were delegated or committed. The group started by first identifying the targets of its activities and projects: citizens, the National Constituent Assembly, the government, civil society, political parties, and independent institutions. Some also suggested getting in touch with the student population to begin collaborating on projects that raise public awareness about what open governance really means and entails.

The conversation was indeed a healthy one, focusing on the challenges facing the group and making laudable efforts to find solutions. Yet, what was most striking about the meeting was that while the discussion was fruitful in ideas, it bore no practical, pragmatic action items. It appeared that most of those who attended came in to simply give their two cents – few actually made any sort of commitment to work on the issues (and there are many) that were discussed.

Perhaps this is the biggest problem to begin with. Discussion can only take us so far. If we really plan to implement the principles of open governance, facilitating more effective citizen participation, we need to adequately assess concrete needs and address them head on. We need committed individuals who are able and willing to contribute time and effort, and not merely ideas.