The overthrow of Ben Ali, ex-Tunisian president, opened up the opportunity for many international Non-Governmental organizations to endorse their activities in Tunisia or open new office. During Ben Ali’s rule, human rights and fundamental liberties were highly suppressed and human rights activists were often constrained to militate in unrecognized organizations.

The organization still continues its work to publish more reports – the last one dating of January 13th, 2012 – about the human rights situation in Tunisia. However, “unlike what most people may think, the situation hasn’t improved that drastically”, says Lotfi Azouz, Amnesty International. There are some important international conventions adopted by the UN general assembly that Tunisian hasn’t signed nor ratified yet. For instance, Tunisia still didn’t sign yet the Optional Protocol of the ICESCR adopted in December 2008. The protocol guarantees Tunisian citizens the right to submit their complaints and suits to the UN’s committee of Economic, Social and Cultural rights in case of concrete violations by their countries. “The Tunisian government still hasn’t expressed any intention to sign the protocol yet” affirms Azouz.

Amna Galleli, Human Rights Watch reporter and the bureau attaché said that the organization didn’t encounter any difficulty to open their office. “The government has facilitated a lot of our activities and missions around the country. The locals have been helpful and welcoming too.” According to her assessments, the country is enjoying more rights and liberties when it comes to freedom of press and the independence of judiciary though it is noticeable that the government is still slow to deal with reforms with broader scope to break up definitely with the ex-regime. “As for now reports are still mixed.”

Olivia Gré, Reporters Without Borders, expressed the same concern, however, regarding the state of liberty of press and expression in post-revolution Tunisia. “We (RWB) are worried about the current situation of freedom of press, especially when Tunisian journalists are assaulted by Tunisian salafits”, she stated. This concern coincides with the trial of Nabil Karoui, head of Tunisian private channel Nessma TV that aired the animation movie Persepolis which portrayed God in a human shape. Such practice is considered as blasphemous to Islamic values and is penalized by Tunisian law for up to three years of prison. The incident was that two Tunisian notable person Zied Krichen, Editor-in-chief of Al Maghreb newspaper and lawyer Hamadi Redissi were assaulted by men wearing beards nearby the court that tried Karoui. Gré also expressed disappointment regarding the delay of the trial leading to more controversy and confrontation between both parties that endorse and denounce the trial.

It is noteworthy to mention that Nabil Karoui is being tried on the basis of an old press code, drafted by Ben Ali chamber of deputies in the past years. Reporters without Borders qualified the code as “black hole” that obscured the media sphere in Tunisia for decades. The organization reproaches the government its apathy to implement new reforms to protect journalists and media scene in Tunisia from such prosecution. 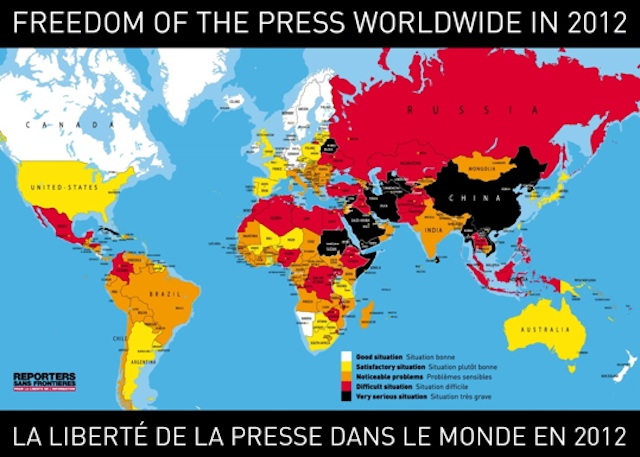 Regarding this matter, Reporters without Borders classified Tunisia as in “bad situation” within its Freedom of Press Situation 2012 world map, which is a bit surprising after the successive post-Ben Ali’s commitments to grant more freedoms to the media and guarantee the freedom of information.

For the moment, the government did only release statement but no foreseeable actions. The current government did not take any measures to implement the new code of press as draft by the Tunisian pre-elections Commission for the Achievement of the Revolution’s Objectives, headed by Iyadh Ben Achour. Instead, Media is still also the target of the government’s critics.

Reporters without Borders and Human Rights Watch both opened their offices in early October, 2011, prior the elections of the constituent assembly. Their work has been recurrent since then and their reports are published on their organizations’ websites if not available for press releases.