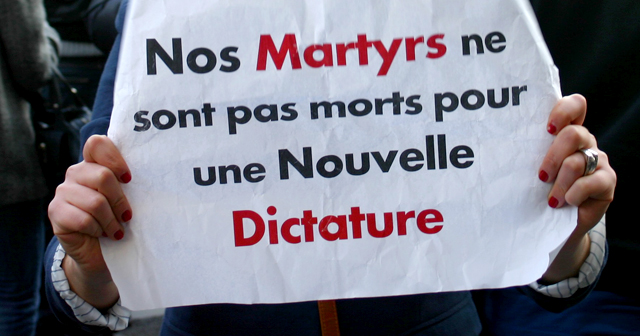 As we are slowly sobering up from the political binge that followed the Tunisian uprising, one could start to discern the outlines of the new scene we are presented with. As the dust settles, one could see a new order taking place, casting its shadow on our lands, filling the cracks of the former regime and trying to maintain the status quo that keeps our elite and their money masters satisfied. In return, the rest of us get an election date. Yes! That’s what we get for all our sacrifices. Plus, of course, an endless stream of revolutionary bs on our local medias reminding us of how great we are and how glorious our “Revolution” is.

But how did it come down to this? How could a popular insurgency that epically started with the click of a lighter by a man soaked in paint thinner igniting the fury of the long forgotten people of the Tunisian heartland, and all of the Arab World, ends up with a shadowy interim government with several of its members having dual citizenship, half of its members probably never have been to Sidi Bouzid or Gasserine, and I bet some of them cannot point at Thala on a map? It is hard to overcome the hangover. But let us forget the pounding headache and ask some legitimate questions:

Did Beji Kaid Sebsi visit any of the regions that spawned the grassroot movement that toppled the big brother regime of Ben Ali, and listen to their ambitions and aspirations?

Will Clinton, Lieberman or McCain provide a better perspective of what needs to be done to guide us through this extremely sensitive period?

Why are many appointed officials trying to showcase their money borrowing skills, as if the country is on the brink of bankruptcy?

Should we borrow more money multiplying our external debt before conducting a thorough and transparent assessment of the state of our economy?

Why is this self appointed political elite, despite its temporary nature, trying so hard to ram the economical agenda of the IMF and the WB (along with the other usual suspects), an agenda that proved to be a failure under Ben Ali’s regime and led to the polarization of society, engendering the wide economical disparities that are at the origin of the current crisis.

The argument is that this is just a temporary situation, and that these brave people are just paving the way for a free and transparent election to take place. The ballots will have the last word, they say. The country is in good hands and we must allow these smart people to sort it out for the rest of us. Never mind their shady business connections. Never mind their support of the former regime, after all, they all had to. So go back to sleep until July the 24th and let qualified people take care of politics.

I’m sorry folks but it doesn’t look quiet right! It seems obvious that some hidden interests are manipulating the scene in order to absorb the aftershocks of what they are trying to sell us as a “revolution”, though I doubt that’s what they call it behind closed doors.

“Have you confused your cat recently? I believe your cat badly needs to be confused!”(Monty Python)

Considering the political virginity of the average Tunisian citizen, confusing him will be an easy task, especially with the support of foreign interests that tried to share their “know how” in riot control right before January the 14th, now they are offering their know how in crowd manipulation.

The never-ending praises for our glorious “Revolution” on the medias are starting to rhyme with the praises of the blessed 7th of November. The Islamic threat is always a foolproof mean to spread confusion especially when targeted toward the younger population. The threat of the communist unbelievers will irritate even the moderate Muslims. Add to all that the ongoing refugee crisis on the border and you’ve got a very confused Tunisian who just wants to get over with this whole mess.

But not just yet! Amidst the confusion, the Tunisian citizen has to choose between an assortment of political parties. 49 of them so far. Popping all over the political spectrum, they include newbies (that soon will realize that a party runs on cash not on ideas), as well as prominent figures well connected to the sphere of politics and business. Many of them are copycats of themselves (primarily meant to blur the vision), while others are just reincarnations of the RCD, running under the “destourian” legitimacy slogan. The latters are expected to dominate the political scene considering their solid funding, rallying experience as well as the sympathy of the Medias. So, on July the 24th, at the pearly gates of democracy, Saint-Sebsi will deliver us to fittest of the fittest of the political game, to continue to do what he is already doing: cleaning up this mess caused by the people of Tunisia.

However, the average Tunisian citizen is not the only one who is confused. Even the most enlightened thinkers and political analysts could not predict the current outcome. The chain reaction that started in Sidi Bouzid and spread around the country (and later throughout the whole region), will mark the beginning of a new era of global politics. The imperial forces are watching with awe their mighty shepherds being defied, chased away and trampled underfoot by the angry mobs of people who simply hit rock bottom and didn’t have much to lose but their balls and chains. A true grassroot movement, with no leadership to be held accountable, left the imperial forces puzzled by the situation. With no one to antagonize (as in the case of Cuba, Venezuela, El Salvador, Iraq…), they had no choice but play along the “Revolution” game while trying to implement a damage control strategy behind the scene.

We, the people of Tunisia, must take advantage of this confusion to turn this popular insurgency into a full fledged revolution. We proved twice, during the two historical sit-ins, that January the 14th is far beyond a hunger riot or a short outburst of pride. This transition period could be far more important than what follows. We are off the beaten paths and we have no role model to aspire to. So let us keep the pressure on and take our destiny into our own hands.