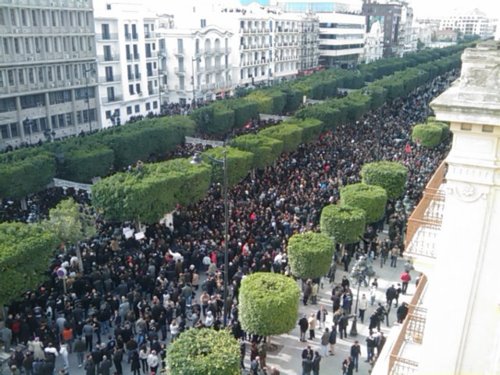 While I was making hectic last minute preparations to travel to Tunisia as part of an Amnesty International delegation looking into human rights violations, in the context of the social unrest that has shaken the country since late last year, a colleague joked that I would be sitting in a hotel room in Tunis watching developments on Al Jazeera. While we laughed it off at the time, the prophesy proved to be somewhat true.

From the moment of my arrival on Friday 14 January, I could feel that Tunisia was a different country. Unlike the norm during previous Amnesty International fact-finding visits, we were not followed by security forces from the airport. It was clear that their concerns were far beyond obstructing an Amnesty International report criticising the country’s appalling human rights record.

About two hours after our arrival, the Tunis airport and airspace were shut down, apparently by the army. After that, events unfolded with incredible speed.

A demonstration in front of the Ministry of Interior was violently dispersed; President Zine El Abidine Ben Ali dismissed the government; and Tunisian television announced the imposition of a nation-wide state of emergency and a curfew between 5pm and 7am until further notice.

While trapped in the hotel room waiting for the much anticipated announcement promised on Tunisian television, we were overwhelmed by a slew of rumours: the army had taken over, Ben Ali had left the country, and his wife’s family had been arrested by security forces while trying to flee the country. Some of them proved true – the jury is still out on others.

As frustrating as it is to be so close to historical events, and yet so removed in a hotel room, I still got a sense of the momentous occasion.

I could see smoke rising from the centre of Tunis.

I could hear shots in the distance.

I could hear people whistling and clapping inside their homes when it was announced that Ben Ali had relinquished power, and that the Prime Minister, Mohamed Ghannouchi, had initially assumed the functions of the President until elections are held within six months (the speaker of the Tunisian parliament has since become the acting president).

Outside my hotel window I saw empty, still streets. At about 10pm, an army vehicle drove by. An hour and a half later, I could hear helicopters circling above.

Before the imposition of the curfew, we had the opportunity to meet journalists gathered at the press syndicate. Most of them had just returned from the protest in front of the Ministry of Interior.

They told us that security forces had fired tear gas at protestors and beat some of them. They complained about the official media blackout and the arrests of some of their colleagues. They expressed sympathy to the dozens of protestors who have been shot by security forces across Tunisia in the past few weeks.

One said that Ben Ali had survived for 23 years through the repression of freedom of expression. Today though, they openly engaged in an animated and candid debate on the future of their country without fear.

After two decades of ruthless repression in the name of security, Tunisians will be expecting the Tunisian authorities to finally begin to uphold the human rights which they have spent so long restricting.

The Tunisian authorities have also ruthlessly cracked down on dissenting voices. Political opposition has been crushed, independent civil society organizations have been denied legal registration, or have been subject to “coups” by government supporters. Human rights defenders, lawyers or journalists have faced surveillance and intimidation on a daily basis.

Security forces, in particular the feared “police politique”, controlled so many aspects of Tunisians’ lives.

It remains to be seen whether this new start for Tunisia will lead to old abuses being brought to account.

While Tunisia’s future remains unpredictable, it is certain that the uprising has dramatically altered the face of Tunisian politics.

Its impact will no doubt be felt across the region – where other political systems survive through the repression of dissent with an iron fist and total disregard of human rights, as shown by small demonstrations in Cairo this evening calling for the resignation of President Hosni Mubarak, in power since 1981.

It is difficult to believe that events unleashed in December by the desperate and tragic act of Mohamed Bouazizi, setting himself on fire after police confiscated his fruit and vegetable stall, lead to the departure of Ben Ali, in power for two decades, from Tunisia less than a month later.

On 5 January, Mohamed Bouazizi succumbed to his injuries; but he will certainly be immortalized in modern Tunisian history. Ben Ali’s legacy is less clear, particularly in light of rising calls for his prosecution for human rights violations committed during rule.