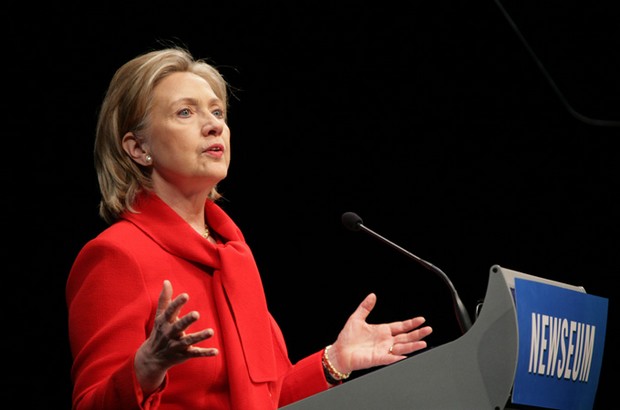 Whether its co-option or jumping on the ‘netroots’ bandwagon, the state department’s mandate of pursuing US national interest overseas will inevitably prove antithetical to the ambitions of grassroots activists in the Arab World [EPA]

This opinion piece focuses on grassroots digital activism in the Arab world and the associated risks of an inevitable collusion with US foreign policy and national interests.

My primary concern, above all else, is that by placing internet freedom within its core agenda of foreign policy, the US will be disinclined to engage in ventures which may compromise the ‘stability’ of dictatorial Arab regimes which are complicit in said foreign policy.

It is unrealistic to expect the US to aggressively work to boost political dissent against their closest Arab allies. Therefore we cannot afford the risk of powerful state actors co-opting the internet freedom agenda, essentially serving their own geopolitical strategy which is wholly divergent to the viewpoints of online political activists seeking genuine freedoms for themselves and more so for their fellow citizens – unquestionably, a more noble pursuit to be engaging in.

Another significant concern regarding state department co-option is its effect on already existing bridges of productive discourse – between activist bloggers from the Arab Middle East (AME) and centres of research located primarily in the US. Ties established over time and defined by mutual respect and trust will almost instantly be shed.

Unless something changes, the dynamic between US foreign policy makers and political activists located throughout the AME will inevitably sour. Activists will feel somewhat betrayed as their courage and initiative is being diverted towards an unintended end – US national interests.

When considering that many of the people I refer to are pioneers in forging a virtual public sphere – shapers of Arab public opinion – it is disheartening to see their valid attempts to challenge the political status quo relegated by the sheer fact of association with the state department and other US government agencies. An association that will at present indirectly (but at some point in the future, no doubt, directly) place a straight jacket via a set of ‘Beltway’ created ‘norms’.

It is vital to point out that none of the most successful digital activism campaigns and initiatives – defined by creative means of tackling deeply sensitive topics – have been funded by Western governments, institutions or donors.

In contrast to some of the currently US funded digital activism initiatives, the early ones have the following characteristics:

1. Necessity: Digital activism has been “invented” and rose out of necessity to fill the very gap that was left by traditional civil society constituents.

2. Independence: The digital activism field in the Arab world forms one of the most decentralised, unstructured and grassroots oriented dynamics of change that even most of the cyber-savvy local NGOs and opposition parties have serious trouble in “infiltrating” or exploiting. Consequently, this has made this movement independent, attractive and resistant to control.

3. Complexity: Digital activism is a complex multi-faceted movement which varies strongly from one country to another and is in a constant state of flux, via the adoption of new tools and strategies against resistance.

The effects of co-option

These early characteristics are about to change due to a myriad of factors and actors that need to be understood in order to prevent digital activism in the Arab world from losing its autonomy.

The existential question is how to overcome these challenges and preserve Independence while addressing the needs of building a vibrant, efficient and solid digital activism field.

Caught in the middle between authoritarian regimes aggressively engaged in repression, internet filtering and monitoring on the one side, and growing attention from Western agencies and associated NGOs on the other, digital activists and online free speech advocates in the Arab world are going through one of the most challenging phases of their short history that could alter their ecosystem dramatically.

In November 2009, Hillary Clinton, the US secretary of state, announced the Civil Society 2.0 initiative which will help grassroots organisations around the world use digital technology, “allocating $5mn in grant funds for pilot programmes in the Middle East and North Africa that will bolster the new media and networking capabilities of civil society organisations.”

Following the above initiative, on January 21, 2010 Clinton during her “Remarks on Internet Freedom,” elevated internet freedom to the status of a major foreign policy objective for the new Obama administration.

Furthermore, giant US based internet companies such as Google, Yahoo! and Twitter realise the value of internet freedom. Such interests at times have and will coincide with those of the US administration.

Google is now working with US and European officials to build a case that would make internet censorship a trade barrier.

Another worrying development is the “invisible revolving door between Silicon Valley and Washington,” if I may borrow the expression from Evgeny Morozov, as many state department officials are working for Big Web, with four Google employees having gone to work in the Obama administration.

The most recent example is Jared Cohen, the technopragmatist and specialist on the use of technology to advance US interests, counter-terrorism and counter-radicalisation, who served as a member of the secretary of state’s policy planning staff under both the Bush and Obama administrations and has just left the US state department to lead a new division at Google called Google Ideas. Cohen was the same person who intervened in June 2009 to keep Twitter online and delay its scheduled maintenance work in order to keep Iranians tweeting the post-election protests.

Many activists and bloggers from the Arab world have been helping research centres, such as Harvard Law School’s Berkman Centre – where they have helped in the translation, navigation, understanding and mapping of the Arab web and blogosphere. Examples of this are the Iranian blogosphere map and Arabic blogosphere map, both produced by John Kelly and Bruce Etling from the Berkman Internet and Democracy Project, which incidentally is sponsored through a grant of $1.5mn from the US department of state’s Middle East Partnership Initiative.

The litany of concerns continues. If we take a closer look at the framing and labeling used by this research we notice a visible focus on the mapping of “extremist”, “terrorist” and “Islamist” voices in the Arab blogosphere – which fits nicely into the modus operandi of the state department – a framework of Orientalising the AME.

Giving focus to such terminology undoubtedly reduces a vibrant community into a body that totally misrepresents its subjects. From a basic cultural viewpoint the AME is a mosaic of divergence – far from the monolith the state department has historically painted it as.

From a personal perspective what worries me more than the age-old practice of the politics of ‘them and us’ or marginalising ‘the other’, is the act of putting the knowledge acquired by global grassroots activists in collaboration with US research centres (and NGOs), into the hands of the policy-oriented DC crowd to foster US interests or cyber warfare in the world.

I am not questioning here the right of the US or any other regime to use internet freedom as a tool for diplomacy or as a medium of ‘soft power’ that serves its own national interest; realpolitik will endure. But, in this new context marked by governmental and private efforts to adopt internet freedom as a foreign policy tool, whether through researching, mapping, translating, supporting or funding, digital activists in the Arab world may need to be more sceptical about how to deal with the new variables and rethink with which they can best work and collaborate.

So now, when we want to collaborate with a research centre or an NGO to answer a survey or collaborate in a crowd sourcing project or provide insight about the context of certain topics, we may ask ourselves if we are not in fact collaborating with the US government via ‘proxies’.

For digital activism in the Arab world to achieve its noble aspirations, it must remain independent and homegrown, tapping its financial, logistic and moral support into its grassroots, seeking support from neutral parties that do not push for any kind of political or ideological agenda. Of course, this does not mean we should disconnect from global digital activism – a valuable enterprise which we need to understand, interact with and learn from.

At the present time, we urgently need to resist every governmental attempt to hijack or politicise our space, publicly denounce it and make sure that we are making informed decisions, rather than naively accepting ideologically tinted internet freedom funding and support.

If the US and other Western governments want to support internet freedom they should start by prohibiting the export of censor wares and other filtering software to our countries. After all, most of the tools used to muzzle our online free expression and monitor our activities on the internet are being engineered and sold by US and Western corporations.

The other problem is that the US and other Western governments are not challenged from the inside about their policy. US free speech advocates and dear friends should put more pressure on their own government to halt the export of these kinds of tools to our authoritarian regimes. However, at present the focus instead is to lobby for more money to help build yet more hyped circumvention tools or to support ‘dissidents’ to topple their regimes.

You can find the extended version of Sami’s thesis here.

Sami Ben Gharbia is co-founder and founder of several blogs revolving around censorship issues in Tunisia. Currently he is the Advocacy Director at Global Voices Online where he currently working on the project Threatened Voices. More about Global Voices Advocacy http://advocacy.globalvoicesonline.org/about/