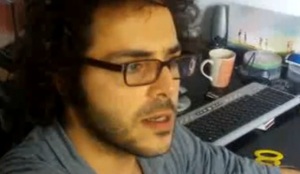 Tunisian activists geared up to organize a peaceful demonstration against censorship as part of the May 22 worldwide event announced to be the day against Tunisia’s “Ammar 404”: an imaginary person tunisians have created to symbolize their country’s world class filtering of the internet, and a pun on error 404 users get when they try to access censored content online. 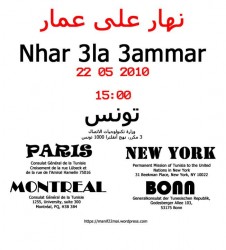 On May 21 in Tunis, bloggers @Slim404 Amamou, Yassine Ayari, and Lina Ben Mhenni filed duly filled forms to request a permit to demonstrate on May 22 as part of the protest. Unfortunately, or predictably, Slim and Yassine were detained by the police on sight for several hours and ultimately renounced their attempt as it was made clear to them that they will not be issued a permit and that their attempt is “forbidden.” They were interrogated, threatened as Slim relates in this video.

the Police demanded that Slim record a video asking people not to show up for the planned demonstration. Apparently, Slim had to negotiate the terms of this “friendly public service announcement.” Afterwards, he had to sign a document saying that he “understood that his call for a demonstration is wrong” and then he was driven out by the police to record that “friendly reminder to stay home” aimed to dissuade people from demonstrating.

On the following day, Aljazeera reported that the Tunisian police made a show of force in front of the Technology and Communication Ministry, the entity behind Tunisia’s state-built great firewall.

World media coverage for these events was scant, covered, Aljazeera hosted an hour long show opening a space for Tunisians to react to this new wave of protest. The show highlighted the Tunisian paradox: it was the first Arab country to introduce the internet, and as such became the pack leader in censorship.

The protest was not limited to Tunisia as tunisians took to the street to protest in several world capitals in front of their country’s embassies and consulates in Bonn, New York, Paris

While the world is busy debating the future of the Middle East and North Africa in light of pressing geopolitical conflicts, tunisians took matters into their hand using an impressive array of social media tools and techniques, they managed to translate online activism to real world actions in a peaceful and respectful way.  Not withstanding some grandiose pronouncements, world powers commitment to securing these freedoms for Arabs has so far been just hot air despite all the prattle about public diplomacy to “win minds and hearts” in the Arab World.

This post is dedicated to the memory of Tunisian dissident and internet activist Zouhair Yahyahoui.