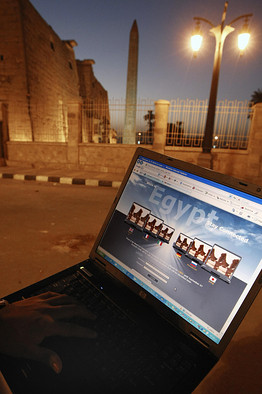 Back in October, the Internet Corporation for Assigned Names and Numbers, or ICANN, began processing requests for domain names in non-Latin scripts such as Arabic.

In theory, this lowers the barrier for lower-income Arabic-speakers who are unfamiliar with the Latin alphabet to get online.

But for now, at least, registration is limited to official government domains, sparking fears of increased censorship and online “ghettoization.”

Egypt, which was among the first Arab countries to apply for a domain names with Arabic letters, is ranked by Global Voices as one of the most repressive countries for bloggers.

Most experts agree that Arabic domain names will not enhance the government’s ability to block specific websites.

But once Egypt is granted its own domain name, local sites that wish to register with the official domain must approach the government authority, which could reject an application from say, an opposition newspaper.

“It’s likely that Tunisia, Syria, Saudi Arabia, and Bahrain will strictly limit which sites can be registered in their domain,” Jillian York, the project coordinator of the OpenNet Initiative at Harvard University, wrote in an e-mail to The Times.

“Other countries, such as Libya, … could see it as a financial opportunity,” she added.

The popular URL shortening sites bit.ly and ow.ly are registered in Libya.

York went on to say that many Arabic speakers may choose to register their site with a different Arab country that may have looser restrictions. The greater concern for many is how businesses and institutions will maintain control over their brand without owning the phonetic or translated equivalent website in all languages.

More questions are likely to arise as the mushrooming of languages besides English on the Internet changes the very nature of the global network (Google’s Eric Schmidt recently predicted that Chinese will dominate the Web within five years). Arabic is currently the fastest-growing language online, with about 300 million native Arabic-speakers worldwide. Moreover, the huge deficit in online content in Arabic compared with the number of Arabs online, between 3% and 5% of all Internet users, suggests Arabic content will grow exponentially in the next few years.

Whether this ultimately makes the Internet a more or less inclusive place is being debated. Critics worry that the introduction of domains in non-Latin scripts will create walls between online communities where none existed before, making it harder for people from around the world to communicate.

But innovations in translation and search technology could, in fact, make those barriers more permeable. Already, applications like Google Translate allow non-Arabic speakers to scan headlines from the Arabic press.

“Bridges are going to be crossed,” said Samih Toukan, a Web entrepreneur and the founder of the Arabic portal Maktoob, which was acquired by Yahoo earlier this year.

“There will still remain a gap because people tend to gather in communities on the Internet, but the gap will be smaller.”

Photo: An Egyptian user logs on in Luxor. Credit: AFP/Getty