“A demonstration is not a sign of success. Normally in a democracy, public opinion expresses itself in the ballot box… having to go back to the street is a sign of a process that is not succeeding,” Ahmed Gaaloul, a former minister and adviser to the Ennahdha leader and Speaker of Parliament Rached Ghannouchi told Meshkal. “It means that there is no stability, that there is lack of dialogue, and that there is a crisis. The need to go back to the street and calling the public opinion to come out with you is also—in a way—an expression of having again to show the level of legitimacy you have.” 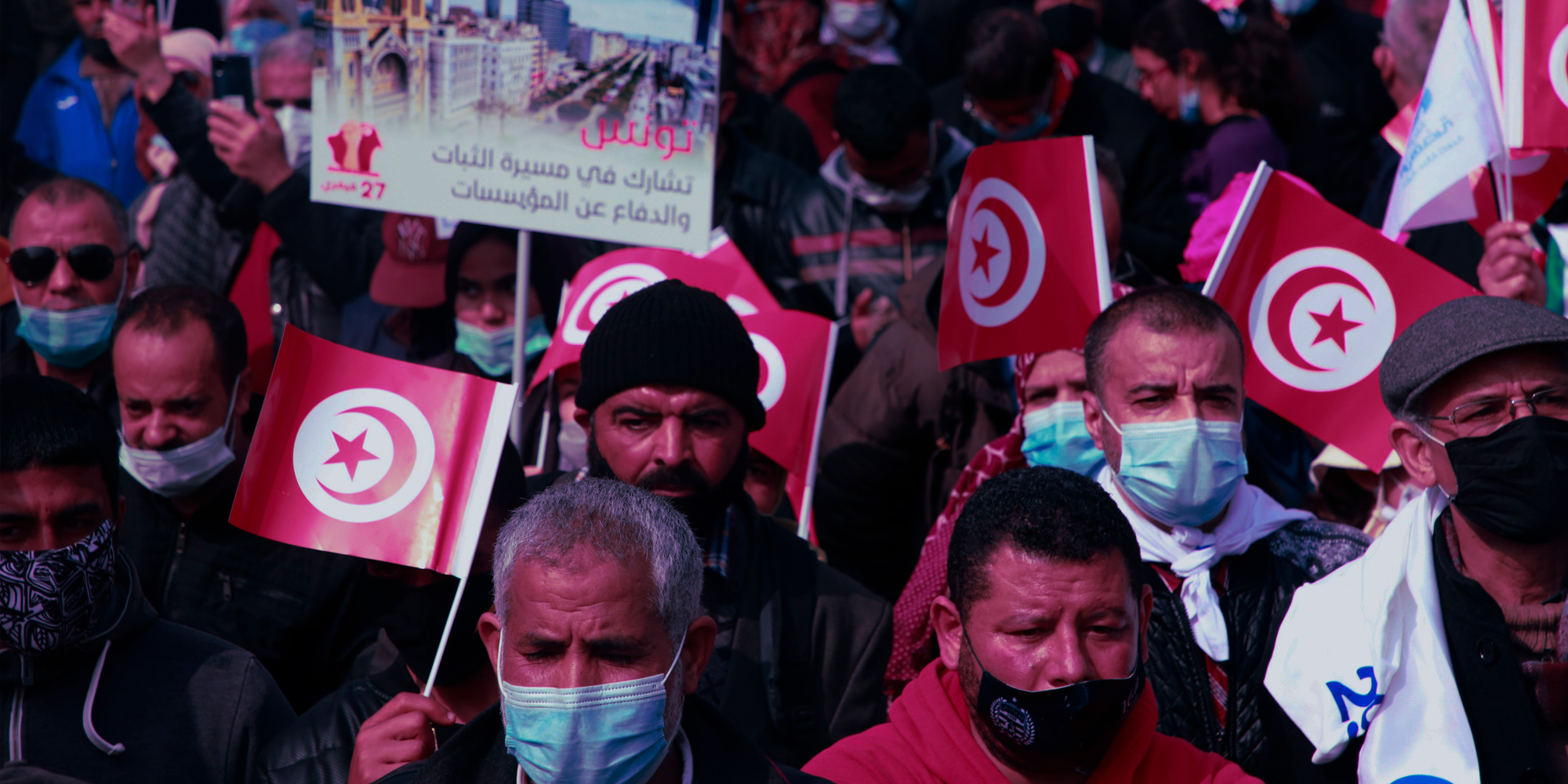 Of the recent party-led demonstrations, the largest by far was held by Ennahdha on February 27 in Tunis. Gaaloul claimed that about 100,000 people attended that rally; while the numbers in attendance are impossible to count accurately, photos shared by Ennahdha on social media appear to show crowds closer to 10,000 people.

“They shared pictures showing that they had about 60,000 people there…but realistically the number did not exceed 15,000,” said Islam Hakiri, a freelance photojournalist at the demonstration who said journalists were prevented from taking the photos they wanted by Ennahdha demonstrators.

The Ennahdha rally came one week after a rally by the Free Destourian Party (PDL by its French acronym) in Sousse on February 22, which gathered what appeared to be over 1000 people. However, Gaaloul said Ennahdha had already decided to organize its rally for February 27 in an executive bureau meeting on February 10. What PDL leader Abir Moussi “did was in response to our decision,” Gaaloul claimed. 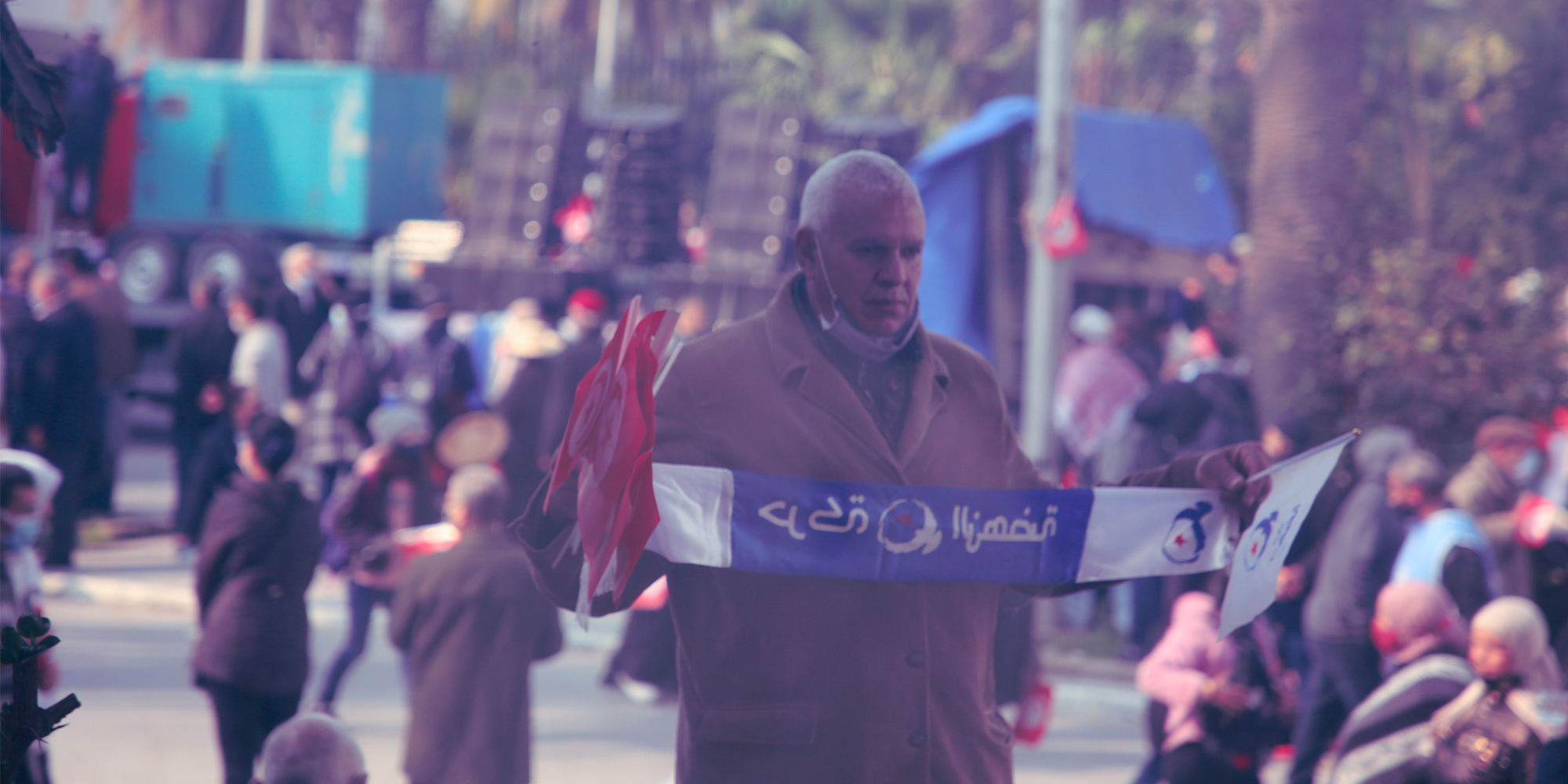 Ennahdha and PDL have been at loggerheads since the 2019 elections brought PDL into Parliament with 17 seats, and Moussi has used her new pulpit to regularly call for Ennahdha to be outlawed as it had been under the Ben Ali-led regime. Yet Gaaloul claimed Ennahdha’s demonstration on February 27 was less about responding to PDL and more about getting ahead of their own electoral base and about responding to earlier street protests which they believe leftist and center-left parties are using for political purposes.

Leftist parties—many of which did not win any Parliament seats in the 2019 elections—see accusations that they are instrumentalizing protests as disingenuous.

“The left is not the one leading the protests, especially in popular neighborhoods and interior regions. In the capital we could say that the left is leading in marches, but in popular neighborhoods… people are protesting spontaneously and are organizing,” Wael Naouar, a member of the central committee of the Worker’s Party told Meshkal on the sidelines of a demonstration in downtown Tunis on March 6.

That demonstration gathered about 200 people on downtown Habib Bourguiba Avenue in response to a call that was launched by 11 political parties, 64 associations, and 13 youth collectives. A key demand of the demonstration was the release of those detained in recent mass arrests—up to 2000 by some estimations, including many minors. Other demands at the demonstration included the decriminalization of cannabis and anti-Ennahdha slogans such as “Kicking the [Muslim] Brotherhood out is a duty” and “Colonial agents: the Nahdhaoui is a reactionary broker.” 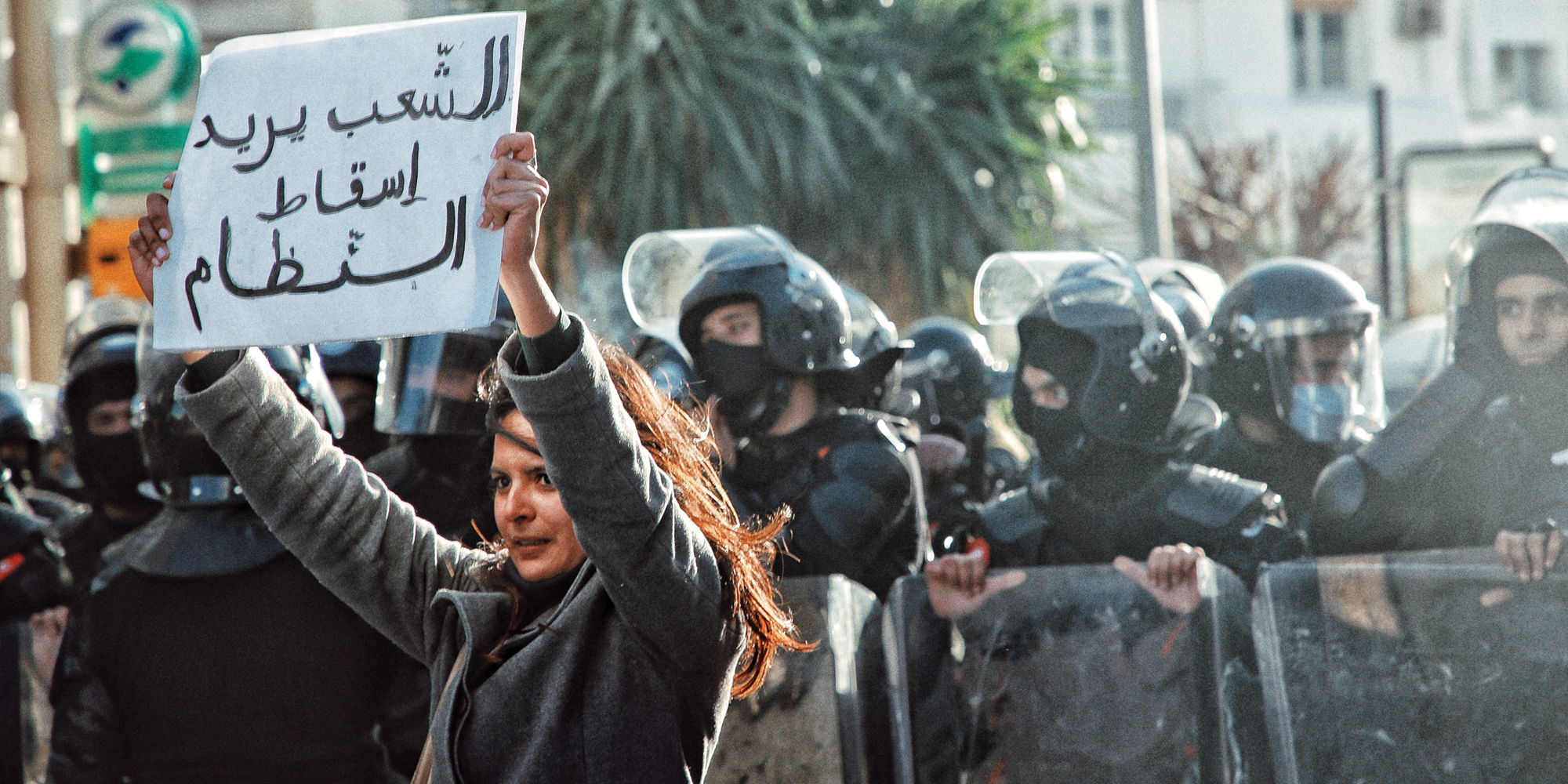 While the recent rallies of the PDL and Ennahdha have been organized as party affairs, leftist parties have instead taken to the streets in coalition with other groups they see as being—like them—part of the informal opposition to the current governing coalition.

Today’s protest is a continuation of a series of protests which were launched by multiple youth groups and political parties that are in the opposition today and believe that the situation necessitates the spreading protest actions in the country,
Zied Lakhdhar, the secretary general of the Party of United Democratic Patriots (ak WATAD), told Nawaat/Meshkal.

“Saying that the left is taking advantage of the protests is a word that should not be used because the left is part of these protests,” Naouar said. The “Ennahdha party—being the actual ruler and the link between all the successive governments that Tunisia has witnessed since 2011—is the one that led this country to failure…they have failed and all they have left is throw the blame on youth, left, women and so on.”

Naouar criticized how much Ennahdha spent on their February 27 rally. Many were brought to Ennahdha’s demonstration in Tunis from across the country by bus. The costs, including primarily transportation but also demonstration materials such as stages and banners, cost about 1 million Tunisian dinars (TND), according to Gaaloul of Ennahdha, paid for either from Ennahdha’s central party, Ennahdha’s regional branches, donations by Ennahdha supporters, or individuals who paid their own way.

Gaaloul said, noting it would come out to about 10 TND per person assuming that the rally convened the 100,000 people he claimed were present.

“That one million [dinars] is needed by the unemployed, the poor [zwawla], students for their scholarships, underprivileged families…but where is it being spent? In demonstrations,” Naouar told Meshkal. 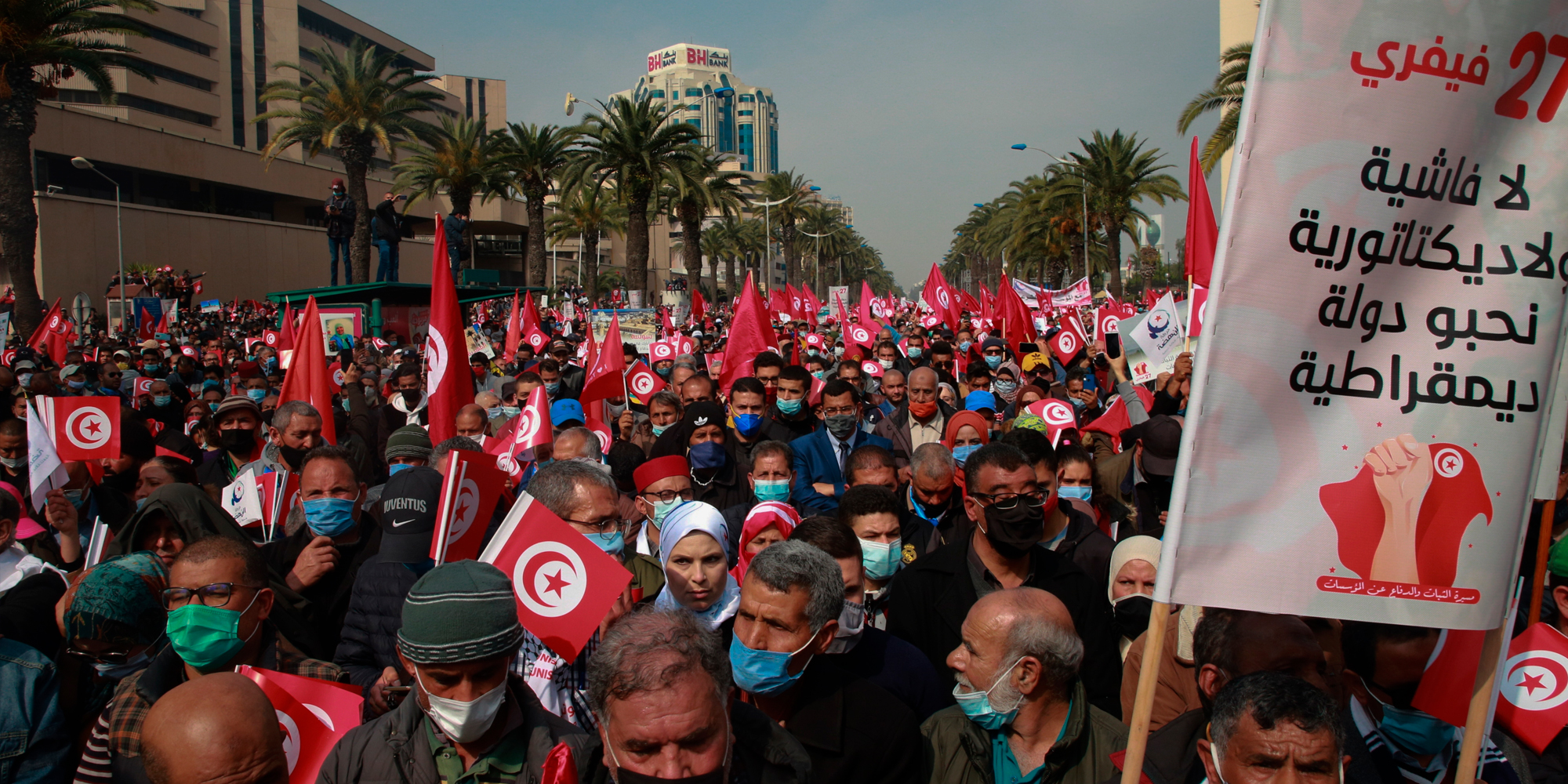 For Gaaloul, criticisms of Ennahdha’s funding of the demonstrations are “populism, pure populism. Because if we count how much the damage of those people who go out in the street to break things—I mean properties—or to set them on fire, then we are way below those numbers.”

Gaaloul is referring to protests that took place in the second half of January when about a dozen neighborhoods around the country saw confrontations between residents and police; at the time, mainstream media and government officials largely characterized the events as acts of vandalism and looting. There was some speculation that a chain of supermarkets—Aziza—was the target of vandalism and looting during these demonstrations, due to its owners’ alleged links to Ennahdha. However it is worth noting that demonstrations began on January 15, right after the government suddenly mandated a four-day lockdown ostensibly aimed at slowing the spread of Covid-19 but which in effect shut down informal markets and traderswhile allowing chains like Aziza to remain open. Interviews with locals from Hay Ettadhamon following clashes with security forces featured people dependent on daily, informal commerce for their incomes and livelihoods.

“I can make a clear distinction between this [socio-economic demands] and the acts of violence and theft that came with it, which our security forces had countered with all professionalism,” Prime Minister Hichem Mechichi said at the time in a nationally televised address.

While Gaaloul of Ennahdha characterized the January and February demonstrations as acts of vandalism, he also claimed to share one of the main demands put forward by social movements, leftists parties, and human rights groups: that those detained, especially minors, be released.

One needs to be clear that those youth who were stopped by the police during those actions, we need now to not let them be victims of that. We need to stand by them and even make what we can do in order to free them because, first of all, they are young. Secondly, they behaved in a way in which they thought was correct. Thirdly, we need, as parties which are representing the system—unfortunately—to convince them not by the power of coercion of the government of the state, that we are not their enemy, that we are here for them, for their better future. If we have even ten or 100 persons, young ones, getting out to protest violently in the street, it means we have failed somewhere,

Gaaloul said he was referring only to protests in “marginalized” areas of Tunisia in January and not subsequent protests in downtown Tunis by what he calls the “political elite,” who he claimed were not arrested and “the police really restrained themselves from reacting to those verbal aggressions,” by those protesters.

At the time of clashes between police and demonstrators, Ennahdha’s Executive Bureau released a statement offering a “strong condemnation of the attacks on private and public property, and the acts of looting and vandalism against administrative institutions and businesses.” The statement also called on the Prime Minister to “protect public and private property, and enforce the law.” 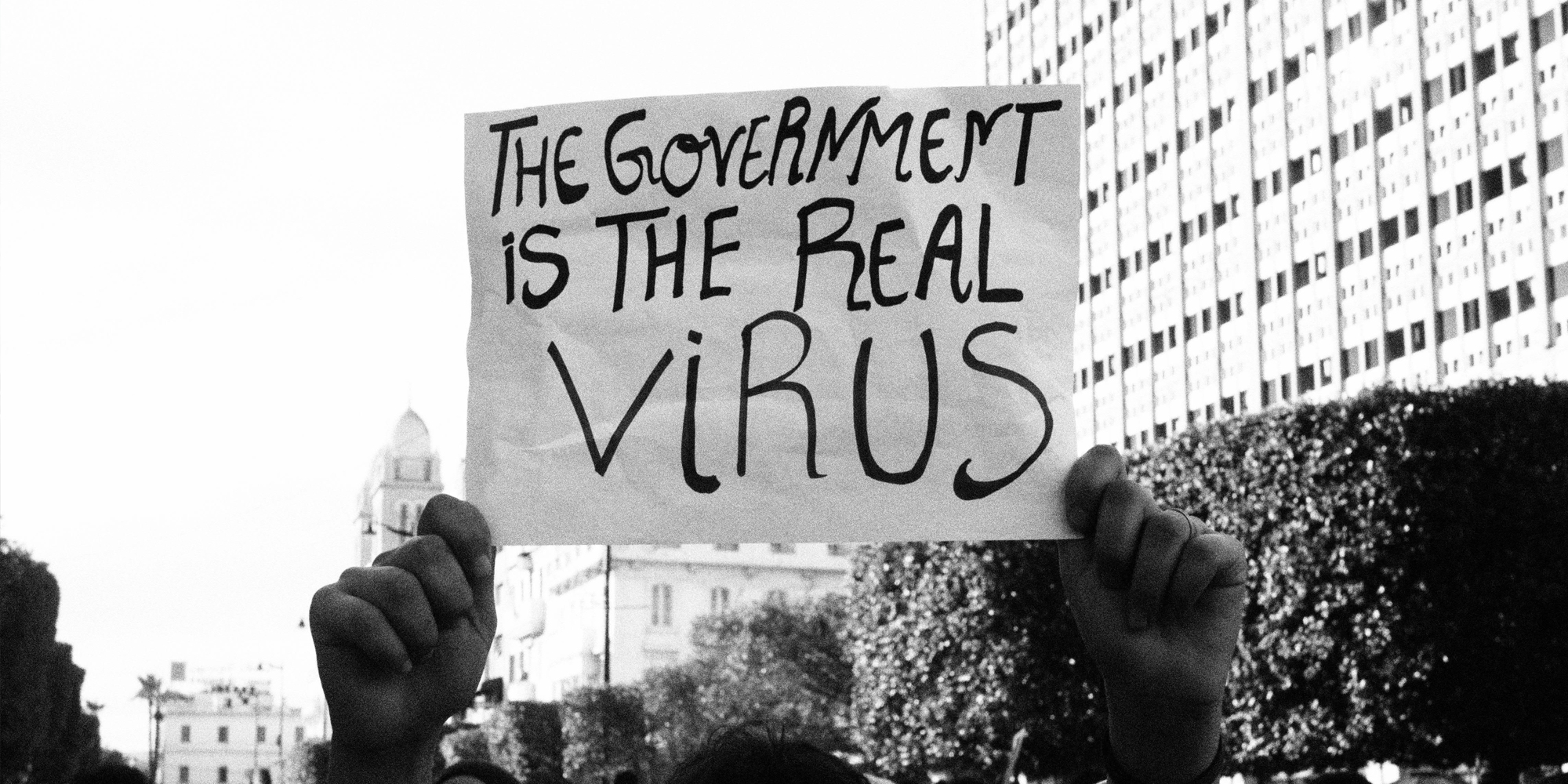 Nawaat/Meshkal asked Gaaloul how Ennahdha could support the release of detainees, some of whom have been tortured in detention centers, at the same time that they took a pro law enforcement position on the demonstrations.

“We are in a tricky position, that’s why we are failing somewhere. The problem is that we need to change that practice within our security system. We must not tolerate those actions…those ones are victims of the system, and now we are representing the system. If they are our victims we need to be the solution for them,” Gaaloul said.

Gaaloul said that the history of Ennahdha being victims of torture puts a responsibility on the party to stand against it now that they are in power.

“We were on the other side a few years ago and we cannot allow ourselves once we are on this side to tolerate the same practices. We need to really be vigilant with that, otherwise we will be politically corrupt,” Gaaloul said, adding that he supported calls to prosecute police accused of torture.

The National Union of Tunisian Journalists (SNJT by its French acronym) documented what it said were physical and verbal attacks on tens of journalists covering the February 27 Ennahdha demonstration.

“The Union holds the Ennahdha movement responsible…for the assaults and classifies the silence of its leaders as clear collusion and encouragement of them,” a statement shared by the SNJT on Facebook on February 28 said.

Freelance photojournalist Islam Hakiri told Meshkal that he saw his colleague, Mohamed Tata, being physically attacked by demonstrators. When Hakiri tried to pull Tata away, Hakiri himself was slapped and kicked, and he claimed Ennahdha supporters tried to break his equipment in the process.

This happened as [former Minister and Ennahdha member] Abdelkarim Harouni was watching. I called to him saying we were journalists…He smiled and looked away as if he did not see us… when I later asked him why he did that, he denied and said he does not know me and he saw nothing,
Hakiri told Meshkal.

Following the SNJT statement about violence against protesters, the Ennahdha Executive Bureau released a statement that it “commends the efforts of journalists in covering the march, and regrets any transgression that may have occurred to some of them as a result of crowded conditions or isolated individual actions.” 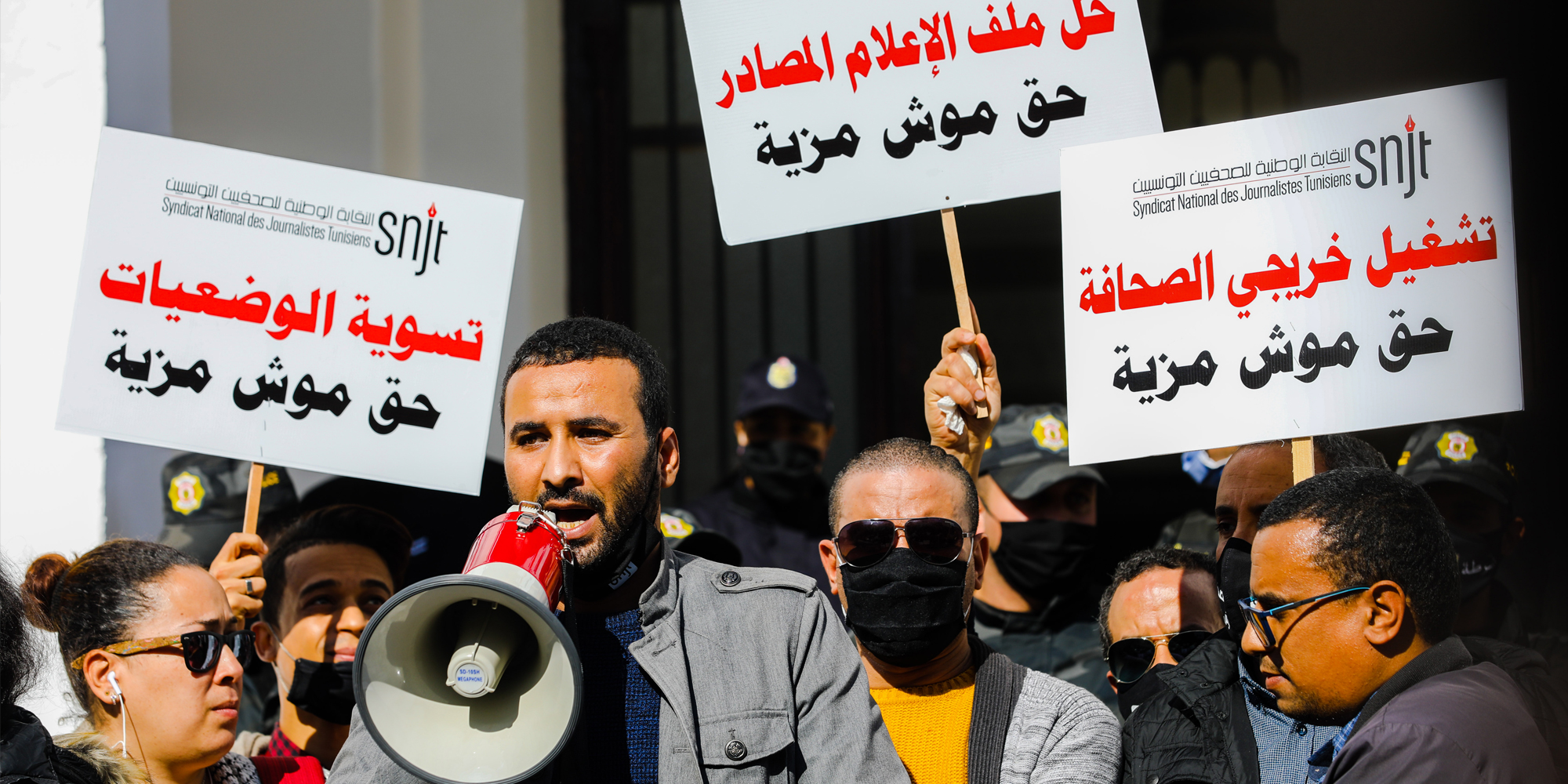 “We do apologize with any unaccepted behaviors of people who were there in our event and who might have aggressed journalists,” Gaaloul said.

At the Ennahdha Party headquarters where Meshkal interviewed Gaaloul on March 4 was a copy of the newspaper Array Alam from February 4, 2021 with the top headline reading: “Danger: Media Inciting Against Security Forces and Describing them as Daech.” Meshkal asked if this sort of discourse targeting media might be behind some of the violence against journalists at Ennahdha’s February 27 demonstration.

“That is part of the problem, yes,” Gaaloul said. “Media is expressing the civil war with words…part of the conflict. We need to free it from these sectarian partitions. We need free journalists. And the problem is, part of it, is journalists how much do they earn? When he gets someone who will secure his bread, he will express his views.”

While there has been well-documented, extensive use of police violence against demonstrators, bystanders and people in their homes in poor neighborhoods in recent weeks, the PDL has also alleged that police used violence to disperse a protest they staged at night on March 9 against the International Union of Muslim Scholars. PDL leader Abir Moussi has since posted emotional videos of herself visiting people the party claims were hurt during the dispersal. The PDL has shared footage of the event on their official Facebook pages.