According to the minutes of the agreement published by the UGTT on its Facebook page, thirty-one thousand ‘site workers’ younger than 45 will be eligible to become public employees by the year 2025.  Workers aged between 45 and 55 will be given twenty-thousand dinars as a form of retirement pay in March 2021 and continue to receive social benefits such as healthcare. 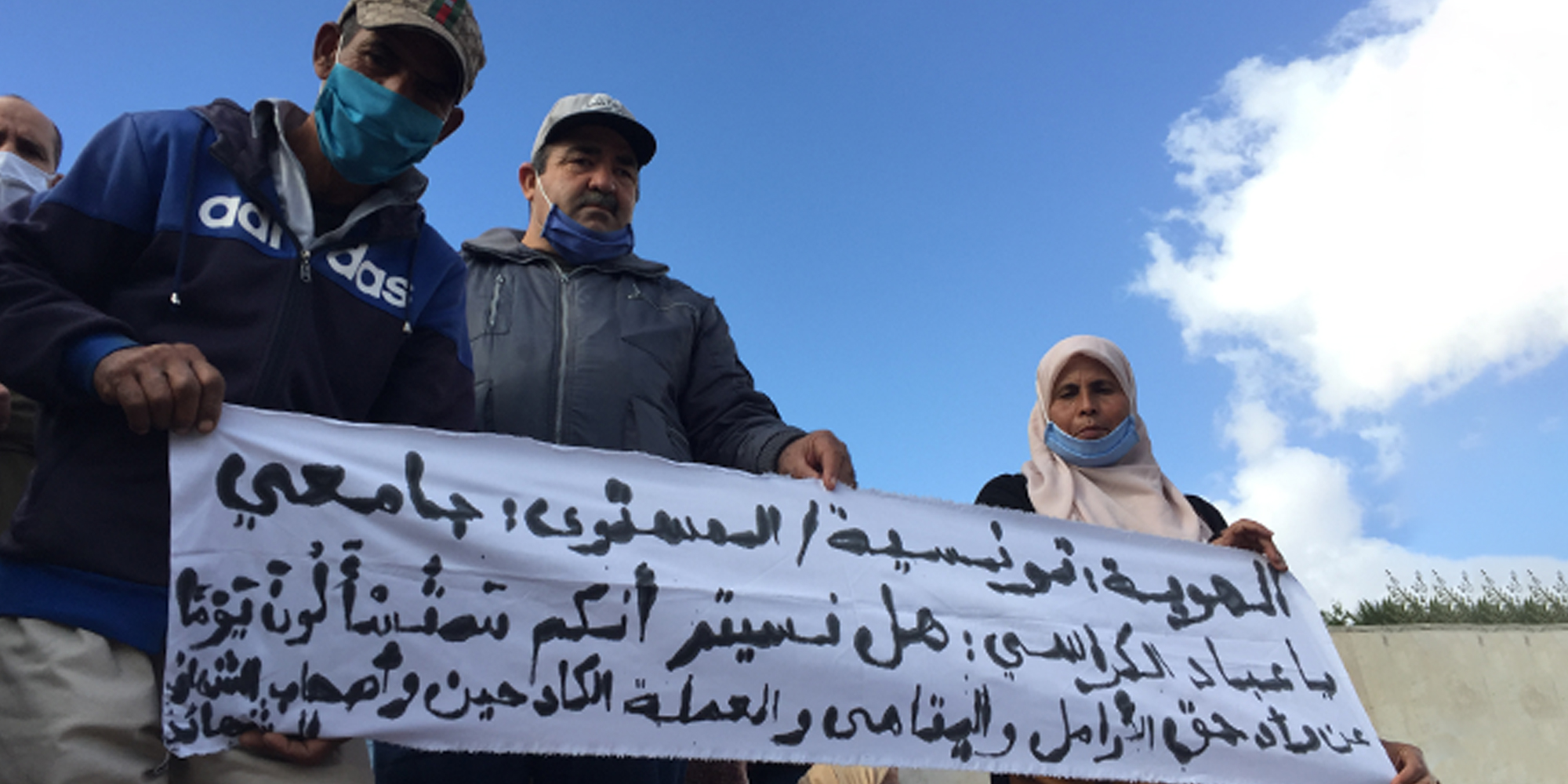 “Achieving this agreement for a large section of site workers after years of working in precarious conditions meets the commitments of the government, breaking with the practice of precarious work,” said Prime Minister Hichem Mechichi, according to a statement released by the Prime Ministry on its official Facebook page.

But a coalition movement of ‘site workers’ that calls itself the “Collective of the Regional Coordination Bodies for Site Workers” says that the government must hire them all, without exception, and their wages must be calculated based on the number of years they have worked for the country.

“I Was Hired by the State to be a Precarious Worker”

Introduced by the ‘urban and agriculture work program’ in 1996, the legal category of ‘site workers’first appeared in 2002 with law 32-2002 relating to the social security system for workers in the agricultural and non-agricultural sectors.The law stipulates that the workers are to be registered with the National Social Security Fund (CNSS), which was established to serve private sector employees. As such, they were hired directly by the state and local institutions for public services but were not recognized as public employees.

Although this specific category of workers was employed by public institutions,‘site workers’ say their working conditions in practice did not differ from other forms of precarious informal work. They received less than minimum wage and no basic social security or employment benefits, despite the law stipulating such benefits. Moreover, they were given no written contract of employment.

Decent jobs were one of the key demands of the 2011 uprising, and successive governments have promised to address precarious work and job insecurities. So-called ‘site work’ appears to have served as an ad hoc way of managing persistently high unemployment. Thousands of Tunisians were newly hired by the post-2011 regime without contracts. 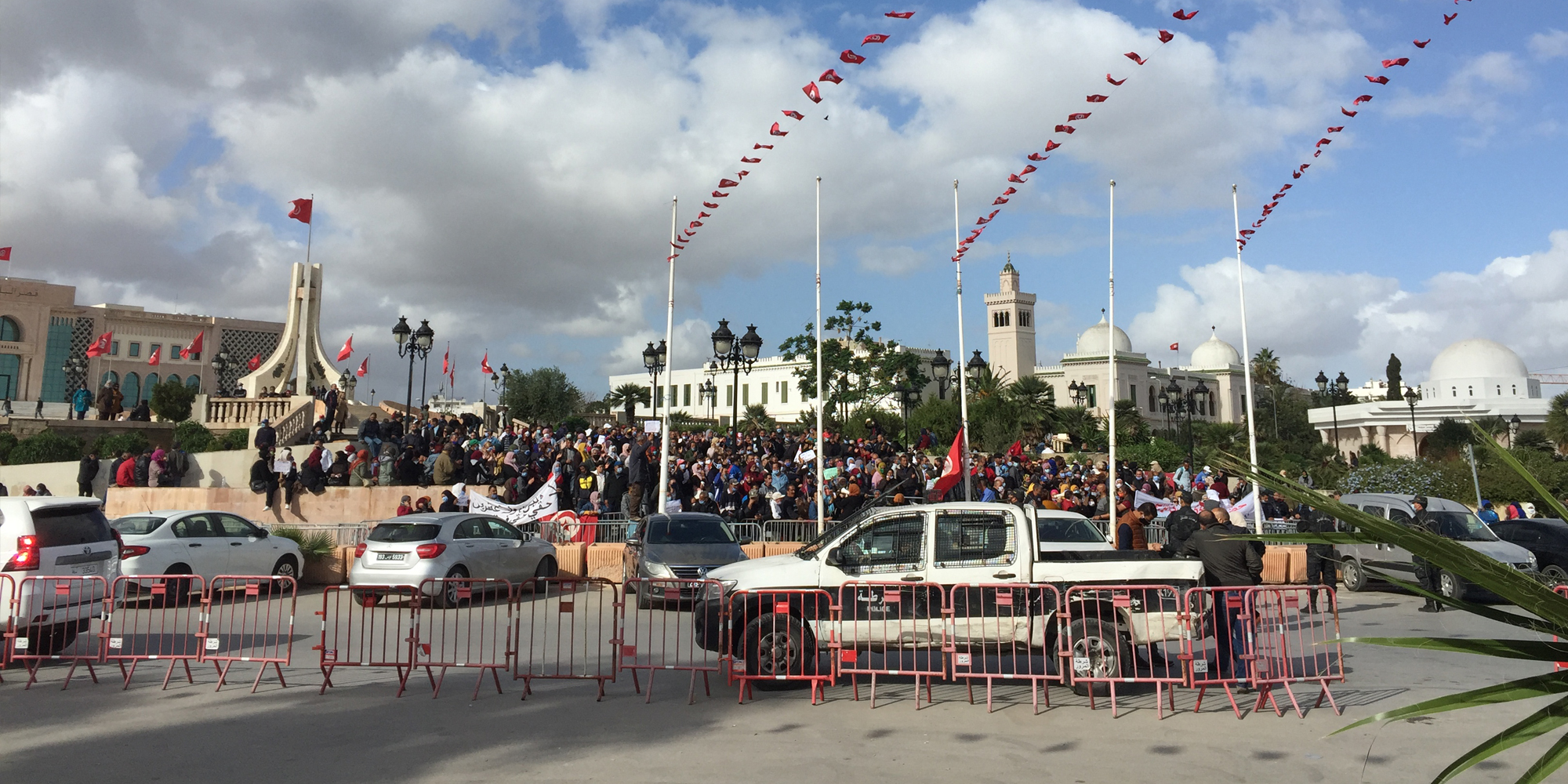 But Jamel Zammouri, who has been working as a ‘site worker’ for the Ministry of Justice as an assistant at a district court in Medenine for more than ten years, believes that despite some hiring, no meaningful efforts were taken to improve the poor working conditions of the majority of Tunisians.

Things did not change after 2011. We went to the street to demand our right to a decent job. The interim government that came after the revolution tried to absorb as many unemployed as possible, as quickly as possible. And this precarious work was what we were given.

Mohamed Akremi is one of many Tunisians who became ‘site workers’ after the uprising, working on administrative tasks for the Ministry of Education’s regional office in Medenine.

The Medenine municipality called me to join this work program. They promised me that I will be hired as public employee once I work for four years, and I ended up working as site worker for nearly eleven years. I had to have two additional part-time jobs because they paid me less than minimum wage. I was supposed to receive 352 dinars in the year 2011, but they paid me 250 dinars only. My monthly salary remained 250 dinars until 2016. I was hired by the state to be a precarious worker,

The ‘site workers’ hired by the state have regularly taken to the street since 2014, demanding the government respect their legally guaranteed rights. Their unofficial organizing as union workers began at municipal levels, coalesced into separate regional groupings by 2014, and finally coalesced into a unified, national labor movement in 2016.

Like the many protests organized by unemployed people asking for jobs, protests by ‘site workers’ appear to have attracted little response from officials, who have largely ignored the protesters’collective actions and often framed them as non-patriotic acts or even a threat to national security, the economy, and democracy.

Zammouri thinks that socioeconomically marginalized groups like ‘site workers’ lack the material and symbolic resources needed to attract public and media attention. “One of the key difficulties in organizing our collective actions was that we didn’t have enough financial resources to make the movement sustainable and successful,” he told Meshkal/Nawaat. 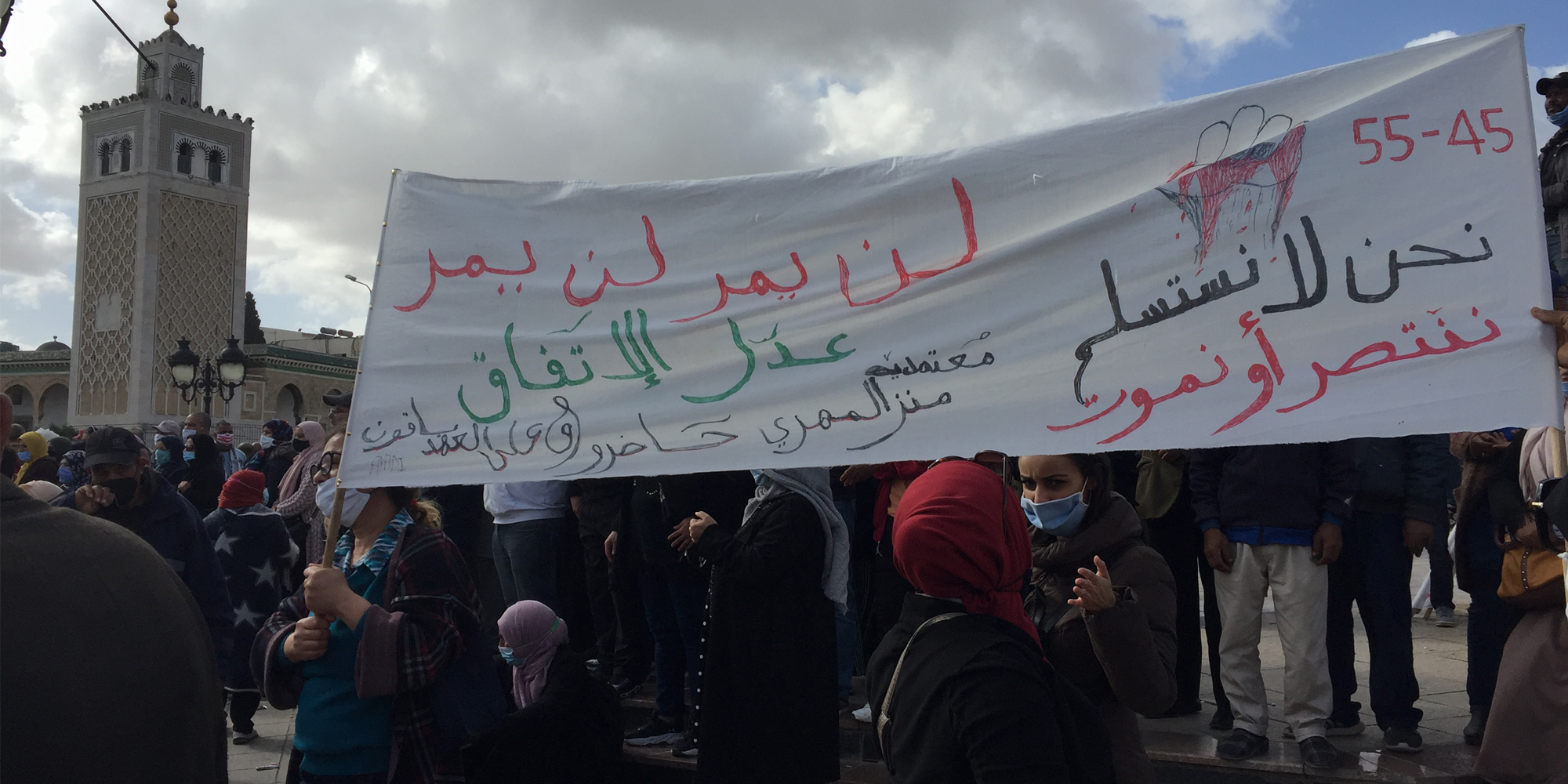 The State began to pay the workers more after their collective actions evolved into a national movement in 2016, but they were still paid less than minimum wage according to Akremi. The UGTT’s intervention in the issue also started the same year.

Baraa Baroua, a ‘site worker’ at Ministry of Youth and Sports youth center in Gabes and a divorced mother with three daughters, joined the national movement because she believed that “the government would not move unless I protest against the injustice I went through for years.”

It was our continued protests that pushed the government to implement what’s written in the laws, though only partially,

It took another four years of protests and strikes-sometimes on a monthly basis-before the government and the UGTT finally reached an agreement in October 2020. The two stakeholders consider the agreement a successful deal. Noureddine Taboubi, UGTT General Secretary, described it as a “step forward in the path of partnership between the government and the union.”

The October Agreement, a Success?

The agreement, however, has drawn criticism from many ‘site workers’ because it excludes those aged between 45 and 55 from the category of beneficiaries. From the government’s viewpoint, the age limit set in the agreement with the UGTT was made in accordance with the decree law 1031 of 2006 which stipulates the upper age limit (40) for the employment of public servants. According to this law, an exception is made for those who are older than 40 but registered themselves as job seekers when they were younger than 40. In all cases, the maximum age of the candidate for public sector employment must not exceed the age of 45.

Some ‘site workers’ believe the deal’s age limit is designed to force a large segment of them to retire. The October agreement did not address the fact that these workers were hired directly by and worked for the state and public institutions for at least seven years (given the fact that, according to Akremi, there was no new recruitment made after 2013), and yet they were left out from the public employment system. It is worth noting that Tunisian law stipulates that even private sector companies must provide permanent employment for those who worked for more than four years at the same companies, although there are well-documented loopholes that many private employers use to avoid this.

I didn’t know until 2015 that we were categorized as if we were private sector workers and the promise to offer me a permanent job was made according to the private sector employment law, which doesn’t make sense at all. We have been working as hard as other public employees, if not harder than them,

Zammouri also noted that “it is wrong to recognize our job as part of private sectors. There’s no ministry in this country that doesn’t rely on our labor. We are asked to work to serve public institutions, even in the time of COVID-19.”

Romdhane Ben Amor, the head of communication for the Tunisian Forum for Economic and Social Rights (FTDES), believes that the ‘site worker’ issue is complicated because they were made to belong to neither the public nor private sectors. The ambiguity of their legal status can easily serve as the justification to disregard their prior work experience.

The government frames these workers as if they are new candidates for the employment in the public sector,

Article 40 of the 2014 constitution stipulates that all citizens have the right to decent working conditions and a fair wage. The State, together with the UGTT, the Tunisian Union of Industry, Trade and Handicrafts (UTICA) and the International Labor Organization (ILO), also signed an agreement for the implementation of the Decent Work Country Program for 2017-2022, an ILO framework for its projects in different countries. However, the continuous socioeconomic protests organized by unemployed and precarious workers indicates that the State is notgiving workers the value that they believe they deserve.

Akremi is concerned that the State may not implement the agreement using the excuse of its vulnerable position vis-à-vis external creditors, particularly the International Monetary Fund (IMF) which has pushed Tunisia to reduce the size of the public sector. In addition, Akremi pointed to a divide-and-conquer tactic, claiming that “the government is trying to weaken the workers’ movement by accepting some while excluding others.”

It is not going to be easy to realize the October agreement, let alone the workers’ actual demands. The problem boils down to the lack of political will to address the issue. The government will do nothing unless there’s ongoing social pressure. It has been always like this when it comes to the demands of the socioeconomically marginalized group,