Every day, Tunisia sees hundreds of new Covid infections. Among them, over 700 have been hospitalized and 149 admitted to intensive care, according to numbers published by the Ministry of Health on October 14. As the Coronavirus spreads quickly, the capacity of hospitals has become a major concern. A video taken at the Rabta Hospital emergency room which shows patients lying on makeshift mattresses on the ground prompted an uproar on social media. It revealed the overload that hospitals face, raising the question of their capacity to deal with this health crisis. 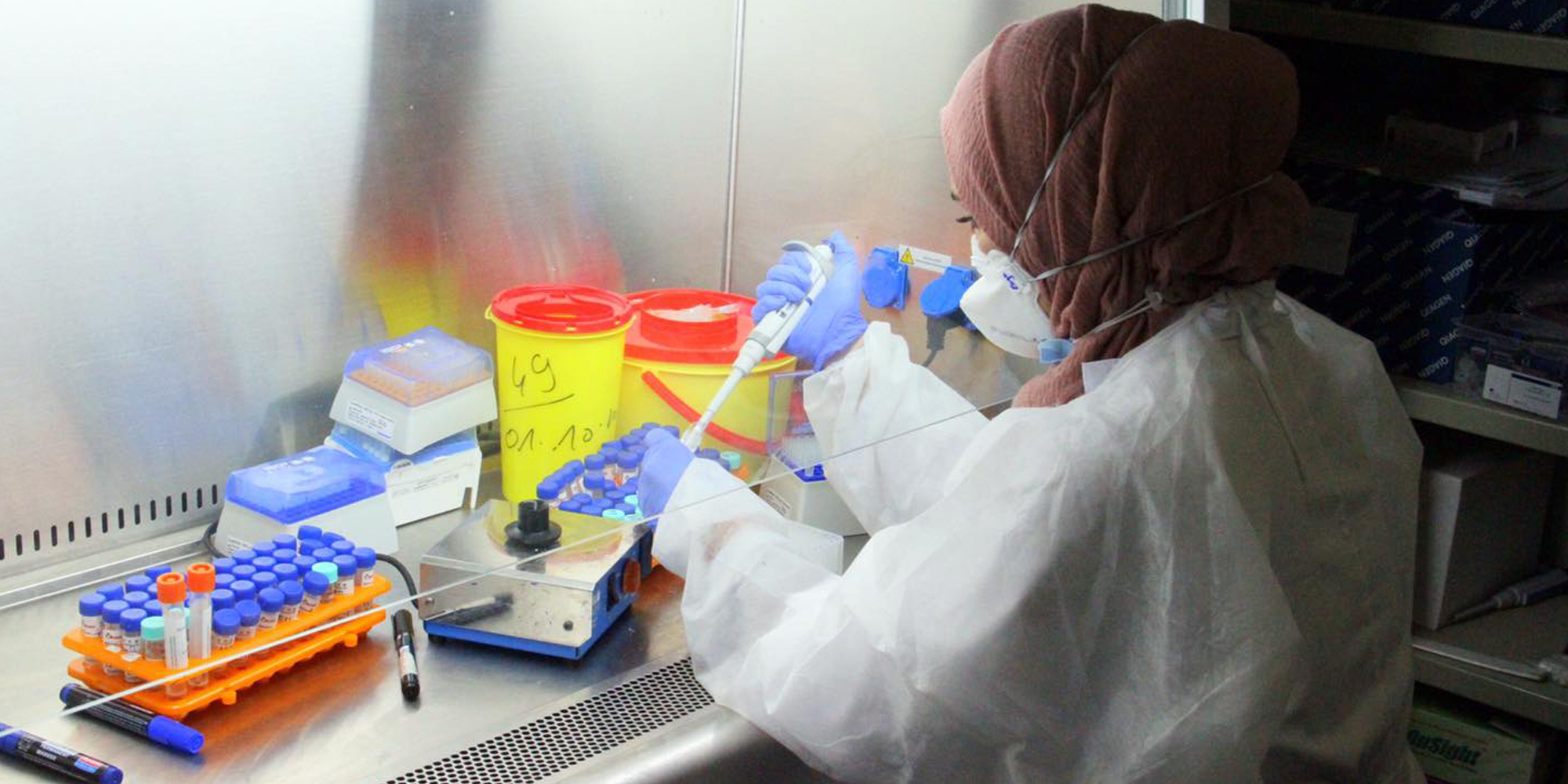 At the Charles Nicolle Hospital in Tunis, October 2020. Photo credit: Ministry of Health

Managing the flow of patients infected with Coronavirus begins as soon as they arrive at hospital facilities, where patients are separated according to their symptoms and sent to a ward dedicated to Covid-19. The ward is supposed to isolate these patients from individuals suffering from other illnesses. At the Taher Maamouriuniversity hospital in Nabeul, however, the emergency room is overwhelmed by the influx.

« Those infected with Covid-19 have contact with the other patients before they are directed to the areas designated for Covid-19. This mishmash of patients presents a danger for everyone who arrives at the ER but also for medical staff », complained Anas, a resident doctor at the hospital.

According to Bilel Guesmi, president of the National Union of Tunisian Nurses, the absence of a system for separating Covid-19 patients early is a problem affecting the majority of health institutions. « This reveals there was no prior planning in hospitals in order to manage the health crisis », he told Nawaat. « In addition to the absence of a Covid-19 separation system, triage of patients is today being done by a simple temperature test and not by a questionnaire determining the clinical state of the patient, as should be the case ».

In the midst of this mingling between Covid-19 patients and other patients in emergency rooms, medical and paramedical personnel are managing the crisis with whateverfewresources are at hand. « The amount of disinfectant gel and masks is not always enough, even though sometimes I buy them with my own money », said Sana (pseudonym), an assistant nurse who works in the emergency room at the Nabeul regional hospital. 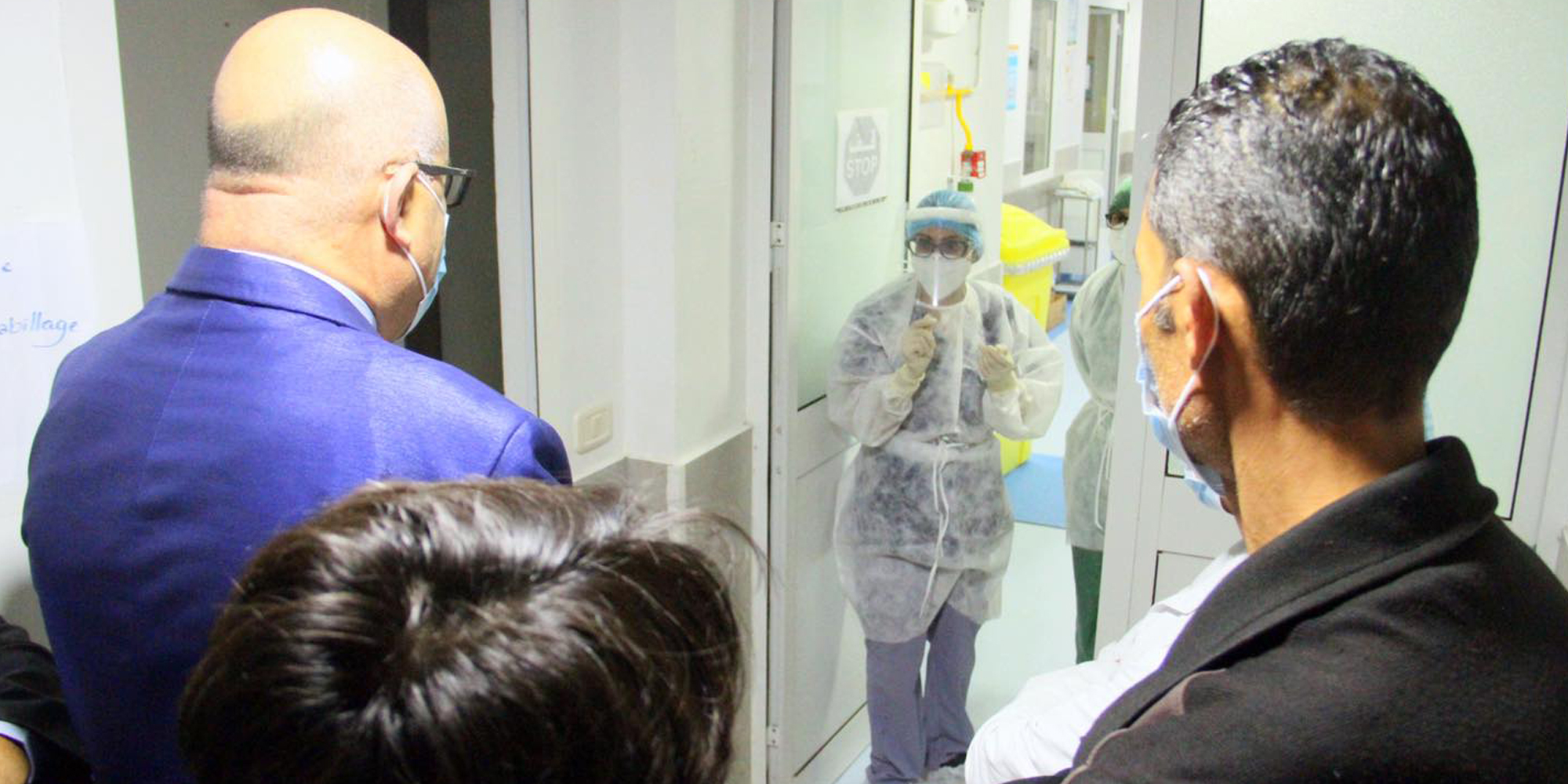 A Shortage of Protective Equipment

It’s the same story for Sonia, a nurse at the hospital. « We don’t have much protective equipment. Plus, the majority of it was purchased thanks to donations », she said. For Bilel Guesmi, the availability of protective equipment for medical and paramedical personnel differs from one institution to another and depends on how a department head manages the work. « Some department heads are more demanding than others. Some demand protective gear from the hospital’s pharmacy, while others are only concerned about continuity of the department », he said.

He noted that the Mongi Ben Hamida National Institute of Neurology where he works has 24 available beds, only eight of which are equipped with oxygen. The situation is even more alarming in the country’s interior regions. « There are hospital facilities that don’t have a central installation for oxygen supply. This means that if the clinical state of the Covid-infected patient deteriorates, nurses are unable to do anything ». he said.

Still, beds must be found patients. In some hospital facilities, there are no more vacant beds. « Everyday, ambulances carrying Covid-19 patients in respiratory distress drive around in circles looking for beds », Guesmi told Nawaat. 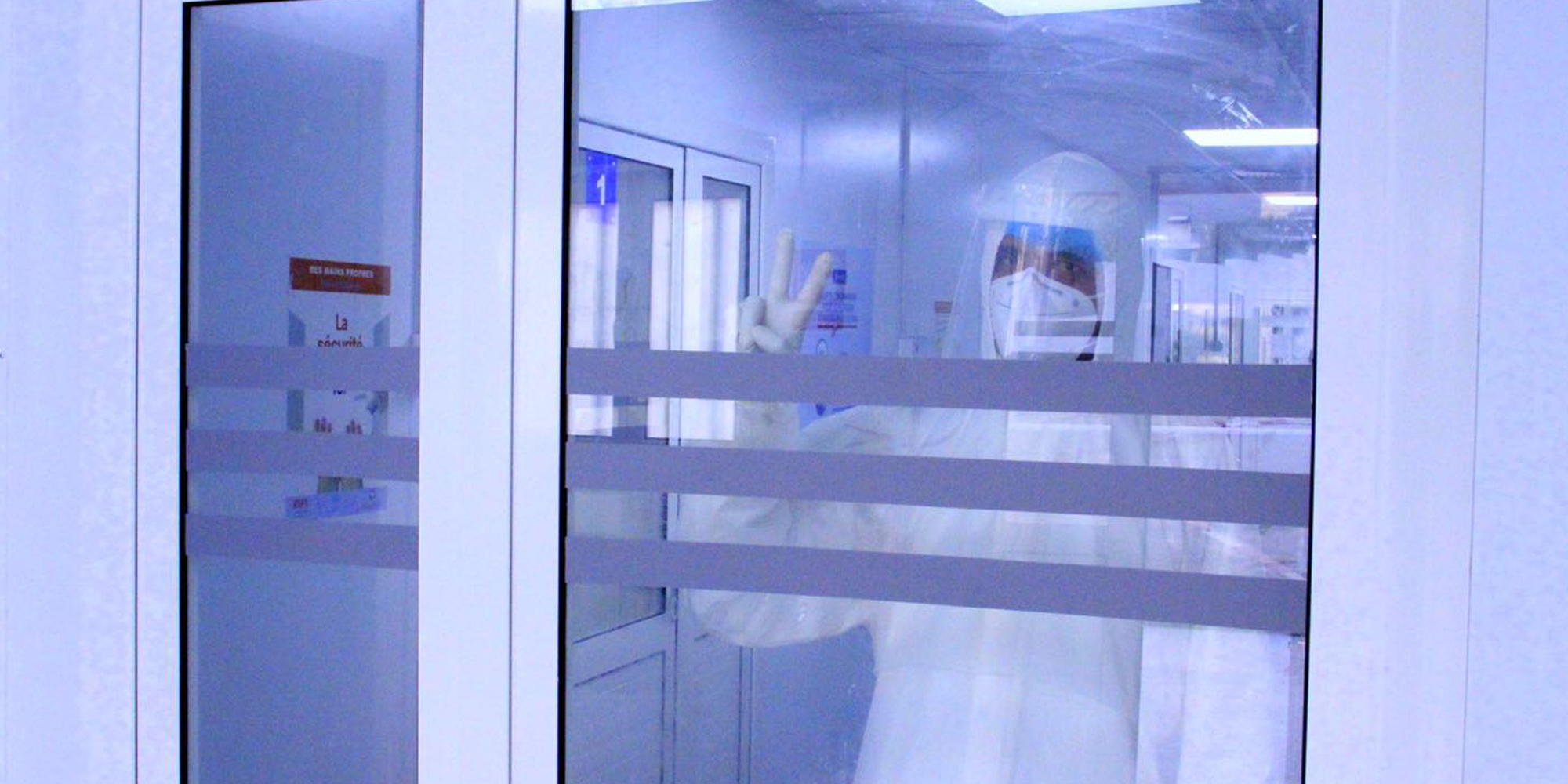 Slim Ben Salah, President of the National Medical Council CNOM, agreed, noting « the dilapidated state of hospital facilities that has been exposed by the Covid-19 crisis ». He added that « hospitals that are already bankrupt do not have the means to face an epidemic of this magnitude ».

The lack of equipment is exacerbated by the lack of medical and paramedical personnel. Slim (pseudonym) is a nurse who works with Covid-19 patients at the Taher Maamouri university Hospital. He covers the night shift every other day. The on-call team for the dozen or so patients currently hospitalized includes a doctor, a nurse and one health worker. « For the moment, we can manage this number of patients, but it is clear that this will no longer be the case if the number of patients increases », he warned.

To compensate for the lack of medical and paramedical personnel, the Ministry of Health decided to recruit workers on fixed-term [short-term] contracts. « In order to deal with Covid-19, young nurses were recruited for three months. These nurses are inexperienced, and despite this they were pushed to the front line to manage the crisis », said Bilel Guesmi, adding that many of them have not yet been paid.

The same issue is true for doctors. Some of them were also recruited temporarily to help combat the virus, but the majority have not received payments, said Ben Salah. « It is not enough to announce the rolling out of 1200 oxygen beds; you really also have to find the medical and paramedical personnel to operate them » said Ben Salah.

For his part, Bilel Guesmi of the nurses’ union, admitted that this phenomenon exists, but points out that « it’s true that certain paramedical personnel did not want to work with Covid patients, especially during the first wave in March. But today, they’ve come to better understand the illness and are less afraid ,» he said.« Some have a chronic illness or a family member who is ill. In spite of everything, they were called upon to work at the risk of being exposed to danger ». 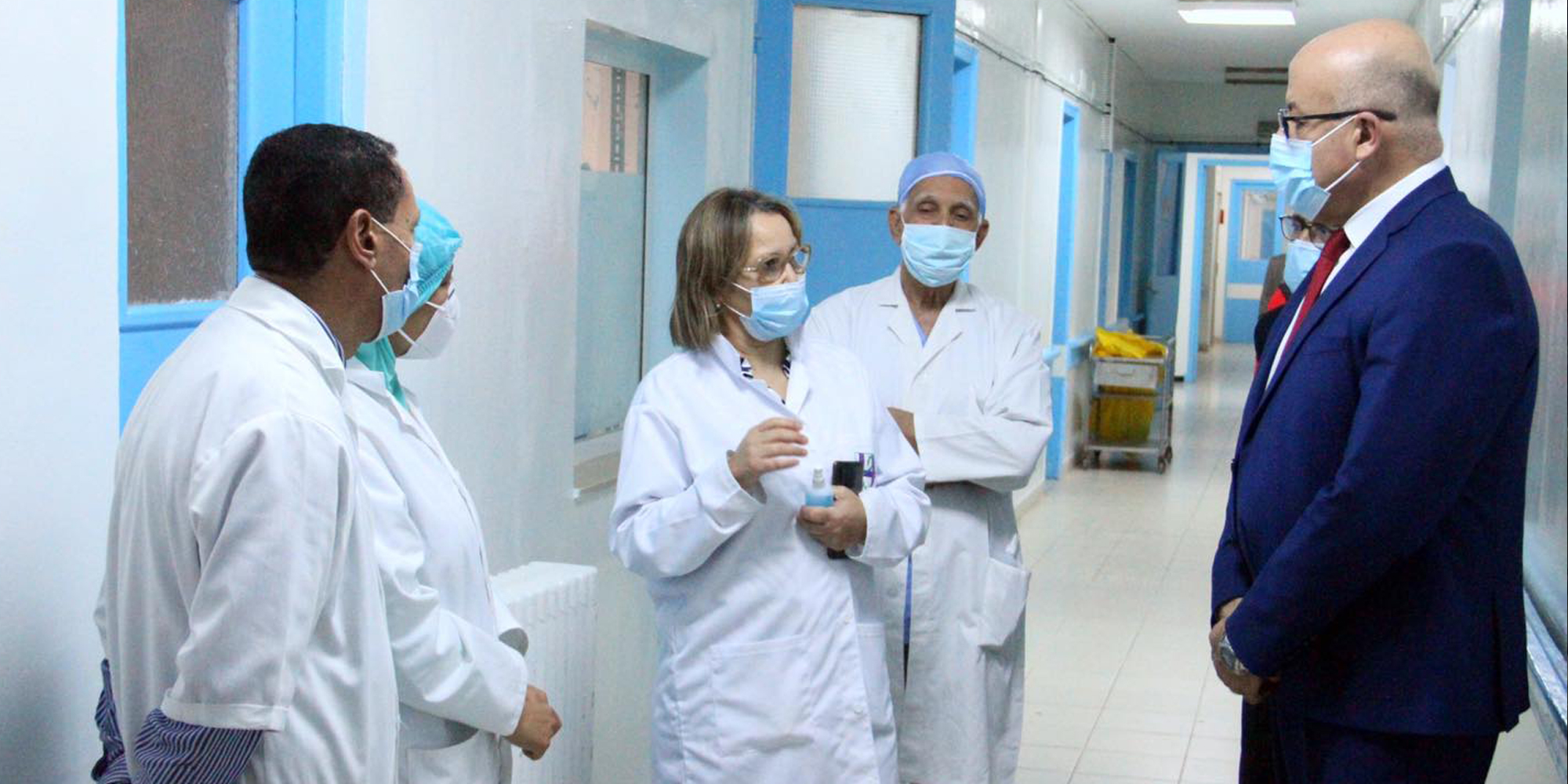 Sana the assistant nurse who suffers from a chronic illness, said that the department head at the hospital gave an order to restrict the leave time granted to nursing staff. According to Ben Salah, there was also a call for the mobilization of all medical and paramedical personnel at Taher Maamouri Hospital. « With the rotation system in place, all medical staff will have their turn caring for patients infected with the virus », he added.

Whereas during the first wave medical staff were required to confine for 14 days after working in the Covid-19 unit, now they are expected to return home. « For us, it’s an extra source of stress. We are especially afraid for our families », said Sonia, the nurse.

In order to reassure medical and paramedical personnel, Prime Minister Hichem Mechichi’s government announced on October 3 the recognition of Covid-19 as an occupational disease. For both Ben Salah and Guesmi, the announcement has not been followed by concrete measures. « Since March, we have called for the implementation of this provision to protect in particular doctors recruited on a temporary basis and who, in case of infection, must at the very least receive free care or an annuity for family in the case of their death. This announcement came late and will be still further delayed in light of the paperwork required for its application, » said Ben Salah.

In light of this, he pointed to the three doctors who have died from the Covid-19, about a dozen who are currently hospitalized, and the hundreds of medical and paramedical personnel who have been infected by the virus.