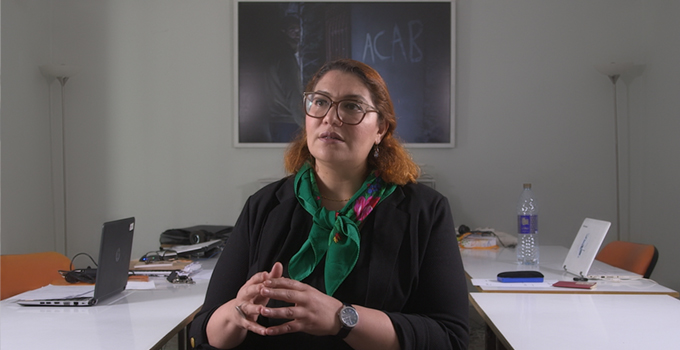 Nawaat: Have your support centers been able to provide an estimate regarding the rate of marital violence against women?

Yosra Frawes: Our support centers report a one-third increase in marital violence in comparison with the pre-confinement rate. This increase is similar to what we observe in general during weekends and vacations. We expected this sort of phenomenon because we know that there is a spike in violence when couples spend long periods of time together under the same roof.

What forms of marital violence are the most common?

Physical violence is always the final stage of a long chain beginning with moral violence and progressing to verbal violence. This is followed by the partner’s redemption, and then it all repeats. It’s a cycle in fact. During the present period, many women report feeling that they are suffocating as a result of the physical proximity with their husbands who is watching their every move. The presence of children who require all-day care is also a source of tension for the couple.

What kind of support do you offer battered women?

Our strategy involves first getting the message out to women that they can report violence to our support centers by phone. We listen to victims to evaluate whatever needs they express. We offer psychological support. If there is a request for legal support, the center puts the victim in touch with one of our activist lawyers who provides legal help, informing her about her rights and services available to her. Next, the case goes to a multidisciplinary commission called the Violence Commission at the ATFD. This body evaluates the case for potential institutional intervention or media coverage if the victim expresses the need to make her case known. If necessary, our activist lawyers can also accompany certain victims who aren’t prepared to file their complaints with the special units in charge of violence against women.

What obstacles do you face in providing assistance to battered women?

The 128 special units are operational, but unfortunately operate according to the same rhythm they did before confinement, from monday to friday until 4pm. This means they miss the times when there is a spike in violence. When women are subjected to violence during the weekend, they must take their complaints to ordinary police stations. Many have reported that police officers treated them rather aggressively, discouraging them to file their complaint or categorically refusing to receive their complaint under the pretext that it wasn’t their priority.

The other big problem is that the courts are working the bare minimum right now. The special units transfer the case to the public prosecutor who is already over his head with other issues.

The special units have discretionary power to evaluate the severity of a case. They make a request to the prosecutor for emergency measures to be taken when they judge a certain case to be serious. There are four possible emergency measures: first, the victim is ensured a hospital visit for an examination. However, hospitals now are following restrictive measures for accepting patients. The second measure is an on-site visit to assess a serious offense. However, these special units generally lack the means for on-site visits. Some agents are obligated to make visits using their own cars. The units can ask the prosecutor to grant them a restraining order against the aggressor, however the prosecutor is not generally inclined to grant such a measure during a period of confinement since the aggressor, who is forced to leave the couple’s home, must be dealt with. The fourth possible measure is placement of the victim in a shelter. All existing centers, however, whether state-run or set up by civil society, are full. With preventative measures in place against Covid-19, the centers are also wary of receiving new women. As a result, the four emergency measures are nearly impossible to implement in a context of confinement.

The law stipulates recourse to the Family Court who can issue a protection order in favor of the victim. But here also, the Family Court is not operational during the present period. The only solution in this context is for the victim to file a complaint and wait for the courts to reopen, an indication of the justice system’s failure to provide assistance to victims of violence during this period.

The Ministry of Women created the toll-free number 1809 operated by 11 pro bono psychologists to help victims. What do you think of this measure?

Regarding the toll-free number, better late than never. We have always asked that this number be operational seven days a week. Before, they worked until 2pm and there weren’t enough operators. The former Minister of Women Naziha Laabidi solicited associations for individuals who would be paid by the ministry to respond to calls. The current minister was proactive in quickly getting the number going. But this is just one small measure; we need a global strategy that targets the individuals most vulnerable during this period. Women are in a precarious situation: they have less access to credit, social security, etc. Only 27% of the active population are women. Many women don’t have access to water, etc.

What does the increase in violence against women reveal?

What worries us the most is that this period reinforces all aspects of patriarchy. We are reverting back to a vertical hierarchy in the private space. On social media we see women cooking, disinfecting and taking care of children. At the same time, women have disappeared from the public space. The media only solicit women’s expertise for medical issues and never for their opinions on economic or constitutional questions.

Other worrying indicators are the messages we find on social media: some have expressed enthusiasm that the courts have closed so that men can beat their wives in total impunity. Others use a sarcastic tone to normalize the objectification and sexualization of women. We see this in jokes about women’s bodily changes after confinement or about the fact that a man who cooks or cleans the house is comparable to a woman. This diffuses an image of women that is traditional or based on sexual fantasy. We were also shocked by hateful messages spread by some people like Nermine Sfar. All of this requires a feminist reflection about the world as it faces Covid-19.