As a disclaimer, I’m not an epidemiologist and not even remotely connected to the medical field. My observations below are based on collecting public data and applying them to the specific context in Tunisia, and using some of my training as a data scientist and predictive modeler. Below I’ve provided graphics, data, and alternative models in response to some pressing questions:

My aim here is to assess whether all the hype regarding the Coronavirus is justified, or if it has been sensationalized. Unfortunately, what you will most likely conclude is that:

1- What is the likely true number of cases in Tunisia? 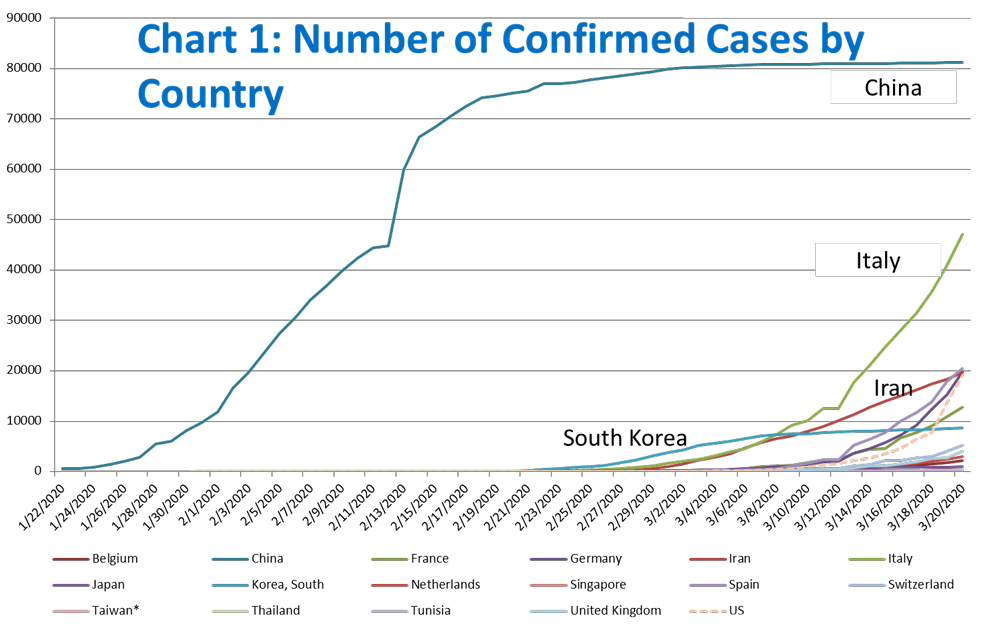 Since the initial diagnosed case in Wuhan, China on December 1, 2019, the total number of cases grew exponentially until China contained it by enforcing a very aggressive lockdown. Outside China, the virus was very slow to appear initially, until the end of February 2020. However, given the lack of public awareness and immediate action, the situation spiraled out of control very quickly in less than three weeks, as the number of confirmed new cases almost doubled, and governments around the world were very tentative in their confinement and containment strategies. Unfortunately, COVID-19 is now a pandemic with no near end in sight. China and most other Asian countries are now reporting low diffusion of the virus, whereas Europe (Italy, France, Germany, and Spain leading the way) and increasingly the US are becoming the epicenter of the virus. 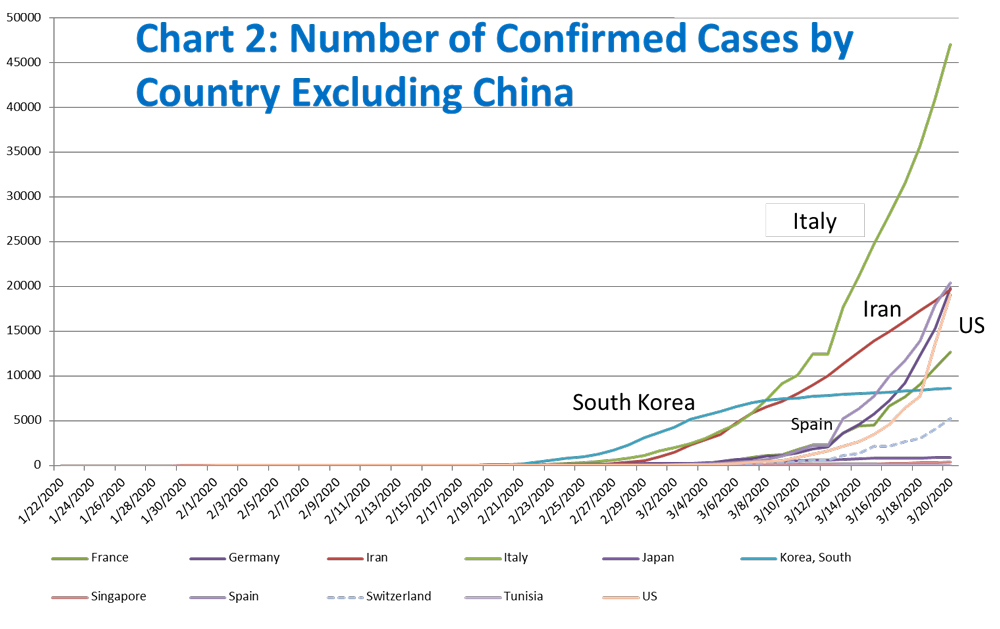 Coming back to Tunisia, the situation may not seem critical now, but we cannot ignore the recent historical data on the spread of COVID-19. On March 20, 2020, the number of cases in Tunisia surpassed the seemingly benign threshold of 50 confirmed cases, and on March 18, 2020 the first death due to COVID-19 was reported. As I will show later, this number is much more worrying than it seems.

Chart 3 shows the evolution of confirmed cases since they numbered 50. It is clear that 50 represents a critical thresholds beyond which the daily growth of number of cases nearly doubles. It is thus fair to say that the number of confirmed cases is likely to grow in two weeks to as much to 6,000 if we look at comparable examples such as Italy, France, and Germany.

The only countries that seem to have very successfully contained the virus since exceeding the 50-case threshold are Singapore,South Korea and a few other Asian countries. This was achieved by very exhaustive and decisive containment policies early on.

Conversely, there are very good reasons to be concerned with the delayed response in Tunisia. For instance, flights to and from high risk areas such as France, Italy, and Spain were not suspended until very recently. Similarly, there are numerous reported violations of the self-quarantine period and of rules for Tunisians and foreigners entering Tunisia. Lastly, some of the basic tools and equipment needed to slow down the spread (such as face masks and hand sanitizer) are not available. 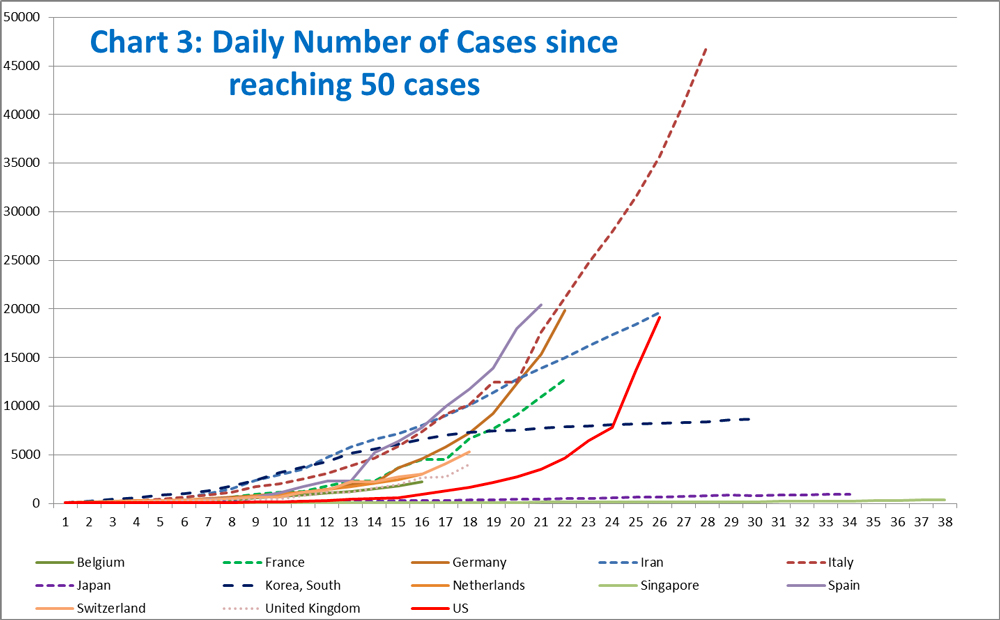 Understanding the nature of the spread of the Virus – Study of the timeline of events in Hubei, China 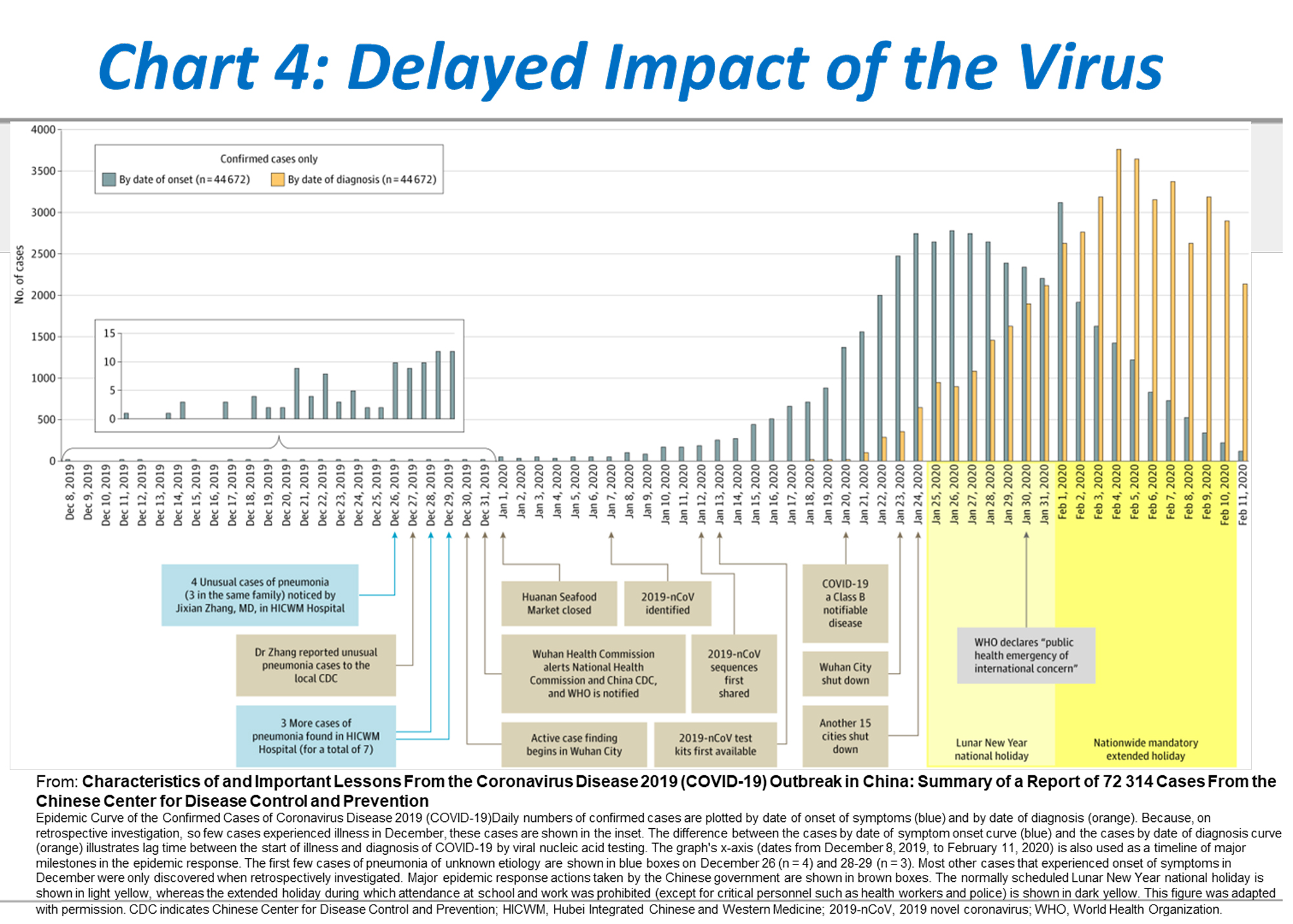 Chart 4 is especially important to understanding the gravity of the situation. The orange bars show the daily official number of cases in the Hubei province: how many people were diagnosed that day. The grey bars show the actual daily coronavirus cases. The Chinese CDC found these by asking patients during the diagnostic when their symptoms started. It is important to note that these actual cases weren’t known at the time, but were determined later on. Authorities do not determine whether a person has the virus when their symptoms begin, but rather when that person goes to the doctor and is diagnosed.

What this means is that the orange bars show you what is officially reported, while the grey bars show a best guess.

Coming back to the example of Tunisia, this means that the 57 cases reported as of March 20, 2020 started to show symptoms roughly 12 days earlier; according to this information, we have reached the 50-case threshold, and the number of actual cases has probably grown exponentially since, although these cases are yet to be reported. These were the number of tests carried out in different countries by March 9, according to Worldometer.

A couple of things stand out: (1) Even with expanded testing, Tunisia lags considerably compared to other countries in terms on testing rates (measured here by number of tests administered by million people; and (2) As Chart 5 shows, there is a negative correlation between positive test rates and the number of tests administered by million people, which suggests that countries with fewer tests per inhabitant are only testing patients with the most severe symptoms, and therefore artificially lowering the actual number of cases. There is concrete evidence for this in the US for instance. As testing in the New York area has expanded over the )past four days, the number of confirmed COVID-19 cases has jumped by over 5,000. 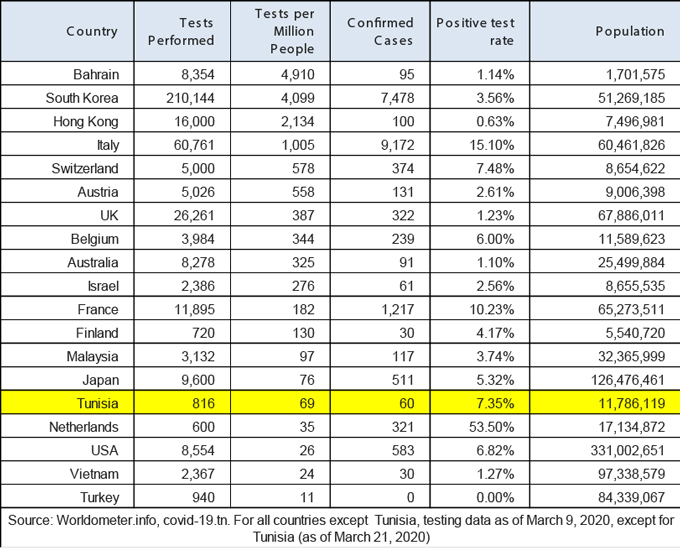 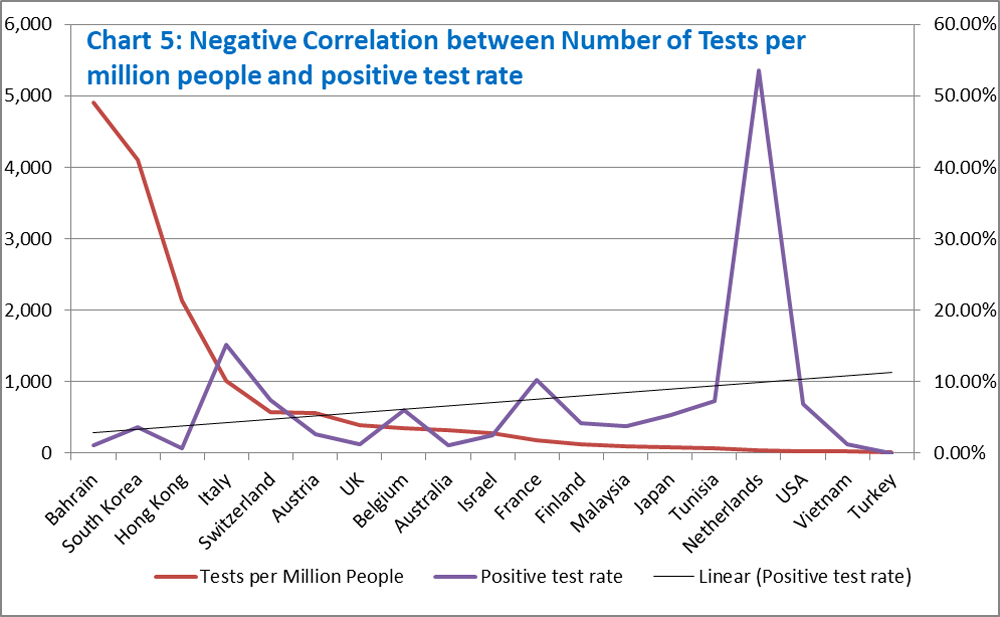 2- What are fatality rates likely to be?

The most recent estimates by the World Health Organization (WHO) is a 3.5% fatality rate (percentage of people who contract the Coronavirus and then die). Note that this number is evolving rapidly evolving as more developing countries face the epidemic, and as the virus reaches the South American and African continents. Moreover, the pandemic has not yet peaked, so the fatality rate (simplistically measured by the cumulative number of deaths divided by the number of confirmed cases) is likely to rise (as seen in Chart 6). 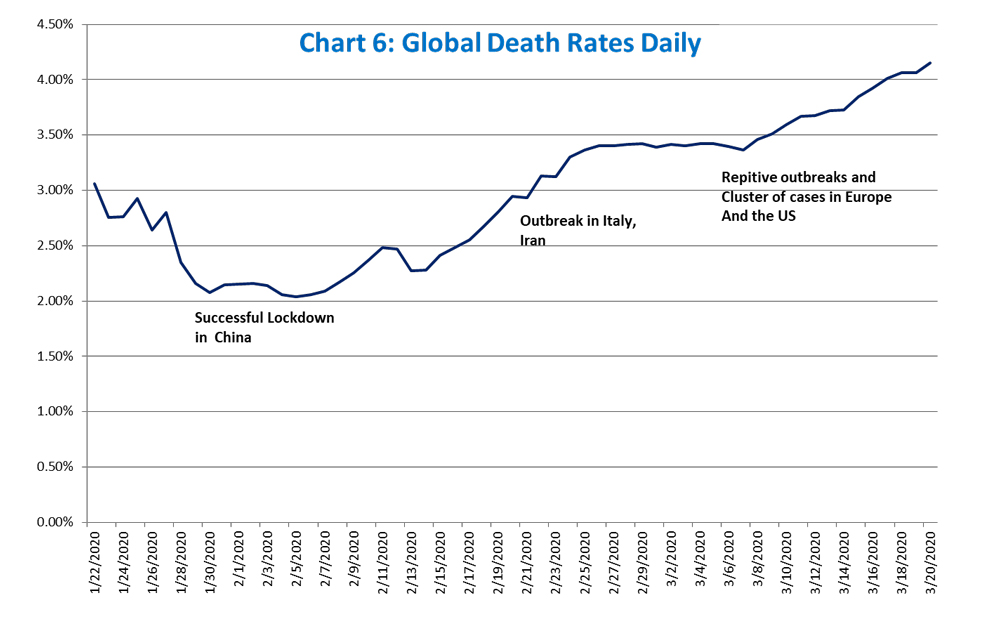 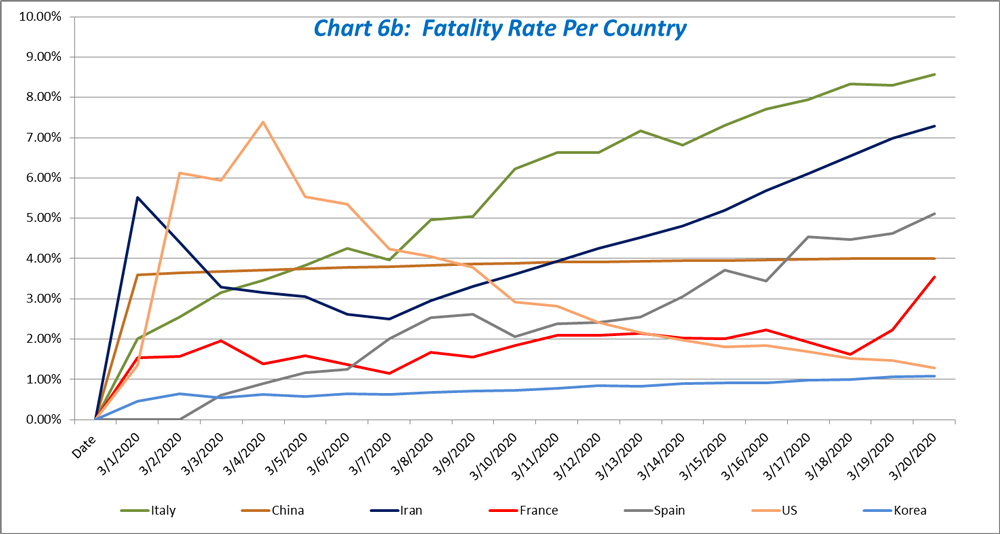 The fatality rates range from 0.6% in South Korea to 0.5% in Germany to 4% in Spain or China. Chart 6b also shows the scary and rampant increase in the fatality rate in the past two weeks. For instance, Italy’s fatality rate literally doubled from 4% on March 7 to 8.5% on March 20. 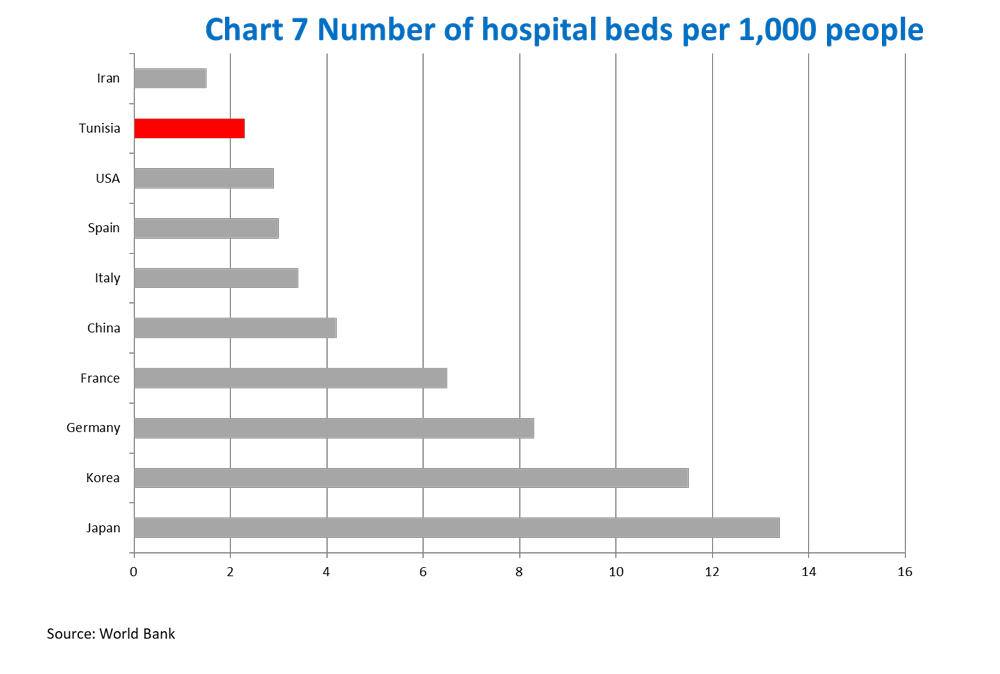 It is also worth highlighting that the number of cases really depends on the readiness of country and the development of its health care system. As shown in Chart 7, there is a clear correlation between the number of beds per 1,000 people and observed fatality rates. Countries with a low number of hospital beds such as Iran and Italy have much higher fatality rates (in the 3-4% range) compared to countries with a high number of beds (Korea, Japan and Germany).

This is what we can conclude:

Therefore, countries that act more quickly reduce the number of deaths at least six- to tenfold. Unfortunately, Tunisia is likely to be one of the overwhelmed countries.

Based on observed cases so far, around 20% of cases require hospitalization, 5% of cases require the Intensive Care Unit (ICU), and around 2.5% require very intensive help, with equipment such as ventilators or ECMO (extra-corporeal oxygenation).

So 100,000 people suddenly become infected, many of them will want to get tested. Around 20,000 will require hospitalization, 5,000 will need the ICU, and 2,500 will need machines. If we project that 50-60% of the Tunisian population will be infected by the virus, this implies that approximately 5.5 to 6 million people will be infected before the pandemic stems off. 50-60% is in line with estimates for other countries. Based on Tunisia’s current population (11.4 million), the table below provides a very sobering estimate of what is to come. According to anoptimistic fatality rate of 4%, between 228,000 and 273,600 people in Tunisia will die because of COVID-19. Using a more recent estimate of 8% like what we are seeing in Italy or Iran, our projections double to somewhere between 456,00 to 547,200 deaths caused by the virus.

What can we do now?

The epidemic in Tunisia has gone down (as it was bound to happen) and can, at best, be mitigated.

Given limited capabilities in Tunisia, it is important to flatten the curve (a phrase that has become very popular these days). With a slower spread of the infection, Tunisia’s precarious health care system will be able to handle cases much better, helping to lower the fatality rate and gain precious time until a cure or vaccination is obtained.

So far, the only measures that seem to work are social distancing, better hygiene, and for immediate impact, total confinement. Much like other countries, Tunisian was hesitant in taking drastic measures to stop the spread of the disease. To its credit, Tunisia still acted faster than other countries although some actions such as closing air and maritime routes with Italy should have been taken much sooner.

Based on what we know so far, the virus can spread across two meters when somebody coughs. The worst infection spreads via surfaces, with the virus surviving up to nine days on metal, ceramics and plastics. This means things like door knobs, tables or elevator buttons.

The only way to truly reduce the spread of the virus is through social distancing: keeping people home as much as possible, for as long as possible until this recedes, as proven in the past by the 1918 flu pandemic. Tomas Pueyo showed the examples of the American cities Philadelphia and St.Louis. St. Louis enacted measures to enforce social distancing, whereas Philadelphia was much more lax. Chart 8 shows the effective impact of social distancing in St. Louis, with a much lower fatality rate over time. 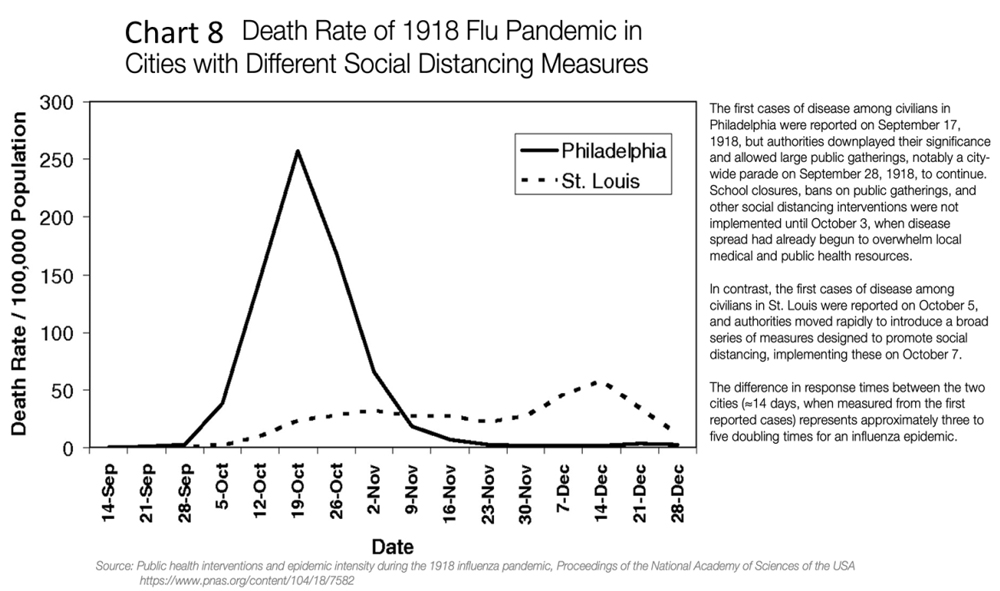 The general public needs to be aware of the risks. Everybody needs to be a part of the solution, and people need to abide by COVID-19 restrictions. People also need to come to terms with the fact that the crisis is here for quite some time, and that there is no immediate cure or vaccine for the virus.

In a follow up article, I will suggest how politicians, business leaders, and social influencers can help. I will include a model to project the spread of the virus and impact in Tunisia under different scenarios. In the meantime, stay home and stay safe.