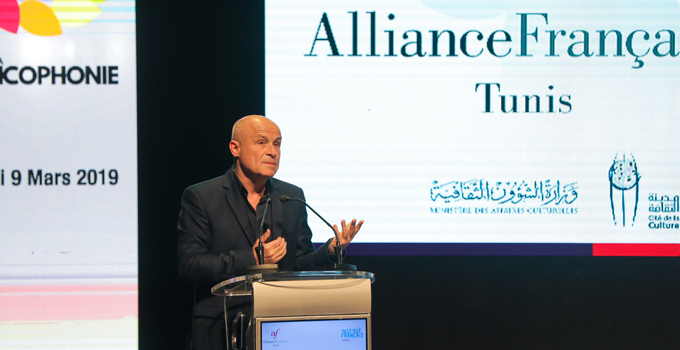 French cultural institutions are celebrating « the Francophonie » [1] throughout the month of March. In this context, French cultural institutions are holding the Forum de la Francophonie and projecting a series of « francophone » films—a selection of non-French films that have been erected by France as being « Francophone » as per the standard procedures of « Francophonie » policy. The celebration is part of preparations for the Summit of the Francophonie to be held in Tunis in Autumn 2020. The setting for this event is marked by a rather clear decline in the use of French language in Tunisia, to the benefit of other foreign languages like English. In a country where speaking « the French of France » is a powerful indicator of class and the question of languages is heavily charged with identity issues, the « Francophonie » that French President Emmanuel Macron attempts to revive echoes a French-speaking Tunisia on its last legs. 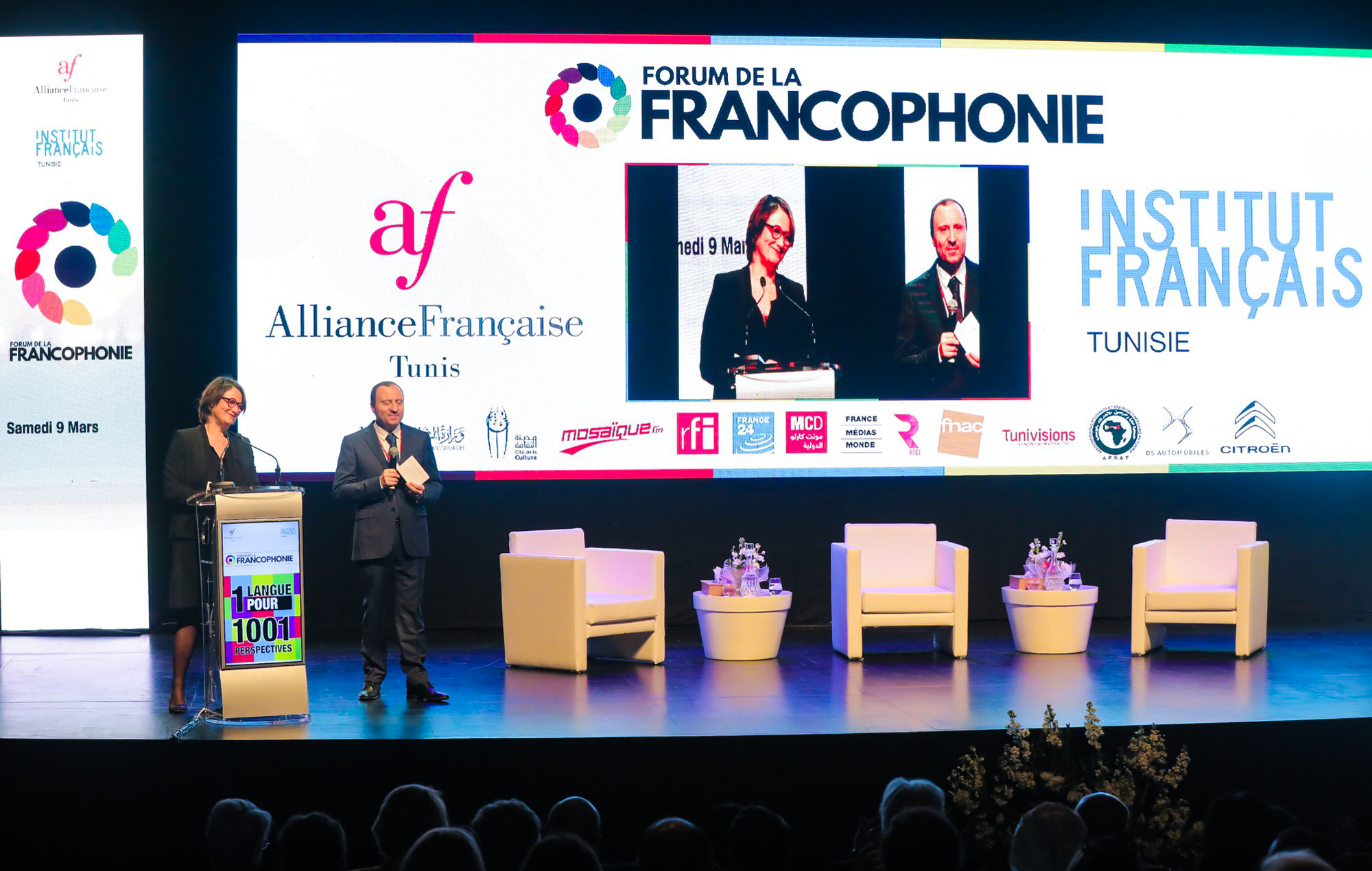 The end of the French monopoly

« French is a language that hasn’t really succeeded in Tunisia », says a young engineer standing in front of the Goethe Institute. He is waiting in the interminable line that forms outside the building each time registration opens for language courses. The growing popularity of other foreign languages in Tunisia marks the opposite trend that is emerging for French. Here, two other languages stand out, each drawing interest for different reasons: German and English. German, language of employability and emigration opportunities, is highly solicited by doctors, caregivers and engineers, according to Amel Said, director of the Goethe Institute’s language department. « We are seeing an annual growth rate of 8-10% », she observes. But Said notes the different reasons explaining this success: « Many students choose German aiming for better outcomes on the baccalaureate and for entry into preparatory schools or medical faculties in Tunisia. It’s not only emigration that pushes youth towards German ».

If people lined up outside the doors of this German institute attests to the popularity of the language, evidence demonstrating the popularity of English is still more visible. The growth of English language in Tunisia manifests in the public space and even in Tunisian dialect as the latter adopts new inflections. Whereas it may have been difficult to get one’s hands on English-language novels apart from the classics in Tunis around 2010, the same is no longer true today. In bookstores across the capital, one can peruse entire aisles offering a considerable range of contemporary anglophone literature, in addition to essays, philosophy, youth literature, etc. Over the past several years, shelves of English-language books have begun to nibble away at the monopoly that French might have otherwise held as the privileged foreign language in Tunisia, to the extent that one now finds English translations of books originally written in French. Bookstores are thus responding to a quite logical demand. The language of globalization (over half of Internet content is in English) and readily accessible through American audiovisual productions, English has now even found its place in the Tunisian dialect of the younger generations, as booktubing channels show. And owing to its prevalence on an international level, English has also become a tool of upward social mobility, a door to numerous academic and professional opportunities especially in the sector of non-governmental organizations.

But the decline of French language is naturally also the fruit of a political and social will rooted in the question of decolonization. Debates following the adoption of a requirement to integrate Arabic into commercial signs in the city of Tunis last December are proof. But the results born of different arabicization policies have fallen short of hopes, since such policies have not always enabled literary Arabic to become a tool for upward social mobilization. Until today, social mobility and the social reproduction of elites requires, in the vast majority of cases, fluency in a foreign language (French and more recently English) and, in the best case scenario, diplomas obtained in Western universities. With the possible exception of public service where exclusive use of Arabic was imposed in the beginning of the 2000s, fluency in standard Arabic alone offers limited paths for social mobility. Here, the linguistic decolonization sought by these politicians runs up against a first limitation. What’s more, advocates of decolonization by arabicization find themselves stumped by an internal contradiction: literary Arabic, which symbolizes anti-colonial purity and is supposed to replace French, cannot be considered Tunisians’ maternal language. Literary Arabic is taught at school, as is French or English. In the meantime, « Tunisian dialect is still considered a low, bastardized variation even if we construct our social imagination with this language », says Maha Smati, a doctoral student of humanities at the Catholic University of Louvain who is interested in debates around language politics in the Maghreb.

In contrast, the francophone camp deplores the decline of a language which, as some believe, carries within its very grammar humanism, tolerance and the fight against extremism. But within their protests against this declining trend, we can perceive fear of the threat against a material and symbolic domination that had never been challenged since the country’s independence. The disdain expressed each time political officials (particularly Islamists) make errors in French is a clear indication of the classist nature of linguistic fractures; Not being fluent in « the correct French », the « French of France » is considered a sign of incompetence, a flaw that immediately discredits the speaker. For Maha Smati, « the creolization of French in Tunisia could constitute a « danger » for people who want to maintain at all costs the monopoly of domination in society ». Indeed, accepting that French can be appropriated, and therefore creolized, was never a priority for advocates of the francophonie even while this creolization is widely practiced and assumed within the Tunisian dialect. For Smati, among other reasons this is due to the fact that « university studies in Tunisia (especially literary) are so steeped in the French system that there is an aspect of critique that is neglected: we have internalized the very French belief that the best French is that of Paris ». But as French political scientist and activist Françoise Vergès recalls in her article « Decolonizing the French language »: « Of the 700 million people who will speak French in 2050, 80% will be African. Without Africa, French would only be spoken by a few dozen million speakers. Paris can no longer decide alone how we must speak and write French ».

We can thus afford to imagine a future of French language in which the « French of France » would be pushed to the margins while Africa comes to set the tempo for the language. First, however, developing the intellectual and political means is necessary to forge this new dimension of « spoils of war » as Kateb Yacine says.

[1]The French term « Francophonie » with a capital « F » designates the policy of culture and education conceived by France with regard to countries where, for reasons mainly associated with French colonial history, French language is spoken. This term defines francophones as non-French individuals speaking the French language in countries where France hopes to have an influence. The French term « francophonie » in the general sense-as in the sense of terms like « anglophone » and « lusophone », defines francophone as a person who speaks a variation of the French language, without distinguishing amongst nationalities.