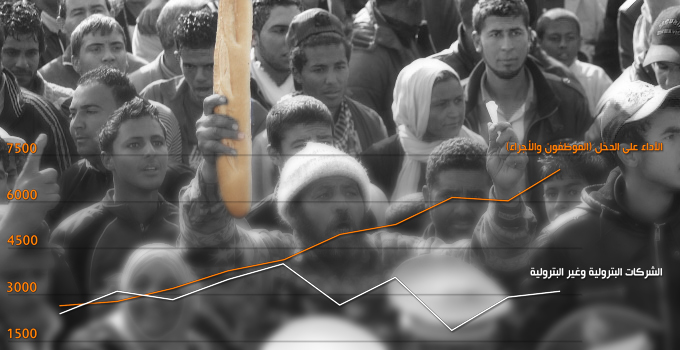 Regardless of the 113 deputies who voted to approve the new public budget, the law’s adoption suscitated the anger of opponents in parliament. Critics see the law as a new chapter in the state’s policy of economic injustice, exacerbating the economic and social crisis that has lingered for years now. A total of 36 parliamentarians voted against the new Finance law, an unprecedented ratio since 2011.

In 2018, economic indicators continued to plummet

Towards the end of 2018, public institutions like the Central Bank, the National Institute of Statistics and several ministries that deal with economic and financial statistics reported on the year’s economic outcome. Successive indicators published by these institutions are proof of contuing years of hardship, but such numbers have failed to inspire any drastic changes in economic policies as the Finance law of 2019 demonstrates.

The Finance law of 2019 focuses on mobilizing state revenues to reduce the budgetary deficit from 4.9% to 3.9%. This approach is primarily based on raising the state budget by 8.5% using internal resources, with 66.27% coming from tax revenues, 8.9% from non-tax revenues, and 24.82% of total state resources coming from loans. 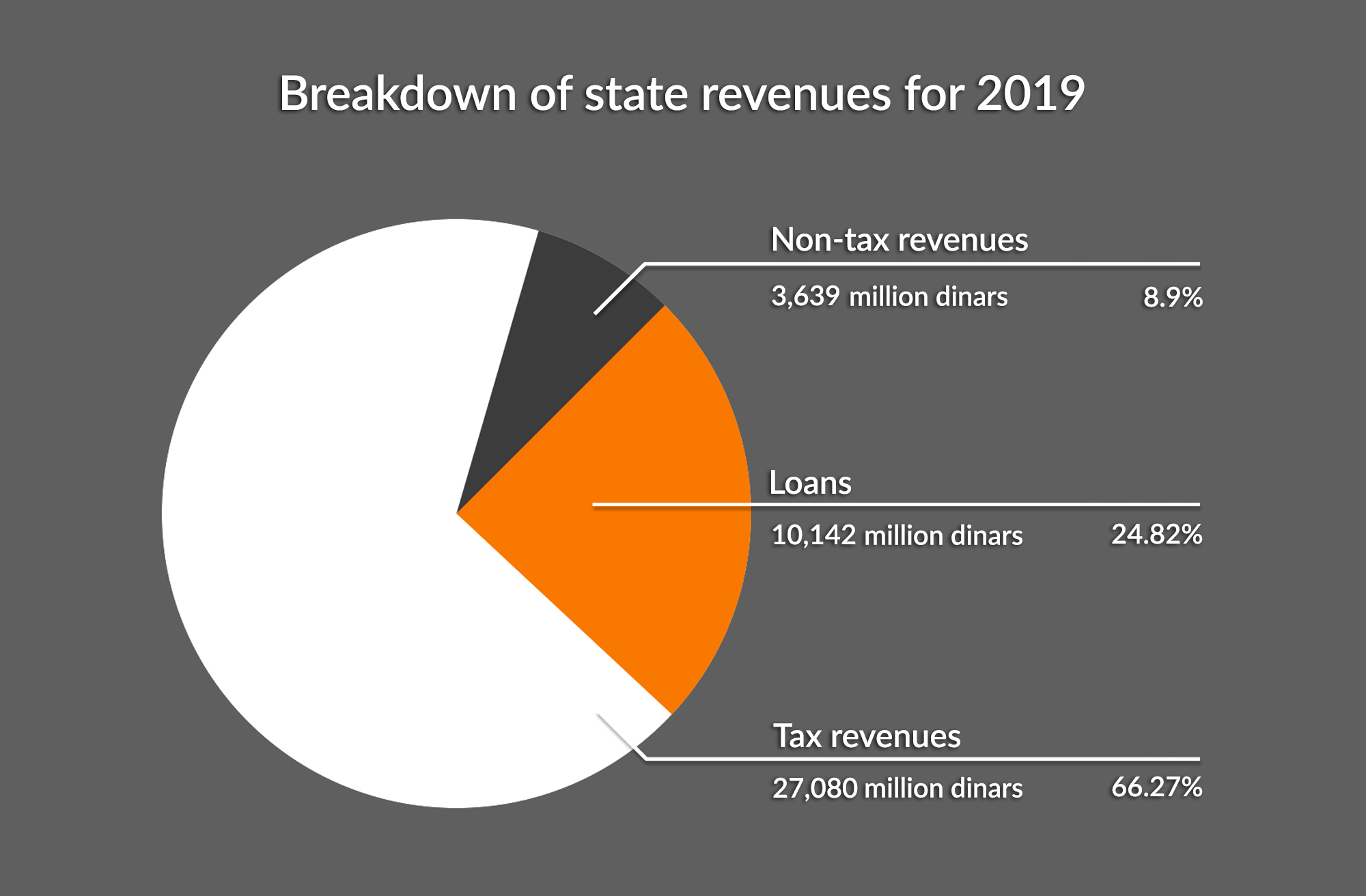 The government also raised the maximum for taxes witheld to 11.9%, bringing total direct tax revenues from income and companies to 10,047 million dinars. On the other hand, the postponed application of Article 13, a provision which introduces a revised tax rate of 35%, means that companies currently facing a 25% tax rate will not feel the changes until 2020. A list of partially exempted companies includes banks, financial institutions, investment companies, insurance companies, service companies in the hydrocarbons sector and institutions active in the oil sector from extraction to transport, refining and marketing in addition to major commercial spaces, car dealerships and foreign brand operators.

Suscitating anger from its opponents in parliament, Article 13 is not just an exceptional measure designed to spur investment, improve the economic climate or freeze a tax raise as the government would claim. Instead, Article 13 reflects a fiscal policy adopted years back in which workers and employees are made to shoulder the weight of state tax revenues. The measure carries over from the 2018 Finance law which re-activated the mechanism of tax exemptions previously suspended by the Investment Law of 2016. Between 2010-2017, workers saw a 43.1% increase in taxes deducted from their wages, while taxes witheld from oil companies and non-oil companies decreased by 43.3% between 2014-2017 according to figures published by the Finance Ministry. 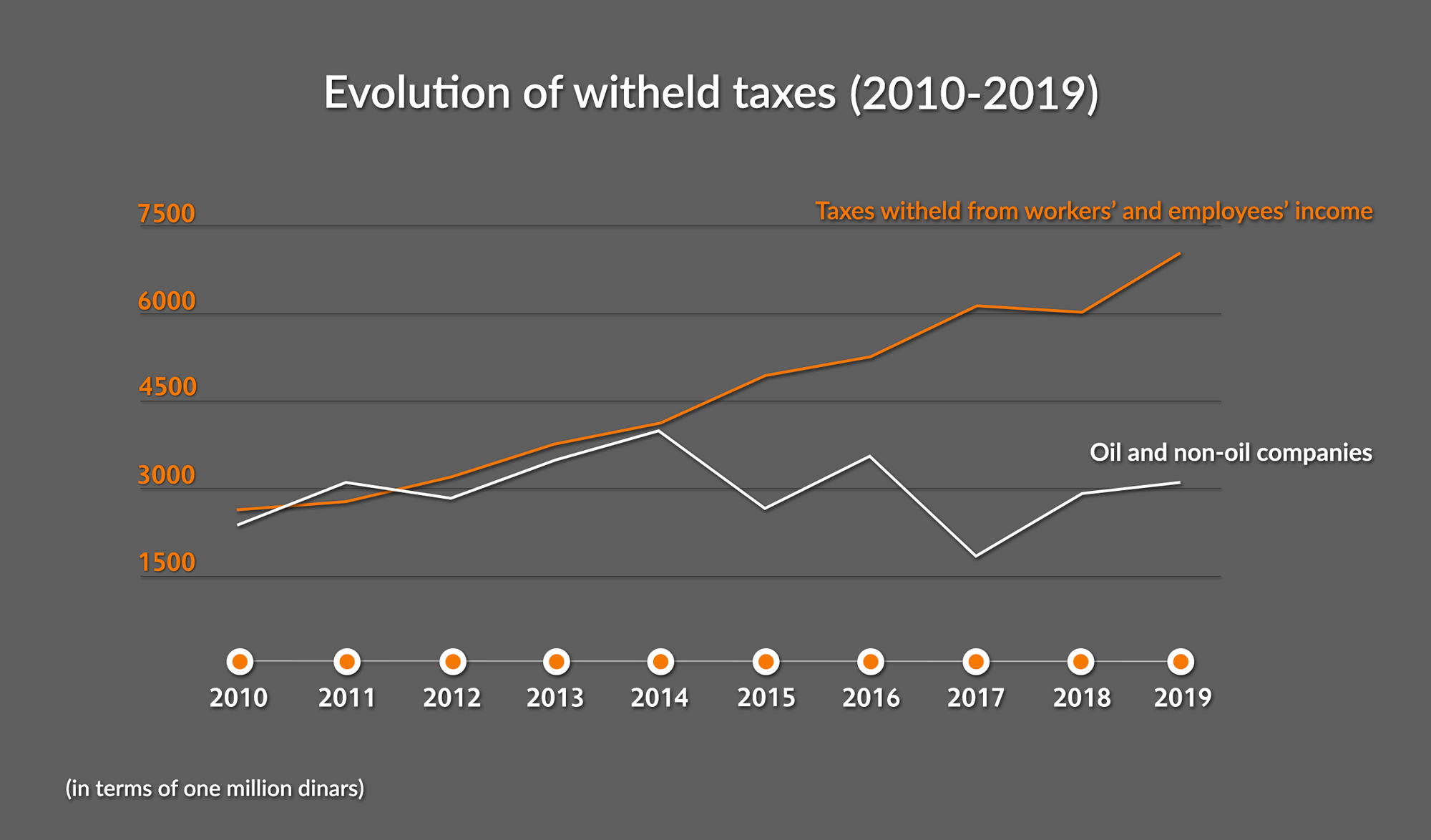 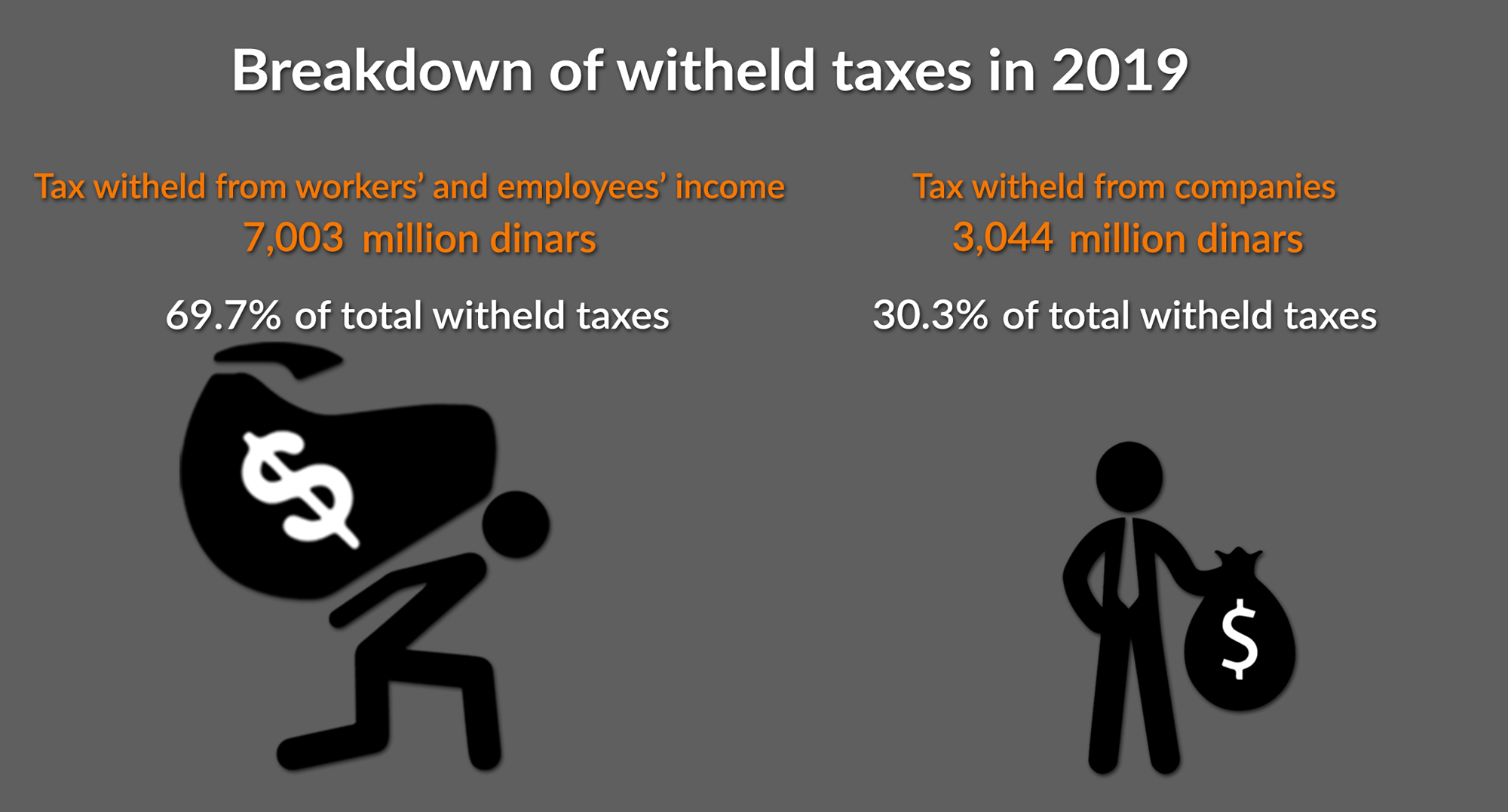 Paying off debt at the expense of development

Even beyond its tactic of mobilizing state resources as a means of reducing the budgetary deficit, the government has opted for excessive reliance on foreign loans. The latter will represent close to 25% of state revenues over the coming year for a value of 10,142 million dinars. A policy that keeps the door closed to potential solutions for the accumulation of public debt, which will reach 82,890 million dinars in 2019, or 70.9% of GDP (about 11,6911 million dinars). Between 2015-2019, the country’s debts increased by 43.39%, meaning that 22.7% of the 2019 budget, approximately 9,307 million dinars, will go towards public debt service. 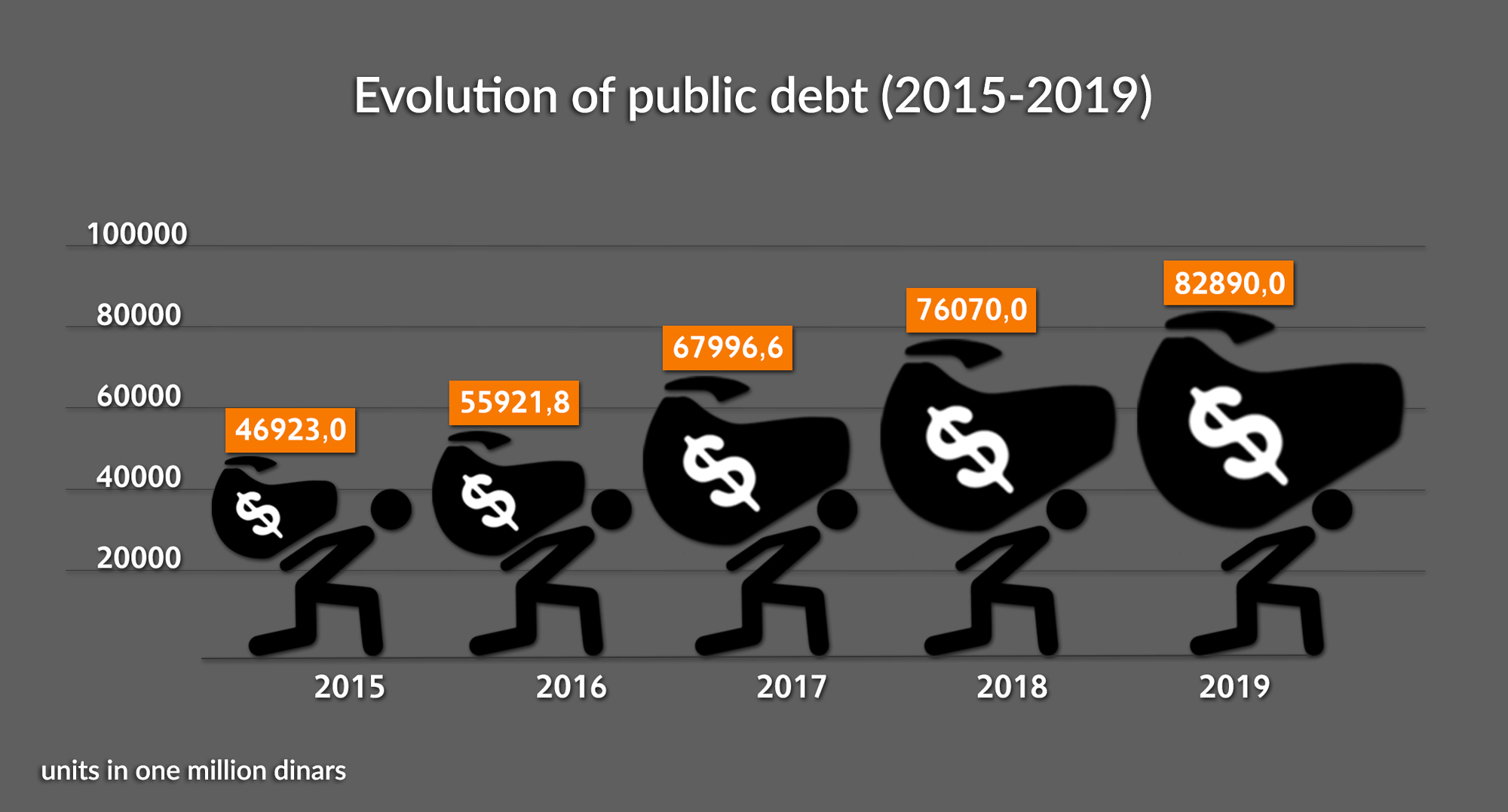 The new Finance law is no different from previous versions in adressing debt and its effects on public budgets. Statistics from the Finance Ministry indicate that debts will be paid off at the expense of development. Official figures for state expenditures illustrate the contrast: between 2015-2019, payments towards public debt jumped from 4,613 million dinars to 9,307 million dinars, while development spending crawled from 4,799 million dinars up to 6,150 million dinars. 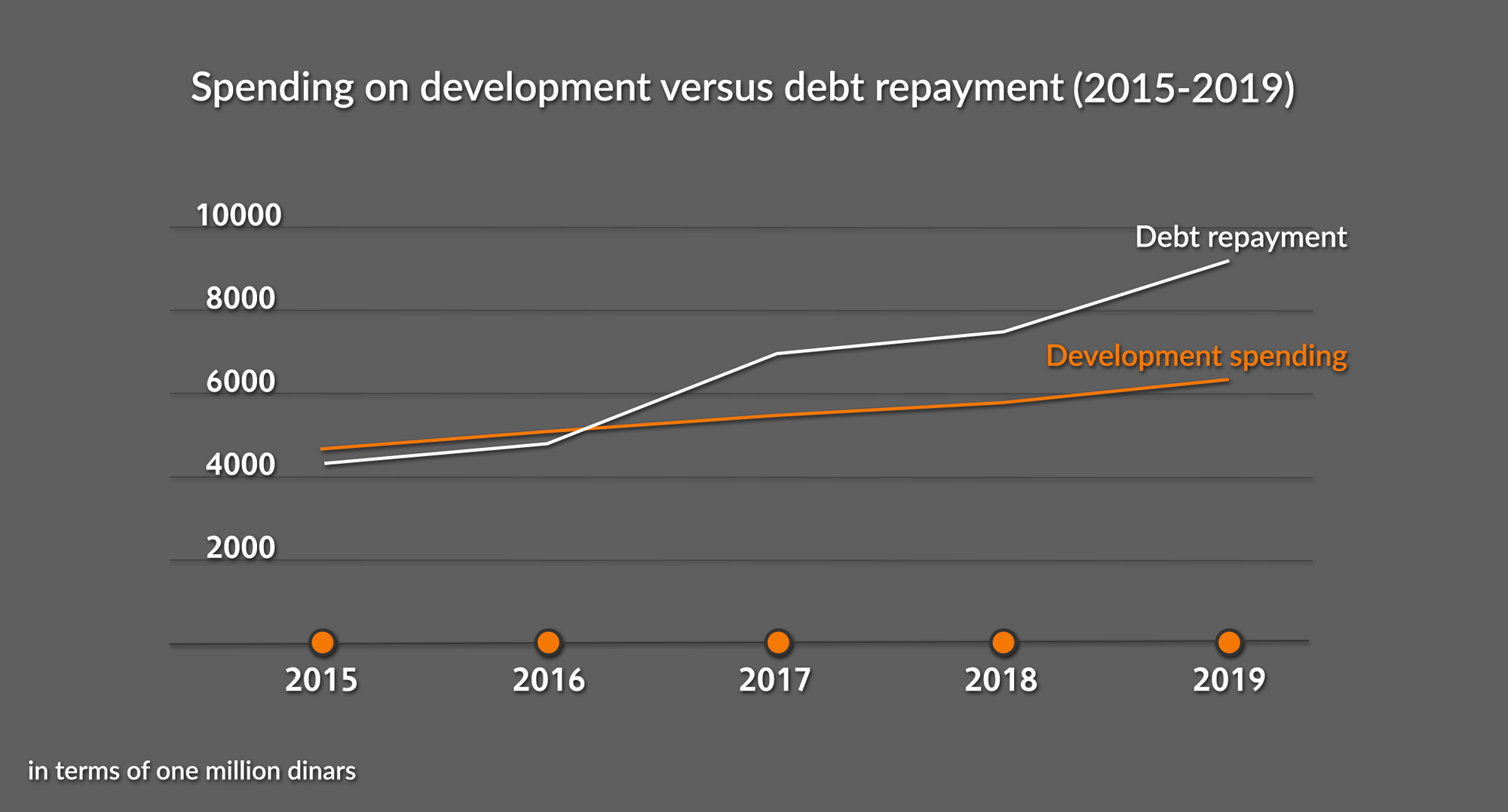 If the government succeeded in passing the Finance law of 2019, it is owing to the prime minister’s « National Coalition » base in parliament and to the recent alliance formed with Ennahdha. In the same stroke, the law’s passage provoked an unlikely scenario that merged traditional opponents like the Popular Front and Democratic Current, but also Nidaa Tunis. This has turned the latter into the government’s new adversary in parliament and critic of the state budget, even though it was Nidaa MPs whose votes went to pass previous Finance laws that so resemble the newest version. Indeed, the repercussions of past Finance laws are likely to remain unchanged in 2019 through measures that perpetuate fiscal injustice. As in years past, the population’s most vulnerable groups are set up to bear the consequences of economic choices before political parties reshuffle in anticipation of the electoral period expected at the end of 2019.