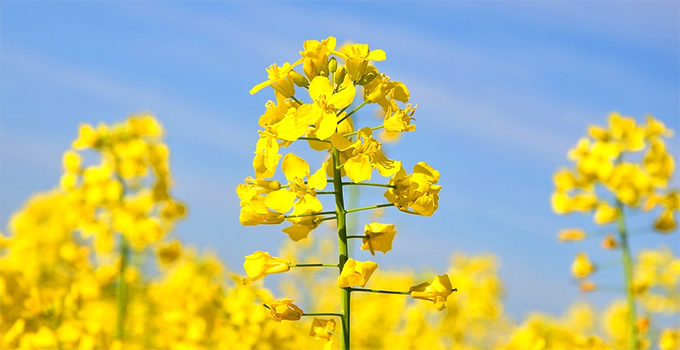 The project is an ambitious one, aiming to set up an entire chain of production from harvest, to crush, to cooking oil and animal feed. In February 2017, the late Xavier Beuilin, former president of both Groupe AVRIL and the influential French agricultural union FNSEA, joined Omar El Behi, former Secretary General of Tunisia’s Ministry of Agriculture, to announce a « development and structuration » program underway for a Tunisian canola sector. The chain includes just over 100 farmers in Beja, Bizerte and Zaghouan who hold a production contract with Carthage Grains, an industrial oilseed processor that traditionally crushes imported soy and corn seed; the canola is crushed and its oil purchased by AVRIL subsidiaries, CRISTAL Tunisie and Lesieur for packaging and marketing cooking oil, while Sanders Tunisie buys the meal used in animal feed manufacturing.

Behind the little yellow flowers and shiny « 100% Tunisian » label, efforts to establish a canola industry in Tunisia arise from an amalgam of factors: State agricultural policies, the country’s food and trade balance, consumer purchasing power, the livelihood of cereal and livestock farmers and also the overarching question of food security. This is partly because canola is the runner up protein source for animal feed after soy, which Tunisia does not grow and imports in increasing quantities. Reinforced by French agribusiness and especially canola promoter Groupe AVRIL, Tunisian actors including Carthage Grains and agricultural unions Conect Agri, SYNAGRI and UTAP have for decades rallied the Ministry of Agriculture to subsidize canola production.

While the US through its US Grain Council promotes the use of US grains in Tunisia’s animal feed sector, France’s Groupe AVRIL supplies Tunisian farmers with seeds to grow canola. In the latter case, collaboration began in the early nineties with the company Sofiprotéol which would later become Groupe AVRIL. A processing plant in Ben Bechir, Jendouba, had already begun crushing the harvests supplied by canola-planting farmers when Tunisia’s state-owned Office National des Huiles (ONH) pulled out of the project, opting to invest in cheaper imported vegetable oils. From 2001 to 2014, the canola initiative lay dormant until large-scale dairy and field crop farmers affiliated with unions Conect Agri, UTAP and Synagri pushed for its relaunch with Carthage Grains.

The first harvests sold to Carthage Grains in 2015 and 2016 were bought by Sanders Tunisie, who now markets a formula containing a mix of canola and soy. This product, explains Sanders Tunisie animal production engineer Mustapha Ben Rejeb, has the same protein and energy value as soy-based feed but can be marketed at 20 to 40 dinars less per ton (one ton of all-soy feed averages between 520 to 540 dinars). Despite the more cost-effective alternative that this represents for livestock farmers, Ben Rejeb says that the product has been « difficult to sell in Tunisia », mainly because the canola-containing formula produces a blackish-colored pellet that farmers are not used to and are reluctant to try.

« Our main concern is feeding people »

The same is not the case for dairy and cereal grain farmer Aziz Bou Hajba, who not only purchases canola-containing feed for his animals but also grows the oilseed on his land in Zaghouan. SYNAGRI member, Bou Hajba sees the development of a canola sector a shift towards greater auto-sufficiency in wheat, vegetable proteins and animal feed, and more broadly part of a « pragmatic approach to feeding the country ». He regrets that failed initiatives started 15 years back might have helped to prevent Tunisia’s dependence on seed and grain imports, describing how these failures are symptomatic of the State’s pricing policies: « The government finds money more easily for importing than it does for financing a new sector … For them the important thing is to maintain a good purchasing power, that people manage to feed themselves and to feed their livestock ». The same logic, he says, means that dairy farmers remain in a precarious situation with the cost of milk is controlled for consumers, while the cost of production is at the mercy of fluctuating soy prices in the international market. By his calculations, a Tunisian canola industry represents the possibility of at least partially replacing soy imports with a locally-produced source of protein and energy for livestock.

Following the announcement of the initiative to launch a canola sector, agro-economist and CIHEAM researcher Zied Ahmed raised a few red flags, wondering for example whether Ministry-backed incentives to enhance canola production would be to the detriment of cereal crop production. When we ask Aziz Bou Hajba about it, he replies that the point is not to replace cereals but to improve their production by incorporating canola into a crop rotation that will improve soil quality and reduce the spread of diseases. In response to concerns related to the use of GMO (genetically modified) seeds supplied by the Groupe AVRIL, his response is categorical: the seeds used, called Clearfield, are not classified as GMO since they are the product of mutagenesis, a process which takes place in nature but can also be « provoked » in laboratories to develop herbicide tolerant crop varieties. The result, he adds, is « the harvest of a clean seed which means a good quality oil and meal that keep well, a happy manufacturer, a well-paid farmer… ». Bou Hajba concludes that the argument to ban use of biotechnology is not only « hypocritical, because the same countries that restrict the cultivation of GMO crops are feeding their livestock with GMO soy and corn », but also represents « a false problem » in Tunisia, since, unlike « affluent countries with other means of subsistence who can decide to export 100 million tons or 50 thousand tons, our main concern is simply feeding people ».

The seeds we choose to sow, or not to

And yet, policy changes in the use of biotechnology in countries engineering the seeds that Tunisia imports are not without consequence for Tunisian agriculture. As Bou Hajba himself points out, European countries began growing canola in the early seventies faced with America’s vast soy empire, and agribusiness giants like AVRIL up until recently have promoted the oilseed as a locally-produced non-GMO resource for the biodiesel and animal feed industries. But in July, a decision issued the European Union reconsiders this classification following protests in France denouncing Clearfield and other seed varieties adapted by mutagenesis. Based on its findings that « the use of herbicide resistant seed varieties obtained by mutagenesis carries a risk of significant harm to the environment and to human and animal health », the EU Court of Justice decided that « organisms obtained by mutagenesis are GMOs and are, in principle, subject to the obligations laid down by the GMO directive ». Some are now calling for US Department of Agriculture to follow suit.

In the meantime, Tunisia’s cereal farmers are gearing up for this year’s planting season, when close to nine thousand hectares of canola will be planted mainly in the rainier north of the country. A handful of farmers from the region attended a September 20 seminar on food security organized ICARDA and the INGC, where Bou Hajba introduced us to Rabaâ Ben Salah, director of the Ministry of Agriculture’s section for field crops. Alluding to back-to-back meetings and the fast-approaching planting season, Ben Salah said did not have time to speak about the Ministry-supported initiative integrate canola into farmer’s crop rotations. Nor did cereal farmer Wassim Sellaouti, who was too busy describing the seed varieties grown on his family’s farm in Beja to discuss canola, which they do not grow. When asked about efforts to develop a canola sector that is « 100% Tunisian », he is dismissive, replying emphatically that for him, « any imported seed is a problem ».