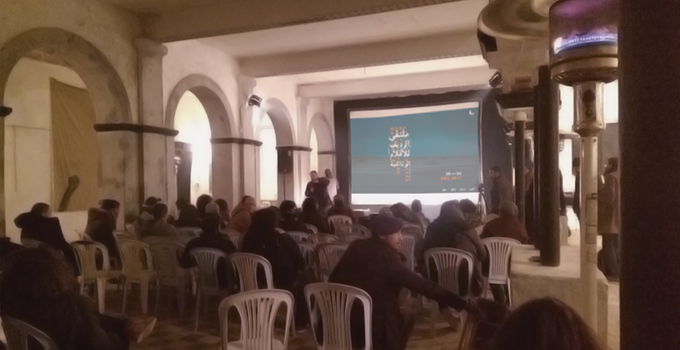 From Gafsa to Redeyef, it is 45 miles and just about an hour’s drive through dry, chalky land dotted with dusty green shrubs. Beyond a long and gradual ascent, the town materializes, empty and grey. It is the end of December, and winter break: everything is closed up, so the streets appear as bleak as the weather. A few minutes off the main road is Economat, the main venue for this year’s Documentary Film Festival. Over four days, Economat is alive with a team of organizers, seasoned and amateur filmmakers, sound and projection engineers, musicians, professors and festival goers. Economat, recently renovated and sparsely equipped, is the vestige of a colonial structure. Though barely a few degrees warmer than outside, the building and energy it holds are welcoming refuge from the cold air and sharp wind. On the opening evening, a concert by Abdullah Miniawy and Ahmed Salah from Egypt draw a considerable crowd, a number of youth from around town, besides the 30 or so people bussed in from the capital. 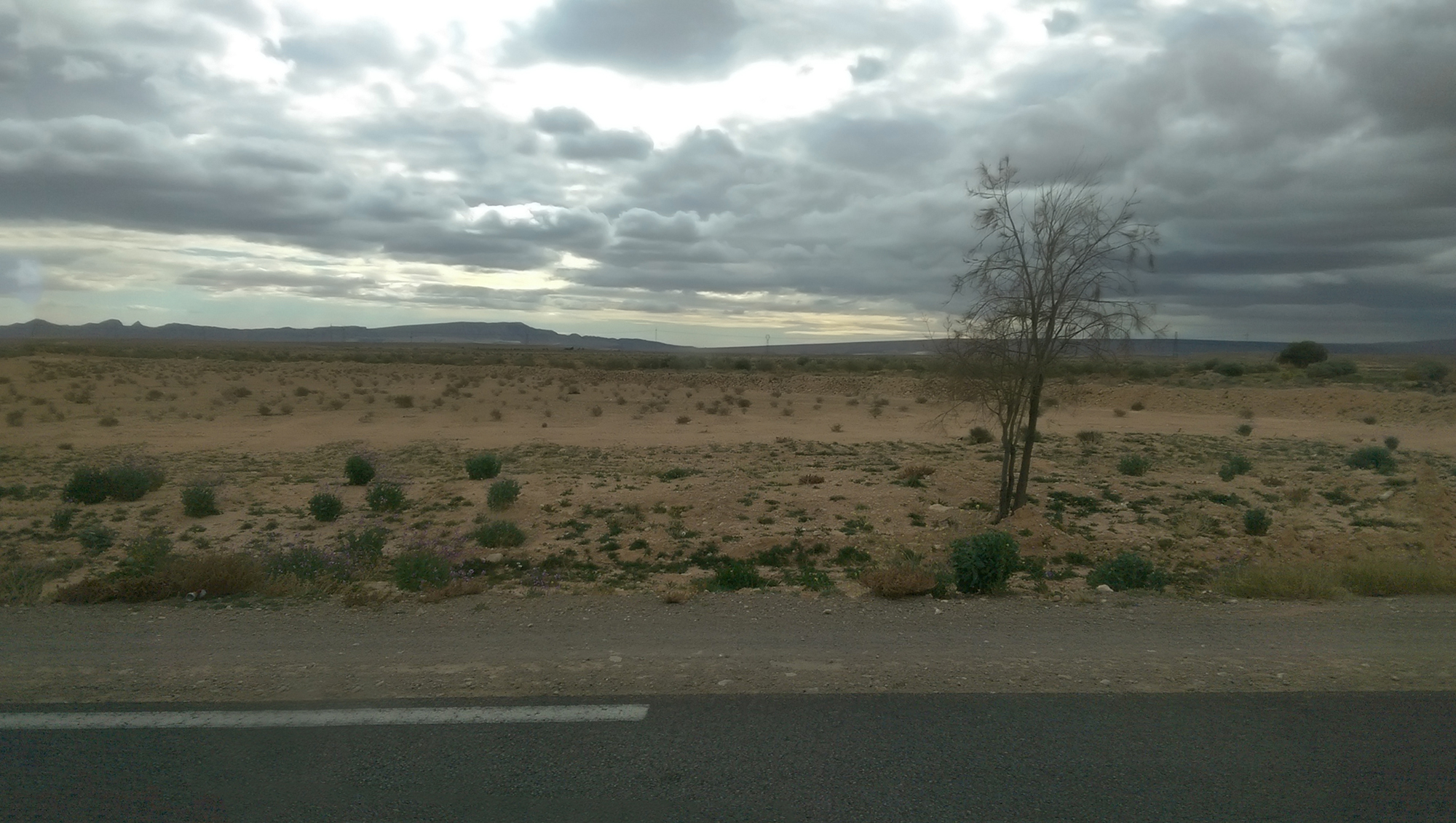 Challenging images in « a difficult terrain »

Among those present are several filmmakers whose documentaries are featured during the festival: Ziad Kalthoum (Syria) of Taste of Cement; Djamel Kerkar (Algeria) of Atlal; Ridha Tlili (Tunisia) of Forgotten. The Battle of Chile, a three-part documentary by Patricio Guzman about Chile’s 1973 coup d’Etat is the geographic anomaly to this year’s film selection. Filmmaker Alaeddine Slim, the festival’s artistic director for the second year in a row, explains that the documentary is a historical reference in film editing. By comparison, he remarks, « we had a lot of material on the Tunisian revolution via television, Facebook, social networks… But in my opinion there isn’t someone who worked on the Tunisian revolution, or anything of this caliber with regard to the images that were filmed. The idea is about how film editing, how the view presented by a filmmaker can change the nature of these images ».

In the festival’s previous editions, screenings took place in several locations throughout town; this year, the organizers decided to consolidate everything in once space, not least of all because Redeyef has no space dedicated to movie projections. The cultural center has a screen, but is in « a lamentable state », says Slim. « It’s a very difficult terrain: there is no place for film, no movie theaters. We have to make do, to improvise…these aren’t the ideal conditions for film projections » he says.

Slim admits his frustration, and the general sense among the festival organizers of being blocked in many ways. « We can’t resolve problems that are the State’s responsibility. So long as the State takes no interest, it’s going to be difficult. We adapt, we’ve developed certain reflexes—but everything is unpredictable here. In this way, you limit yourself. You can’t broaden the scope or develop the encounters … It’s up to the government to build a theater, a hostel, a hotel » to accomodate out-of-towners who want to participate in the festival. « But even in the capital, » he observes, « culture is the least of the State’s concerns. So imagine in Redeyef ». 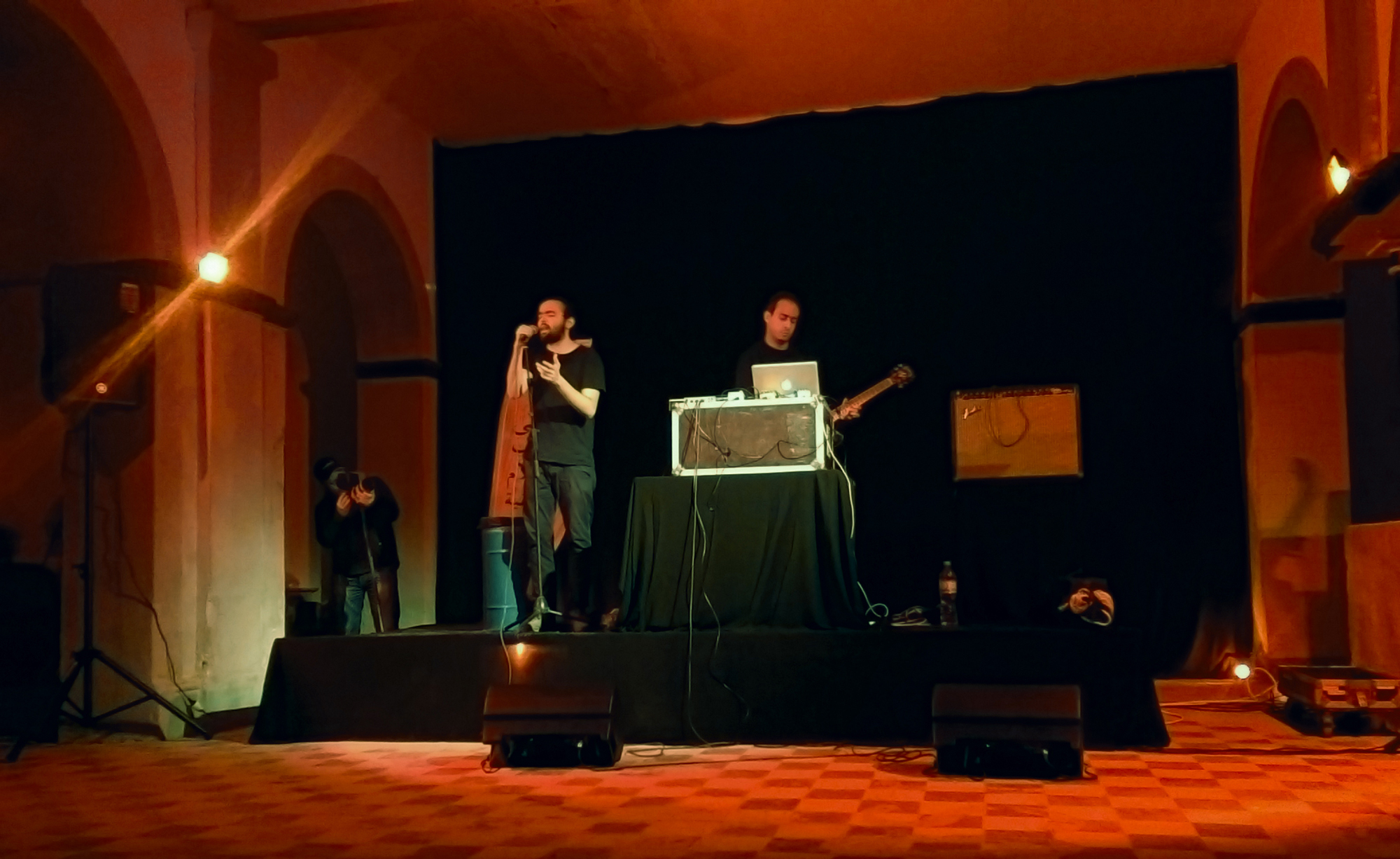 Behind the scenes, documentaries in the making

A few minutes away from Economat is the festival’s other, non-public venue. Several days before festival goers began showing up for films, concerts and discussions, four university students from the School of Multimedia Arts (ISAM) in Tunis and ten high school students from Redeyef had started working on their own documentary projects. In the impromptu laboratory, a compact apartment with a view facing the factory where phosphate is cleaned less than a mile away, filmmaker Abdallah Yahya, film editor Fakhreddine Amri and sound engineers Moncef Taleb and Slim Jebali are leading two workshops, on film and sound documentaries respectively.

A few of the high schools students have worked on film projects for previous editions, but this is a first experiment in sound for the four 15-year olds working with Taleb and Jebali. The students describe in turn that they had never given any thought to sound engineering until day one of the workshop, when they were prompted to « describe your day in sounds ». After becoming acquainted with the equipment (microphones, speakers, mixers, recorder), they set off into town in pairs having decided on topics, and what they would record in order to create a sort of audio portrait of Redeyef. What were the subjects they came up with? One is an interview with a local man who spent 22 years in prison. Having received a life sentence in the nineties, the man was released in 2011, and the story, recounts one of the students, is about his time in prison, and also about getting out: how he returned to a transformed Redeyef and had to start a new life where everything he knew had changed after two decades gone by.

The other topic? « The marginalization of youth in Redeyef », volunteers one of the students, who describes how the Phosphate Company of Gafsa (CPG) monopolizes the economy with no return for or interest in the town. « It’s the same before and after the revolution. Nothing has changed », he says. « There are people who want to do a lot of things in Redeyef, but there’s no support. There are youth who love culture—dance, theater, singing, drawing—everything. But there’s no space where they can do it ». Yahya, Fakhi, Taleb and Jebali are clearly impressed by the awareness of the high school students they are working with, and comment that the youth need little prompting to identify topics and themes for documentary projects about their town.

Over at this Economat, the turnout for screenings and debates ebbs and flows. Partly, says Slim, this is because of the more pressing « social and economic problems that residents deal with ». As he indicates from the first, nothing here is certain. « Each year the number of spectators has improved… but it’s still small », he concedes.