In a house-turned artists’ studio, Soudani, 28 years old, sits on a zebra-print sofa surrounded by his own creations. Spray-painted in large red letters across the gate outside is « Reality Lines », the name of the exposition, a series of paintings and installations that Soudani describes as a « reproduction » of what he does on the street. Or so he says at first. Soudani opens up little by little, revealing just one layer of himself at a time. After a bit of prompting, he elaborates that the work here « goes beyond the spirit of classic street art », that is to say, graffitied letters and « Va-Jo » written over and over.

Between machines and nature, surreality ?

In one corner of the gallery are three paintings, each featuring a menhir-like head, hung on opposing walls and facing one another as if in silent conversation; in an adjacent room, a school of grey x-eyed fish are countered by a single vermillion fish swimming in the opposite direction; in yet another room, a gigantic, sleepy-eyed blue whale floats in an orange-pink sea. The technicolor forms and faces on the studio’s white walls are like windows into another universe. The lines that Soudani draws between different realities are fluid, suggesting an ebb and flow between a world of machines, and another of nature. Distorted geometrical shapes and objects are infused with things organic: hands, flowers, vines, a brain and heart. Soudani observes that we are living in a world of « total chaos », one encumbered by technology and social media. « Sometimes you talk to people… » he laughs, alluding to people plugged into their gadgets and hunched over their telephones, « …they’re not human anymore. » He mentions media’s representation of « beauty » and how people strive to meet impossible norms and standards. « Why are we always looking for exact symmetry? » he wonders. 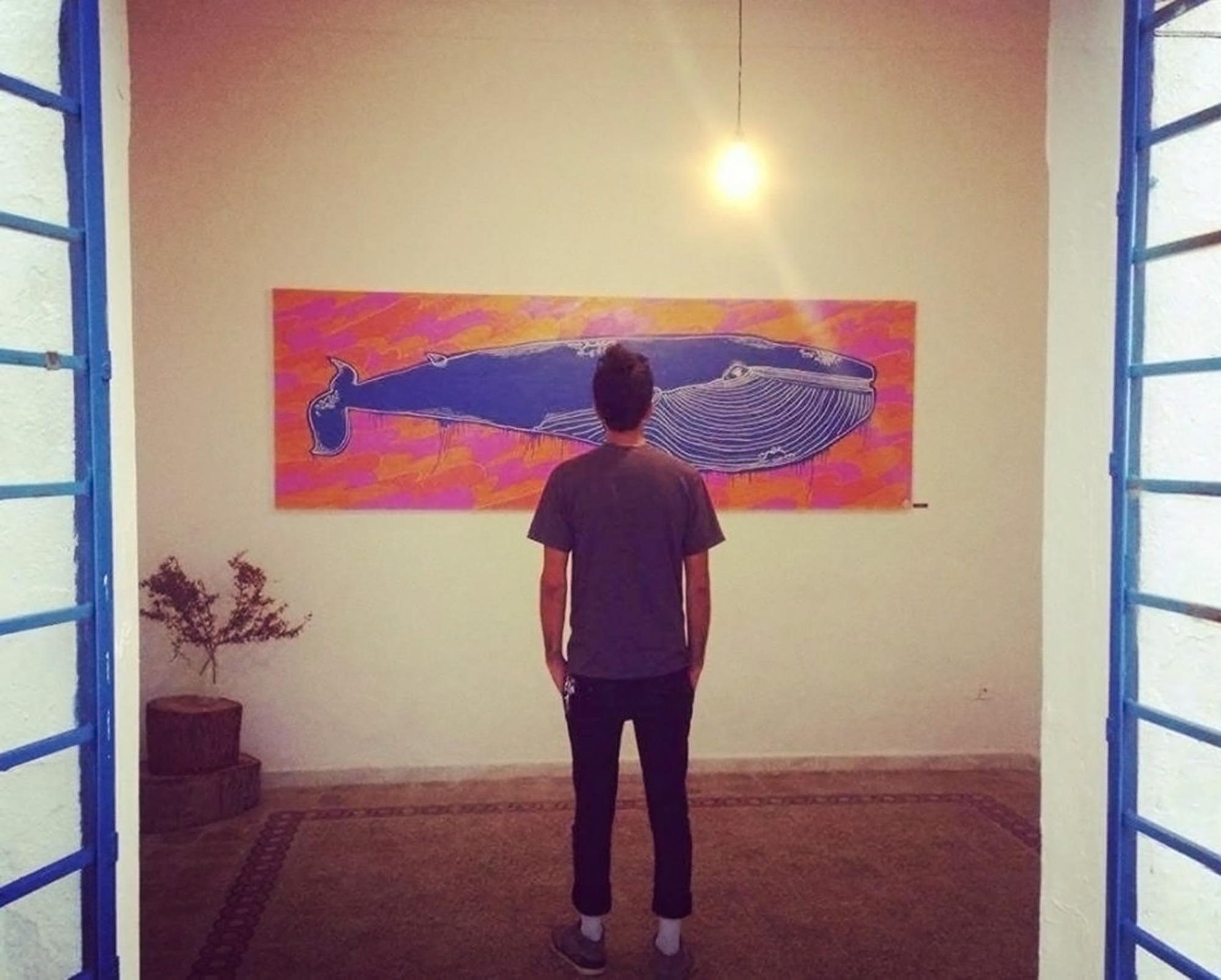 The three heads in silent conversation have names: they are Mr. Everything, Mr. Everywhere and Mr. Everytime. Soudani explains that they represent a « mythical image that we have in our heads…what we dream of doing. Sometimes we want to have 8 arms and 7 heads, to be here and there, to have the energy to do several things at once. We want to correct things that happened yesterday, anticipate things that will happen tomorrow, control the present ». Of course we never get there.

In a world dominated by technology, industry, and artificial standards, Soudani says that he looks for a « more human side of things… to go back to our origins ». This longing is precisely what drove the street artist to take on the principal role in Ala Eddine Slim’s The Last of Us, a film which in 2016 won the Lion of the Future award in the Venice Film Festival and the Tanit d’or award for Best Debut in the Carthage International Film Festival. With a background in image and graphic design, Soudani had zero acting experience when he agreed to play the film’s protagonist, a migrant whose attempt to cross from North Africa to Europe lands him on an uninhabited island. « I met the filmmaker during a period when I wanted to go out into the wild and isolate myself and be in real contact with nature. » Soudani recognized himself in the character, called « N »: « He’s always headed somewhere north, but towards no exact point. He lives day by day… after, he gets lost and finds himself on another island. He adapts to nature, he doesn’t stop… he is not stagnant. He was disoriented by his initial goal, he adapts and finds alternatives…He’s growing, growing, growing… » 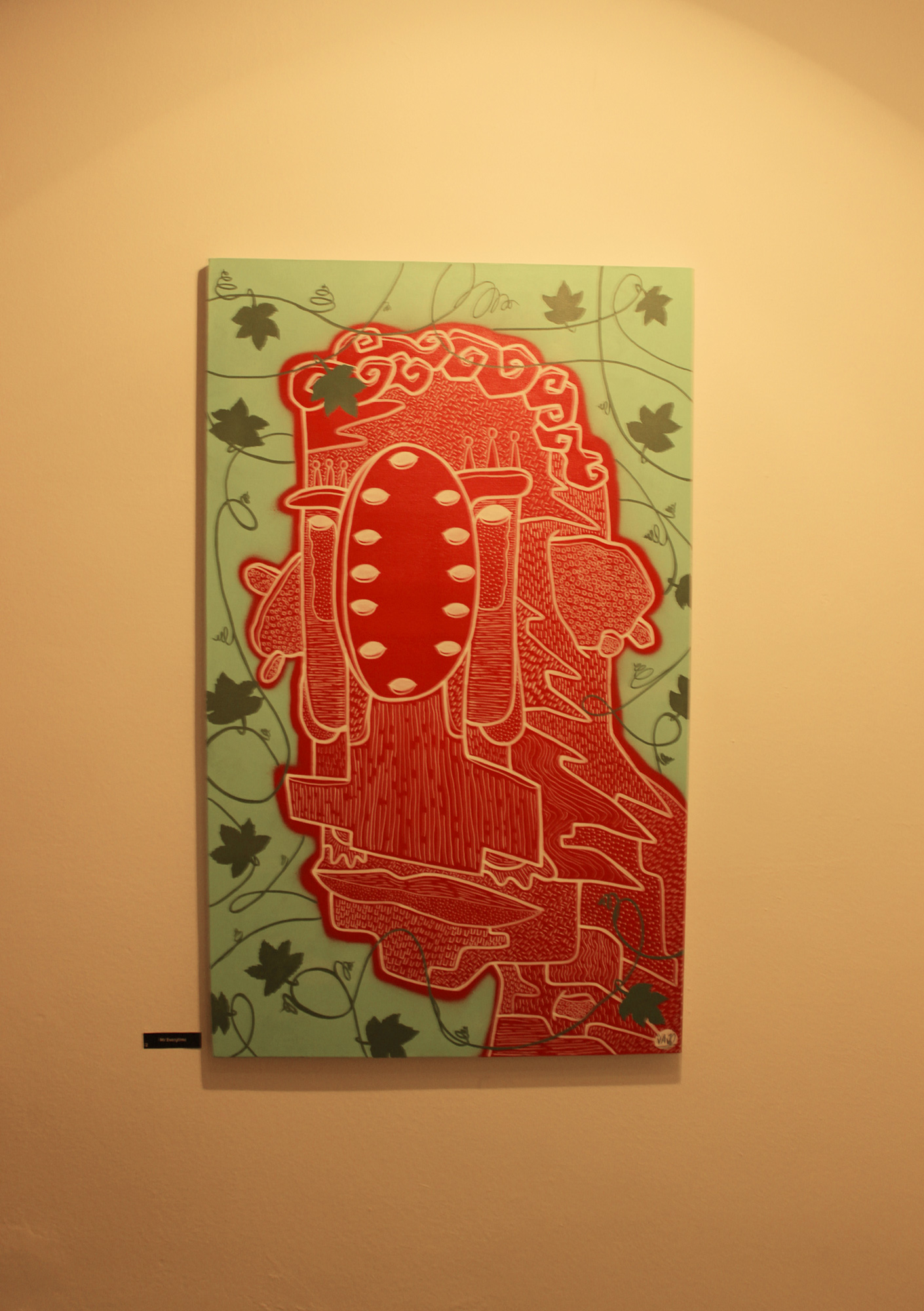 “A far-away journey for myself”

Soudani smiles and his voice trails off. It’s unclear whether he’s talking about « N » or himself. For this is the impression that one has of Soudani, that he’s always connecting the dots, moving from one project to another. This includes jobs on the side which enable him to sustain a certain rhythm of productivity. He reflects on how his work has changed over the years. « I’ve matured. Before there was a more anarchic side [to my art] ». Now, he muses, « I see things differently… » After a pause, he adds, « Perhaps that’s another goal of the expo, a discovery of my personality… a far-away journey for myself. »

« Frankly, if I’m not doing this, I don’t feel alive. Why do I exist if I don’t do this? » He repeats the question, emphasizing its weight: « Really, why do I exist if I don’t do this? This makes me feel that I’m alive, that there is something vital, organic…I always come back to the nature side of things ». Although Soudani has lived in Tunis since his university studies, Gabes remains Soudani’s main « point of reference ». Considering this, he continues: « Maybe I got into the habit of living like this as a child. In my family, you did. There were things you did without knowing whether or not there would be a return, but you did it so that you felt alive. It’s like breathing: you don’t say, I don’t know what it will bring me in the end, so I’m not going to breathe. This is breathing, this is me. »

Needless to say that Soudani is already working on another project, something that will build off of “Reality Lines”. But it’s early yet to talk about the next endeavor, and Soudani only hints at what is to come. « I want to create a universe in continuity with all of this » he says with a glance towards the technicolor faces, shapes and animals surrounding him.