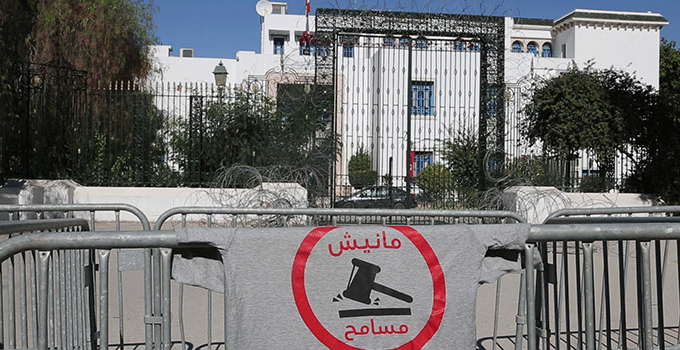 For some, the law could also be ‘the final blow to Tunisia’s transition’. Certainly, much has been said about the “Manich Msamah” campaign and its success in mobilizing Tunisians against a probable soft economic counterrevolution. Indeed, popular resistance to the proposed bill owes its organizational efficacy and success to the social activists of Manich Msamah. But the continuous arm wrestling between the Presidency and “Manich Msamah“ reveals more than what has been said in the press so far.

Since the 2014 election, the political scene in Tunisia has been marked by consensus. Prior to the election, Nidaa Tounes and Ennahdha demonized each other. After the election, Beji Caid Essebsi rubbed shoulders with Rached Ghannouchi. The two men seemed to agree on the new roadmap and their ideological differences disappeared, paving the way to the “disappearance of politics”. This so-called depoliticization of the political scene means that politics and ideologies come second. What comes first is, undoubtedly, economy and security. This, however, is neither new nor particular to Tunisian politics. Now, the dynamics of neoliberalism (economy) determine politics, not vice versa. Likewise, some talk now of what is called “post-politics”. For instance, in his “Post-Politics in Context”, Ali Riza Taşkale offers a definition of the term as follows:

…If neoliberalism seeks to expand market-based economic rationalities into all spheres of life…then post-politics is the current rationality of replacing politics with economics. By seeking to render the political a technical rationality, a calculated and strategic behavior, post-politics seeks to suppress not only the political but also the ability to debate and critique. It produces a vision of society in which conflict and antagonism are replaced with economic evaluation and measurement. Post-politics is, in short, hostile to politicization and radical social change. Ali Riza Taşkale “Post-Politics in Context”

In short, “Manich Msamah” operates amidst two dynamics: the political consensus of Nidaa Tounes and Ennahdha, and the current rigid neoliberal policies imposed by the IMF and the World Bank. This “neoliberal consensual politics” survives only through maintaining a specific order and limiting conflict and antagonism so that consensus thrives. Similarly, neoliberal consensual politics explains why “the enemies of the past are today’s comrades“. Now, Nidaa Tounes and Ennahdha portray a political scene without enemies and conflict, so that on a macro level at least, the democratic “struggle” is almost invisible in a post-revolutionary setting.

“Manich Msamah” is reversing the very logic of neoliberal consensual politics in Tunisia. The campaign is making the democratic struggle visible. It is drawing, anew, the line between the “enemies” and “friends”, a distinction that has ceased to exist as a result of consensus. Furthermore, “Manich Msamah“ is reversing notions introduced by neoliberalism such as “control”, “order”, and “security first”. In neoliberal societies, social activists who aim to “resist” the established order or engage in debates through occupying public space and mobilization can be arrested, tortured, and silenced under pretext of security. “Security” here is what the system defines vaguely as a “state of exception“ (for example, a state of emergency). Security also legitimizes the use of force and silencing social protest. The Tunisian President’s initial security response to the social protest in El Kamour is the best example in this context.

In the case of “Manich Msamah”, the state of emergency was declared by social activists (and not the State) to mark the beginning of a war against corruption. On the movement’s Facebook page, we find a post in Arabic called “Popular State of Emergency“. Another campaign organized by “Manich Msamah” activists was “WANTED” when protestors pasted posters throughout the city featuring faces of corrupt state officials and calling for their trial.

All this considered, “Manich Msamah” appears to bring politics back to the scene. And by politics, I mean the opportunity offered by the ongoing democratic transition for dialogue, critique, debate and the right to organize in the public space. On the other hand, there are consensus and neoliberal measures of controlling and suppressing the social energy of resistance. This battle is, indeed, at the heart of the process of building a democratic culture in Tunisia. “Manich Msamah“ is not merely “disrupting the order” and the logic of neoliberal consensual politics, but also resisting a possible economic counterrevolution once corrupt businessmen are guaranteed amnesty.

Additionally, it is critical to remember that there are other “political” ways of addressing past economic and political violations through mechanisms of transitional justice. However, these mechanisms of ‘truth-telling, restitution, and judicial flexibility’ are now being “sabotaged“ by a “depoliticized” proposed bill that excludes debate and rejects criticism. The “Manich Msamah” campaign reveals that civil society is still, to an extent, a key player in the process of the democratic transition in Tunisia.

Squeezed between, on the one side, the IMF’s harsh neoliberal conditionalities which dictate how things should work, and on the other, local consensus narratives, “Manich Msamah” stands as a symbol of social resistance par excellence, a symbol that voices the popular demands of fighting corruption and blocking any attempt of soft economic counterrevolution.