El Kamour: Resistance in the south radicalizes despite intimidation

The El Kamour sit-in has lasted for more than three weeks. Set between an oil field and the main road connecting oil wells to the rest of the country, the sit-in, firmly contested by the government and the media, demands the creation of 3,000 jobs and a regional development fund. Negotiations came to an end on April 29 when sit-inners refused to accept the government’s proposal, including the immediate recruitment of 150 employees, and another 350 over the next three months, to work in oil companies, plus an increase (to 30 million dinars) in civil liability allocations. Sunday, May 7, several thousand residents gathered in Tataouine in support of the El Kamour sit-in against media slander and political pressures. Report. 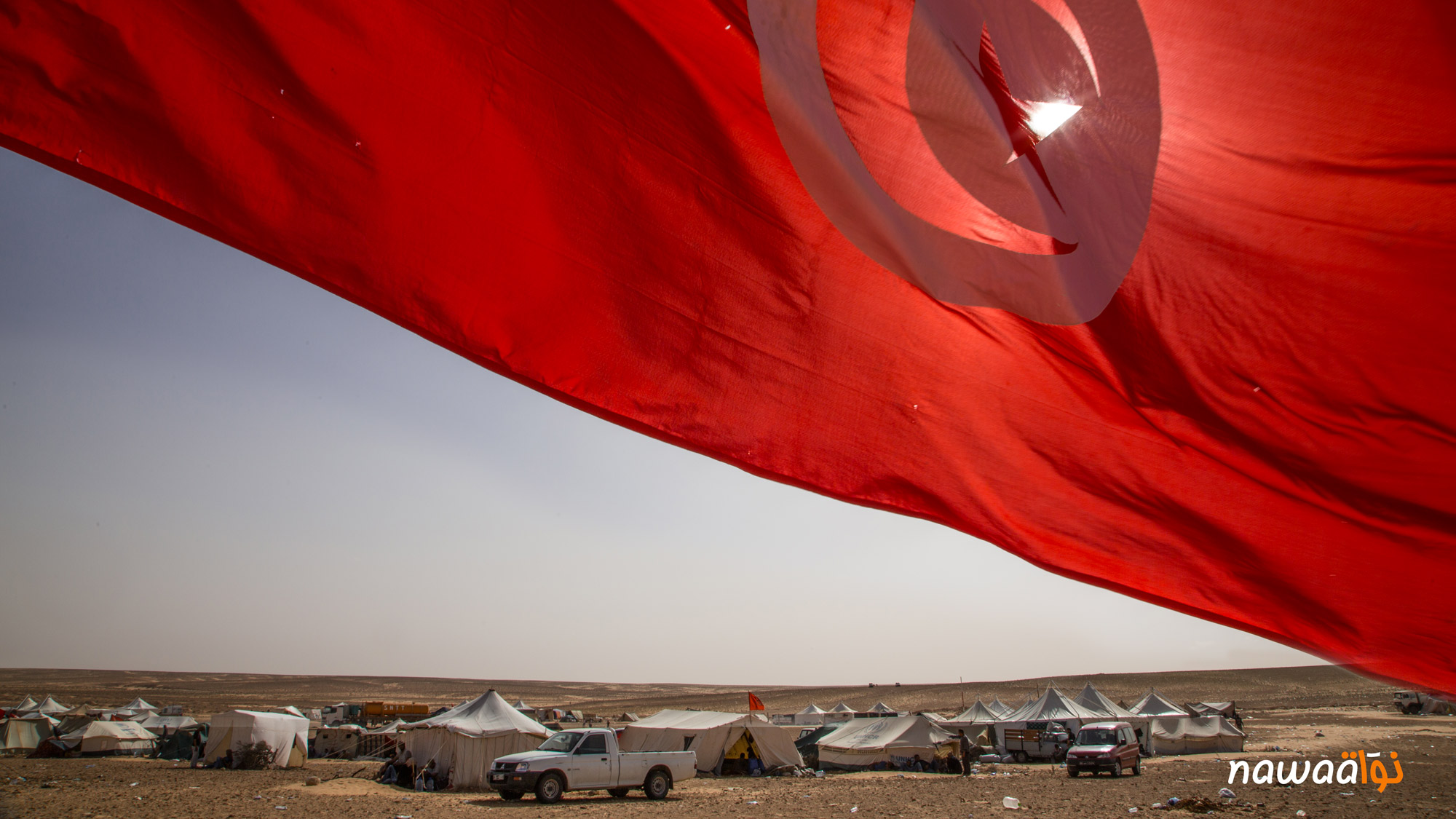 In the distance, the white tents of El Kamour evoke the No DAPL indigenous led movement in North Dakota against fossil-fuel colonialism. About a hundred kilometers from Tataouine, in the middle of nowhere and under a blazing sun, more than 50 large tents are set up around an immense national flag. Over rocky earth, we advance with difficulty towards the tanned faces of protestors, children of the south’s « fellagha. » Their slogan, « Resistance until victory, » dominates the scene, similar to sit-ins staged on confiscated lands in Africa and Latin America. Like Algerians, Bolivians, Ecuadorians and Peruvians before them, Tunisians of the south are taking their turn to ask questions long avoided by authorities and the media concerning natural resources: for whom? for what? and how? 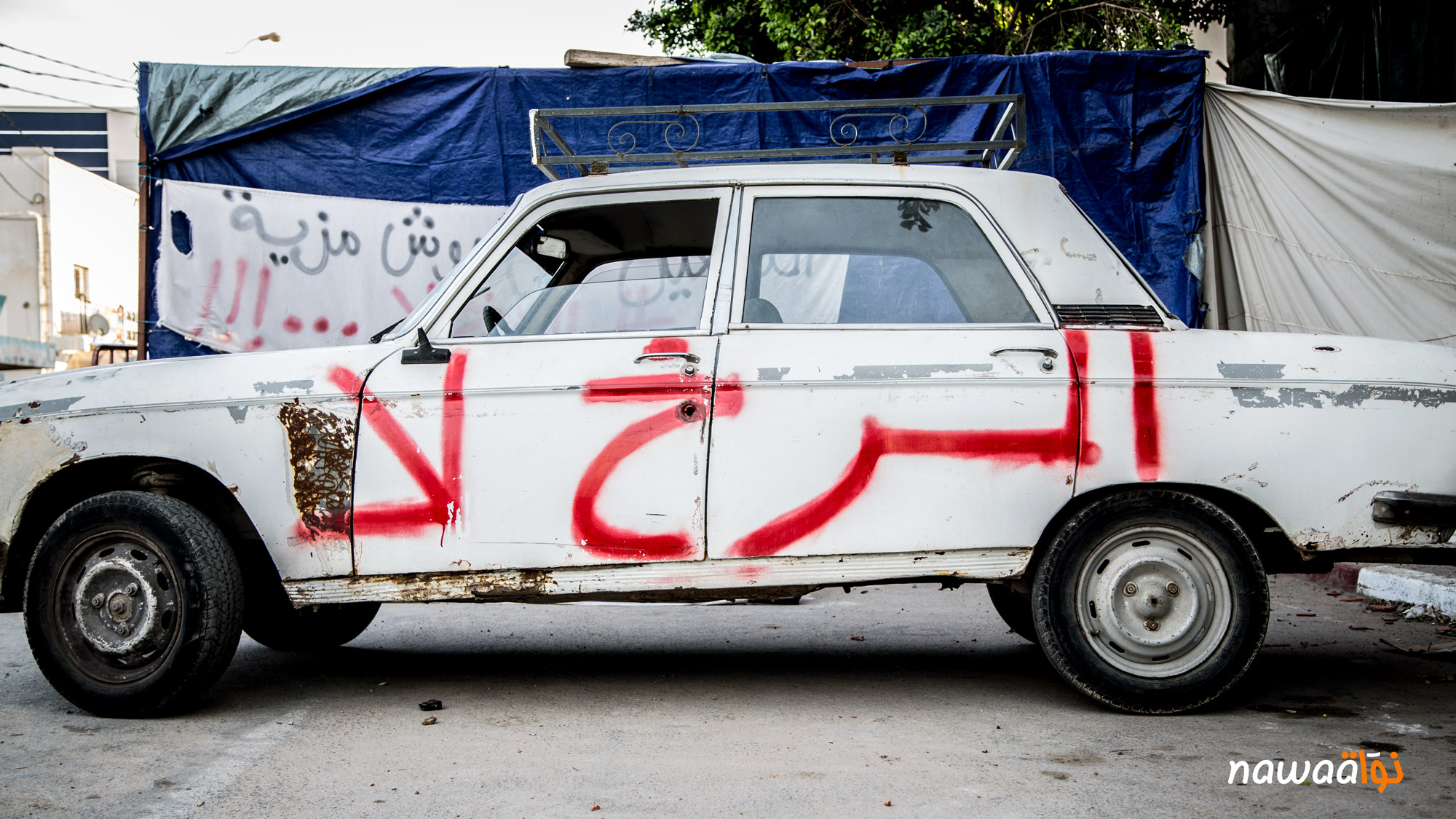 Thursday, May 4, it is the twelfth day of a sit-in at one of the key crossroads of Tunisia’s fossil-fuel industry. It all began on April 5, when employees of Tataouine’s oil companies held a general strike in support of 24 workers laid off by the Canadian oil company Winstar. After several rounds of negotations, the off-shore company refused to re-hire the workers and did not respond to residents’ calls for a serious social engagement in the region. « It was the straw that broke the camel’s back, » recalls 25 year-old Mahmoud Abdelnour, a merchant in Tataouine’s downtown. He was there on April 8 when a dozen unemployed youth set the wheels in motion for popular protest. After a modest sit-in downtown by a few dozen jobless youth, 64 sit-inners occupied the roads used by oil trucks. « Now, there are almost 1,200 sit-inners in El Kamour and just as many in the city, » Abdelnour confirmed. 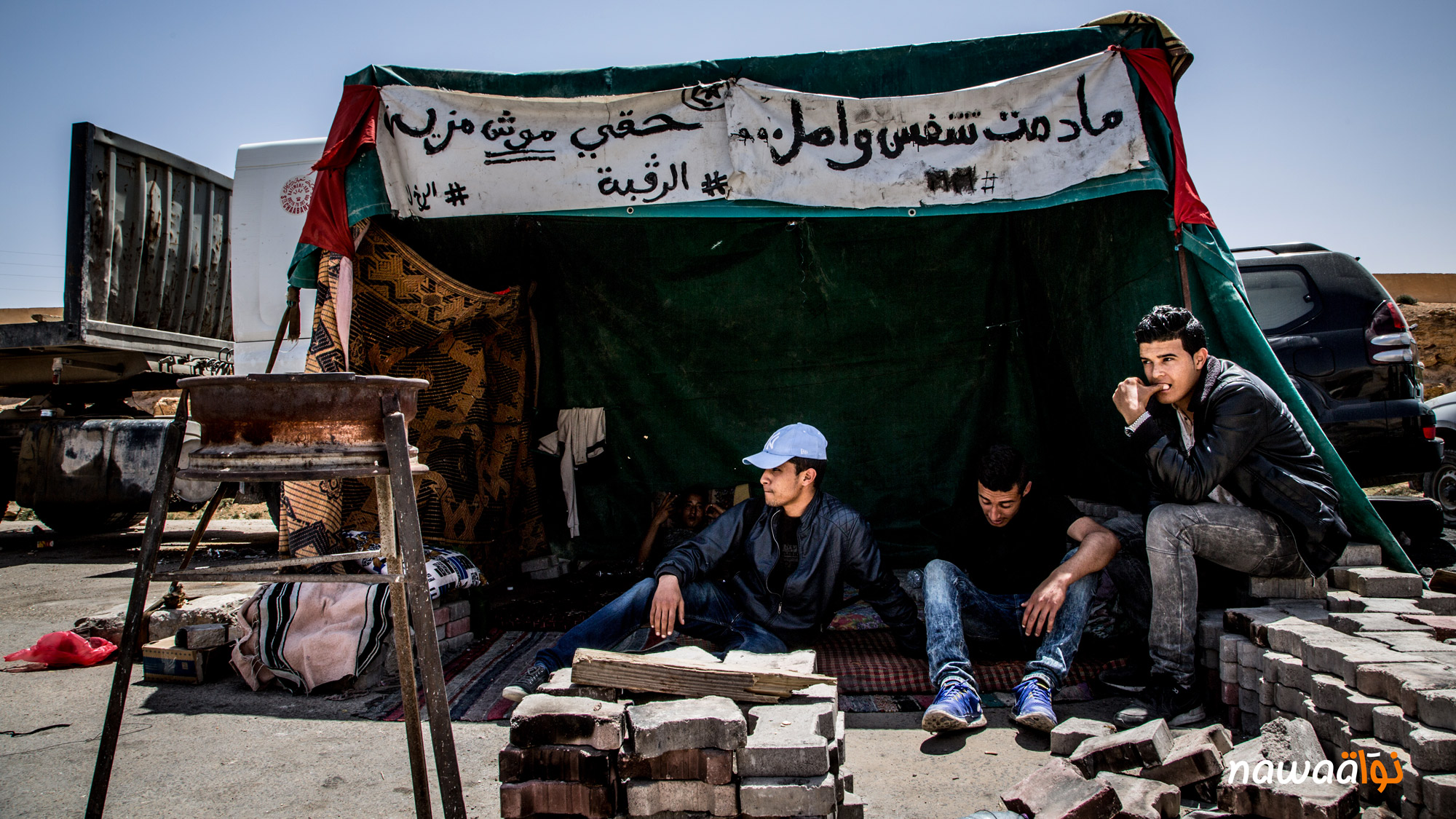 Abdelnour has closely followed the movement’s evolution. « This month we’ve been busy mobilizing and reflecting on what we are asking for, who we are asking, and with what means. From the very beginning, we thought of occupying El Kamour because we new that the North would only listen to us under pressure. But due to a lack of means, the sit-in was delayed until April 26. After consulting with residents, the unemployed [protesters] decided to move into action, » explains Abdelnour, who is responsible for collecting money and food supplies for the sit-in, along with others in Tatatouine, Tunis and overseas who support the movement. 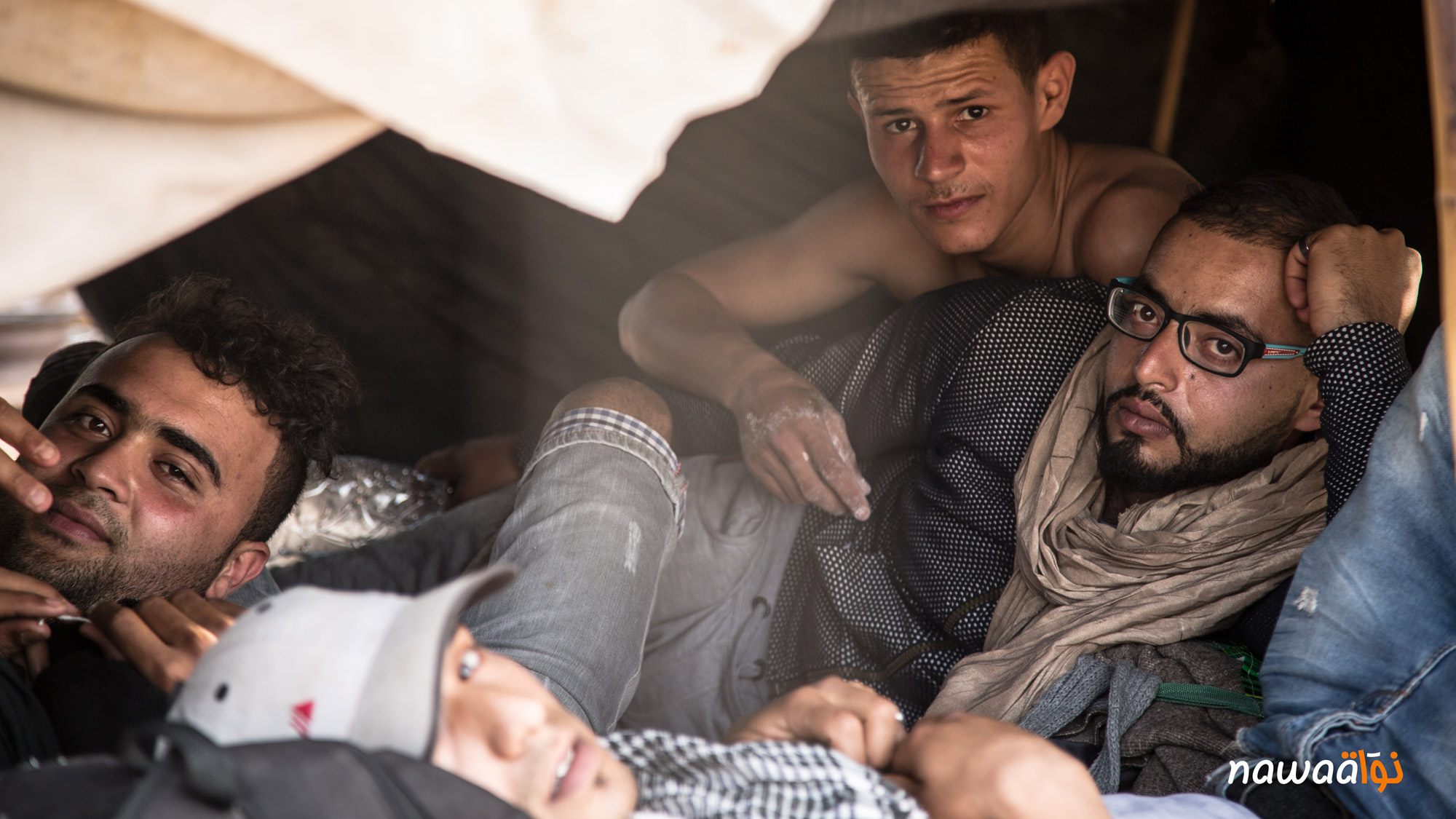 Around a large water tank, a group of sit-inners has sought respite from the sun’s penetrating rays. Some are washing laundry, others talking about the latest news from the city. « Negotiations with the Minister of Employment ended on Saturday, April 29. We’re in the midst of deciding the next steps, » explains Saddem Katouch, age 26, who has a diploma in welding and has been unemployed for six years. Lack of experience, the large number of protesters and the diversity of expectations has not prevented the El Kamour sit-in from showing an unfaltering discipline. Protesters elected coordinators who in turn elected a spokesperson. Each decision is discussed in assemblies where coordinators relay the proposals of sit-inners. Every decision is made following a vote at each level of representation, and then at the level of the coordination team. « We try to remain transparent and to respect the will of each sit-inner. This is possible through voting and consultation. We spend all of our time going over the the details of our demands and solutions that we propose to government, » explains Khelifa Bouhaouach, 26 years old and a member of the coordinating team. 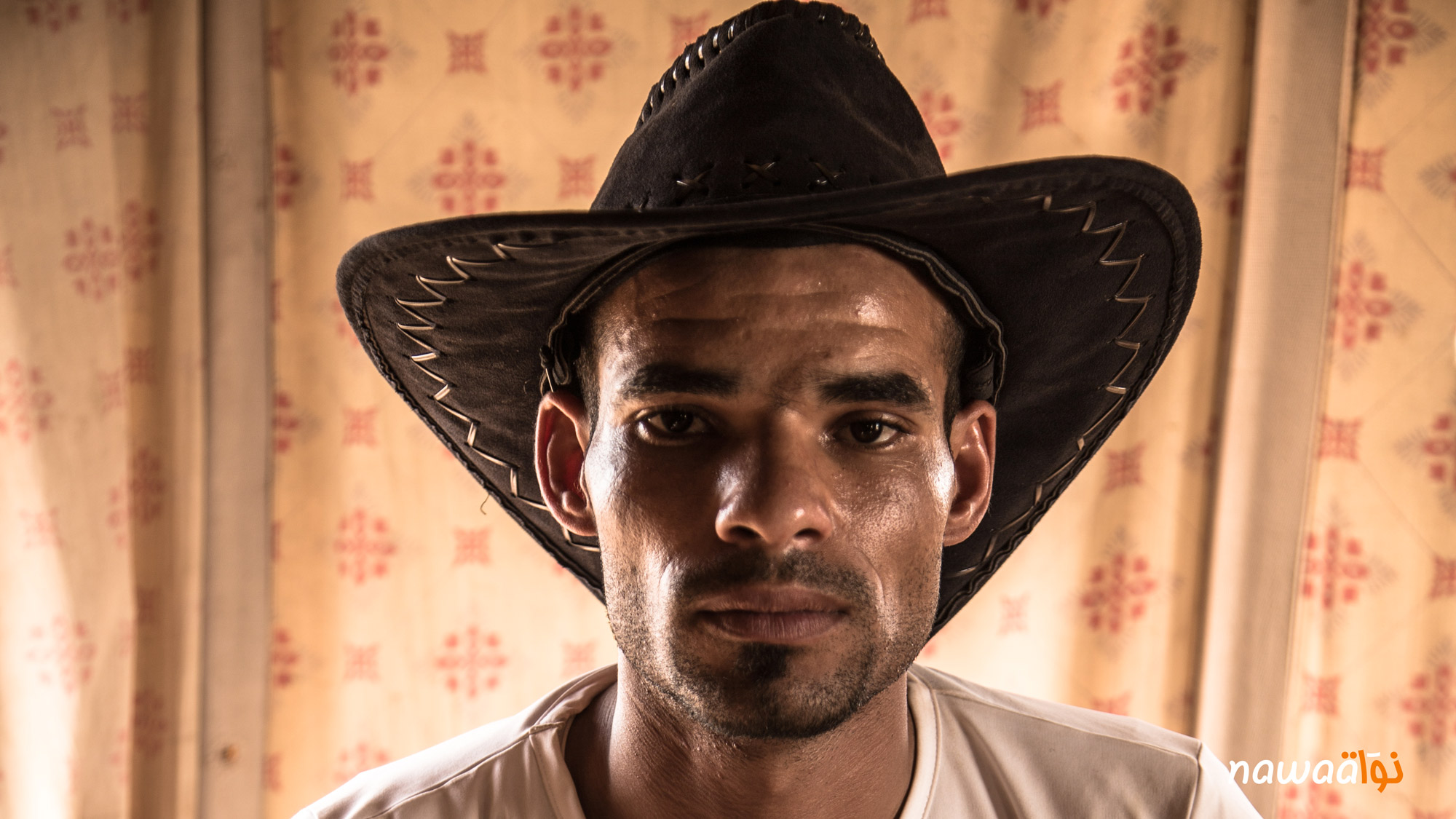 In the sit-in area, Fethi Boufalegha, 22 years old, intervenes, proposing tea under the tent. « Everything you’ve seen in Tataouine, from the roads, schools, post offices, administrations, to the soccer field or the public market, everything was built by residents themselves. Our parents and our brothers, workers overseas, have been bringing in income for decades. It’s not money we are demanding, but development. Oil, salt, phosphate, water and all natural resources must have a return for Tunisia, but we’re convinced that our riches have been confiscated by a national elite corrupted by foreign capital, » explains Boufalegha. Like many of his comrades, he is undergoing technical training in oil exploration. In 2012, he received a diploma in pumping and a driving permit for tractor-trailers. « Youth here have only one ambition: to work in the desert [oil companies], but the decision-makers prefer to recruit foreigners or graduates from Sfax, Tunis, and the big cities. For thousands of positions, only a few hundred are given to young people from Tataouine, » says 26 year-old Abdelhalim Katouch.

Under the tent, Boufalegha and his friends sip tea and share cigarettes freshly arrived from the city. Their conversation concerns negotiations and lessons to be drawn from past errors. « We cannot leave anything to chance! » says one young man. « We have to write down all details and not sign until the agreement is clear and binding. » Following the assassination of Mohamed Brahmi in 2013, a sit-in « Massir » was held. « After months of our occupying the square downtown, they tried to fool us with a dozen temporary posts in a field belonging to Bouchamaoui. The contracts, which did not include social benefits, were up after six months, » explains Boufalegha, before adding that « the barons of the Nobel Prize will make no more decisions with regards to our demands. Neither civil society, nor political parties, nor the UGTT will negotiate in our place, » he exclaims. 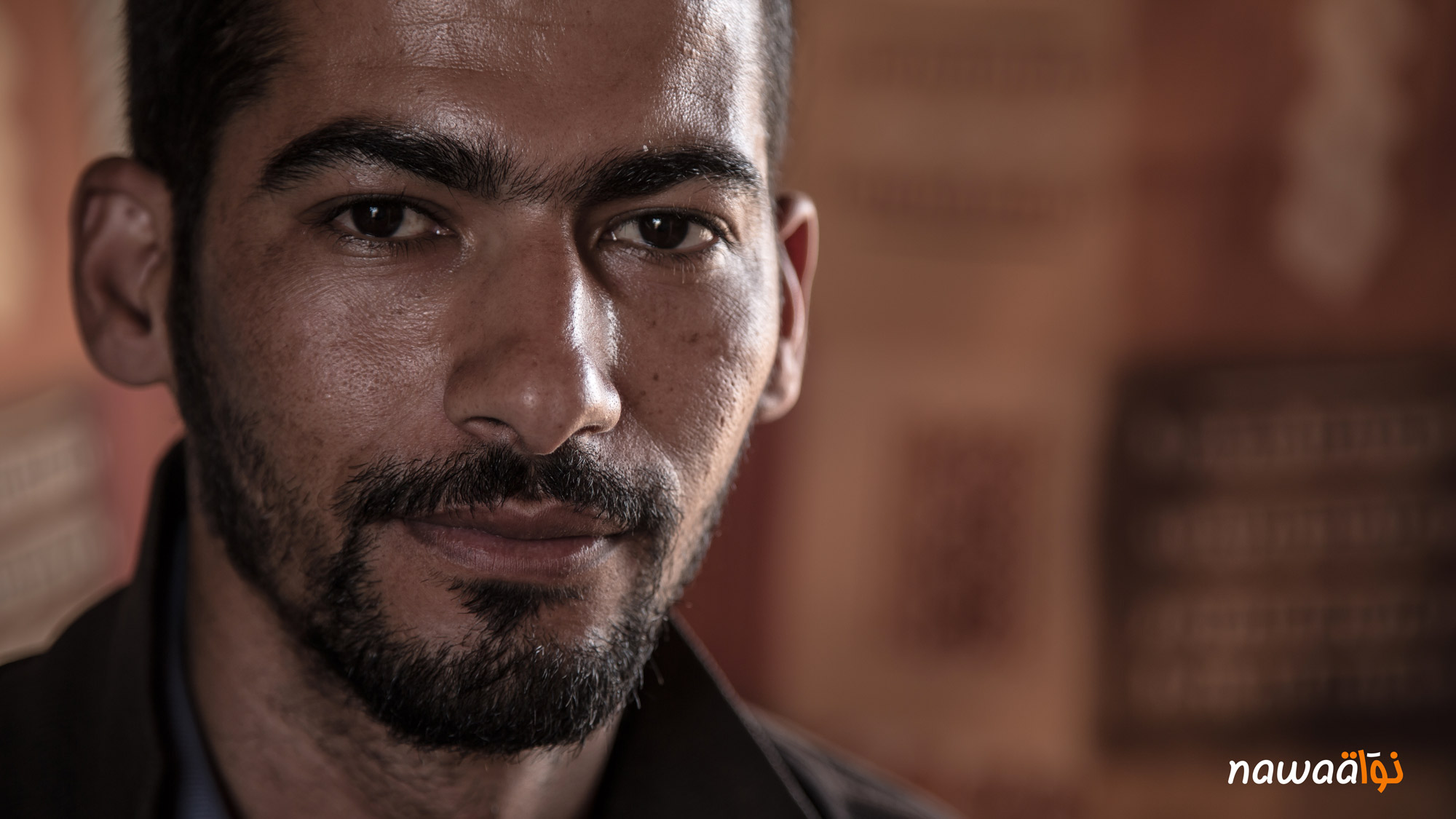 Evening approaches and as air the begins to cool, so does the burning sand. Two shirtless youth prepare dinner, while others proceed with preparations in a coordination meeting. « The people of El Kamour are aware of the stakes, both in terms of security and politics. We have infallible internal rules of procedure and we divide up the tasks of keeping watch and monitoring which we ensure day and night to protect the sit-in and the the country. We document all of the contributions received and our accounting is transparent. We are here as peaceful and patriotic protesters, in order to improve the standard of living for all Tunisians, » affirms Bouhaouach, before Tarek Hadded adds: « with the support of residents all over the south and elsewhere, the sit-inners will not retreat. Not only will the sit-in continue but we will even advance towards the desert. »

In the days following the speech given by Beji Caid Essebsi, the will of the sit-inners remains unchanged. And since the government appears determined to fulfill a dialogue of the deaf, the resistance continues to radicalize.

This video was supported by the Rosa Luxemburg Stiftung with funds from the German Federal Ministry for Economic Development and Cooperation
The content of this publication is the sole responsibility of Nawaat Association and does not necessarily reflect a position of RLS.
Share :FacebookTweetEmail
Rights