The body in cinema was the theme of the 17th edition of Cinéma de la Paix? organized by the Tunisian Federation of Film Clubs (Fédération Tunisienne des Ciné-Club, FTCC) in Tunis. March 8-12, at the Quatrième Art theater downtown, cinephiles attended eight screenings and debates in the presence of Moroccan director Said Khallaf, (A Mile in my Shoes), and Lebanese director Maher Abi Samra (A Maid for Each). Film critics, professors, directors, students, FTCC members old and new filled café tables and spilled out into the street, clutching programs and caricatures sketched out by an on-site cartoonist. On Sunday evening, a musical performance by Pardon My French marked the end of the festival, five days of reflections and discussions on what the body in cinema reveals about society.

Not a single one of the characters who animate Ismail Bahri’s Foyer appears during the 32-minute film. Bahri had set up his camera in the midst of a busy street in Tunis; centimeters in front of the lense he placed small white piece of paper, suspended in the air so that it moved with the wind, though not enough to reveal the scenery. In the movie theater, the spectator gazes at a screen illuminated by a sunlight filtered through a sheet of paper, feels himself surrounded by voices and noises of the street, car horns and engines, passers-by and those who stop, curious about the cameraman and his experiment. The viewer must re-tune his senses and adapt to a landscape formed of sounds: the questions of an amateur photographer who, minimally prompted by Bahri, searches for the symbolism of the wind; two children who, upon peering into the camera report that they see « nothing »; a man who describes artists and intellectuals as narcissistic and disconnected from the people they portray in their work; a police officer who, assuming that the cameraman has filmed the police station, brings him in for questioning. The camera is still recording as Bahri follows the officer into the station, where he is sternly questioned about his project and hands over his equipment for inspection. As Bahri explains his experiment and the officers are reassured, their tone quickly changes; they learn that the French-Tunisian artist teaches in France, and send him warmly off, grateful that Bahri is promoting a good image of Tunisia. 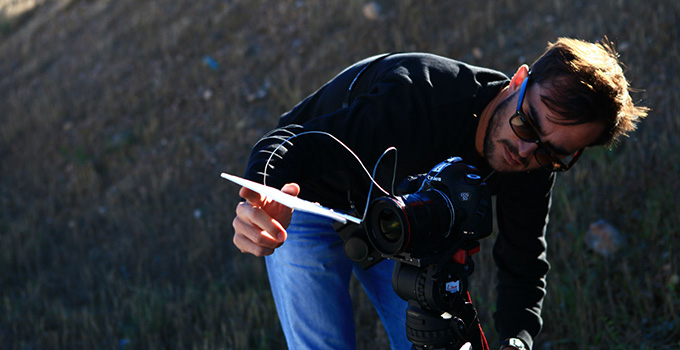 During the debate that followed, the audience’s response to Bahri’s experiment reflected the reactions of the passers-by in his film. An older man in the audience admitted being « completely thrown-off » by the director’s image-less approach, and observed that the way they were drawn to the camera reminded him of how people once gathered around the radio for their favorite shows; after several individuals made reference to the « white screen, » one woman commented that she had seen anything but white, noting the ever-changing shadows and colors created by the wind. Another spectator expressed how the film’s spontaneous protagonists and scenery of sounds rendered a suprisingly colorful landscape which she called « a beautiful portrait of Tunisia. »

That domestic workers in Lebanon, the subject of Maher Abi Samra’s documentary A Maid for Each, [Makhdoumin] do not themselves appear on screen is, in contrast, a striking, unsettling absence. Abi Samra offers a glimpse into the houses where they work, the beds and nook-like rooms where they sleep, but also into the commercial transactions that determine their placement. In one of Beirut’s hundreds of agencies, families leaf through catalogues of young women, pointing to photographs and chatting about domestic workers they remember, not by name, but by nationality, physical characteristics, demeanor. Handled in these agencies like commodities—shipped, purchased, and, if desired, returned and replaced—the workers are as invisible in Abi Samra’s film as they are made to be in the service of their employers. Scenes filmed inside the agency are interspersed with night scenes of the city: where the camera pans over the lighted windows of apartment building after apartment building as one employer after another describes the work of his or her housekeeper, shares anecdotes and memories that convey varying degrees of guilt, denial, inhumanity. Abi Samra, who was present for the screening in Tunis, responded to impassioned critiques regarding the absence of workers in the documentary, standing by his choice with the same solemn firmness he assumed his own part of a system in which both society and government are complicit.

« I don’t believe we have liberated our imaginations and bodies »

Before the last film screenings on Saturday afternoon, professors Ikbal Zalila, Fethi Doghri, and director Mounir Baaziz animated a discussion on « New bodies in Tunisian cinema. » Zalila observed the emergence of two trends in this context since 2011; In the case of Fellaga (Rafik Omrani, 2011) and Babylon (Ala Eddine Slim, Ismael and Youssef Chebbi, 2012), for instance, he described the body as the expression of a community, as representative of the masses. Secondly, he referred to the exhibition or « extreme singularization » of the body as an autoportrait, such as in Hecho en casa (Belhassen Handous, 2013). He also made note of the body as a « medium of history, » as in Tarek Ibrahim’s Protectorat 1881 (2016).

Focusing on the relationship between body and camera, Fethi Doghri explained that, unlike on stage, the body before the camera is not free, but dependent upon the director. He alluded to early films such as Sejnane (Abdellatif Ben Ammar, 1974), in which the director’s decision to show the body in certain environments « without their being any direct link to the story, » was an aesthetic and historical reference to a period when « there was time to live… The bodies told of a certain dynamism… not in a political sense, but a cinematographic sense. »

Director Mounir Baaziz emphasized how the public perceives the body in film. Pointing to Man of Ashes (Nouri Bouzid, 1986) in particular but also Halfaouine (Férid Boughedir, 1990) as marking an important turning point, « the apparent liberation of the body, » he described the impact of these films as « one step towards nudity, and one step backwords in terms of questioning society’s taboos and perceptions of the body. » He recalls Tunisian actors whose roles as homosexuals or nudity on screen had spoiled their careers in Tunisia, so that left the country to pursue their work. He recalled working with actors who had no misgivings about exposing their bodies in front of the camera, and that the problem came when the film was presented to a reticent public. He defined these experiences as social discoveries, revelations about a society that accepts nudity in foreign films, « but its own body, that remains forbidden. » He concluded that « Since January 14, I don’t believe we have liberated our imaginations and our bodies. »