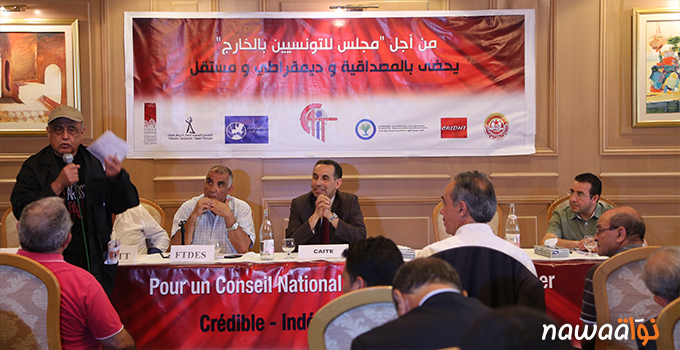 In an “open-door” discussion held in parliament on Saturday, ARP deputies returned to their examination of Draft Law 051/2015 concerning the creation of a National Council for Tunisians Residing Abroad. Mohamed Jalel Ghedira, president of the Commission on Armed Forces in charge of reviewing the draft law, indicated that commission members will consider civil society’s propositions before voting on the measure in late July.

⬆︎ Documentary in Arabic with English subtitles available via the YouTube subtitle interface.

Approved in July 2015, Draft Law 051/2015 designates an authoritative body to represent the 1,325,690 Tunisians (more than 10% of the population) who live outside the country. Last Thursday, in anticipation of their participation in the weekend’s parliamentary session, representatives of the Coordination of Associations for Immigration and Tunisians Abroad (CAITE) gathered for a press conference in Tunis to articulate their long-standing demands for a National Council.

Formed of twenty-five independent Tunisian associations in France, Italy, Belgium, Switzerland, and Sweden, CAITE presents itself as a “democratic force” in the creation of a representative body for Tunisian immigrants. In a declaration published on May 9, CAITE spelled out its criticisms of the draft law which the association “cannot accept in its present version.” In spite of past communications with the Ministry of Social Affairs (the governmental institution with which the Council is affiliated), the association finds that the proposed draft law does not reflect a clear agreement on a “truly independent and representative authority.”

Calling on the Ministry to observe and apply certain principles in the establishment of the National Council, CAITE insists on the “consultative and therefore pluralistic nature of this authority in order to avoid political tensions which could produce an over-representation of one or another political or parliamentary force.” Specifically, the association proposes the designation of one ARP representative per parliamentary group in order to avoid “any conflict of interest or legitimacy.” Concerning representation from immigration organizations, number and repartition of members should, CAITE elaborates, be based on the number of Tunisians residing in the host country as per the 2014 Census, which indicates that more than half (54%) of Tunisians abroad are living in France.

If this Council is to be implemented as is, we will not be a part of it

Among CAITE’s member organizations is the Fédération des Tunisiens pour une citoyenneté des deux rives (FTCR). Based in Paris, the FTCR is affiliated with the oldest association of Tunisian immigrants, the Tunisian Immigrant Workers Union (UTIT), established in 1901. At Thursday’s press conference, FTCR President Moncef Guedouar evoked the long history between Tunisia and France. “Before independence,” he said, “the first association of immigrants was created at the beginning of the 20th century in Paris. We have fought ever since–this is not new for us.” He described “this famous council” which has been in demand for the past three decades. In 1988, President Ben Ali “promised us the moon,” but the initiative was abandoned. In 2011, it was revived under Secretary of State for Immigration Houcine Jeziri, but in subsequent governments “each majority shifts directions according to its interests.”

If you create an authority that has no independence, no right to make decisions, where the director  appointed by the Minister is the one who makes decisions for the Council, of what use will it be? …
If this Council is to be implemented as is, we will not be a part of it. We will create our own council, our own spaces.Moncef Guedouar, FTCR President